Growing up, our family went to the beach at least a dozen times a year.  I mean, we lived in Florida, of course we went to the beach.  Unfortunately, living in what is probably the most "landlocked" city in the state, the closest beach was 90 minutes away.  Of course, since this was the closest, it seemed everyone from our hometown flocked to the exact same ten mile stretch of beach every weekend.  Since moving to Philly, I equate this phenomenon to Atlantic City- it seems it's a weekend extension of Philly- easiest to get to and full of fun stuff.  This extension also relates to restaurants- Philly food writers discuss the eats in AC, and Philly restaurateurs extend their business to the beaches.  Jose Garces has a huge collection of restaurants in Revel, one of the newest casinos on the beach. 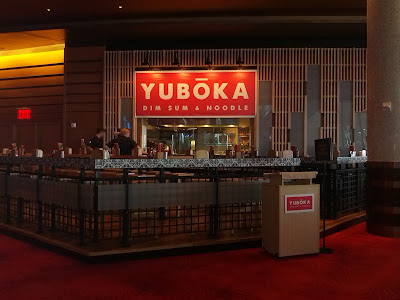 Yuboka (sorry, no idea how to put that line over the O) is one of the newest to join the group, as a dim sum and noodle bar adjacent to the casino.  Kind of a great idea- both counter and waiter service are available, making it a quick stop if you're in a hurry to get back to the slots.  We sat at one of the communal tables and started the meal with a few items off the dim sum menu.  The Shanghai soup dumplings come five to an order, with a thick wrapper enrobing a mouthful of broth and some spiced ground meat (pork or chicken?).  At $9, they're about four times the price you'd pay in Chinatown-- and not quite as good.

The chieken dumplings (5 for $8) were similar- by no means the worst dumplings I've ever had, but rather middle-of-the-road for the high price.  Sure, we're sitting in a nice, brand new casino, so I expect to pay higher prices, but I also expect high quality eats.  The BBQ pork ribs were by far my favorite of the three items (5 ribs for $9).  Chinese spare ribs tend to be a little dry for me, but these were meaty and heavily sauced.  Just a single rib provided plenty of meat for me, and strongly flavored with Chinese five spice (cinnamon was definitely in there).  Unique and super flavorful- and maybe even worth the price.

We each ordered an "entree," although the noodle based dishes come in various sizes, making it somewhat difficult to determine what you'll get.  I ordered the cold sesame noodles, a small pile of soft, thin noodles in a tahini based sauce ($9).  Shreds of carrot, pepper, cucumber and mint bulked up the bowl and provided some much needed crunch, but also watered down the already muted flavors of the sauce.  A good squirt of sriracha helped, but.. I could easily make this at home. 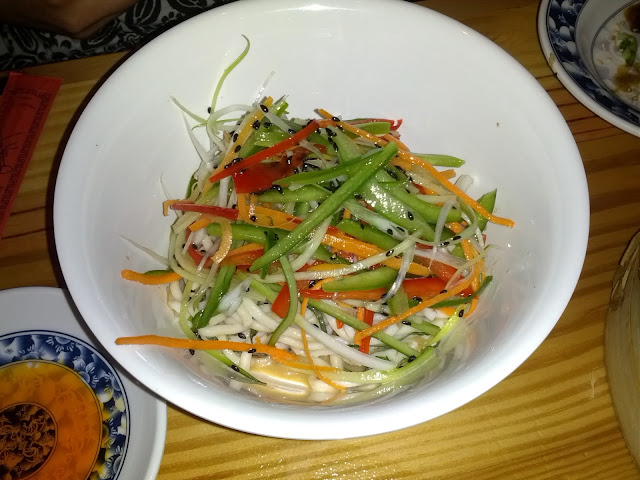 The biggest bang for your buck come in the form of noodle soups.  We tried the Duck Noodle Soup, a huge bowl of thick udon noodles, roast peking duck (complete with skin), and tons of vegetables- mushrooms, baby bok choy, and cabbage, among others ($15).  I was impressed, but others decided the simple flavors (and larger portions) at Nan Zhou were far superior. 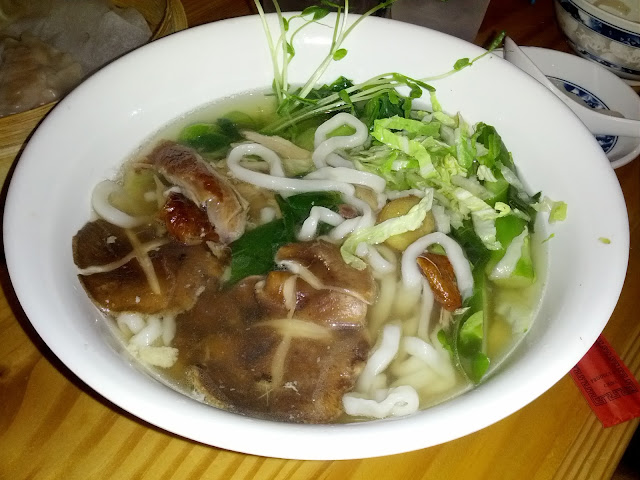 We also tried the lamb bun (spicy stir fried ground lamb and veggies stuffed in a strange, cracker-like bun), breakfast congee (egg, pork belly, and congee accoutrements over a pile of extremely salty rice porridge), and the "Mouth Watering Cold Chicken."  See.. if you're going to specifically name your menu item "mouth watering," you should probably amp up the flavors.  Instead, the cubed cold chicken was bland, with the suggested side order of white rice obviously offering no support (chicken: $7; rice: $3). It seems Garces may be catering to a different audience in AC, one with much less discerning tastebuds. 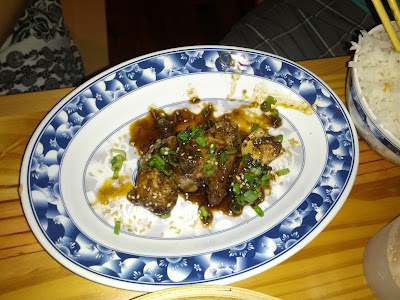 With other Garces alternatives of a mini-Distrito cantina, a huge Village Whiskey (that takes reservations!), and a full-sized Amada, all within the same casino, we agreed we wouldn't recommend Yuboka over these other carefully curated options.  As the only spot unique to Atlantic City, his move into the Asian arena doesn't do him too many favors.