Earlier this week, we had the fantastic opportunity to dine at Talula's Table out in Kennett Square.  The small space actually plays a daytime role as a market, selling upscale artisan food items like jams, pickles, meats, cheeses, pastas, etc.  Someone in our group used the analogy "like a really nice Cracker Barrel" but I preferred my own "country DiBruno Brothers."  In the evenings, one lucky group of 10 to 12 can stake claim to the Farm Table centered in the shop- but beware, reservations require a years advance notice. More info here. 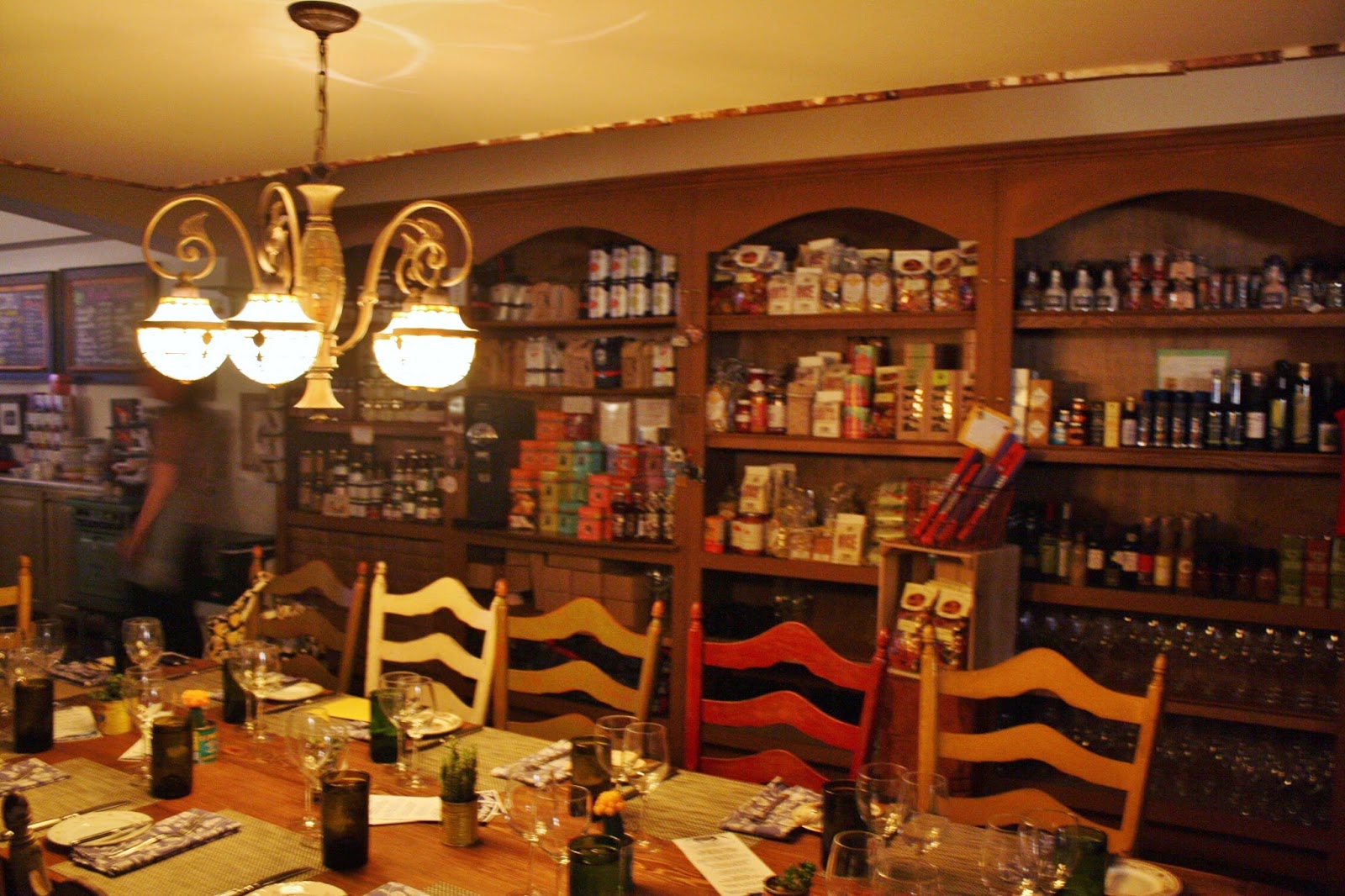 The only other dining option is the "secret" chef's table, which requires a bit of an "in" to reserve, allowing a bit more flexibility with getting a reservation. Luckily we have a good friend in the biz, so we all agreed to make a (looong) trip out to Kennett Square to celebrate a birthday.  Although we arrived a few minutes late, the Talula's staff still allowed us some time to peruse the store.

Before dinner started, we were brought a number of hors d'oeuvres.  First up was a bluefish salad served on a fried tater tot with a little pickled onion.  Probably one of the better tots I've ever consumed. 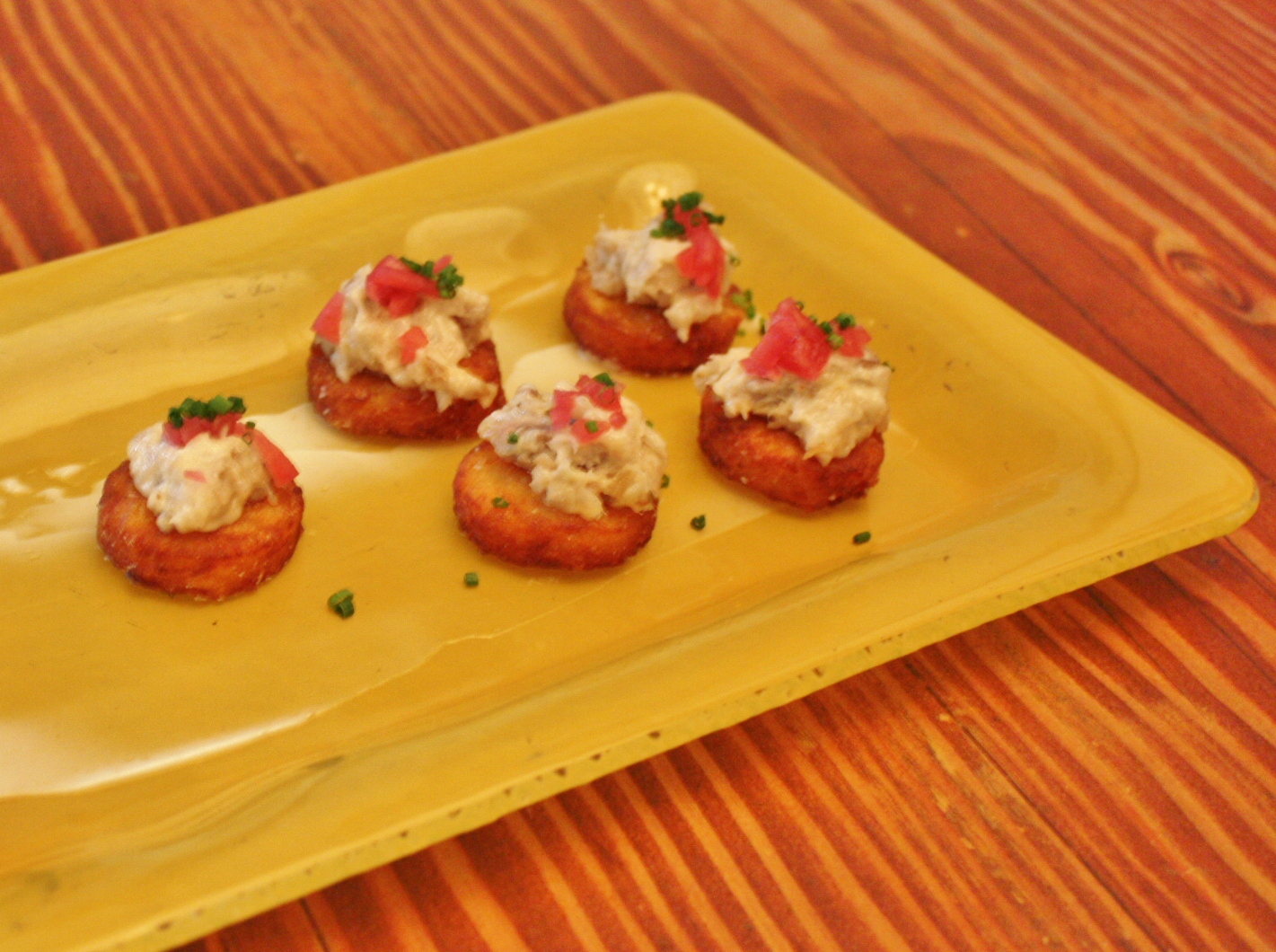 However, the lamb confit with mayo and arugula on a rosemary puff was a bigger hit- the slightly game-y but perfectly tender lamb along with spicy greens and an airy bun created a wonderful sensory experience. 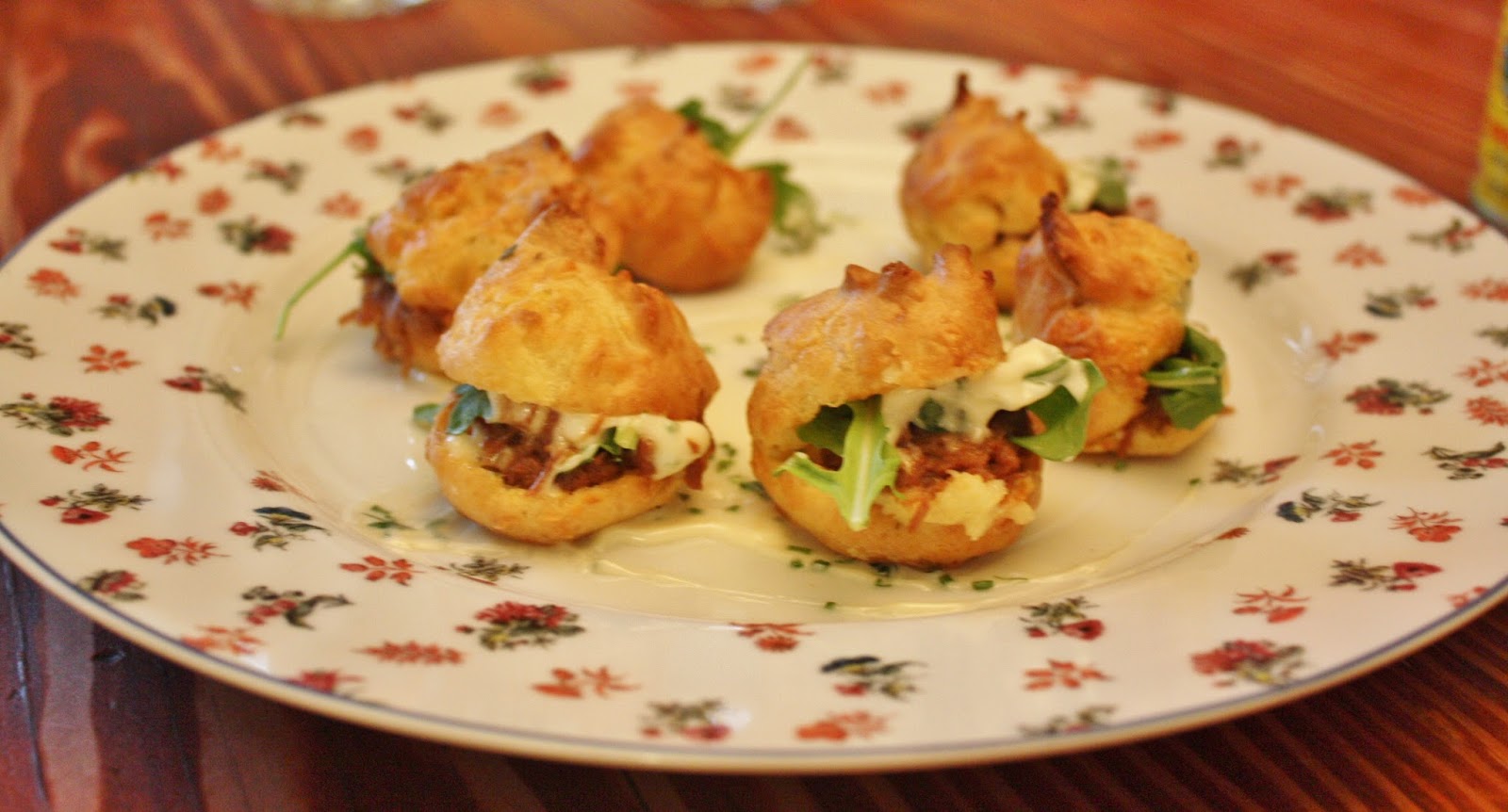 Things took another turn for the better with a chilled and pureed cauliflower soup complimented by thinly sliced cucumber and a pile of salmon roe.  I'm not used to a caviar with such large individual size- biting into them created a really unique feeling that I'd almost compare to chewing up a fish oil capsule.  Slightly overwhelmingly salty, but this was well contrasted by the subtle soup. 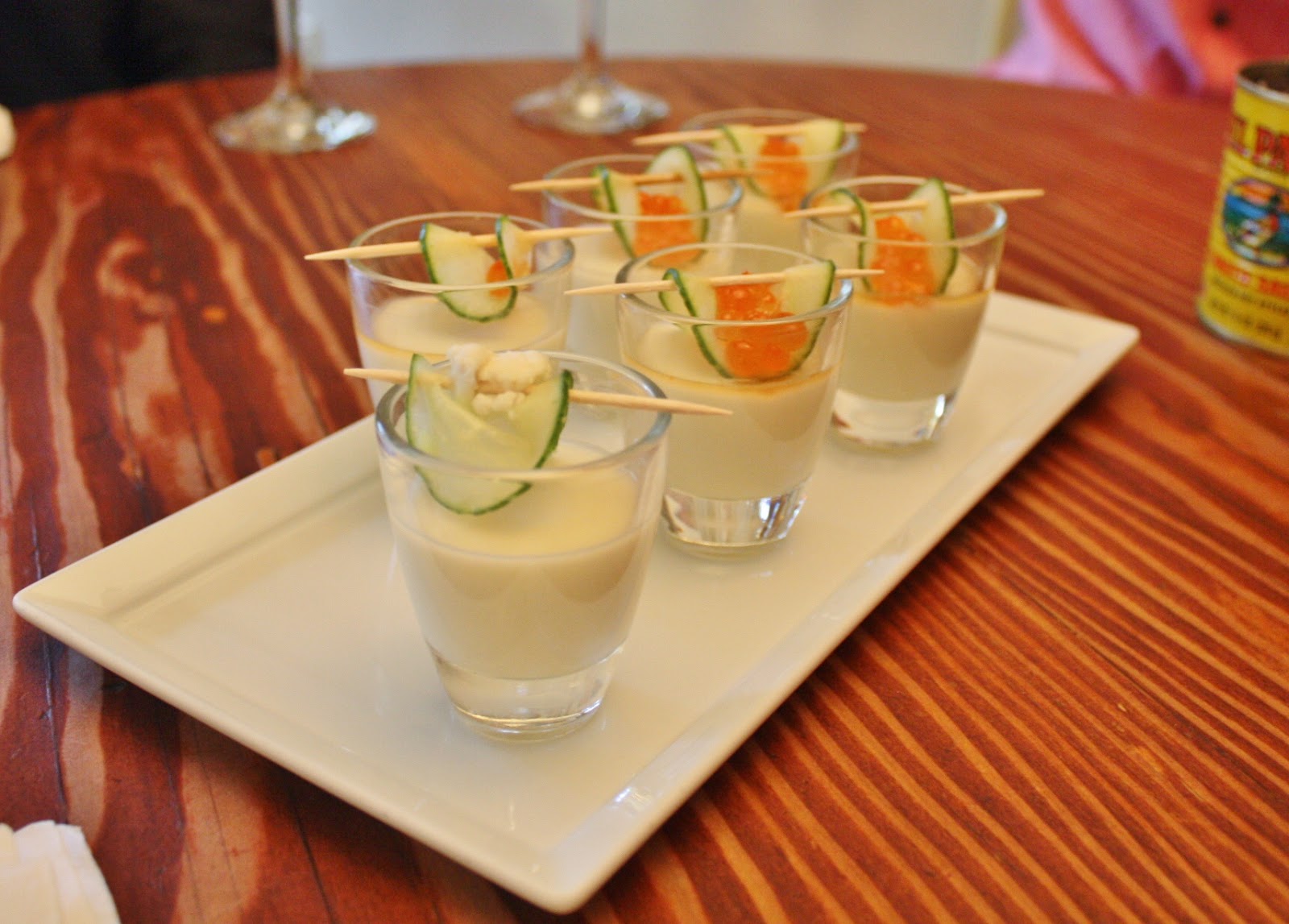 At this point we were ushered back into the kitchen, where we took over a large, hightop square table that definitely continued the rustic vibe from the main room into the more sterile, stainless steel environment of the cook space.  We perused the menu and prepared ourselves mentally for the next eight courses, which were based on an "early summer" theme.

The fun part about being at the Chef's Table was being able to watch some of the cooking and all of the plating action.  A lot of the components are prepared ahead  of time- with only one chef and one guy helping with the plating, this is clearly very important.

The first course actually ended up being my favorite of the meal, which set a really high standard for the rest of the dishes. A small slice of sourdough toast is spread with a generous amount of whipped butter brightened by Old Bay seasoning. Underneath lay the lightest, butteriest mini-omelet that seriously just melted against the edge of a fork.  Chunks of Chesapeake blue crab were pocketed by the eggs, and the whole thing was topped by a little herb salad that included parsley and chives. 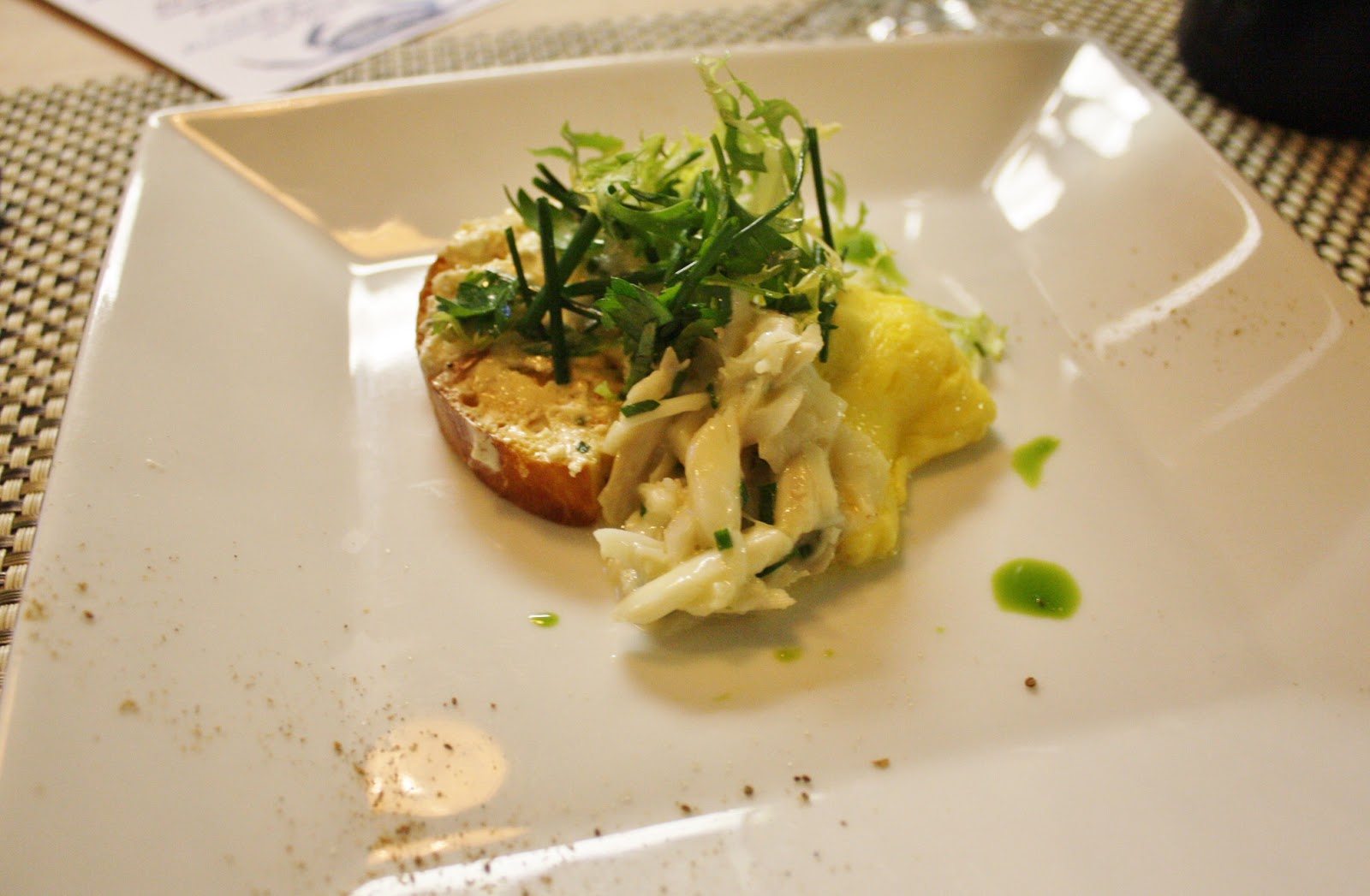 Between the first and second course, we were served the first round of bread- another popover type roll identical to the one used for the lamb sandwich hors d'oeuvres.  A great compliment to the lightness of the crab omelet as well as the ensuing foie gras. 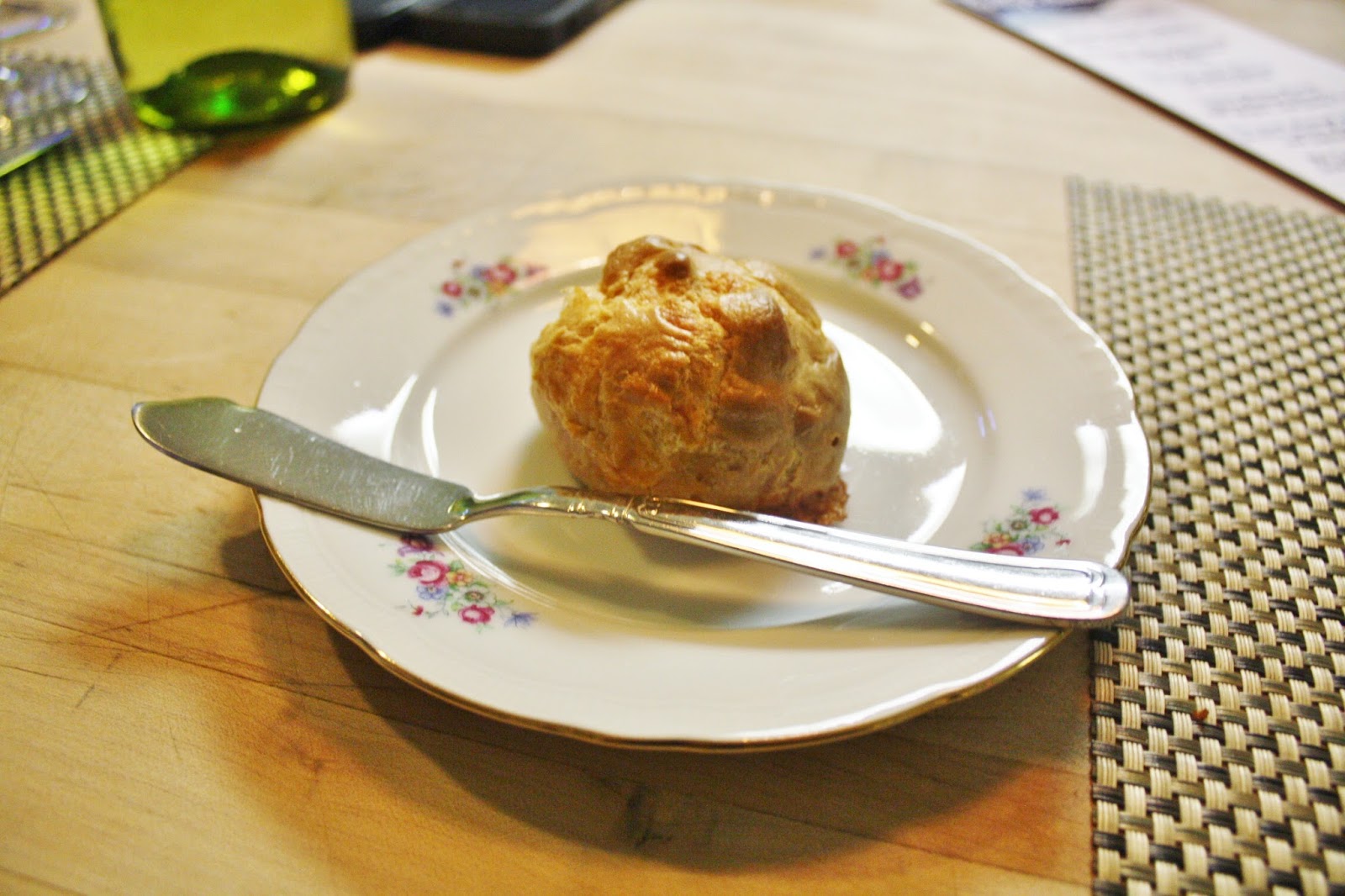 The foie gras course is traditional for a multi-course meal, but the way it was served here was anything but traditional.  A thick slice of a foie terrine with a touch of surrounding gelatin is seared and plated with pickled rhubarb, a turnip puree, and additional pieces of turnip and radish.  This is finished with a touch of pork jus.  I can't say the flavors were my favorite pairing for the intensity of the foie, but I commend the use of seasonal vegetables and a creative approach. 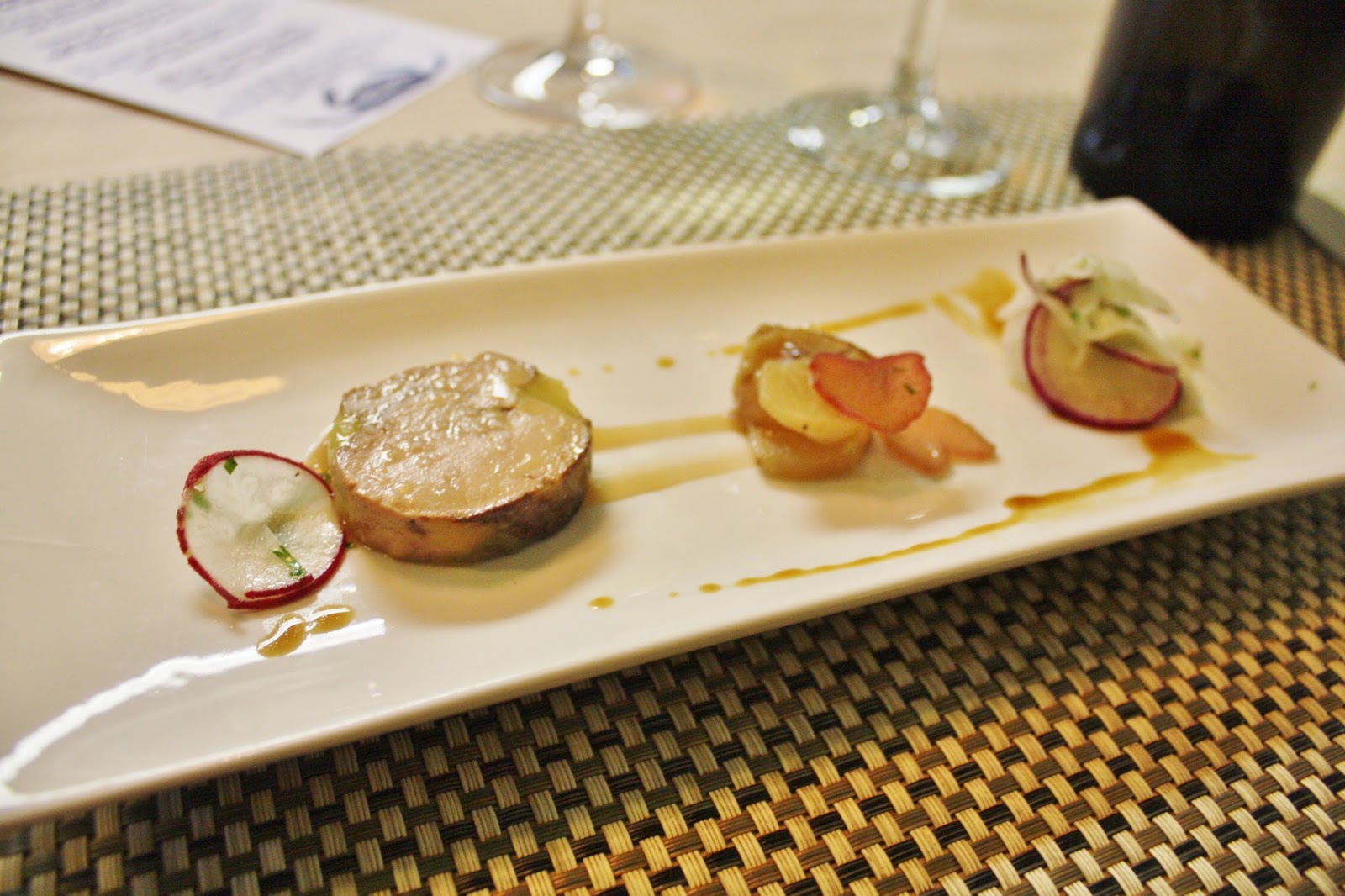 For the remainder of the meal, we were provided with a basket of mixed breads including pretzel rolls, sourdough, a multi-grain, and a cheddar-filled country white.  I tried a few between courses, preferring to use it as more of a tasty palate cleanser than to pair with the rest of the food. 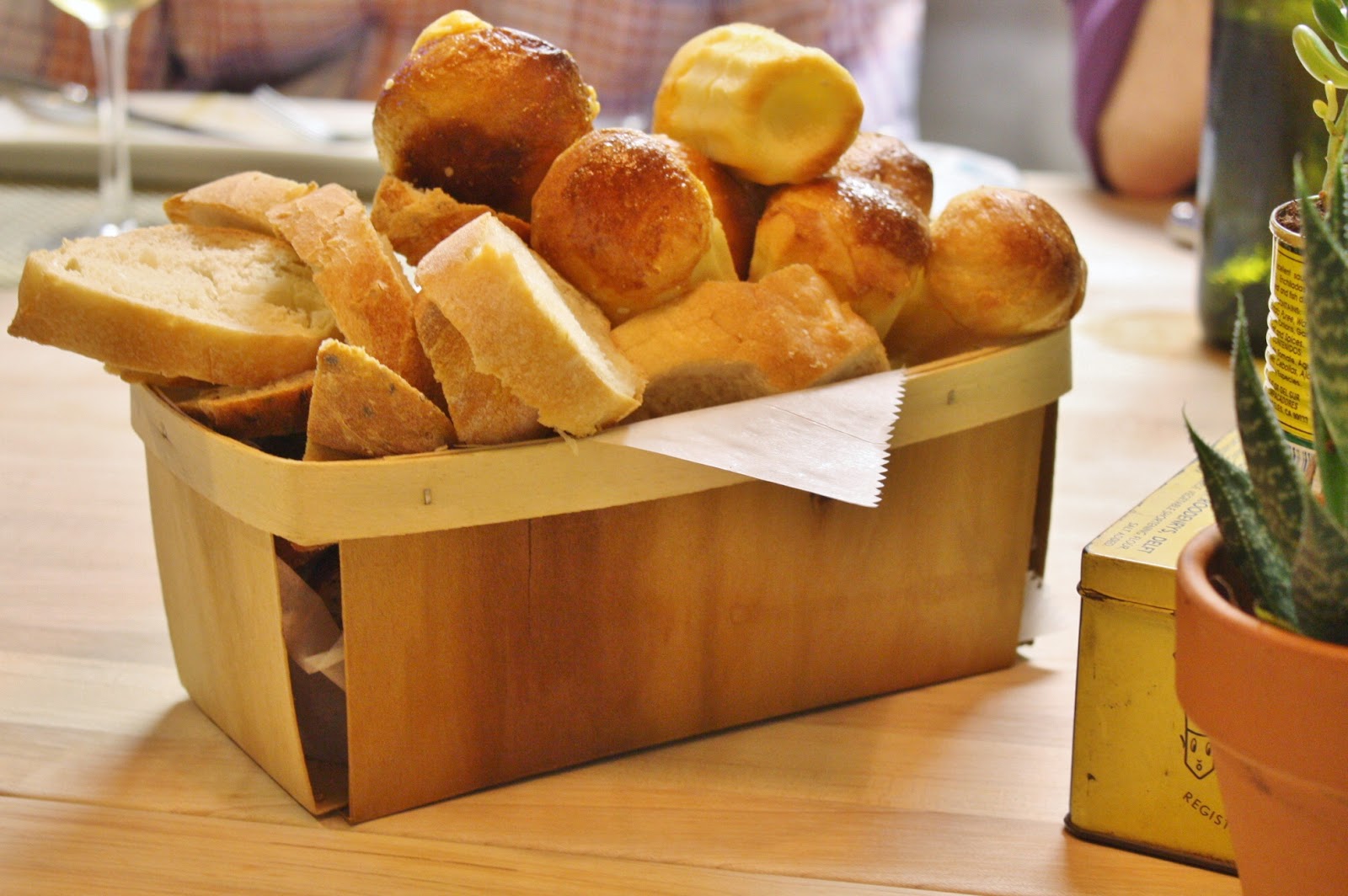 Next up was the "pasta" course- a lone raviolo (singular version of ravioli) stuffed with ricotta and spring pea puree and perched on a thick slice of Berkshire pork belly.  The dish was finished with more pea greens, a few shaves of Parmesan and a bit of frothy... something. The thick, doughy pasta and the super-fatty pork belly made this a pretty heavy course, but with incredible layers of flavors- the result of top quality ingredients and a very skilled chef. 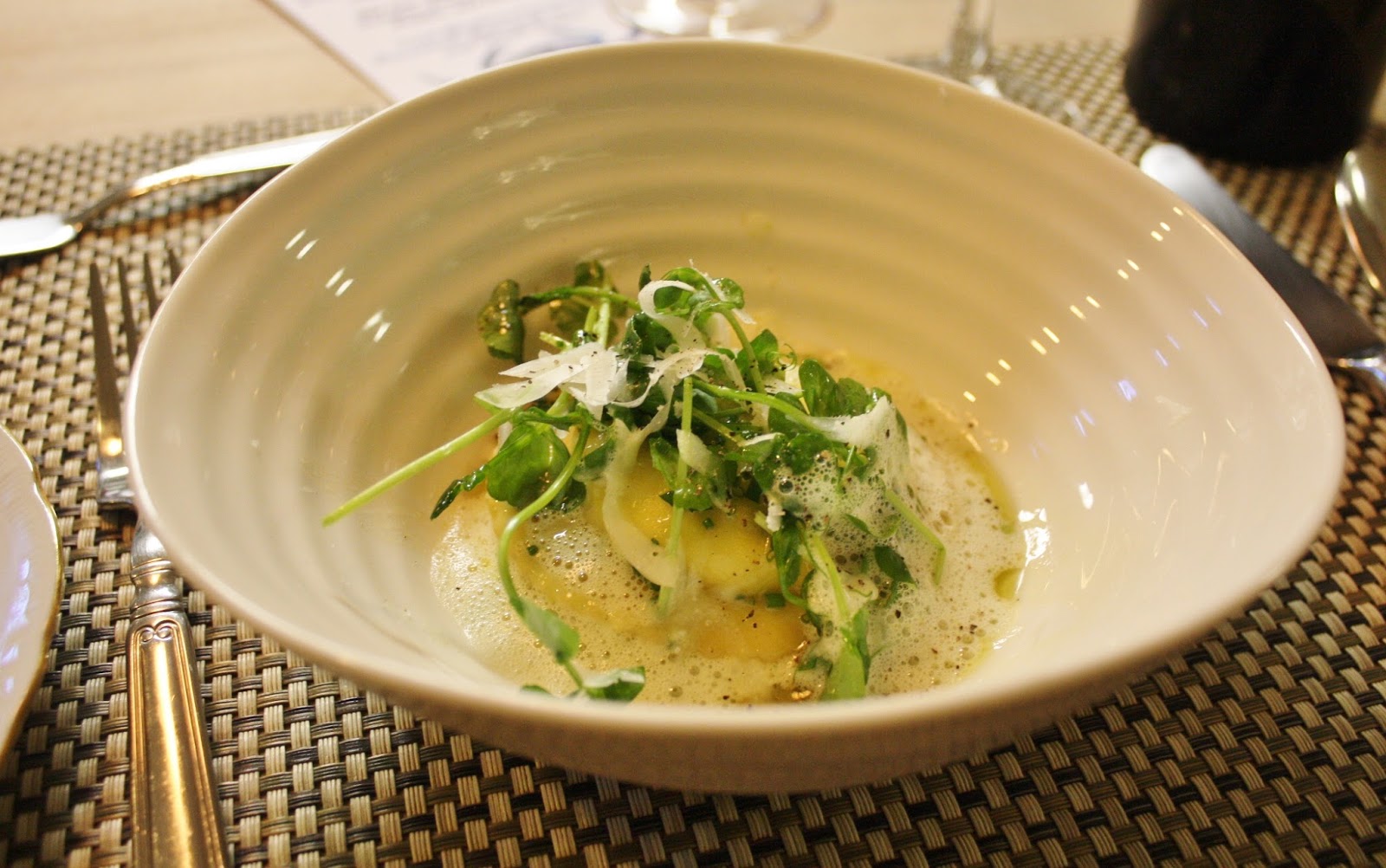 Following the pasta was the fish- another rendition of oily blue fish served atop an impossibly light custard flavored with roasted garlic.  Al dente fava beans, a fennel salad, and an herb-infused oil provided lots of green to the color palette and helped balance the heavier fish.  The custard was definitely the star of the show here. 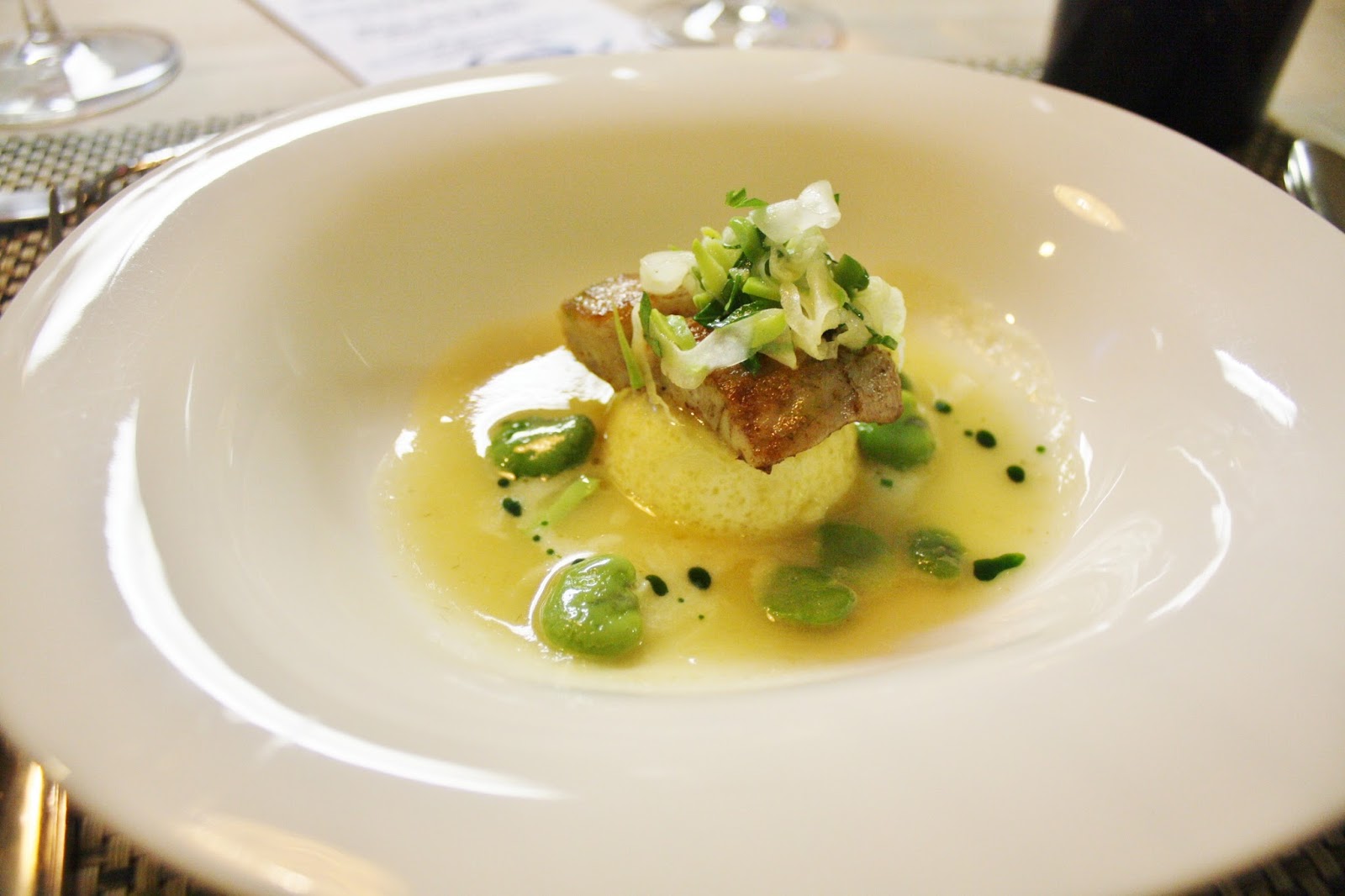 The poultry course was my least favorite- the cold smoked and butter poached chicken was plenty flavorful, but the curry roasted carrots and dill yogurt were very confusing and entirely dissonant.  My dislike of strong curry didn't help a bit- others at our table seemed to enjoy the dish. 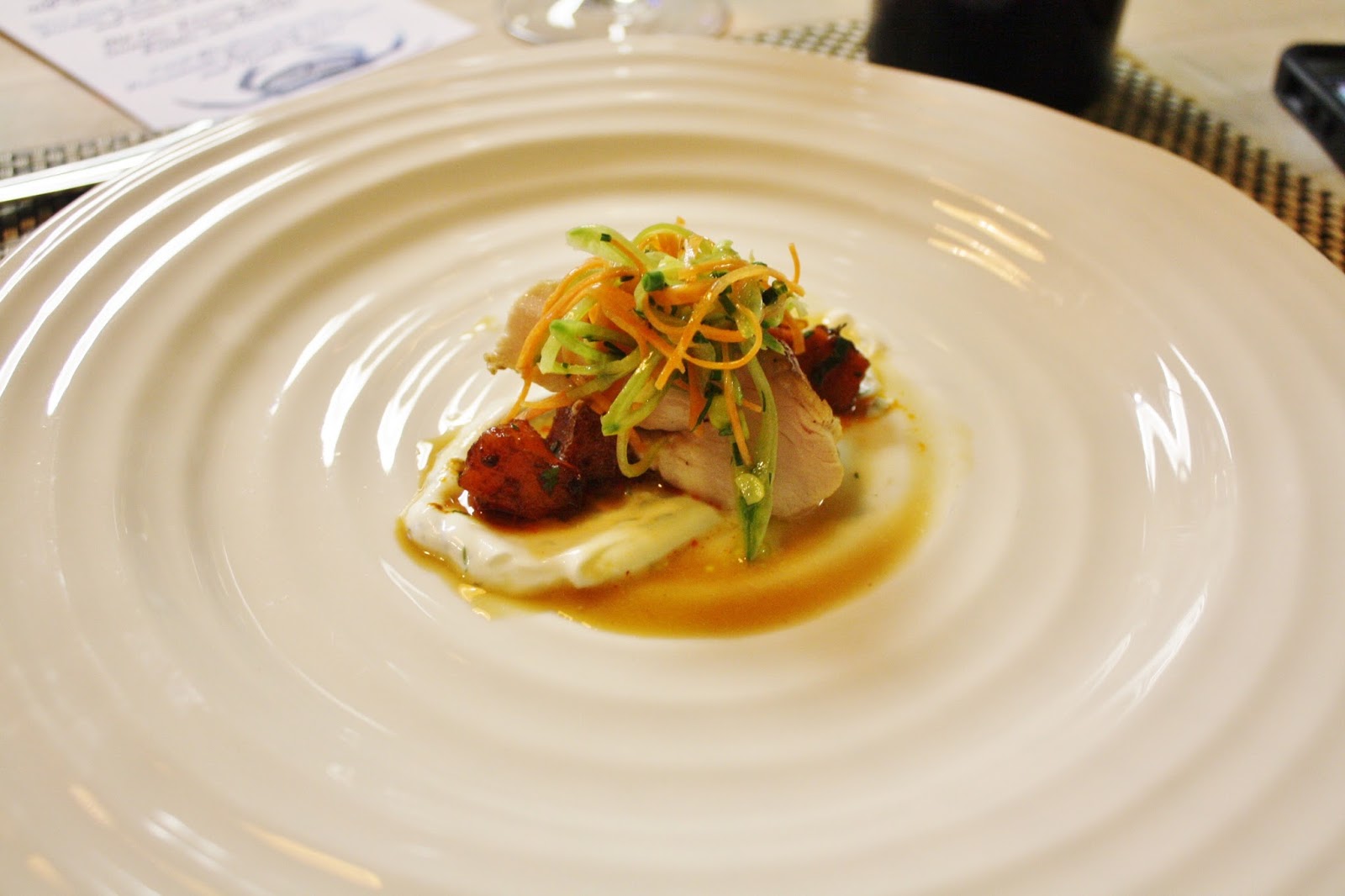 At this point I was getting understandably stuffed, but there was one final meat course to be eaten- the red meat.  We were served red meat two ways- sliced skirt steak as well as a cylinder of braised short rib seared together.  The paired vegetable was also served two ways- with melt-in-your-mouth fried squash blossoms and roasted zucchini enhanced by accompanying poblanos.  The heartier veggie and a low level of spice was an excellent addition to the perfectly cooked beef. 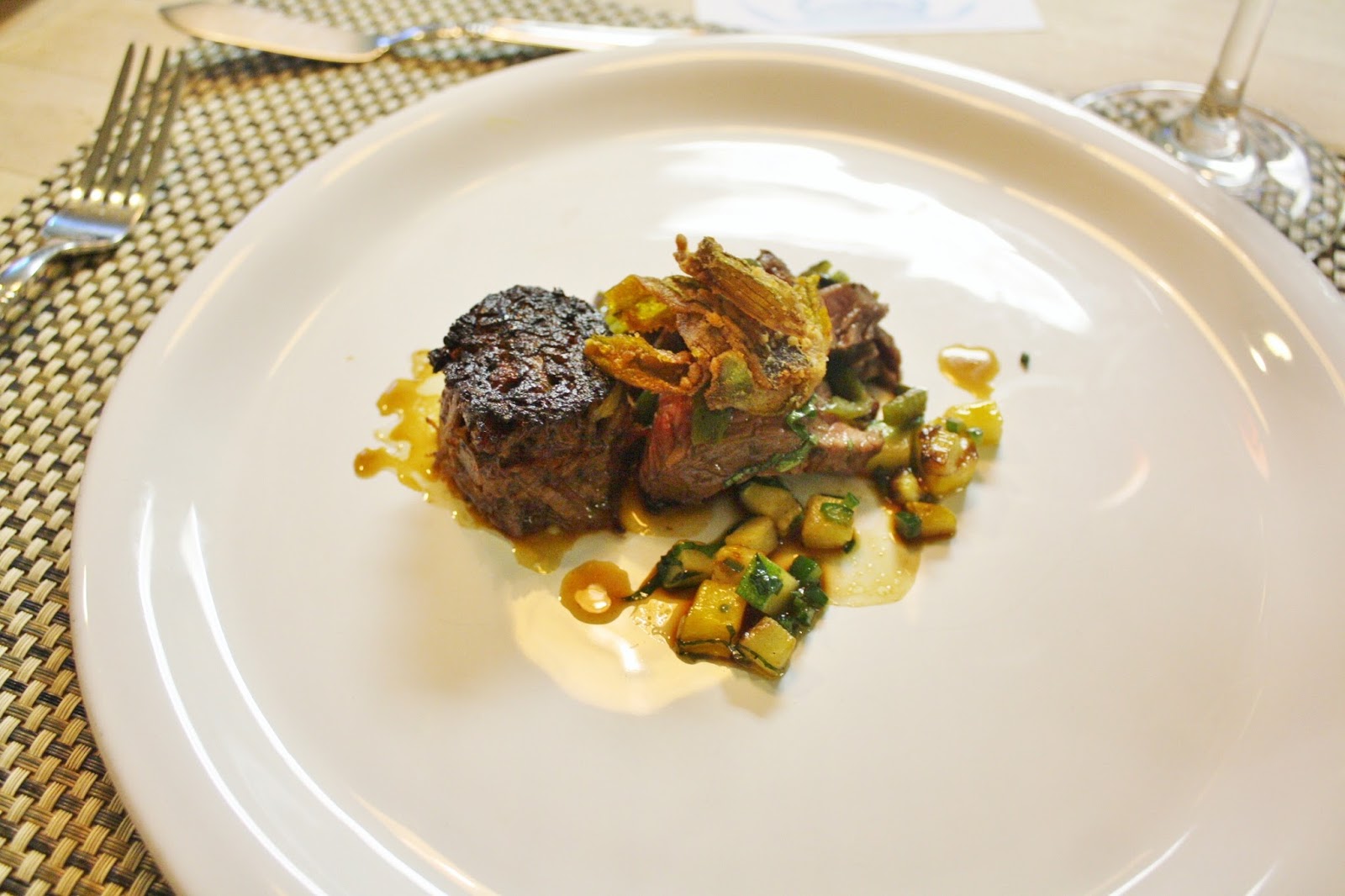 We also had a traditional cheese course, but again, Talula's takes an incredibly unique approach to this, serving five of their favorite cheeses with a number of infinitely interesting "condiments."  The cheeses ran the gamut from an aged, crystallized gouda paired with raspberry mustard, to a deeply veined blue paired with pickled asparagus and a sprinkle of multi-grain crisp. 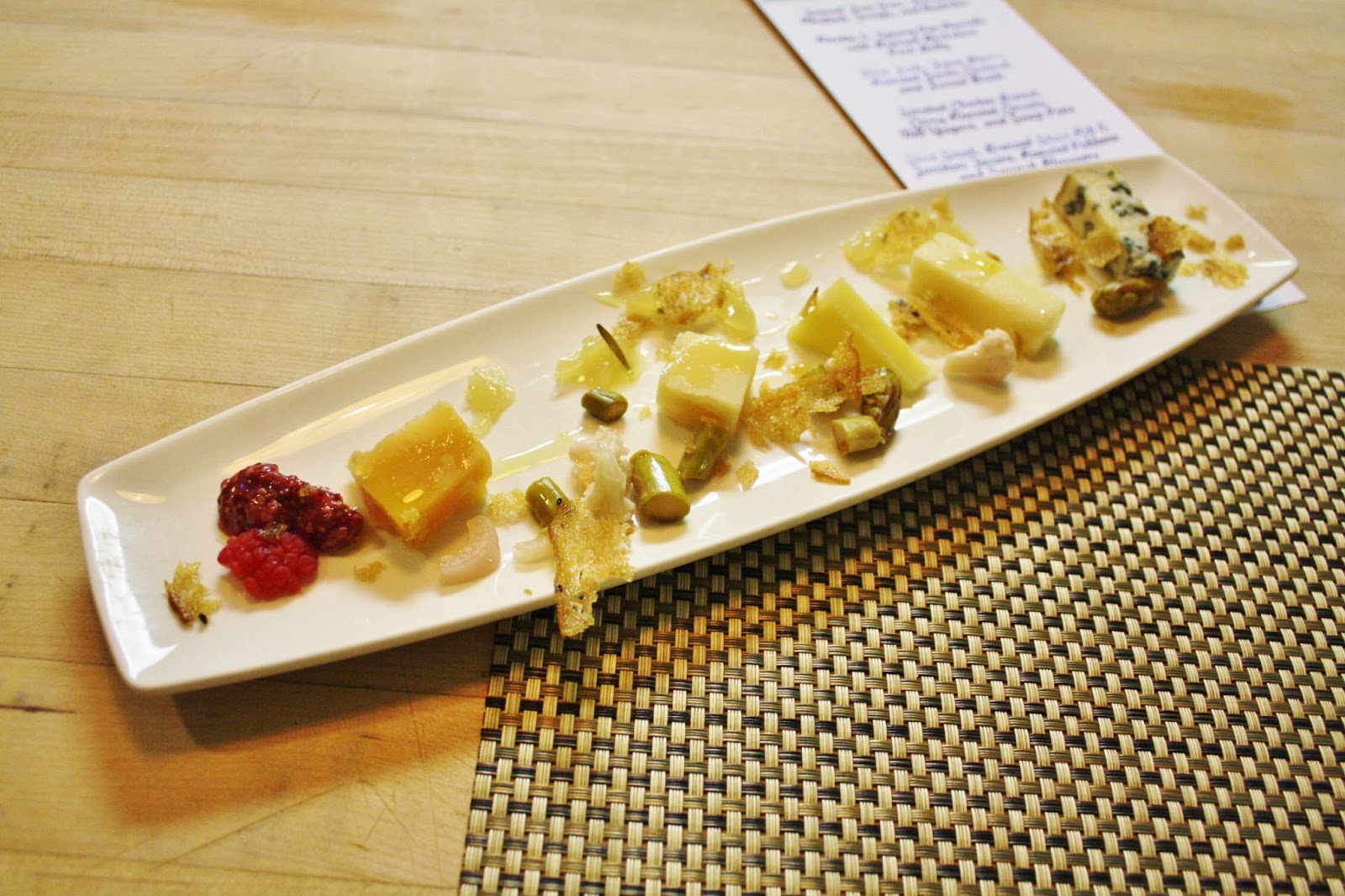 Coffee was served with the anticipation of dessert- A & I shared a cup of decaf spiked with a splash of heavy cream and a small chunk of brown sugar.  Coffee doesn't always appeal to us after a large meal, but this hit the spot. 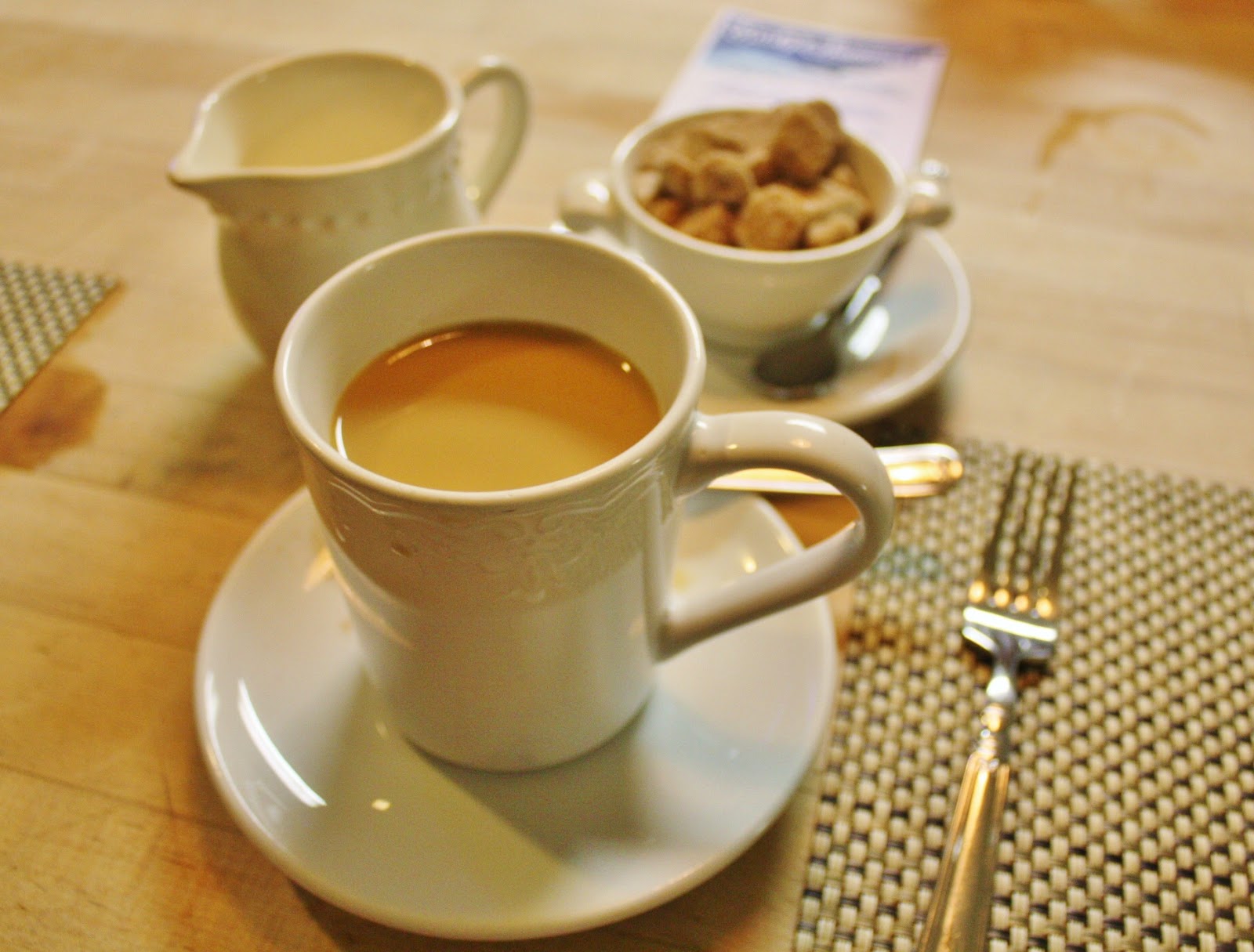 Thankfully after all this savory food, the transition to a sweeter final dessert course was relatively painless. Mini blueberry pancakes and a small scoop of tart buttermilk ice cream relied heavily on the sweetness of the blueberries instead of a heavy hand of sugar.  We were extra impressed with the pancake-making technique- the chef actually used a baking sheet over the burners instead of a griddle. Each pancake had exactly enough room to expand without touching its neighbors, which required some extra skilled flipping action.  Regardless, coffee and pancakes really ended the meal on a high note. 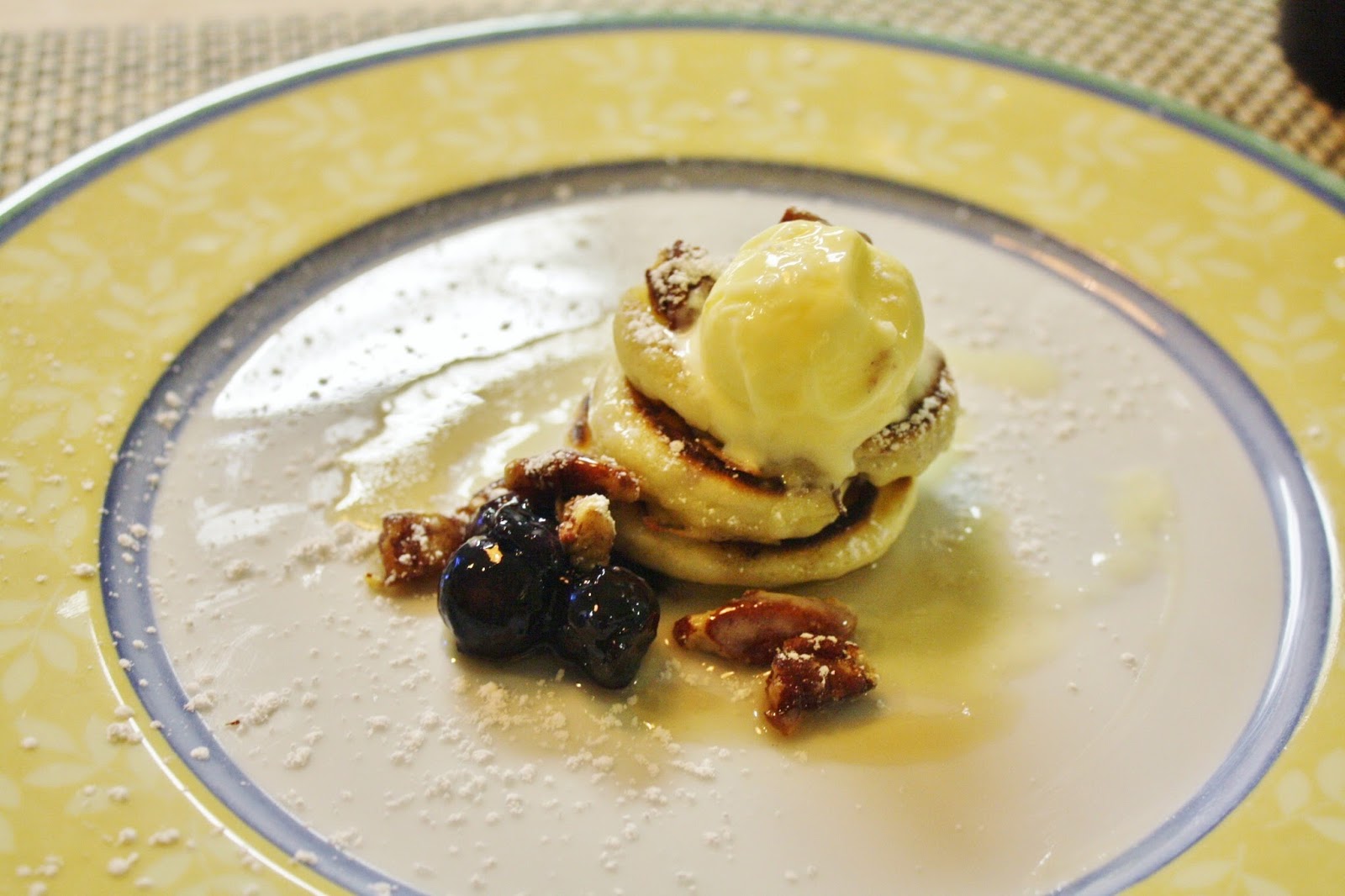 We're incredibly glad to have had the opportunity to try Talula's Table.  Apparently it is one of the hardest reservations to get in the entire country, and the food tells a seasonal story that makes it worth the wait.  However, coming in at $139 (includes tax and tip), it's not a cheap meal and best for that extra special occasion (like a 30th birthday!).

For those of you who came here to read about Luke's Lobster, feel free to skip down to the pictures.  For those of you who have some interest in our lives and blogging habits, we have some news for you. We've recently discussed closing the blog- it seems that in the past several months, blogging has become not only more difficult, but also less enjoyable.  As we no longer live together, we don't eat together as often, and taking photos and making notes during meals spent with friends, family, and significant others takes something away from those experiences.  Since we get nothing out of this other than the simple joy of eating and sharing our thoughts, it seems silly to continue to do something we aren't loving.  However, we've decided not to shut Two Eat Philly down, but instead start on a new path- a path of much fewer posts, and likely far less words, and (hopefully) more pictures.  Topics may vary a bit, but of course will always be food related.  We're maintaining a forum to share our thoughts and adventures, but perhaps to a smaller audience- and that's just fine with us.  We hope you continue to follow along, but if not, thanks for stopping by for the past three years!

And now-- onto the food!  Luke's just opened a couple of weeks ago, but a single picture of their lobster roll had me checking my calendar for our first chance to check it out.  My husband and I are in the home stretch before our closing date (sold our place!), and so began the terrible packing process this weekend.  A break for lunch offered a perfect chance to treat ourselves to Luke's to help offset packing grumpiness. 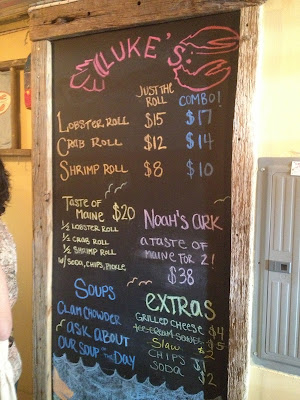 Located in the old Bonte space on 17th and Sansom-ish, right next to another favorite, Underdogs, the space has been reconstructed to look very nautical.  It's cute.  The menu is short and simple, mostly seafood rolls but a soup of the day, a simple grilled cheese, and a couple sides are also available.  I chose the "Taste of Maine" to get a sample of all three seafoods offered-- shrimp, crab, and lobster ($20).


Each type of seafood is prepared very simply- served cold (not even room temp), with just a hint of mayo and/or butter.  The "rolls" are actually top-split mini loafs of what I can only describe as Texas Toast- you know, that soft, fluffy, buttery, pure white bread.  Lightly toasted, I can't think of a better carrier for fine seafood.  All three meats (?) were just as you'd expect- super fresh- with lobster being the clear winner. 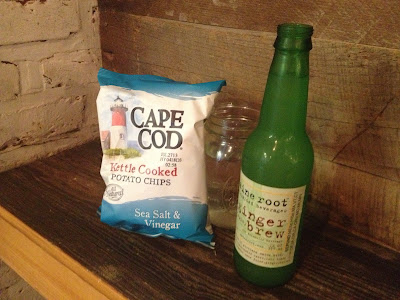 The Taste of Maine also comes with a side of chips and a soda- self-serve from large baskets and a refrigerator respectively.  Both remain loyal to the New England theme- Cape Cod kettle cooked chips, and Maine Root sodas.  Obviously I've had Cape Cod chips a million times, but Maine Root is new to me.  I'm not a soda drinker, but MAN.  The spicy ginger brew is particularly amazing, and I'm sure the blueberry soda, sarsaparilla, and root beers are equally as unique and tasty.  I would seriously consider stopping in just for one of these drinks, especially on a hot and sweaty day. Self-serve water is also available, and Luke's goes the extra step, providing mason jars from which to drink it. 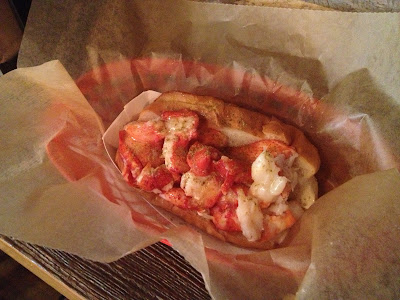 My husband got the lobster roll alone, and this is the route I'll take in the future (well, plus the soda!).  For $15, yes it's a pricy "fast food" lunch, but it's 100% worth it.  Where else can you get that quantity of fresh lobster for that price?  Not anywhere around here, that's for sure.  Centrally located, super quick (we waited 5 minutes) and with plenty of space to sit and eat... I can't think of anything to criticize.  Welcome, Luke's!