To follow up on our commentary on current Top Chef contestant Nick Elmi's Laurel, I'll recap our recent meal at Top Chef winner Kevin Sbraga's new restaurant, The Fat Ham.  The space is small and cozy, and we got lucky with a quieter Saturday night (our parents ate here separately on a Friday and complained about lots of noise). Compared with his more formal Sbraga, the menu is more loosely defined (and less expensive!), so as a group of four we got to taste lots of dishes.  The concept is much more casual as well, focused on Southern comfort food without any fancy twists.

The fried green tomatoes are a Southern staple, so they were a must ($6).  Two large discs of firm, unripe tomato were nicely battered and fried to a crisp- plenty of crunch here to offset all the tomato juice. Horseradish-tinted sour cream makes for a potent version of an aioli.  My only complaint is that there were only two pieces.. we needed another order. 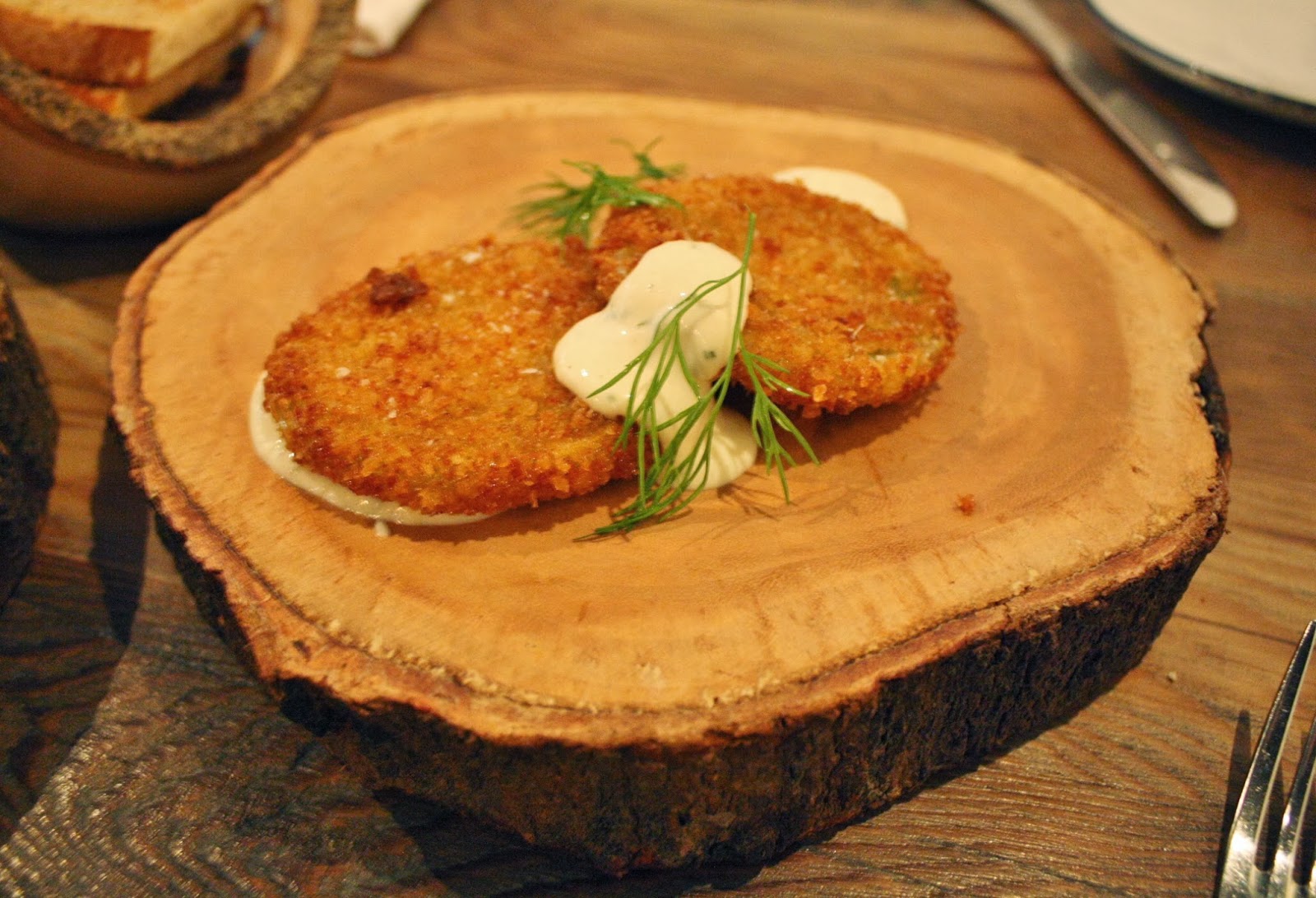 We also split the Fat Ham charcuterie plate ($14).. and by plate I mean slice of tree trunk.  Instead of serving plates, almost all of the dishes were served on carved wood, which we were told are stuck in the dishwasher along with everything else.  Kinda cool but kinda weird.  Highlights of the charcuterie included a chicken liver mousse and silky soft bacon- so unlike the usual crispy stuff we're used to.  This was a great plate to split between four people, and well worth the price. 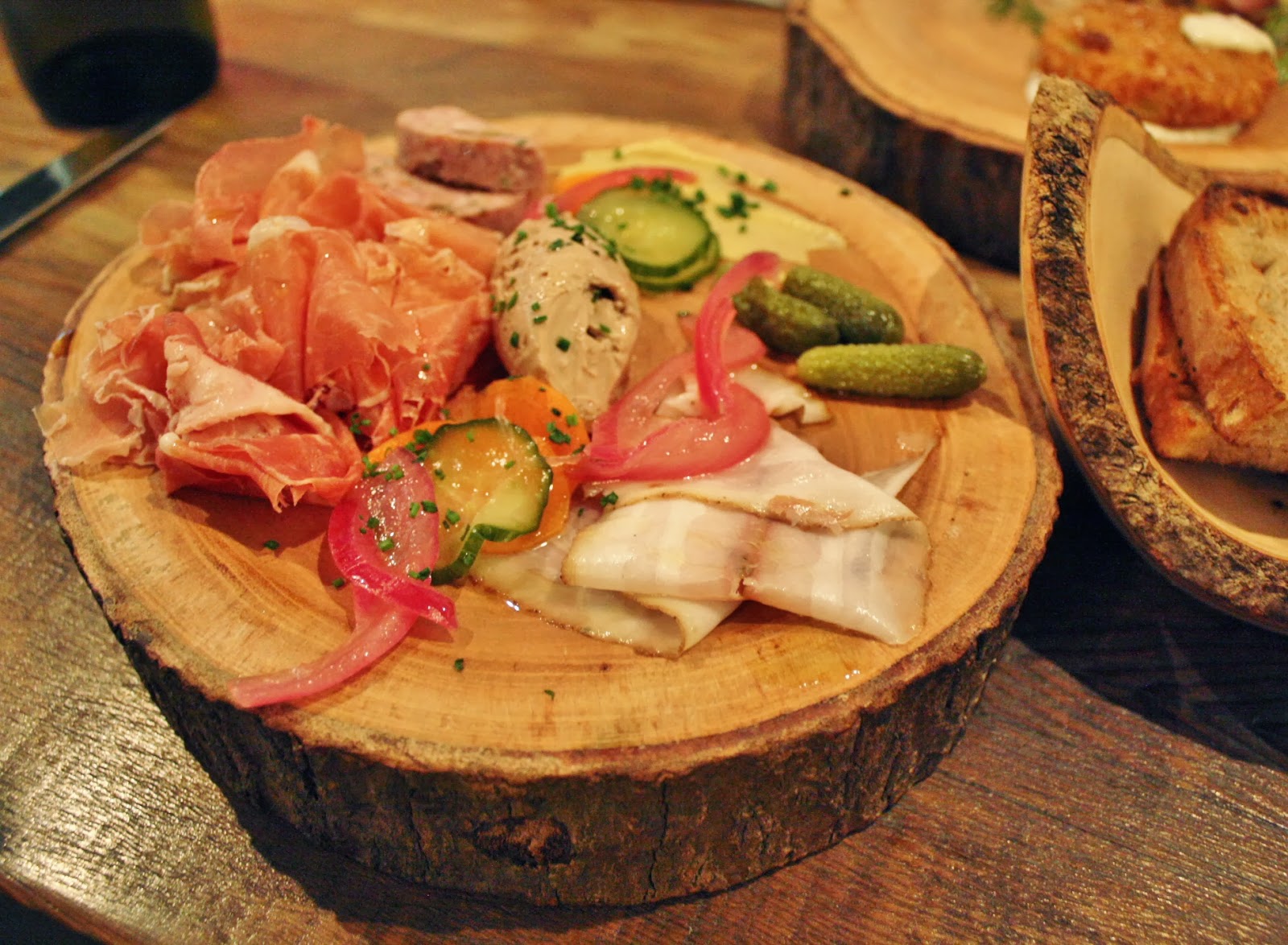 There aren't a lot of larger plates to choose from, so I went with the ham & eggs ($10) as a sort of main dish.  A thick piece of ham sourced from Virginia is seared and topped with a thin red eye gravy (involves coffee!) and a perfect over-easy egg.  Spicy green tomato relish gives the whole thing a good kick, with toasted pieces of bread to sop up the inevitable juice.  Our waitress heard us dissecting the dish (just for a good food discussion) and was convinced we hated it. Regardless of the fact that I cleaned my plate and repeatedly told her that I enjoyed it, she removed it from our bill.  Ham and eggs is hard to take to the next level, but with the thoughtful addition of sauces and careful execution, Sbraga did a great job here. 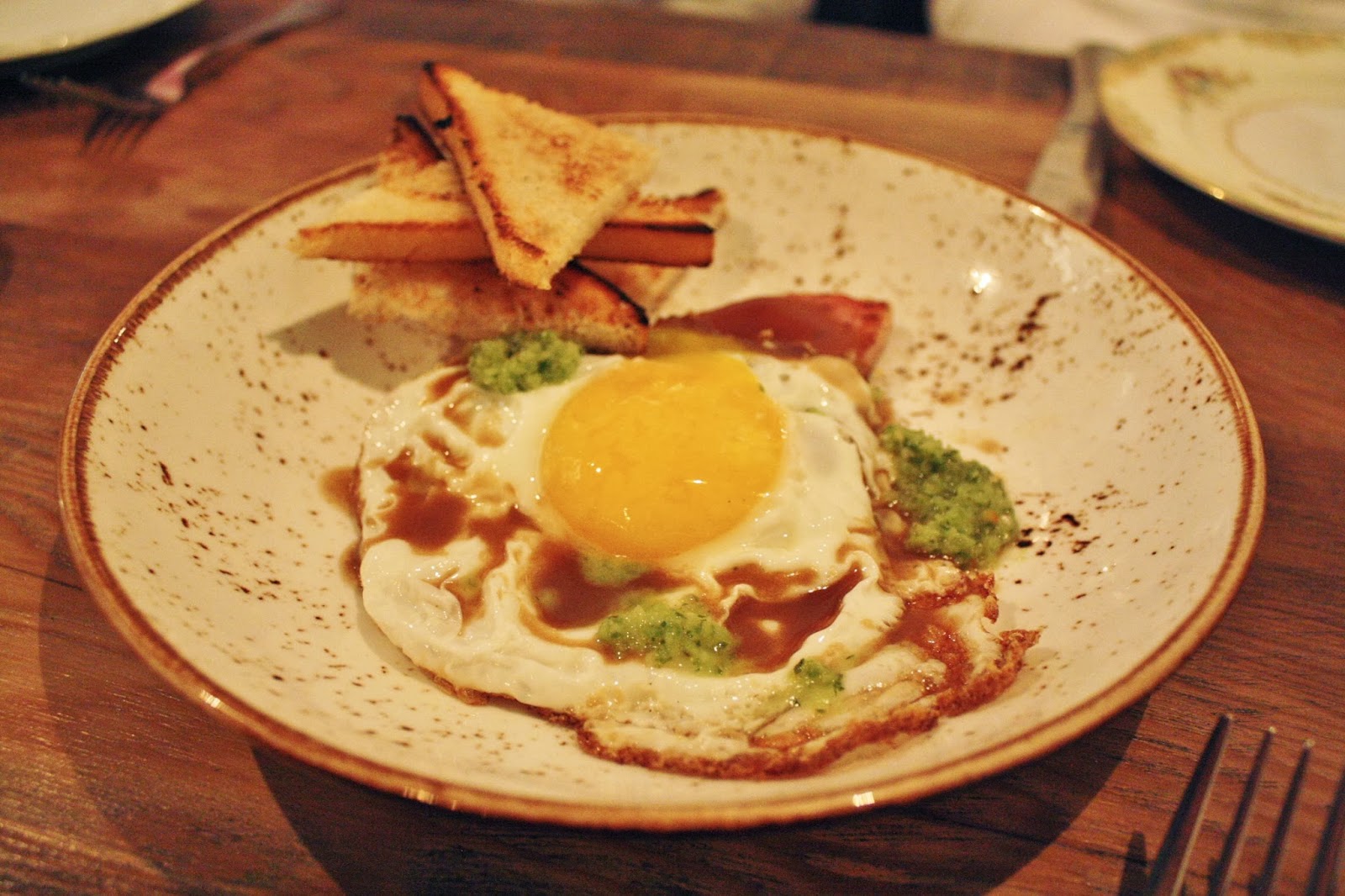 The oyster sliders ($5/each). Oh man, I don't even know if I can do these babies justice. A fat oyster perfectly fried (maybe twice? that breading is CRISP) atop a super fluffy yeasty housemade mini-bun (complete with shiny egg washed top and crunchy seeds), finely shredded and slightly sweet coleslaw, and a runny gribiche... pure food genius.  It was that perfect combination of flavor and texture profiles. 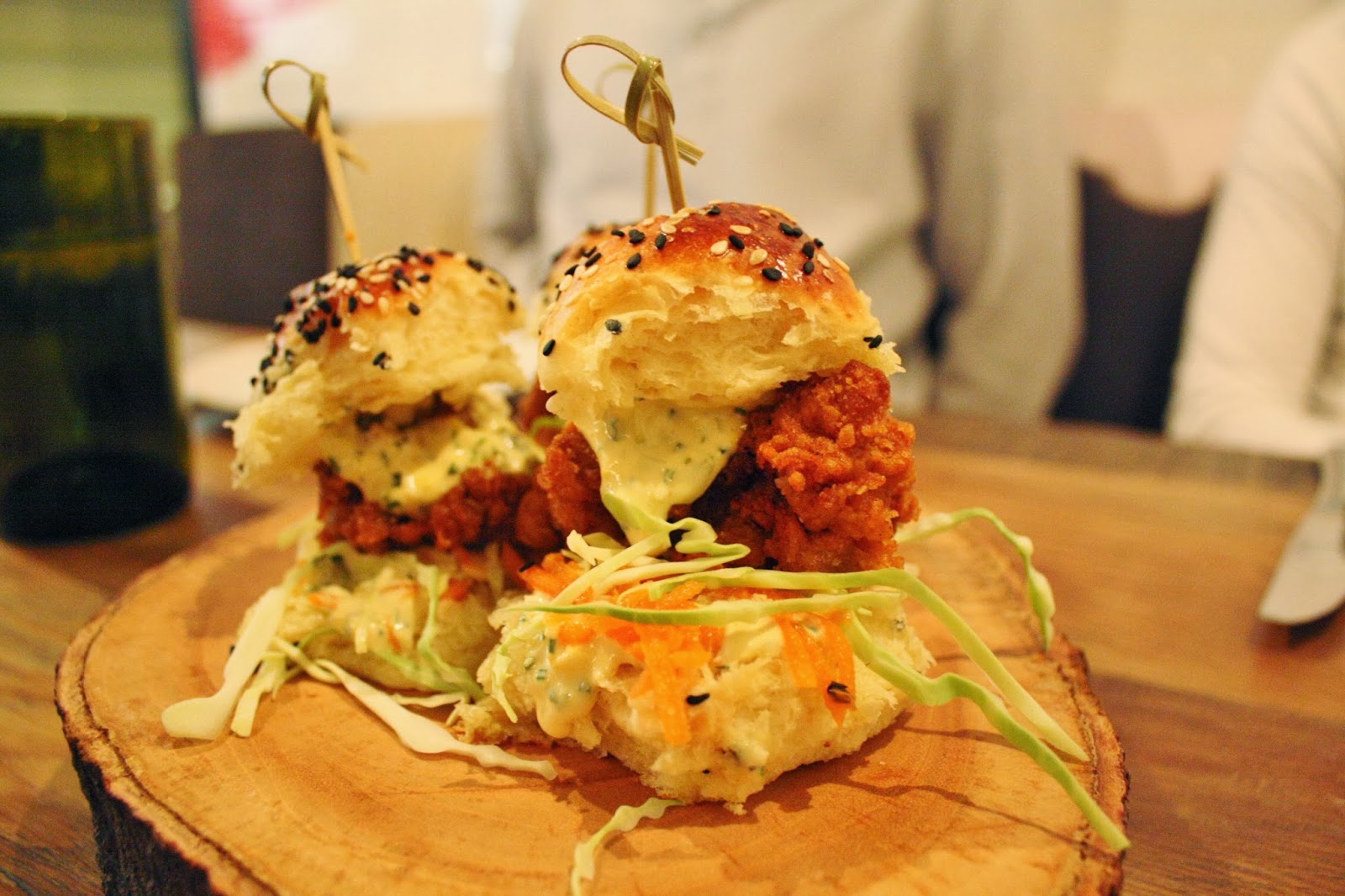 A bowl of Carolina Gold rice ($7) was another highlight.  The dish is completed with slow cooked oxtail and it defines the word savory.  A dab of housemade hot sauce brought this over the top, and Sbraga does it again with that textural combination of al dente rice and falling-apart-in-your-mouth meat.  So simple and yet so delicious. 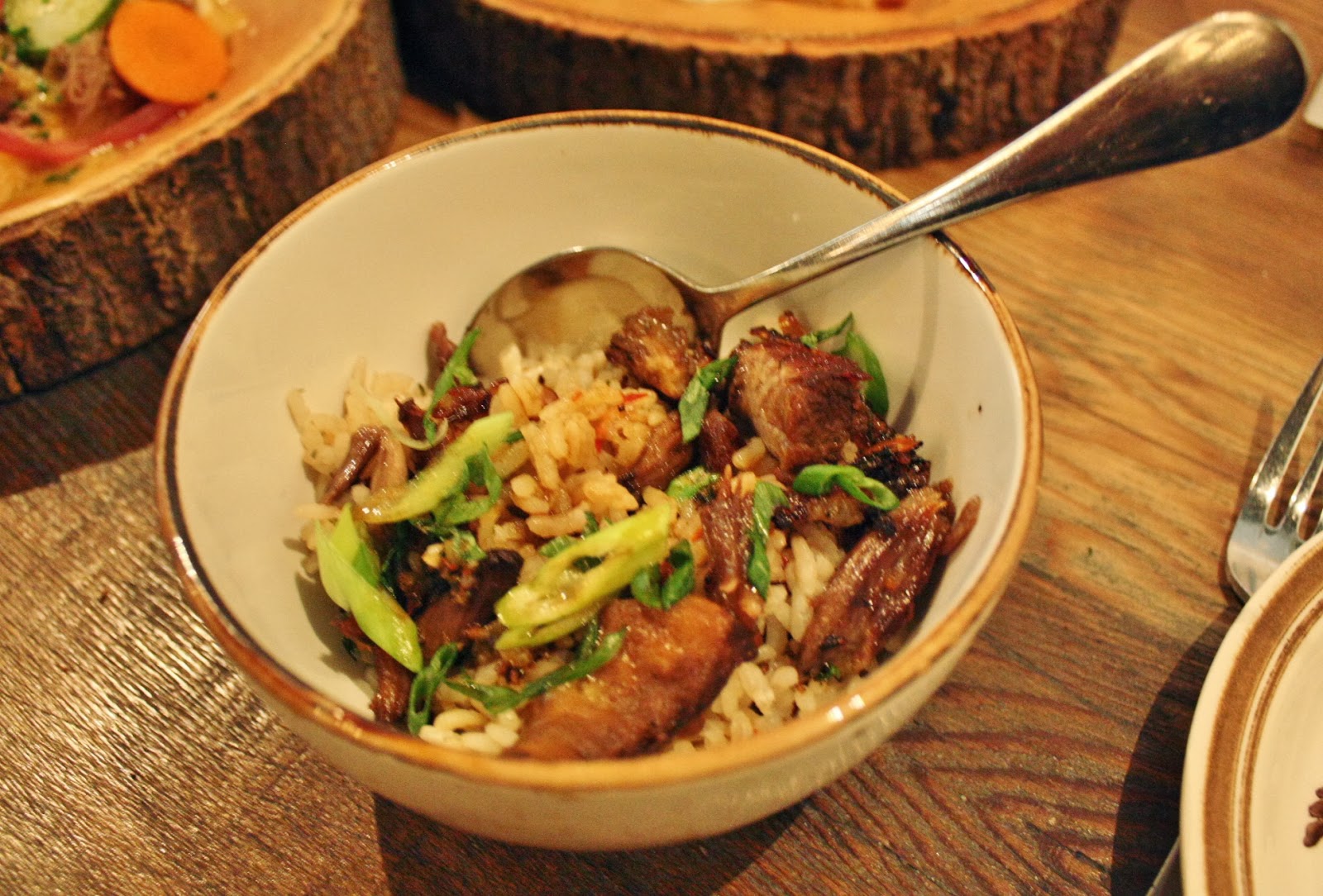 The pulled pork ($11) was less exciting, served atop a piece of white bread that acted as a sponge, becoming soggy and lost- I'd prefer bread on the side to make a fresher sandwich. Pickled cukes, carrots, and purple onions adds crunch and color, but the pulled pork itself isn't anything mind-blowing. 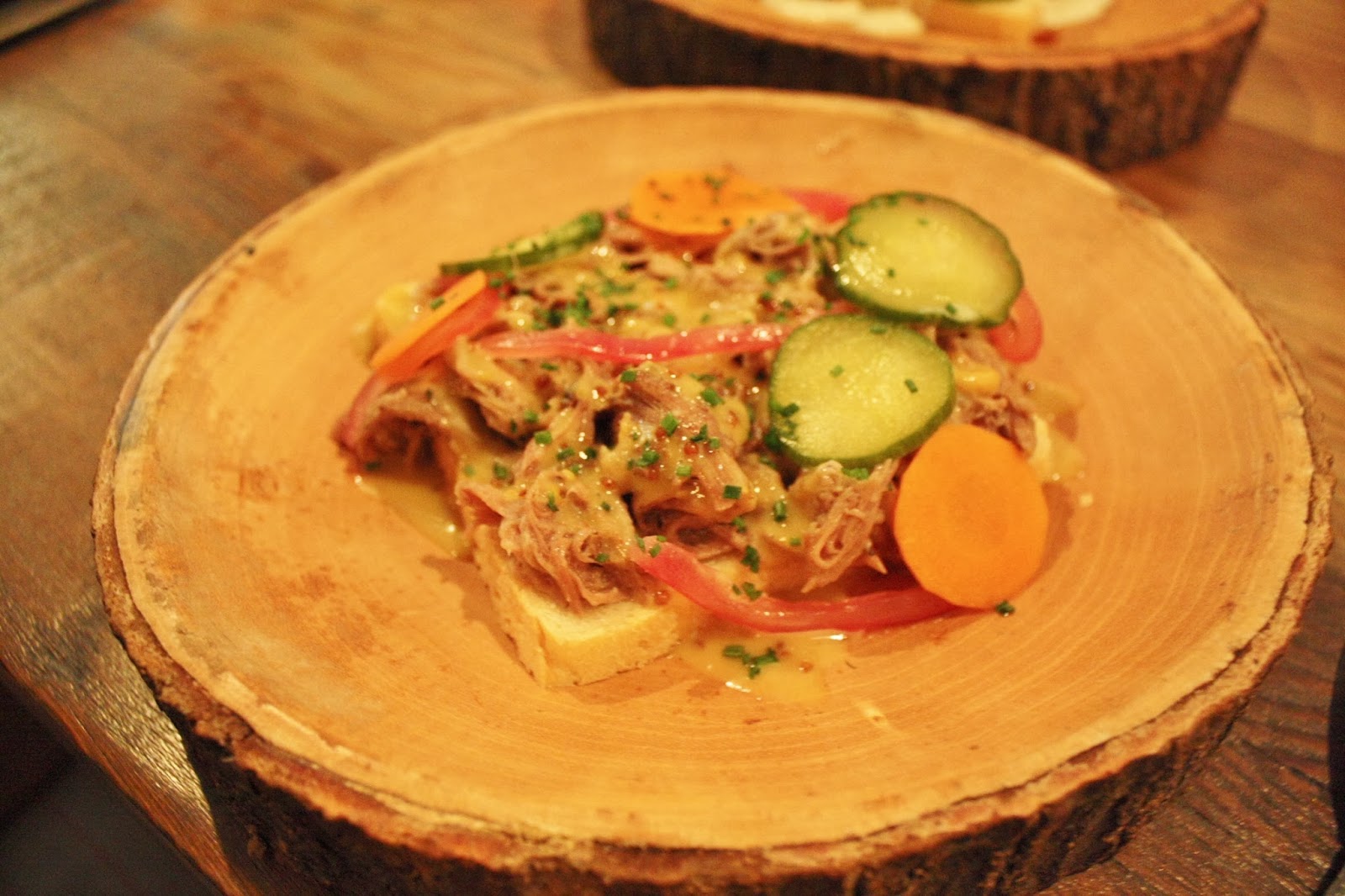 Instead of the pulled pork, go for the hot chicken ($13).  The bread, pickles, and a thin ranch dressing here are quiet afterthoughts to the super crunchy, steamy meat that is eye-openingly spicy.  It's so hot in both contexts of the word that just hovering your face over the chicken as it arrives gives you a good sinus clearing.  Recent conversation about this being the "best fried chicken" in Philly has some serious truth. 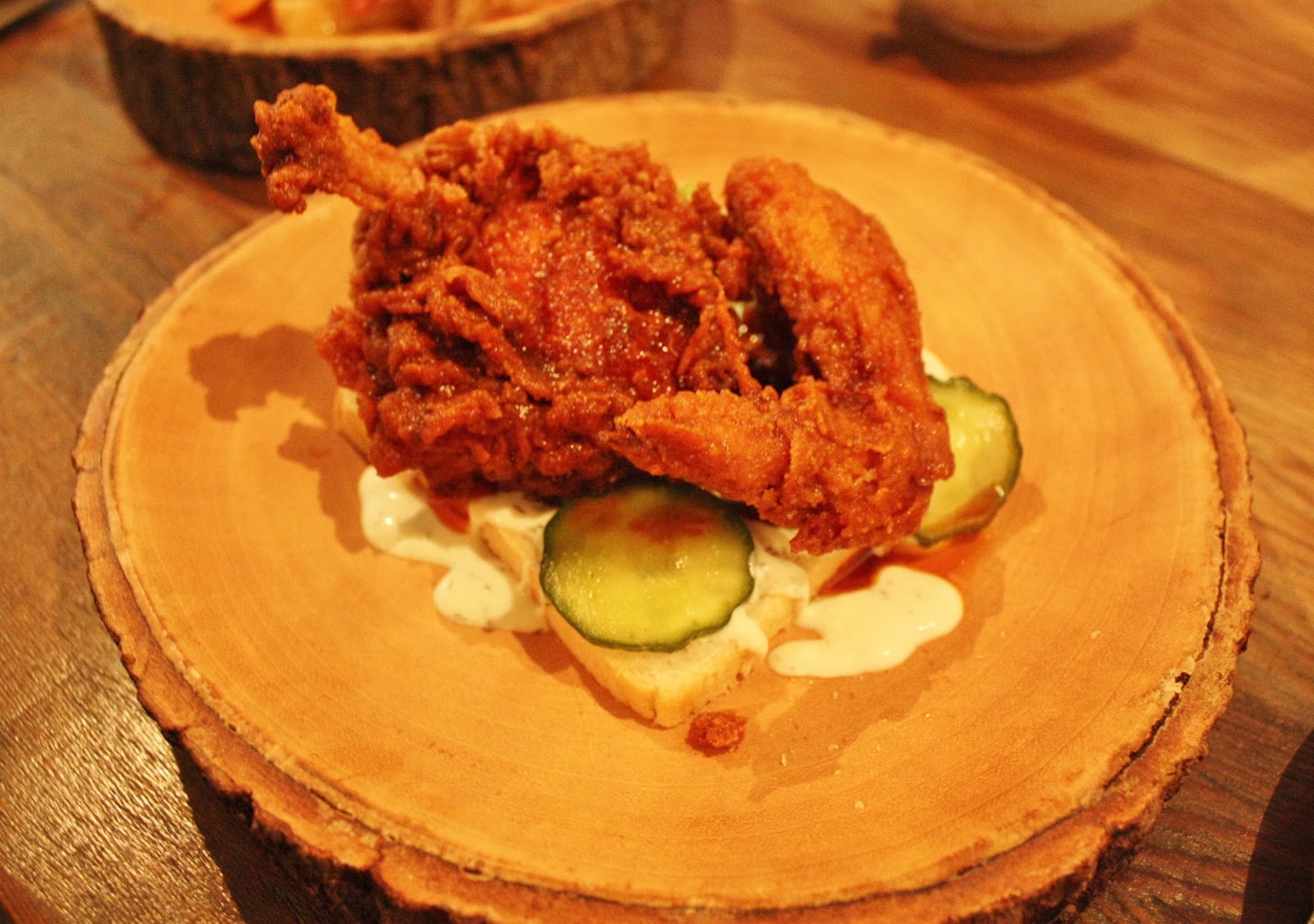 Our last savory dish was the mac n' cheese ($8), made with pasta shells and a (meager) BBQ chip topping. My dad recently introduced me to the best mac n' cheese recipe EVER, but this was a decent rendition.  If you like soupier mac, this one's for you.  If you make a good one at home, stick with something else (like another oyster slider). 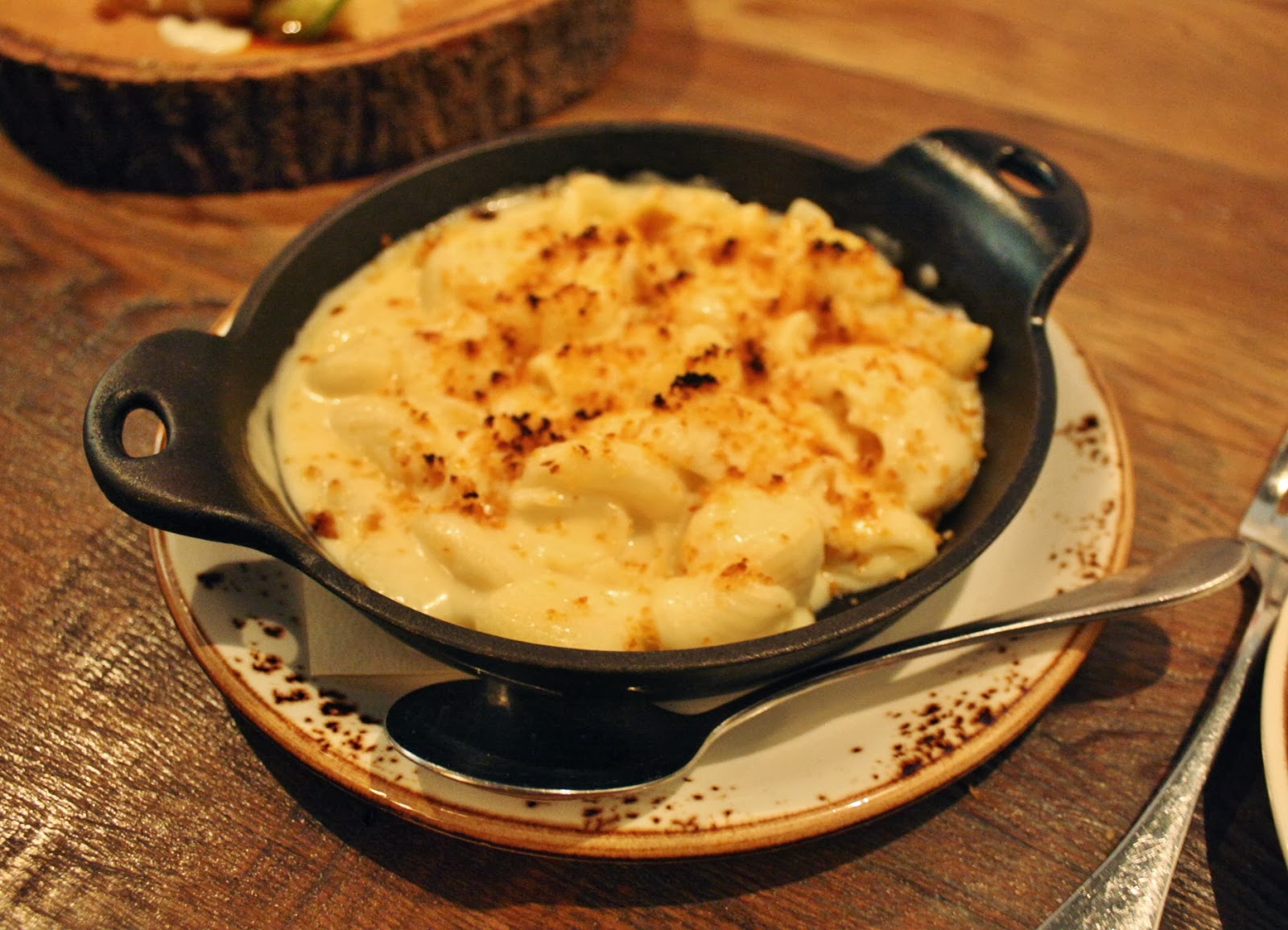 The meal was pretty speedy (especially with K. Sbrags himself expediting at the counter right next to our table), so we decided to finish out the meal with a chocolate chip cookie skillet hot out of the oven ($6).  A scoop of vanilla ice cream countered the high temps and made for a super classic, if not particularly exciting, end to the evening. 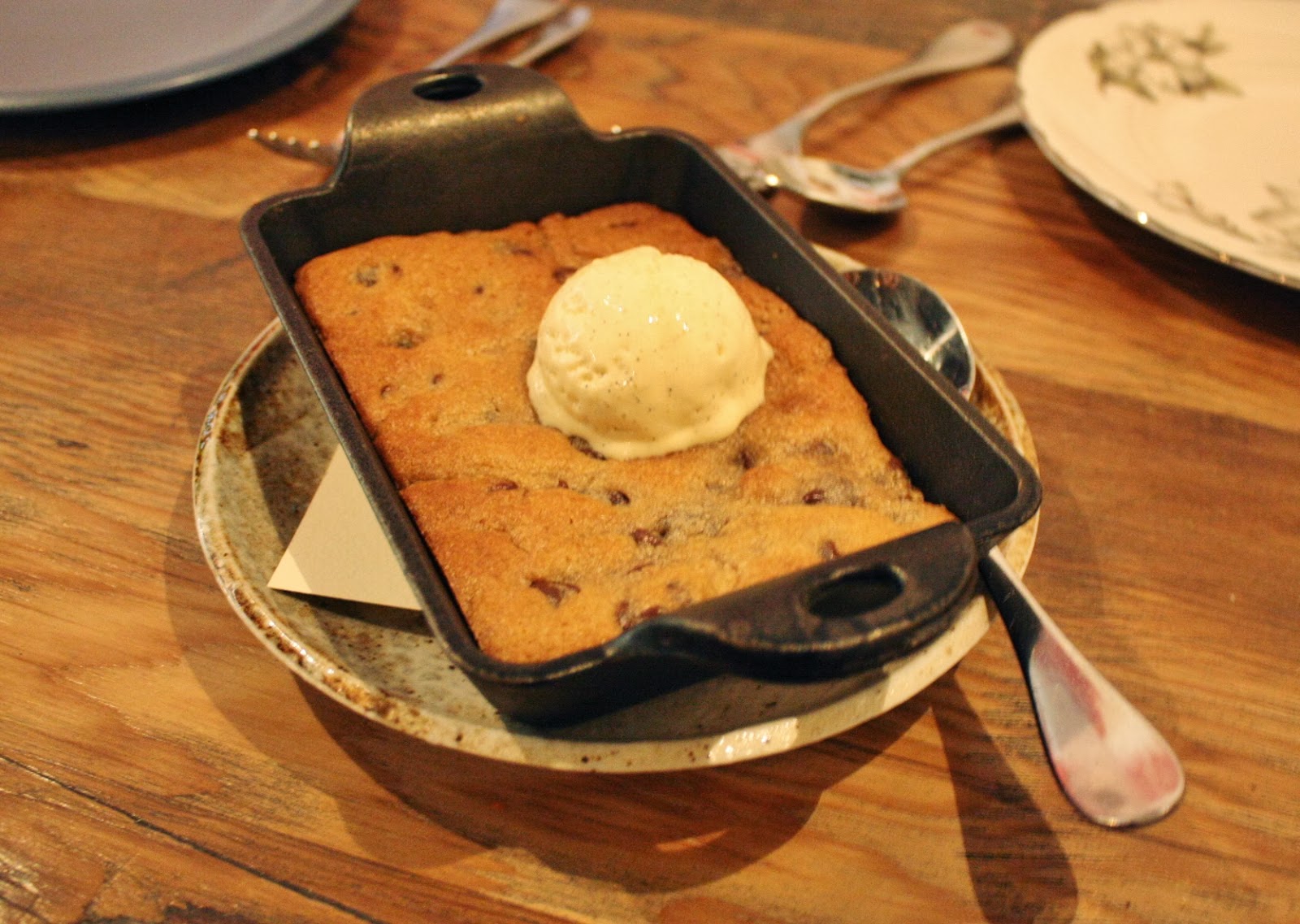 Overall, the price was right, we loved the service and the atmosphere, and almost all of the dishes were worth ordering again.  Highlights were definitely the rice, the oyster sliders, and the hot chicken. It's a striking contrast to Sbraga, so don't go expecting something similar. Go with an empty stomach and the need for some good down-home Southern classics (with a bit of Sbraga influence).

We've been following Top Chef this season- not only is it fun to see snippets of New Orleans, but two Philadelphia chefs were competing for the title.  Unfortunately, Jason Cichonski of Ela was eliminated after a few challenges, but Nick Elmi (former Executive Chef of Rittenhouse Tavern) is holding on strong-- and is now one of the top 5 final contestants!  The longer a contestant stays on, the more you learn about his/her cooking styles, and it was easy to see from the beginning that Chef Elmi is a competent competitor (his boyish good looks and loyalty to his family also make him mega-adorable).

Of course, seeing his dishes each weeks has me salivating (for more than one reason) so I talked a friend into checking out his new Passyunk restaurant, Laurel.  Even though he has become a moderate Philly food celebrity, it's still easy to get a reservation, even though his tiny space holds only 24 seats.  When you walk in, you kind of feel right at home, at least if you're familiar with the Philly intimate BYO scene.  The small space is upscale, not too cramped, and the small groups remained relatively quiet throughout the evening (sometimes a worry at a larger BYO).

The team describes it as French/American, though I'd say it tends to lean towards the "New American" genre, combining familiar foods and cooking styles with the not-as-common ingredients and skills to elevate each dish to a higher level.  The menu is split into four sections, and the staff recommended an item from each.  I'll break it to you now- this won't be your cheap date option.  My meal (three courses, no dessert, no extra drinks, including tax/tip) was $75.  I have a hard time justifying spending so much on food, but I keep doing it, so I guess it is worth it in some unnameable way.

(I stupidly forgot my camera, so hold tight for some grainy iPhone pictures!)

If I've learned anything from Nick's time on Top Chef it is that he is a seafood master.  So I was all about the fish options, of which there are many.  First course: albacore tuna, horseradish, shallow, asian pear, and yogurt ($12).  These menu descriptions can be misleading-- little information about the preparation of the dish, and while so many ingredients are listed, many are also left out. 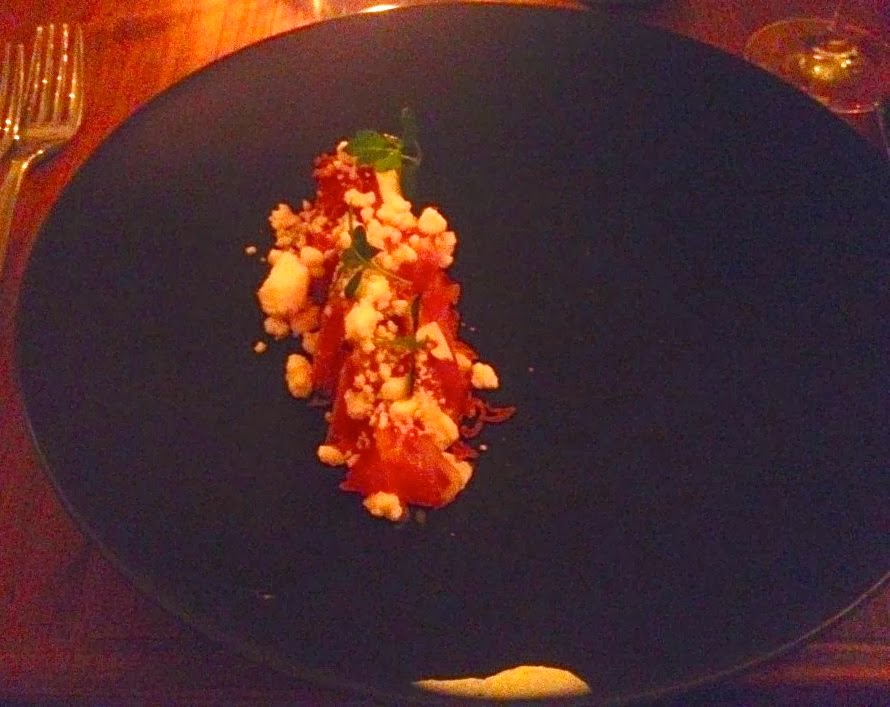 This tuna dish was the highlight of my meal though, served raw and expertly sliced under a shower of frozen horseradish cream.  Somehow the extreme cold of the horseradish helped mellow its spice, and not overwhelm the perfect (and generous portion of) tuna.

I also had a taste of my friend's scallop dish, "Torn New Jersey scallop, mutsu apple, sea lettuce, celery", for $13.  Raw scallop has a fairly fishy taste, which I was unaware of- not as appetizing as the smooth, savory tuna.  Also, still no idea what a mutsu apple is.  The celery was quite distinct, particularly in the broth under the scallop. Our meal was well paced, with time between courses for plenty of conversation and people watching.  It was obvious many of the other restaurant patrons were Top Chef fangirls (and boys), asking to meet Chef Elmi and praising his success so far.  Our second course provided fewer options (three versus four for the other savory courses)- of note, the small menu leaves little room for vegetarians.  I chose the fresh ricotta gnocchi, since Chef Elmi actually won a very competitive Top Chef challenge with his handmade gnocchi.  And now I can see why-- a rich tomato based sauce, plenty of pancetta and garlic, and all of that pillowy cheese (coated in more cheese).. it was near impossible to finish even this small bowl ($13). 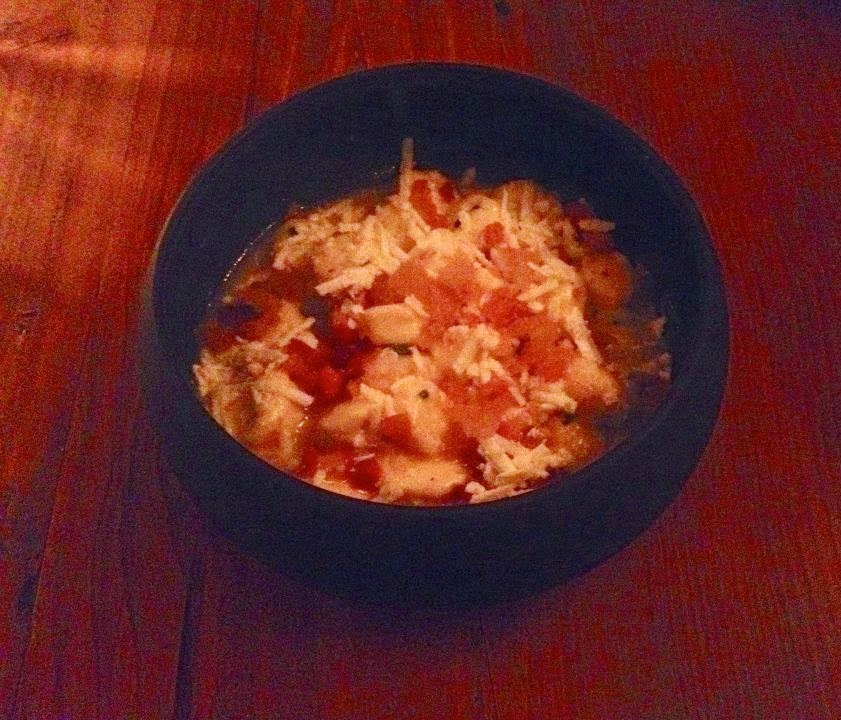 The "Grilled Maitake, Roasted Hazelnut, Preserved Lemon, Lemongrass Chicken Broth" is essentially a very brothy mushroom soup.  With all those contrasting flavors, I thought for sure this would be hard to love, but Nick has a way with knowing exactly what ingredients he can mix and match.  The one thing we didn't like was that the soup was served lukewarm.  On a cold evening, a hot soup would have been so comforting. 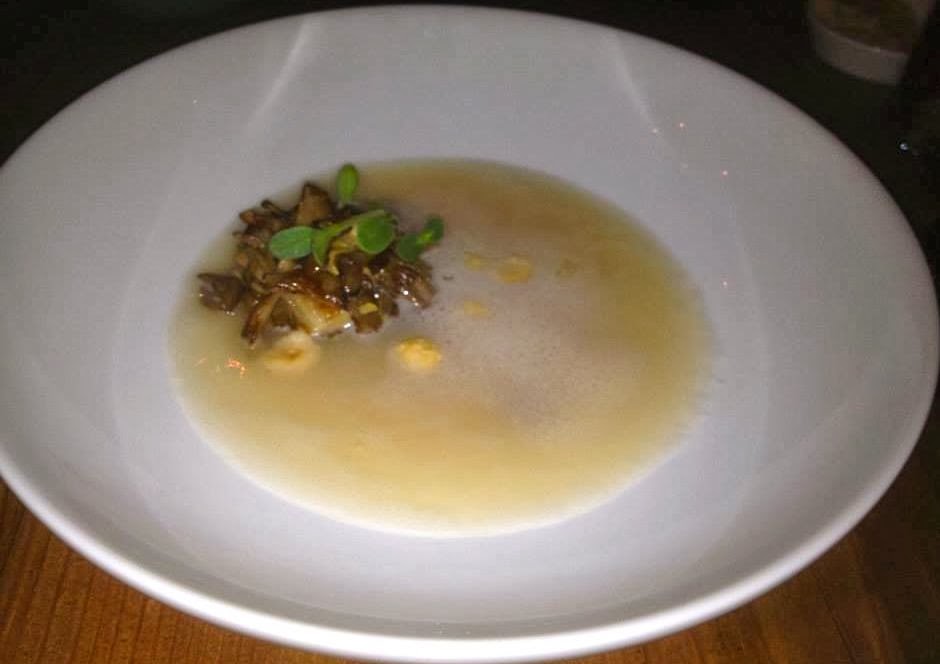 And that brings us to the third course, which is meatier and technically serves as the entree.  Once again (seriously, I swear this is some sort of worldwide restaurant downfall), the entrees were less cohesive and delicious than the first two courses.  It's almost as if the focus on the main protein causes chefs to under think the sauce/side/preparation.  My seared ocean trout with turnip, burgundy snail and black quinoa was solid, but I would have rather had another plate of the first course tuna ($27).

The other entree on the table offered me a taste of something completely new.  Berkshire pork was perfectly cooked, with a crisp exterior but with plenty of pink  inside.  I absolutely loved it, but my friend commented that it tasted like/appeared to be pork belly, which isn't his personal favorite.  Of course, the staff is available to answer these types of questions, but more information on the menu would help us make our our own best decisions. 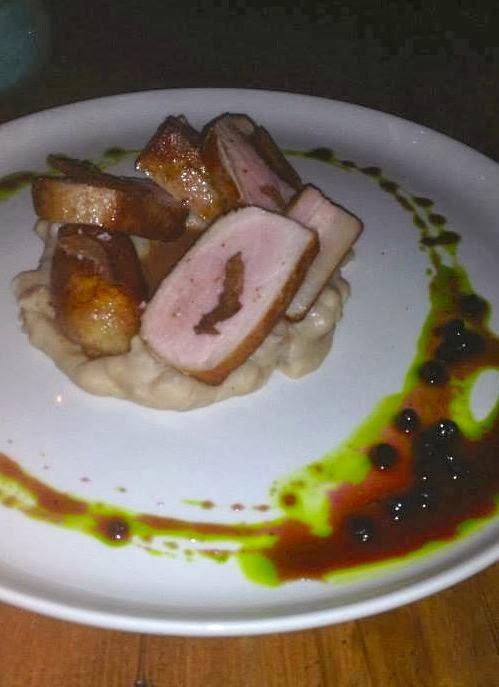 That bed of mashed potatoes?  Nope... crushed chestnuts.  I ate a bite and I think my face scared the waitress, who came to explain this part of the dish.  Incredibly starchy, the mashed chestnuts kind of coated your mouth, and the flavor wasn't one I wanted to keep reliving.  The kale-huckleberry sauce was beautiful, but I can't comment on its flavor.  This dish definitely highlights Chef Elmi's very creative touch (which I think was also exhibited well at Rittenhouse Tavern, from photos and reviews we saw), and perhaps our palates aren't QUITE advanced enough for all of his creations.

A small handful of desserts are also available, but I felt I had eaten (and spent) plenty.  There was no pressure to vacate our seats, and I declined to bother Nick with another fangirl request (this may have been because I was a little nervous to meet him!).  Laurel seems to be keeping a low profile on the buzz scale, but I can see with a few tweaks, it could become a top Philly spot, particularly for special occasions.  Hoping to see Chef Elmi bring home another Top Chef title to our city!