One of the problems with keeping up to date with restaurant news and activities is the constant barrage of delicious looking (or sounding) foods that we read about daily. We have our ongoing "list" of restaurants we need to try, and a somewhat shorter list of recipes we'd like to make. On graduate student budgets, we definitely use the majority of our spending money for food- either groceries or meals out. We try to save by making our own meals throughout the week, which allows a splurge or two on the weekends. However, special menus and good deals at many restaurants happen on weekdays, so we very often miss out on them. Thanks to the Philadelphia court system, I acquired a little extra money in exchange for spending 6 days as a juror (did you know for the first three days of your service, they give you a whopping $9/day?). I knew I wanted to spend it on a special meal, and before long, one came along.

Supper is one of my favorite restaurants in the city- a beautiful space, delicious foods, light portions, and a great staff. I wrote about their brunch previously, but every meal I have had there has been top notch. One of my Philly food dreams is to eat at one of their Sunday Suppers, a themed meal that occurs just once per month-- and always looks beyond delicious. I had my eye on this month's Sunday Supper, but the restaurant added an additional special menu that J and I agreed would be even better. For this one-time-only-meal, Supper was teaming up with a chef from Kentucky, Edward Lee of 610 Magnolia to provide a fixed price dinner ($38/person). Granted, I've never heard of him or his restaurant, but knowing the high standards of Supper, and the theme of "Southern Hospitality," I knew it would be good.

The meal happened on a Tuesday, providing a special treat mid-week. Supper's Twitter feed warned us of a busy restaurant- a totally sold out meal. However, when we arrived at 7, the time the dinner was listed to begin, it was fairly quiet-- apparently reservations were available for any time that evening. The meal began with bread service and a glass of lemonade. I'm not sure whether the bread was part of the Southern theme (walnut raisin?) but the lemonade brought us straight back to Southern country fairs. Served in a Mason jar, it was cold and sour- way more lemon than sugar, which allows for a much more refreshing drink. 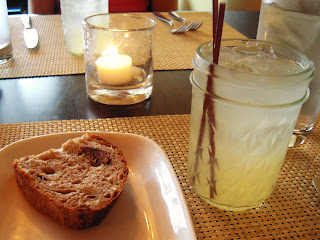 The first course was listed as "Pig's Feet and Wasabi Griddle Cakes," which sounds quite bizarre but was actually a bit plain. Two small cornmeal based pancakes, with a bit of a smoky, spicy flavor, were topped with an herb salad and a drizzle of lemon-chili sauce. The cakes had no sign of meat-- we've had pig trotters before, and loved them, so I was a little disappointed that the soft flavorful meat wasn't more apparent. The herb salad consisted of leaves of basil, mint, and perhaps a few other herbs, and was just "so-so." I personally don't like the overwhelming flavor of straight, fresh herbs. 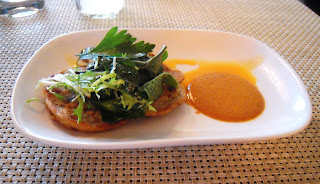 There were two options for the entree, so naturally we each selected one of them and then tried both. I started with the Maple Brined Pork, which was NOT what was originally advertised online. Perhaps this irks me more than it should, but I would have preferred the "Crispy Pork Shoulder" that was promised me. The meat was extremely soft and moist, both indications of a long brining process. It had a slight sweet flavor from the maple syrup, which was well complemented by the whole grain mustard sauce served alongside it. It was a fairly small piece of meat, but enough to share and still be satisfied, particularly as a part of a multi-course meal. 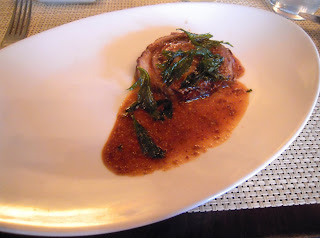 The second entree sounded amazing. Kentucky Fried Skate Wing, or "KFSW" for short (doesn't quite have the KFC ring to it). J began with this entree, and was struggling a bit to tackle it. Typically, skate wing is served off the bone, as a thin layer of meat. In this case, the skate wing was whole- basically two filets of skate on either side of a rack of bones. Thankfully the bones are large enough to not cause your classic case of accidental fish bone choking, and easy to pull out of the meat. It was also very easy to simply scrape the meat off of the rack of bones. Unfortunately, skate is a very moist meat, and it didn't take particularly well to the frying process. The outer shell of fried batter was thin and rather unflavorful, adding little to the mild skate. It was served with sweet pickles and some crispy fried sage- both delicious but meager, and the promise of hot sauce fell a bit flat. This dish was completely original, and props to Supper and their guest chef for attempting it, but definitely could have used a bit of tweaking. 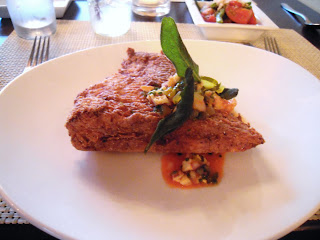 The entree was accompanied by three sides, served family style for us to share. All were riffs on classic Southern dishes- grits, collards, and tomato-bean salad. The grits were the absolute best grits I've ever had- they tasted like sweet cornbread. They were topped with fresh purple corn, which provided a wonderful texture contrast to the creamy grits, and a few crumbles of smoky bacon. Southern perfection. The collards were braised to the point of buttery softness, but were on the sweet side. We prefer our collards "savory," but these were still good. They were mixed with spicy, crunchy pecans and a few slices of soft peach- did these go through the braising process too? They seemed a bit off. The tomato and pole bean salad was the freshest of the three sides, a simple salad of sliced heirloom tomatoes and a relative of the green bean tossed with a basil vinaigrette, much like a thin version of pesto. Eating out of the family style dish was a little bit awkward, but we made it work. 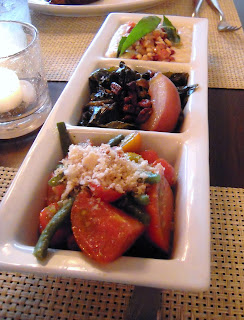 We were expecting a chilled cantaloupe soup for dessert, but another menu change had us intrigued. We did receive a take on this soup as a sort of "intermezzo" between our entree and dessert, a tiny cup of thin cantaloupe syrup surrounding fresh raspberries and mint leaves. It was good, and of course I always appreciate a little "extra," but I'm glad that the real dessert option consisted of something even better. 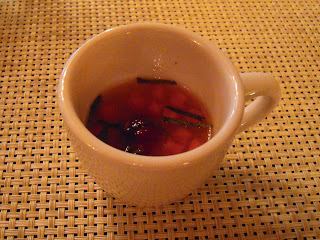 Waffles may not seem like a classic dessert, but in the South, you can eat waffles for pretty much any meal (waffles and fried chicken, anyone?). A soft, sweet Belgian-style waffle was studded with pecans, drizzled with a sorghum syrup, and topped with a scoop of buttermilk ice cream. This style of syrup is also very Southern- not as sweet as maple syrup, with a strong flavor of molasses. It was the perfect accompaniment, pure food genius in my opinion. This dessert only got better when we tasted the ice cream- it basically tasted like cold, sweet butter. There was none of the sourness often associated with buttermilk, and melted into the waffle, it was a little bit of heaven. 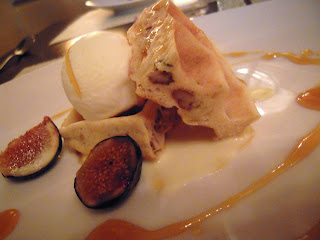 As we waited for our check, we noticed another table being served a little something extra-- we weren't totally sure what it was, but I was sad that we hadn't received one! (Note: you might wonder how I even desired another bite of food after all of this. The lovely thing about Supper is the perfectly portioned dishes- plenty for you to get a good taste of each component, but not nearly enough to make you unbutton your pants. We left feeling satisfied, not full.) As the waiter delivered our check, he also brought these jealousy-inducing treats: tiny red velvet cupcakes topped with a cream cheese icing. Two delightful bites of fluffy flavorful cake and a smooth, sweet icing (our personal favorite flavor!); a delicious surprise, and a perfect ending to the meal. 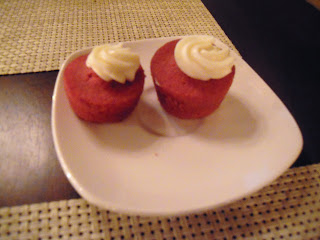 As we left the restaurant, the owner/chef Mitch Prensky personally thanked us for attending the dinner, and his wife was often seen checking in with many of the tables. This personal touch was much appreciated, and yet another reminder of why we love Supper. Overall, we agreed that it wasn't the best meal we've ever had- too many small problems- but for a one-time meal, it is quite understandable. A restaurant typically serves the same dishes night after night, and throwing the kitchen for a loop must be a difficult endeavor. The highlights of the meal certainly left me with pleasant memories, and I'm happy to have spent my "hard-earned" money on this meal.
Posted by Julianne at 11:31 AM