Just a few weeks after our return from our honeymoon, I spotted an online deal for Jamaican Jerk Hut.  Even though these pop up every now and again, I'd never felt the need to partake.  I've been to the Jerk Hut at least twice before but had never ventured too far into the menu.  However, since I was in full-on Jamaican withdrawal, I had to buy it.  We recently had a chance to cash it in, and headed to dinner a bit early- the small dining room up front can fit about six small groups, although in the summer there is pretty much unlimited space in the adjacent grassy lot (often with live music!).

Although the Jerk Hut may be somewhat infamous (or not?) from its role in the movie In Her Shoes, it doesn't seem to have a ton of faithful fans now.  The majority of their business seems to be takeout and delivery, and those dining in are almost always toting an online coupon (never a sign of a successful business).  It seems one of the main problems is the service- food is slow to arrive, waiters disappear for extended periods of time, etc.  But, in Jamaica, everyone runs on "island time," which essentially means you'll wait and you won't mind (I mean, you're in Jamaica!).  Doesn't seem to translate well to the United States, as our always-in-a-hurry mentality prevents us from accepting slow service.  Fair enough- I don't love to wait either! 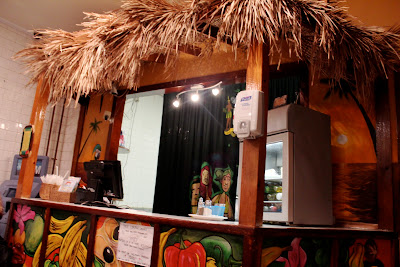 The restaurant seems to get by on just the basics- a small front counter with a soda cooler, plain chairs and tables, water served in plastic cups, and a single server.  Although we ended up waiting for about ten minutes once we were seated, it seems we timed our arrival poorly, with two larger groups ordering just before us.  Otherwise, the service was just fine- definitely no complaints. 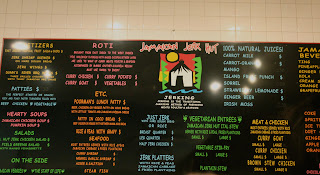 The menu is full of Caribbean treats, from fresh made juices to the classic Jerk chicken, with every native fruit and veggie side in between.  Prices are a bit higher than I'd expect ($20 for a plate of jerk chicken seems a bit steep), but we ended up choosing lower-priced items.

You CAN'T go to a Caribbean restaurant and not order patties.  One chicken and one veggie (they were out of beef) for the table-- you can imagine who got which ($2.50 each). 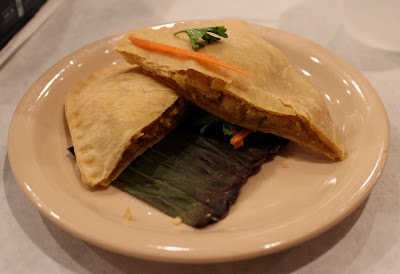 The patties were made with an excellent dough- these aren't thawed straight from the freezer.  The crust makes or breaks the patty, and thankfully here we had nothing to worry about.  Essentially a meaty handpie, the chicken is finely ground and mixed with subtle spices.  I prefer beef over chicken, but after three months without, we were happy. 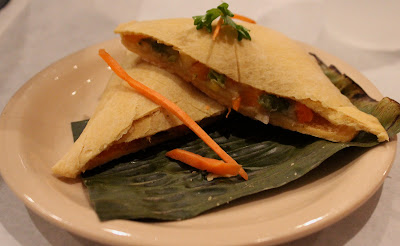 The veggie patty is made with the same thinly rolled butter crust, but is filled with a mix of chopped vegetables (which MAY have come from the freezer) - corn, peas and carrots were easily identified.  A great example of how Jamaican cuisine is extremely vegetarian friendly.

Since I really wanted jerk chicken but wasn't prepared to spend two-thirds of my coupon on it, I went with the Jerk Chicken Salad ($10).  And... I was surprised with my new nomination for best salad in the city.  The salad starts with a huge base of spinach- the thicker, more mature leaves with more chew and flavor than baby spinach.  Strips of green and yellow bell pepper and some shredded carrot kept things crisp and crunchy, and a light coating of a mango dressing was evenly distributed.

Thinly sliced onion wasn't my favorite addition-- I picked most of it out, but a small price for such a superb plate.  The obvious winner here was the jerk chicken- boneless strips of breast meat grilled and tossed with the thick, spicy jerk sauce that makes my mouth water just looking at it (spicy! so spicy!).  I can do a number on a salad, but this one was too much- I couldn't quite finish it (even though I desperately wanted to!). 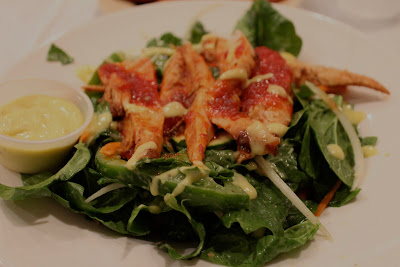 Part of the problem came from the side dish I also decided to tackle  Even though I equate fried plaintains to growing up in Cuban-populated Florida, Jamaicans make just as good of a grilled banana.  Thick, plump plaintain slices are deep fried until softened, and coated in a good shaking of salt (seriously, try it!), they make up one of my all time favorite foods.  So-- you can see why I couldn't resist a side order of them ($3)! 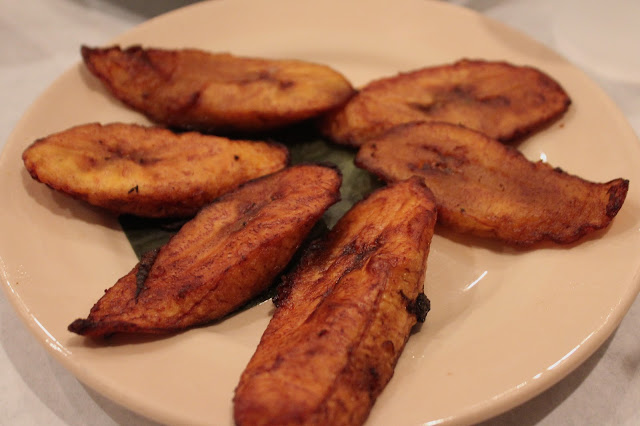 Since our Jamaican vacation was in Ocho Rios, we became intimately acquainted with one of Jamaica's most well-known tourist spots- Dunns River Falls.  Located just a few miles from our resort, the Falls are a beautiful sight to see- AND an adventure to hike up.  The Jerk Hut has named a dish after this locale; whether it's founded on a particular regional recipe, we're not sure.  The Dunn's River Falls BBQ Chicken is stewed on the bone, although it doesn't take much for the meat to fall right off.  Coated in a tangy barbecue sauce, the spice level is definitely way lower than the Jerk chicken- great flavor for those who can't tolerate quite as much heat. 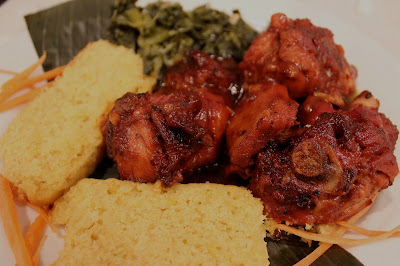 The platter is served with greens slowly stewed in coconut milk (need to try this technique ASAP) and a generous slice of dense, sweet corn bread ($15).  It almost seems like down-home Southern barbecue- but with a special touch of Jamaican lovin'. 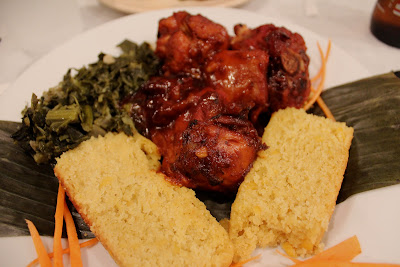 Even without the coupon, we ended up getting a TON of food for a reasonable price.  Our waitress worked hard to keep up with the small dining room, and the casual atmosphere made for a fun, relaxed date.  Over dinner we also decided to return to Jamaica for our one year anniversary- but I know we'll be back to the Jerk Hut before then to get us through the wait.

Jamaican Jerk Hut (online menu appears to be catering menu only)
1436 South Street
Posted by A and J at 8:08 AM