I recently noticed an announcement made in the Philly food blog world concerning the Old City Havana-outpost, Cuba Libre. As the restaurant has reached its 10th anniversary, the menu was recently reworked. For the first week, everything was being offered for a discounted price in order to compensate for any screw-ups in the kitchen. A foodie friend made reservations for brunch, and though A was out of town, I quickly secured my spot. Though I have heard mixed reviews of Cuba Libre's food, and the restaurant is actually a chain (boo), the atmosphere is charming and I'm typically game for an all-you-can-eat brunch. 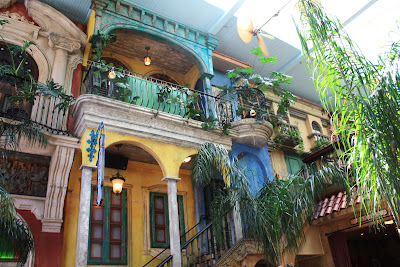 The description of Brunch Without Borders is "30 all you can eat piqueos (small plates)" which had me thinking it would be somewhat of a Lacroix type set up- tiny plates of many different tastes spread out on a buffet. But no. This was literally "order absolutely anything you want off the menu with no limits on time or quantity." We quickly formulated a plan- no double-ordering, and everyone must share. This allowed our group of 4 to work through a solid 70% of the menu. 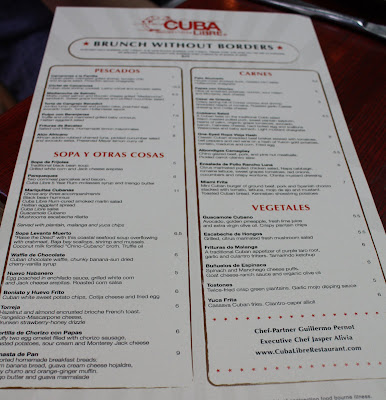 I'll try to be light on the words, and am including the a la carte price of each dish. Up first for me: the medianoche de salmon ($6.50), essentially a salmon and Boursin cheese sandwich. Thin crustless bread encases these two ingredients and gets a good press, melting the cheese and crisping up the exterior. Simple and delicious. A few grape tomatoes and pickled cucumbers rounded out the dish but seemed a little on the random side. 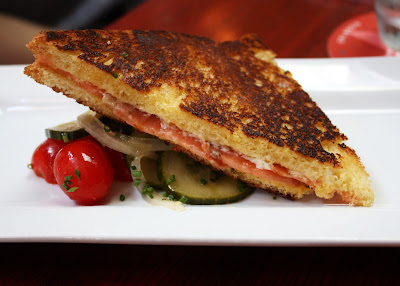 Another memorable first round dish was the Torta de Crangrejo Benedict ($7). Here, a layer of mashed avocado stabilizes a crab and potato cake, a poached egg, and the most amazing part- a tomato Hollandaise. The sauce was so creamy and rich, with the sweet tomato adding an extra element that was surprisingly powerful. Combined together, these ingredients made this dish a fan favorite. 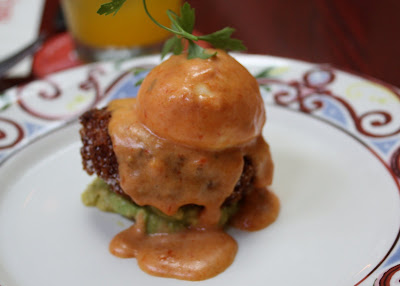 One of the "safer" dishes was the Miami Frita ($7), a burger made with a combination of beef, pork, and chorizo. Served on Cuban bread alongside a handful of shoestring fries, it's definitely an economical choice. I'm somewhat opposed to burgers cooked to well-done, so I didn't try this, but I didn't hear any complaints. 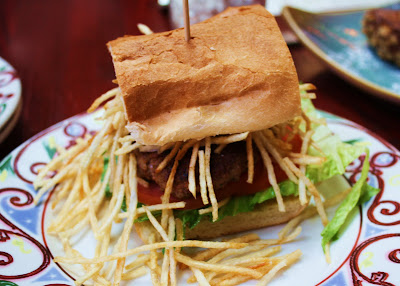 Oh, man. The next dish was probably my overall favorite- the Torreja ($6), a thick slice of brioche dipped in egg and encrusted in hazelnuts and almonds. The french toast is drenched in a sticky sweet strawberry honey glaze and topped of with hazelnut scented Mascarpone. The recurrent hazelnut flavors definitely upped the ante on this standard brunch dish. 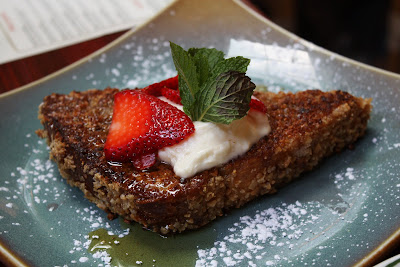 Plantains are always a must, so of course we tried the Tostones ($5), which were thin fried patties of the green plantain variety (not sweet). The chips themselves were a little bland, as green plantains often are, but the mojo dipping sauce was stellar- a somewhat spicy garlicky sauce with hints of mint. 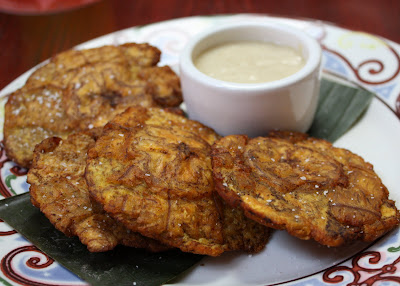 Another dish I didn't try was the One-eyed Ropa Vieja Hash ($9), large shreds of brisket slow cooked with peppers and and tomatoes. The hash aspect is the base of potato, plantain, and corn. A perfect fried egg tops the dish, bringing it back into the realm of brunch. I appreciate the somewhat unique twist on ropa vieja, but I got the idea it wasn't the best ever- perhaps because it was somewhat untraditional. 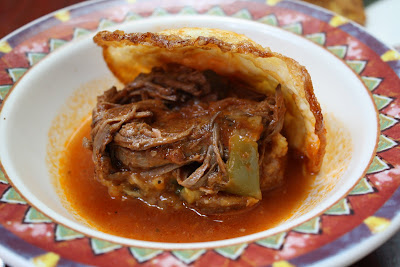 Back to the breakfast side of things- the Panqueques ($6), which obviously I commandeered. Two massive corn pancakes, three pieces of bacon, a scoop of mango butter, and rum maple syrup. I usually avoid anything rum-flavored since they tend to have that artificial aftertaste. In this case, the syrup involves a 5 year rum, adding a deep, rich molasses flavor. The pancakes themselves were not all the way cooked, a kitchen snafu that I enjoyed. 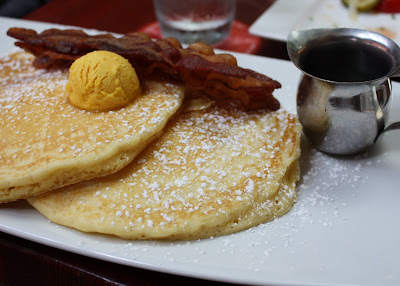 I tried to even out all the heavy breakfast dishes with a salad- the Ensalada de Pollo Rancho Luna ($6). Cold shredded chicken (a good mix of dark meat and white meat) is mixed into an assortment of veggies, including cabbage and cucumbers for some cool crunch. The dressing had a thin buttermilk base and a hint of citrus, but overall the salad somehow seemed a little bland. 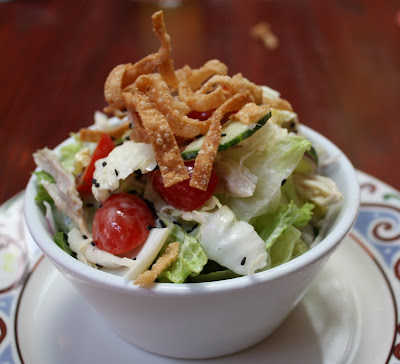 The Guacamole Cubano ($5.5) was another must-have. Roughly chopped avocado coated with a bit of olive oil and lime juice is joined by a not-so-secret ingredient- fresh pineapple. The fruit lightens up the guac, adding sweetness and a change in texture. Breaking pieces off the long strips of crispy plantains made the perfect dippers. Yum. 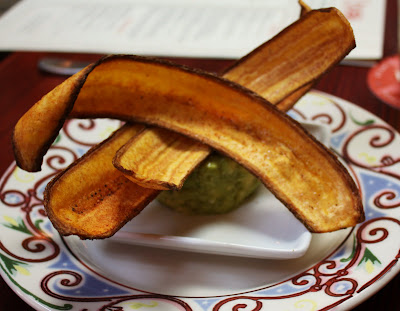 A smaller dish off the meat section of the menu was the Pato Ahumado ($6.5), thin slices of house-cured duck. The already super savory flavor of duck becomes overwhelming after a rendezvous with a smoker. A sauce made from (I'm gagging) a corn fungus thankfully didn't touch my piece. 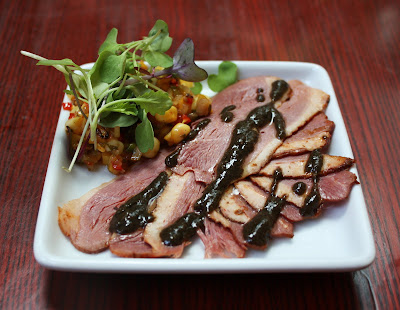 Atun africano ($8) was another potentially plain dish elevated by its accompanying sauce. Gently seared tuna is coated with a spicy adobo rub, sliced thin, and drizzled with sweet and sour Meyer lemon juice. The avocado salsa was outstanding- a spicy tomatillo salsa verde pumped up by the creamy fats from the avocado. More pickled cucumbers and onions again seemed a little out of place. 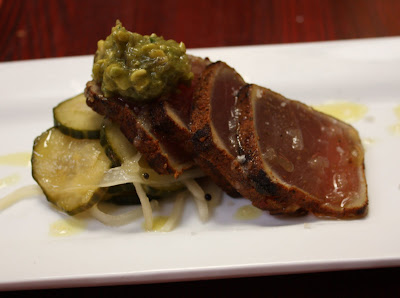 My favorite amongst the savory dishes was the Pulpo con Berenjenas ($7.5)- a slew of whole baby octopus marinated in citrus juice and a bit of truffle oil and grilled- my favorite cooking method for seafood. I popped a whole one in my mouth, and the meat was so tender, salty, slightly smoky, and totally eyes-rolling-into-the-back-of-your-head inducing. I didn't try the Haitian eggplant salad at the bottom of the bowl, but the idea sounds interesting. 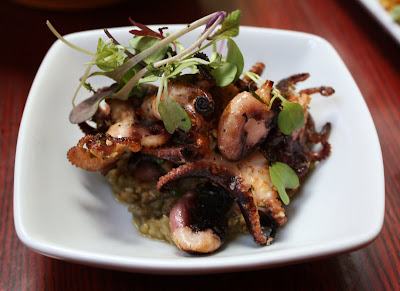 The Boniato y Huevo Frito ($6) had an interesting timeline on the table. At this point I was approaching capacity, and the idea of fried disks of potato didn't do much for me. Eating a few off the top confirmed this. However, the all-you-can-eat format of the meal discourages leftovers (don't order more than you can eat) so I forged on. I broke the egg yolk over the potatoes and stirred up the salty ones from the bottom. Sprinkles of cotija cheese melted a bit and everything came together to make a crispy, salty, cheesy, egg-yolky delight. Because really, a runny egg yolk makes EVERYTHING better. 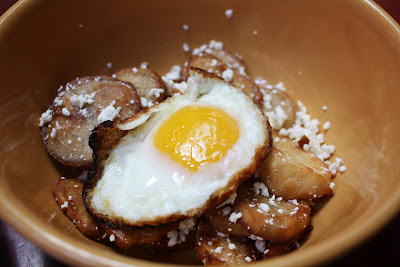 One of our least favorites was the Cesar de Oriente ($6), a small cup of rather plain Caesar salad and a thin crispy spring roll, which apparently contained chorizo and shrimp. I thought the insides seemed mushy, like overcooked sweet potato- whatever it was, the flavors of chorizo and shrimp were not apparent. 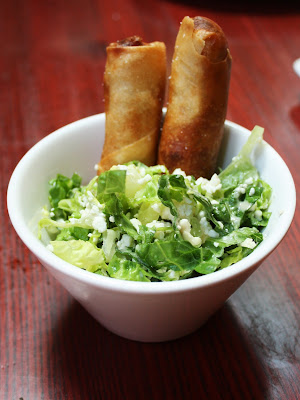 Another thumbs-down dish were the meatballs- Albondigas Camaguay ($5.5), two golf balls of ground beef, pork, and pine nuts. Completely covered in an unappetizing "chino glaze" the dish was not very appealing, though I can't speak for the flavors. 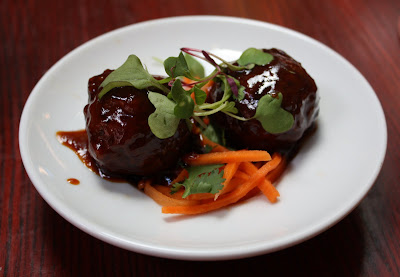 The classic shrimp cocktail ($10.50) was anything but classic- huge fileted shrimp tossed in a spicy citrus-y cocktail sauce. More of the delicious avocado salsa topped off the juicy shellfish. A large boniato chip was a crispy crunchy garnish. It was also on the more expensive side of the price spectrum. 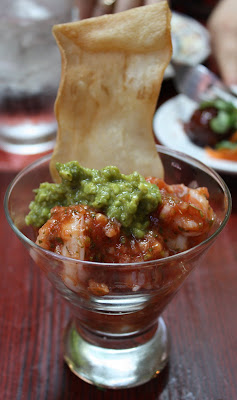 I wrapped up my eats with another sweet dish- the chocolate waffle ($6). Two triangles of dark chocolate scented waffle were topped with a thick dried cherry syrup and slices of banana. While I loved the flavor combination, the texture of the waffle was subpar. No crispy edges, only pillowy soft chewiness. 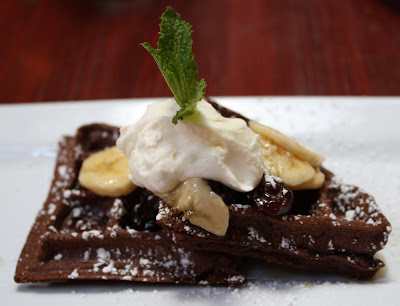 I had eyed the Bunuelos de Espinica ($6), described as "spinach and Manchego cheese puffs," but they were inevitably ordered by another dining companion. We were surprised because these weren't your typical cheese puffs. Or really puffy at all. More like deep green crunchy donut holes filled with soupy Indian-spiced spinach. Not bad, but certainly unexpected. A last minute addition to the table was the Canasta de Pan ($9). Because really, I can't turn down a bread basket. A crunchy, freshly fried churro with a sugary coating had a somewhat liquidy inside, but again, I didn't mind. The orange-ginger muffin was dry and bland. However, the two major winners were the guava cream cheese hojaldre- a mini turnover that was light and sweet- and the banana bread. Extremely dense and thickly sliced, just the way I like it. A smear of mango butter and guava jam made this little bite out of this world, and totally worth pushing myself over the edge from full to stuffed. 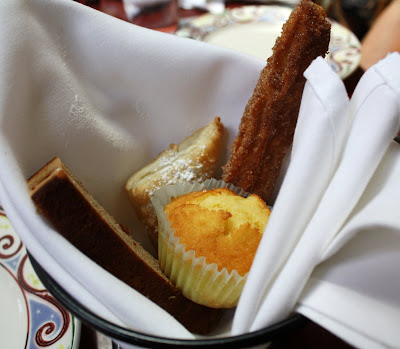 I'm still totally amazed by this meal. We tried so many different dishes (a few that weren't even mentioned here), and while some were hit or miss, the majority were incredibly delicious. The Cuban aspect to the meal gave the dishes fun and enjoyable twists. Our waiter was fantastic, tolerating four rounds of ordering and suggesting different items to try to round out our meal. For the price (especially with our first-week discount), this is BY FAR the most economical brunch I've had in Philly. We spent a solid two and a half hours eating, digesting, chatting, and eating some more. A great way to spend an early Saturday afternoon.