Confession: I have a food crush on Peter McAndrews. As the owner of four Philly restaurants, and the creator of some epic sandwiches at Paesano's (so popular they've opened two locations), he even had time to face off against Bobby Flay in a sandwich-making throwdown (and won, duh). I've heard raves about his original spot, Modo Mio, for quite some time but its unfortunate location at 2nd and Girard has kept me away. Until this weekend. And now I'm quite annoyed with myself for not getting down there sooner. 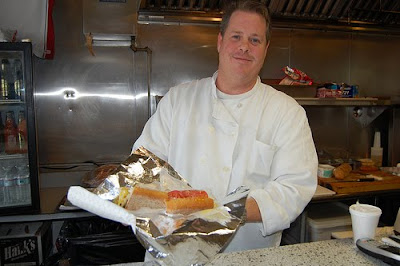 One of my "foodiest" friends and a frequent blog meal sharer is in town for the summer, with the added bonus of being a car owner. He agreed to drive us down to Northern Liberties for a 'welcome home' meal. I called about a week ahead for reservations and had trouble snagging an 8PM spot- apparently while I'm (once again) late to the game, the rest of Philly isn't.

The space is pretty small, with only a few windows letting in natural light. The "front of house" doesn't have a full time hostess, and doubles as a bread serving/slicing station. For such a small place, there seem to be quite a few employees, and we were initially checked on by three or four of them before being assigned a full time waitress. Service was never a problem, although the meal proceeded at a snail's pace (my favorite). Before ordering, we were given a little bite- a sundried tomato bruschetta. I'm always a fan of a pre-meal snack, especially at 8 PM! 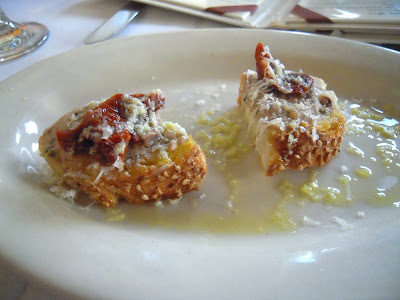 The menu is split between appetizers, pastas, and entrees, or you can do the four course "turista" menu for $34 (one of each plus dessert). This was a no brainer-- and one of the best deals in the city, hands down. The menu continuously changes, allowing a new experience every time you dine. 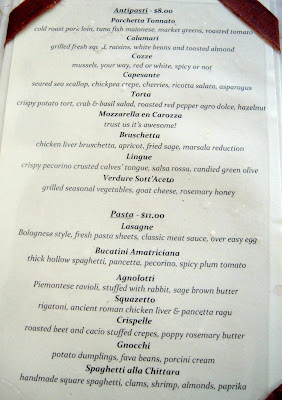 After making our decisions, our waitress handed us some freshly baked bread (from an oddly shaped, enormous loaf that sits up front)-- all of the bread, pasta, and desserts are made in house. The bread is dense and nutty, with slight char around the crispy crust-- perfection on its own, but also a fantastic vehicle for the truffled olive oil and smooth ricotta served alongside. 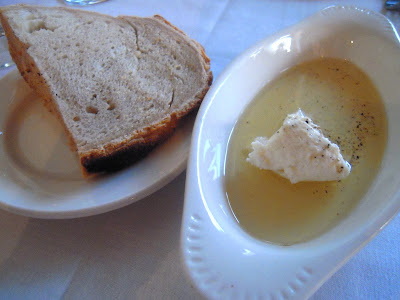 I started with the scallop appetizer (or Capesante. Also of note, all appetizers are priced at $8 a la carte). Two large scallops are served on a bed of a thin chickpea-flour crepe, folded into a fan shape. Bits of chopped asparagus are countered with sweet cherries and salty chunks of ricotta salata. The oil based dressing added another dimension, but the scallops themselves weren't overwhelmed-- each well cooked, meaty bite was much enjoyed. 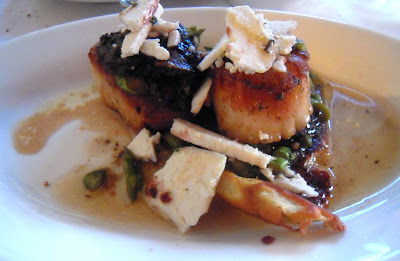 My friend went with a potato torte, a cake like construction made from slices of potato topped with an impressive crab salad. The large chunks of crab were tossed with basil and roasted red pepper, creating a summery finish to what could have been a heavy starter. 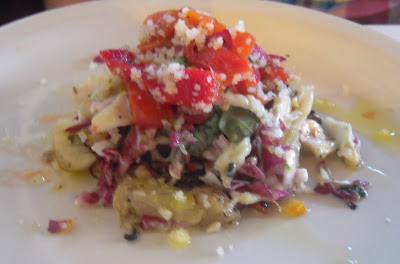 After a long lull (the time between courses was sufficient to make room for the next, as well as just enjoy the evening, but not long enough to worry that there might be a mishap in the kitchen), the pasta courses were served ($11 a la carte). My Bucatini Amatriciana looked like a pile of spaghetti with tomato sauce but was infinitely more. Bucatini is made with a tiny hollow in each strand, giving an extra doughy bite. The flavor and freshness was intense- I rarely have fresh pasta but can always tell the difference. The sauce was super spicy, leaving a pleasant burn with each bite. Chunks of pancetta leant the entire dish a smoky meatiness- overall, the dish was a clear winner. The portion was enormous (I could have made this a meal in itself), so I ended up leaving a lot of it uneaten. Remembering the flavor and looking at the picture, I'm currently regretting this. 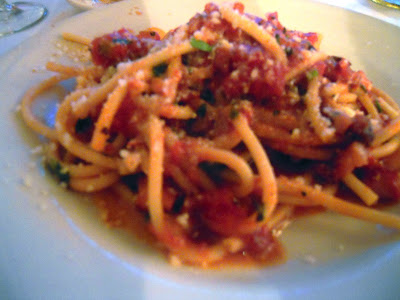 Across the table, my friend was enjoying a decadent rigatoni dish made with chicken livers and pancetta-- the rigatoni alone was easily worth $11. Fresh, doughy pasta, I love you.

Moving onto our main entrees, I was eyeing the whole branzino, but was turned off by the fact that they won't debone it AND it's a $5 surcharge on the prefixe. Probably still a good deal, but I went with a fish alternative- the monkfish (entrees range from $15-19). The other options hit every type of animal product possible- skirt steak, duck, veal, lamb, sweetbreads, and more, with a single vegetarian option (eggplant). The monkfish is served as two small filets, pan cooked with an ever so subtle breaded coating (perhaps just dipped in flour?). It was definitely not fork tender, awkwardly requiring the use of my butter knife-- not sure if this is typical of monkfish or just because of the preparation. It's served over and under a sauce heavy on tomato, with a few bits of wonderfully earthy porcini mushrooms and.. walnuts. I love nuts, but I've decided that fish and nuts don't go together. Altogether, the dish was flavorful but the toughness of the filet and the nuts made this my least favorite part of the meal. 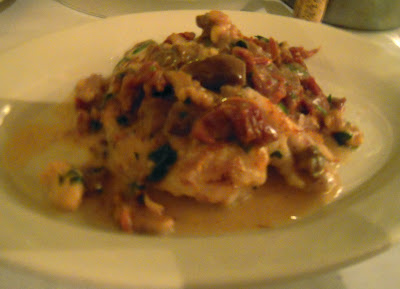 Our waitress described the dessert choices of the night (no dessert menus!) as we approached the end of our third hour of eating. Most of the dessert options are classic Italian-- tiramisu, panna cotta, etc, which typically aren't my favorite. I found the ricotta torte with black pepper and fig jam to sound the most interesting, so took a gamble and made it mine. The desserts are made in house, and thereby have a bit of a homey look about them-- both my torte and my friend's panna cotta looked like creations out of my own kitchen. The flavors were clearly professional though-- the smooth ricotta was slightly sweet (and thankfully not salty), with the black pepper creating a very subtle burn. Figs and ricotta are always BFF, and the jam created a friendly fruity flavor burst. The panna cotta was also sinfully smooth, and paired with sweet strawberries, was a perfect summer treat; I might now be a classic Italian dessert convert. As long as they're coming out of Peter McAndrew's kitchen. 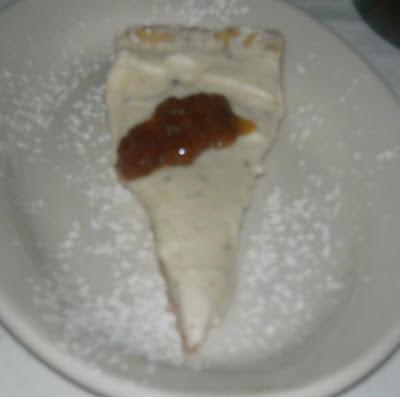 Yeah, you can laugh.

I left pleasantly full but not stuffed, and practically shouting my love for Modo Mio down the streets. It might just be my next date spot, and is good for small groups-- there were at least two birthday celebrations while we were there. The amount and quality of the food you receive here would easily be worth $60+ at other (subpar) places around town- perhaps the location brings down the price a bit. We were also lucky enough to have Mr. McAndrews himself in the kitchen, and he took the time to greet each table- I might have been a little starstruck when he stopped by ours. I'm also looking forward to trying his newest spot, Monsu, located in the Italian Market. And I'm always craving a Paesano's sandwich! Like I said.. food crush.