Living in the suburbs*, I am more inclined to hit a chain or non-local restaurant.  Whether it's because I have less options or more accessibility, I'm totally fine with it.  I've been absolutely loving living within five minutes from a beautiful new Target (my bank account, however, is not as happy with this), which sits adjacent to a string of popular find-them-everywhere-but-they're-still-good-right? eateries.  It just feels so.. suburban!

The timing was just right for an invitation to sample some of Pei Wei's new menu items.  Pei Wei is essentially P.F. Chang's less busy, more casual little sister.  While we've only been to P.F.'s once in our lives, we can see the appeal- it's like an Asian Cheesecake Factory, with a pages-long menu and enormous, satisfying portions.  Pei Wei is much smaller, with fewer options, and a more basic street food and noodles menu (read: also cheaper!).  Order at the counter when you walk in and find a table to await your selections. 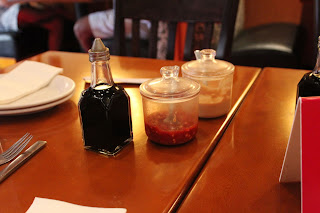 The decor makes an attempt at providing an authentic Asian experience, and the open kitchen is a nice touch.  You can tell the chefs aren't just microwaving your meal!  While we were invited specifically to try the lettuce wraps, we ordered a few items to supplement.  We brought along our chauffeur  my husband, who ordered the sweet and sour crispy chicken, served with your choice of white or brown rice ($8.35).  Just about what you'd expect for the dish, with large chunks of breaded and fried chicken, fresh vegetables, and pineapple tossed in a sweet glaze.  A bit better than a food cart or your corner Asian take-out restaurant- it just tasted fresher. 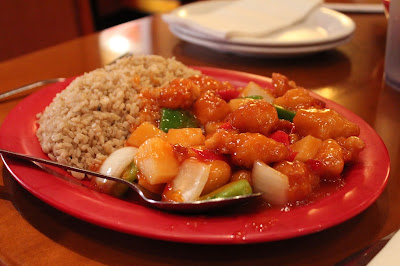 We also ordered the Dan Dan noodles, a huge portion meant for sharing served with the namesake spicy meat sauce, crispy cucumbers, and bean sprouts.  Decent flavor, but who are we kidding, we made a bad choice.  No Dan Dan's will ever live up to Mr. Han Chiang's, so obviously we were a little disappointed. 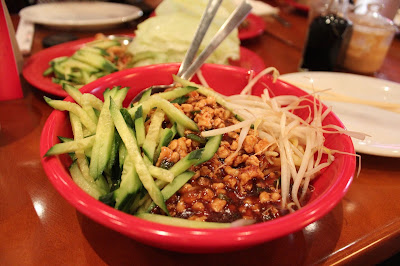 The lettuce wraps definitely fared much better.  Like the sweet and sour chicken, you could instantly recognize the freshness of the dish- look at those lettuce leaves!  Although iceberg lettuce isn't our first choice for salads, it's perfect for these wraps as the high water to flavor ratio gives you a crisp, crunchy, refreshing blanket for the spicy filling.  We ordered two versions, the Korean Steak wraps and the Thai Chicken, both relatively new on the menu.  The chicken was J's favorite, with a ton of Thai flavor from the chopped cilantro and mint, as well as a citrus-y sauce ($6.95).  I don't often think of Thai food as refreshing, but this definitely was! 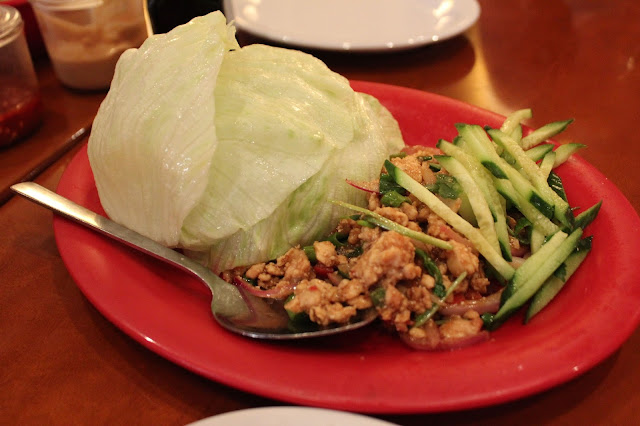 I preferred the Korean Beef, since I'm minorly obsessed with the flavors of Korean BBQ ($7.75).  There's just something about that rich, dark, and spicy chile sauce, and it goes particularly well with red meat.  Both dishes also had a fair number of fresh veggies as well, including cucumbers, carrots, and bean sprouts to bulk up the dish while keeping it light. 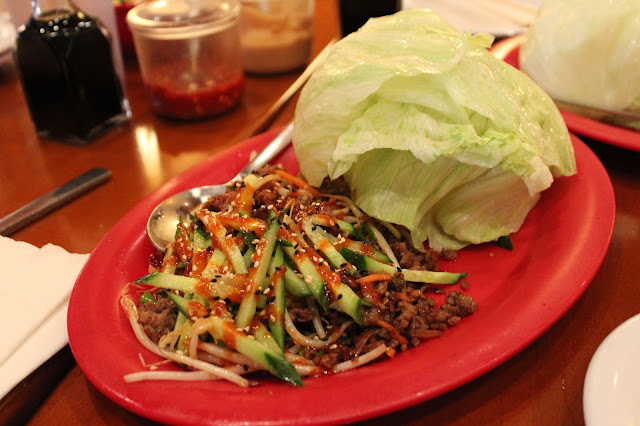 The lettuce leaves were perfectly cut to make construction of the wraps super easy, although a few more pieces per plate would have being great-- it's dangerous to overstuff them! 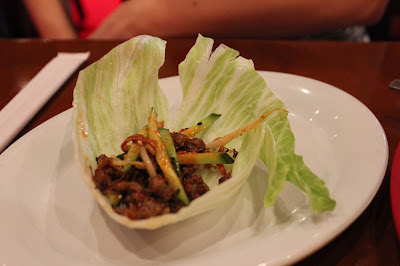 While the flavors were way better than I expected, I also could have used slightly larger pieces of meat.  I can see the benefit to shredded meat in a wrap (the smaller everything is, the easier it is to roll up), but the tiny shreds of chicken and beef didn't hold as much flavor and moisture as larger chunks might. 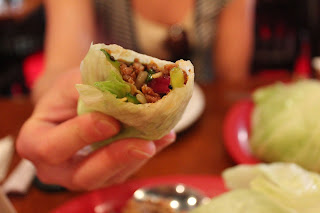 If I was out shopping and stumbled upon a Pei Wei, I wouldn't hesitate to drop in for a quick meal- it's super inexpensive and I like knowing I'll get a freshly prepared meal.  The lettuce wraps are also a great healthier option- you still get the flavors you're craving without a huge bowl of noodles or rice.  Thanks to Pei Wei for inviting us to give it a try!