Awhile back now (a few weeks?), a friend and I stopped in for dinner at CHeU Noodle Bar.  With a name like that, you might expect a Chinatown location, but this small (read: a handful of tables and a long bar) spot is tucked onto 10th Street within a stones throw of Thomas Jefferson University, amongst good neighbors Kanella and Varga Bar. Although the menu is certainly inspired by Asian cuisine, the "two dudes from Philly" that run the place rely heavily on creative liberties.  Although the space is small, it has lots of personality: plenty of light, wood paneled walls accented by a giant collage, and the bar looks over the cooking space for those who like getting in on the action.

With the relatively small number of seats, service is great- almost everyone working seemed to check in on us from time to time. A large glass vase of chilled water was a nice touch on a hot summer day.  The menu seems to change constantly, and there are also daily specials announced on a chalkboard.  The fried chicken bun-of-the-day was an easy choice to start ($2.50).  Don't expect a traditional pillow-y bun here- they use a thin, English-muffin inspired bread to encase your filling of choice.  In this case, a perfectly breaded and fried puck of juicy chicken was accented by tangy quick pickles and a touch of sweet and spicy BBQ sauce.  Every flavor was perfectly balanced- this actually ended up being the highlight of my meal.


We were also enticed by the dumplings in chili oil ($4), a regular on the menu but with rotating fillings.  That particular day was "pork and pickles" so there were a lot of similar flavor nuances there as in the bun.  Although I preferred the crunchy breading of the chicken over the chewier pork, the paper-thin dumpling skins make for a much more exciting delivery vehicle than a thin muffin.  The dipping sauce at the bottom was addicting. 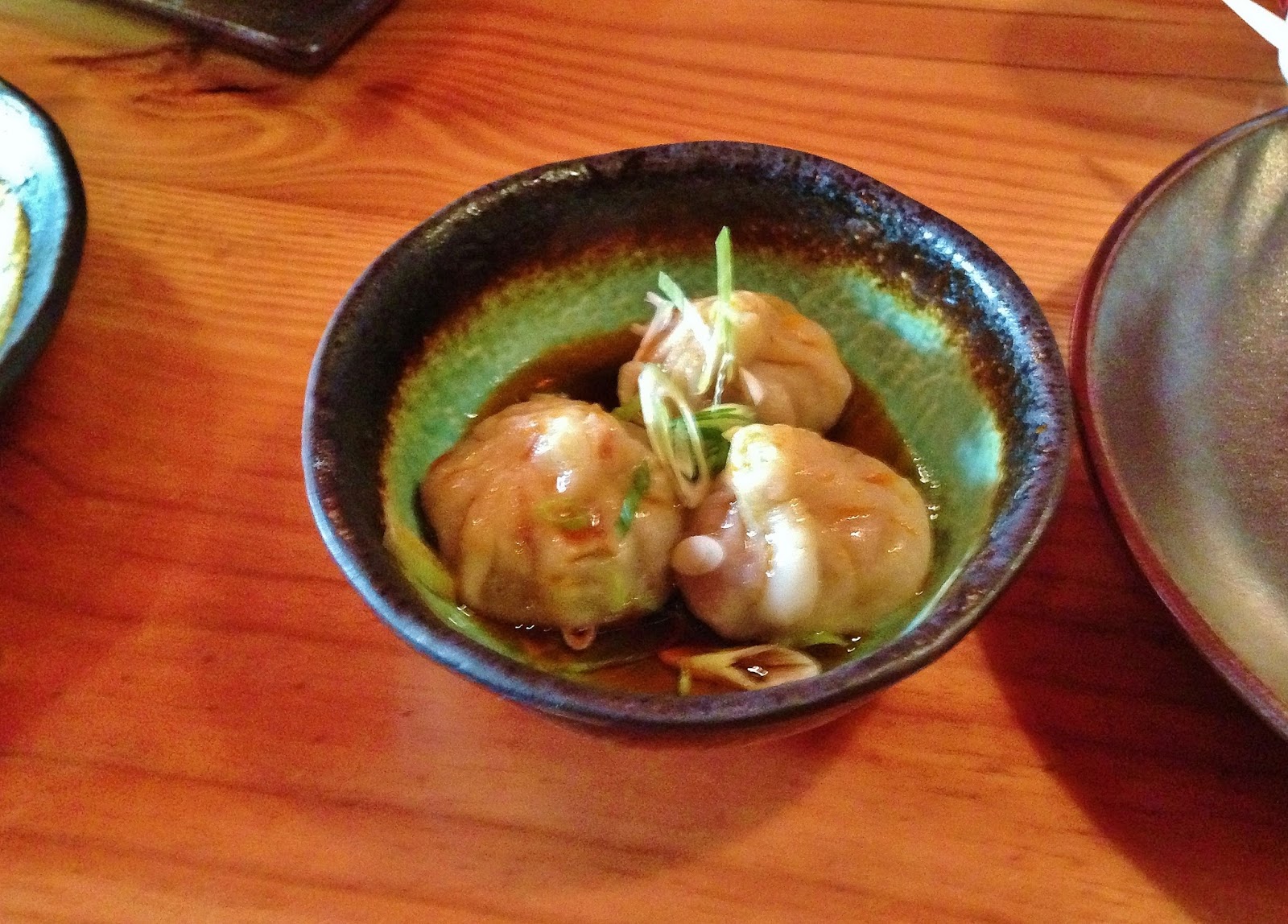 For some reason, we also picked out the BBQ pig tails (apprently going for a southern theme here so far), which looking back was not the best decision after our experience with a similar dish at Alla Spina.  Don't get me wrong- there were some serious deliciousness infused into the crunchy tails.  The peach kimchi had a latent kick that was tempered by the fruit's summer sweetness.  However... it's just not my favorite thing in the world to nibble off little bits of pieces here and there from thick chunks of vertebrae. 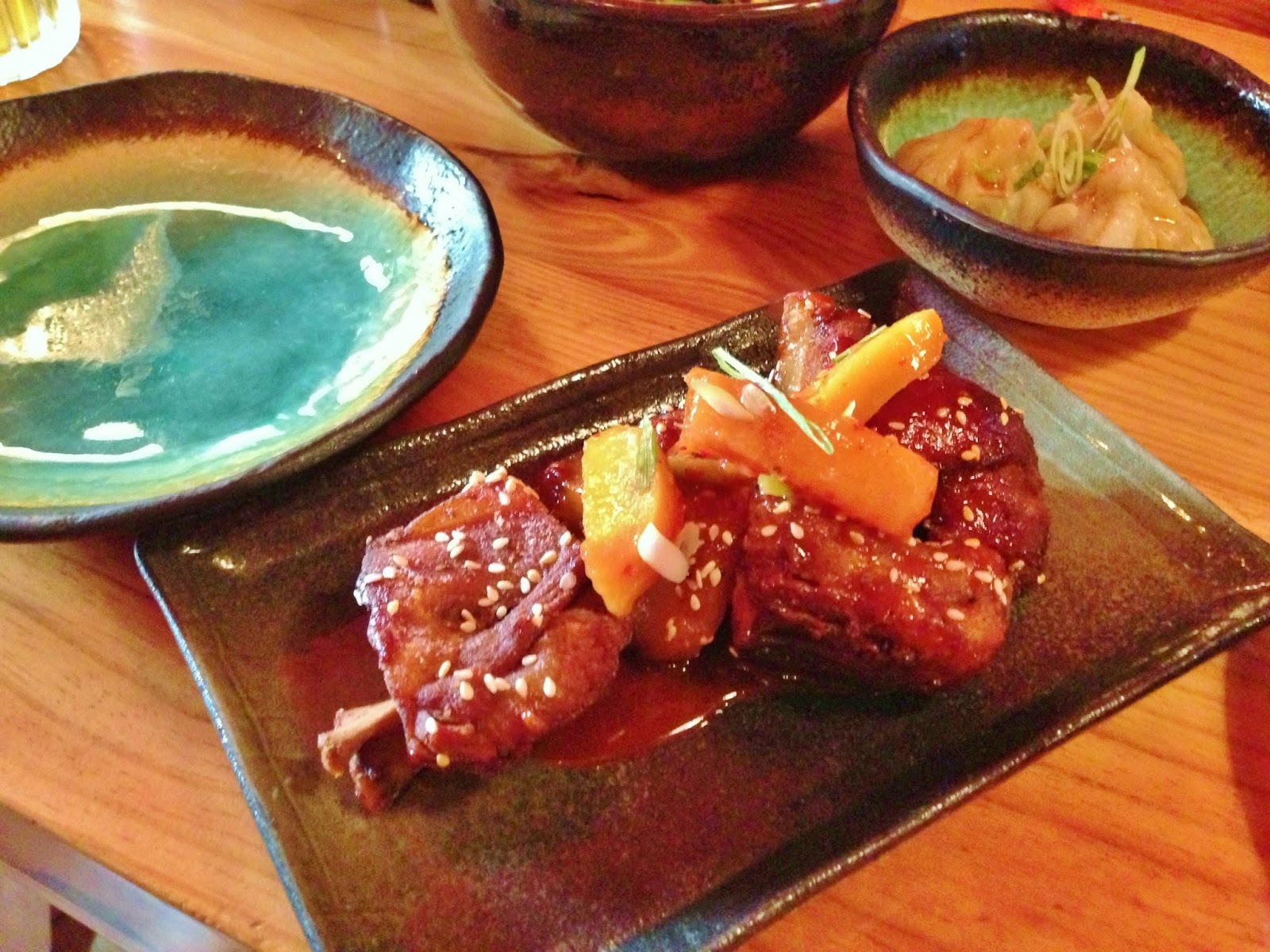 It definitely is my thing to eat wings though- the meat to bone ratio is much better.  The black garlic wings ($8) are a commonly raved about item around the internets, and for good reason.  Extra crispy, coated in a mild black garlic puree with a touch of sweetness, and accented by a squeeze of lime juice, sesame sesds, and a few sprigs of cilantro.  The shishito peppers were a bit confusing.. not quite sure how to eat a wing and a pepper at the same time, but maybe that's not the goal here.  The portion size is also quite small- only five wings to an order.  However, the uniqueness of flavors definitely increases the value factor- you're not going to get these anywhere else. 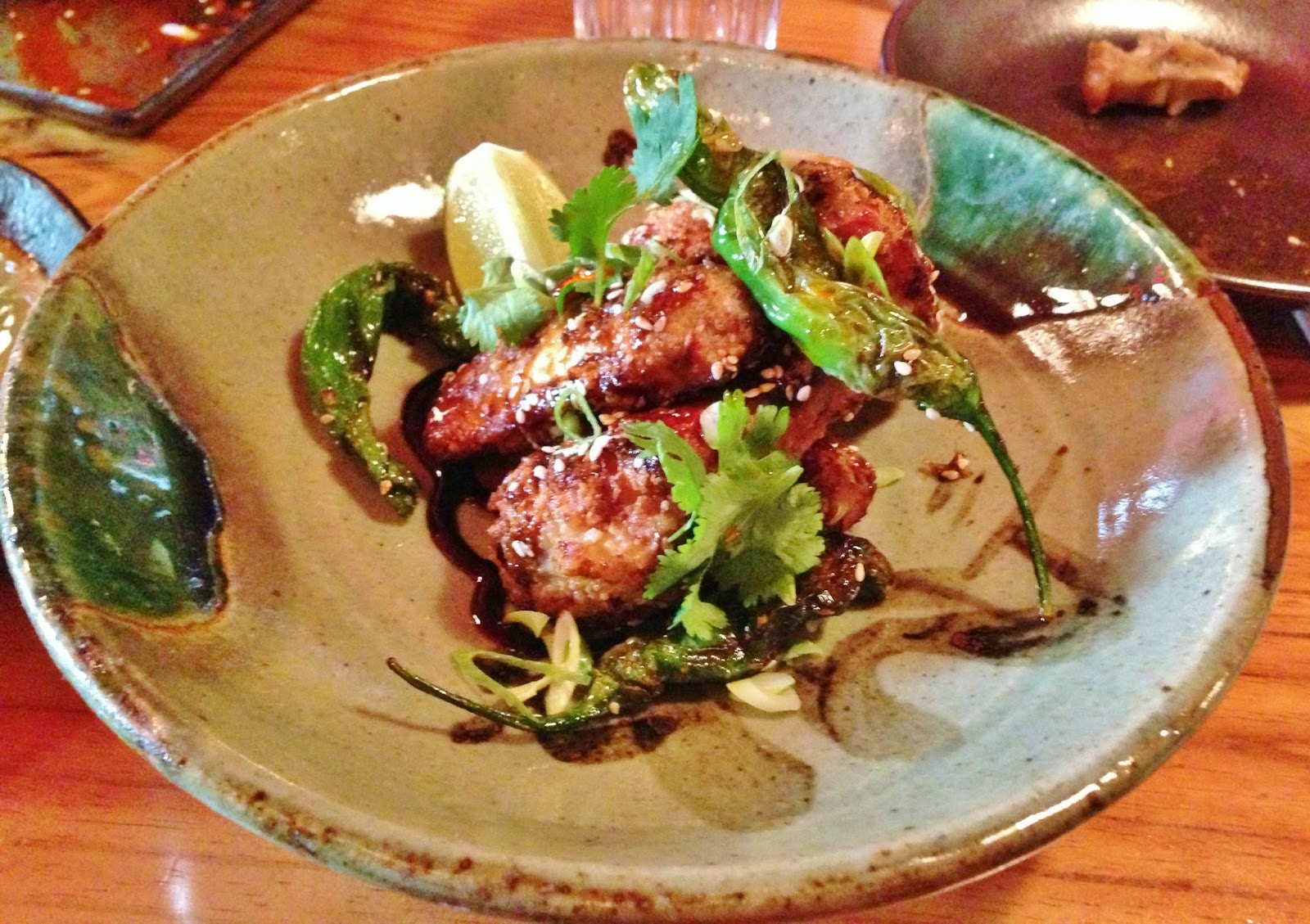 We went a little crazy with the meats, so I needed to balance that out with something green.  A big bowl of broccoli ($7) hit the spot.  Steamed and then sauteed in a soy-based sauce, the broccoli had plenty of crunch and just the right amount of little charred spots.  Crumbled spicy Vietnamese sausage and crushed peanuts rounded out the dish.  This is probably not the most veg-friendly restaurant in town. 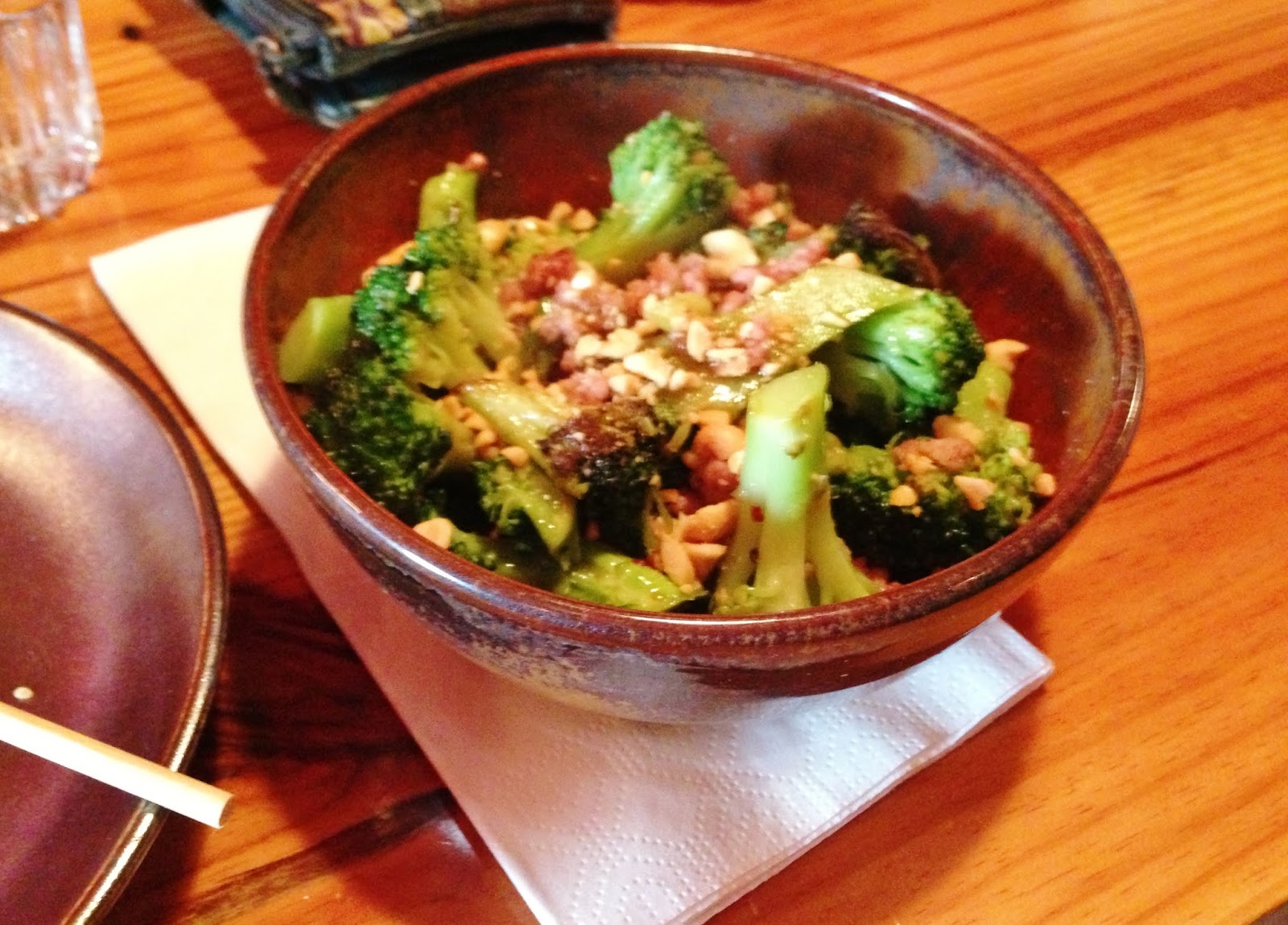 Obviously, as per the name, the main fare involves noodles.  I chose the miso cod ($12), a big bowl of onion-based broth, plenty of chewy and pliable noodles, and accents of cilantro and pickled Thai eggplant.  The strip of cod was flaky, soaking up lots of moisture and flavor from the broth, but also standing up well alone with a satisfyingly sweet and salty glaze and a sprinkle of sesame seeds.  The way it was served made it difficult to incorporate the fish into the noodles, but the flavors were all spot on.  Noodle-wise, the pros over at Nan Zhou have 'em beat- these seemed a hair overcooked for my preference- but overall a solid bowl of food. 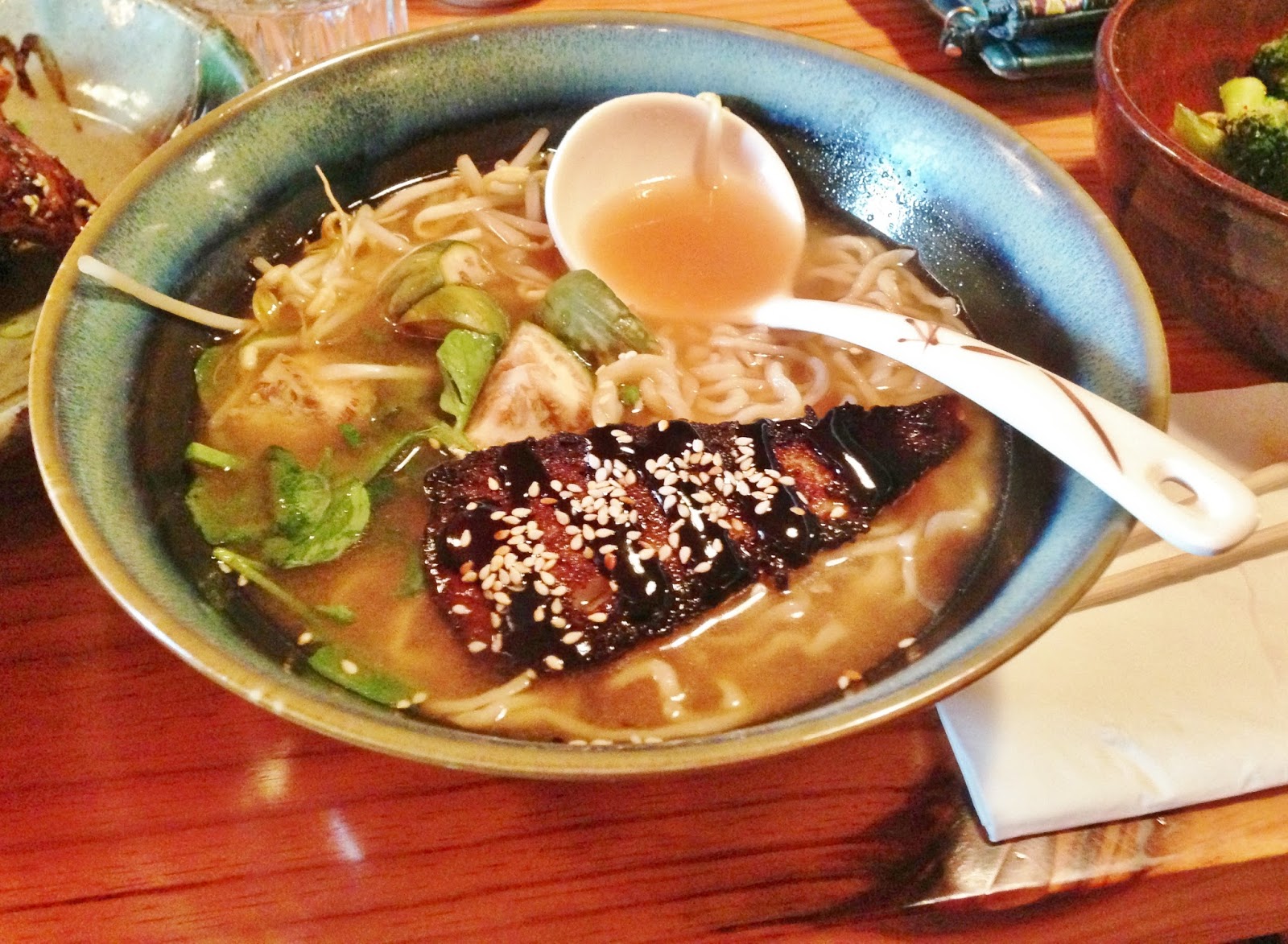 While our meal was by no means perfect, the guys at CHeU seem to be having a really fun time with flavor combinations, something I appreciate more than any other aspect at a restaurant.  I have to mention the service again because it was great- everyone seemed happy to be working and the vibe was just really upbeat.  I would recommend sitting at the bar if there's just two of you; the interaction with the staff is worth it.  Hope to be back soon (especially now that scrapple is back on the menu..)!