We clearly spend a lot of time (and money!) in restaurants, but tend to keep our outings for the weekend. This cuts down on expense, and allows for more of a "splurge" feeling; because, on the weekend, you're allowed to spend that hard earned graduate student stipend money and relax on the healthy eating front a little, right? However, sometimes during the week you want a little break from the kitchen, without breaking the bank or ruining all those hours at the gym (we're exaggerating a little here.. we aren't that uptight).

This week, we had the pleasure of checking out a relative restaurant newbie, Pure Fare. Marketed as a quick stop for healthy eats, their website had me pretty worked up-- everything on their menu sounds like something I'd want to make in my own kitchen, relying heavily on plant-based ingredients that are too often neglected in the restaurant scene (quinoa, wheatberries, kale, to name a few). 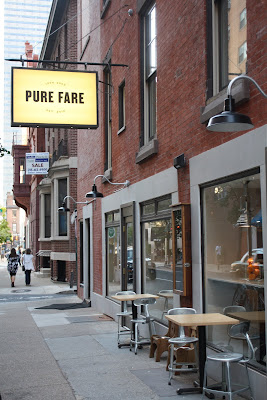 For those a bit wary of veggies, don't fear, there are several options based on lean meats (tuna, turkey, chicken) and cheeses, mostly locally sourced and organic. On top of all of this, the portion sizes are perfect, and all the menu items have been nutritionally broken down for those interested in fat/protein/calorie/sodium content. AND the menu is quite diverse, ranging from soups, salads, and sandwiches to a few choice "entrees", as well as coffee drinks, smoothies, fresh juices, and baked goods.. ALL made in house. Does it get any better?

We visited on a weekday evening, which is currently a pretty quiet time there. The restaurant has only been open for two months, and the owners are still working out the quirks, including hours of operation. Their website advertised a closing time of 8PM but they started closing up shop about an hour early during our visit. The owners (a brother-sister twin team!!) seemed to be running the whole show, with one operating the food side and the other working the coffee/juice side. 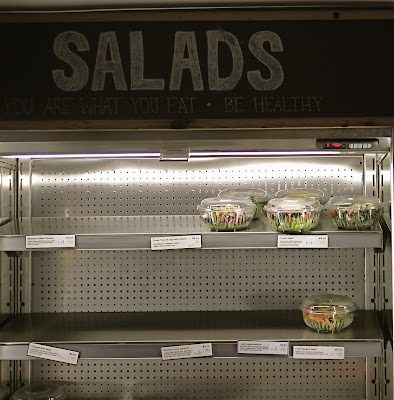 They were both extremely friendly, providing samples when possible, answering questions about ingredients and preparation, and explaining that the half-empty salad and sandwich display shouldn't dissuade us from ordering any of the options of the day (they currently don't make all of the menu items listed online everyday, but select 60-75% on a rotating basis). We chose four items to split, a perfect balance of soup, two salads, and a baked quinoa-based skillet bread.

We started with the soup, the cold cucumber ($4.25) that was perfect and refreshing in the warm weather. Everything is served so that you could easily take it to-go, but we decided to stay and eat at the fun communal table (there is also limited outdoor seating). A generous serving of the frothy cucumber puree is topped with a spicy tomato compote. This is the soup I would try to make at home and hate-- it's so easy to make a watery, flavorless veggie-based soup, but with the addition of fresh herbs (dill and tarragon), creamy Greek yogurt and a bit of milk, I could probably live off of this stuff. The salsa-like topping seals the deal, adding a pop of color and heat to keep it interesting. At 87 calories, this would never be the main component of one of my meals, but works perfectly as a filling "appetizer" or a delicious snack. 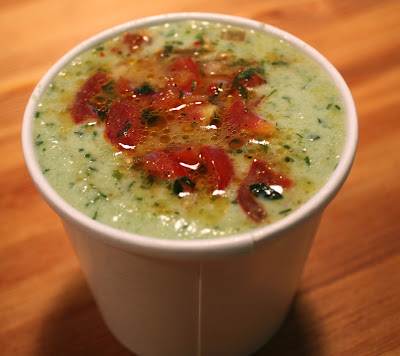 Next up was a prepared salad we snagged off the refrigerated shelf- the wheatberry salad ($6). I'm sort of obsessed with wheatberries in general, so couldn't pass it up-- you almost never see them at restaurants, and they're kind of time consuming to make at home. The dense, chewy, nutty nuggets are served with perfect counterparts- thin slivers of curly kale, soft beets baked with garlic and thyme to complement their earthy flavor, and a honey-sesame dressing. I need this dressing recipe. The menu also lists butternut squash, but if it was present, it was lost in the mix of other high-quality ingredients and flavors (plus, it's slightly out of season?). The nutrition density of this little salad is pretty incredible, but provides its punch with tons of flavor and satisfaction. 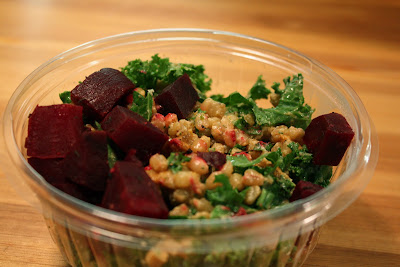 We also ordered a second kale-based salad, but the owner made a fresh bowl as they had sold out during the day. Listed as the "Chopped Kale Salad," it really is so much more than just the green leafy veg- and took us out of the world of vegetarianism with a healthy dose of shredded, roasted turkey chunks and cubes of salty, sharp Lancaster white cheddar. 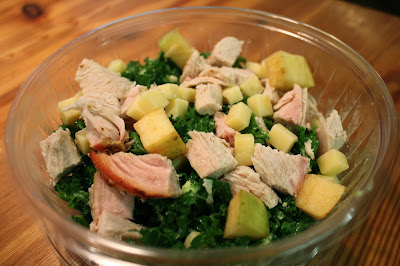 The salad has a sort of fall flavor profile, as it also includes large apple chunks and almond slivers. The dressing, once again, almost stole the show, a creamy lemon-parmesan mix that coated the leaves just enough to be visible but not overwhelming. The parmesan flavor was quite distinct (so yum!), while the lemon worked its magic to soften the kale leaves. 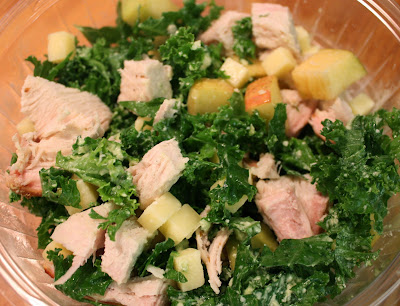 Last out was a new item, named "Quinoa Skillet Bread" ($4.75). A huge chunk (perhaps intended to be more than one serving?) was left on the chopping block, and J and I were lucky enough to snag the entire thing-- better for sharing! The hefty slice contained quinoa, zucchini, red pepper, and onion, all held together with a few eggs. It was kind of a combination of cornbread and frittata.. just without the corn. And with a healthy dose of veggies hidden in there-- perhaps not hidden to the eye, but definitely in the soft, creamy, crumbly texture and the slightly sweet, nutty flavor. This was J's favorite of the night, but I had trouble ranking our eats-- whatever I was currently eating was my favorite. 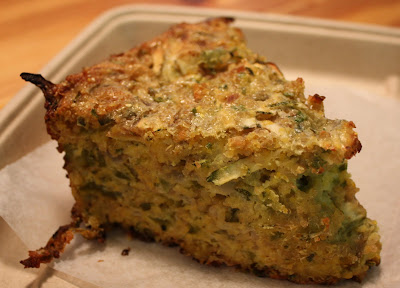 Of course, we couldn't end the meal without trying a couple of their desserts, which remind me of those made at Sweet Freedom Bakery (the Pure Fare owner said the SFB owner had come by to sample!). The Chocolate-Avocado cookie (recently featured on MealTicket!) was calling my name, and J made our second selection- the Chocolate Chip Zucchini Bread, also a new item.

The cookie ($1.75) was soft and intensely chocolate-y, perfect for getting my chocolate fix with a dose of healthy fats. The avocado doesn't contribute to the flavor profile, but as MealTicket pointed out, lends a buttery texture. Simply (healthy) food genius. The zucchini bread ($2.20) was just as good, with a nice crumb and a subtle spice. I usually don't like cinnamon in baked goods, but this was perfect. I also loved that each of their baked goods was the exact same portion-- the brownies and cakes are all made with a small square pan, allowing the same nutritional profile and preventing me from trying to point out the biggest item in the case (what?). 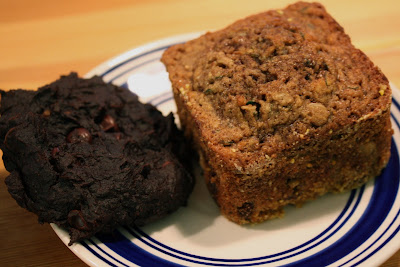 As we were packing up to leave, the owners quickly wrapped up a few extra baked good items, as they were closing up shop for the night and won't keep these items around for more than a day. I literally felt like I hit the jackpot, as we got to sample four additional items. The fig bar (made with homemade fig paste and no added sugar), the brownie (secret ingredient: sweet potato), the banana cookie (one of their most popular items), and the orange muffin (made with a yogurt-based frosting/glaze)-- how lucky were we?? My first thought was to taste test the items on my boyfriend, who has a notoriously picky palate. They all passed with flying colors, which further enforces my opinion that these desserts are not only made with whole, nutritious ingredients but they also taste amazing. 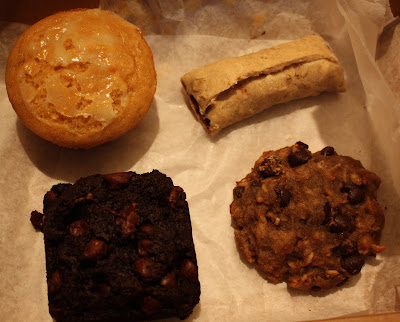 You might be tired of my ravings at this point but I have a few more details to share:
1) The MyFare online system allows you to track nutritional intake (a meal plan/delivery system seems to be in the works)
2) Tons of options for vegan and gluten free eating
3) The owners are so passionate, friendly, and outgoing
4) It's SO affordable, especially considering the high cost of some of the ingredients
5) They serve breakfast (oatmeal, breakfast sandwiches, yogurt, etc) 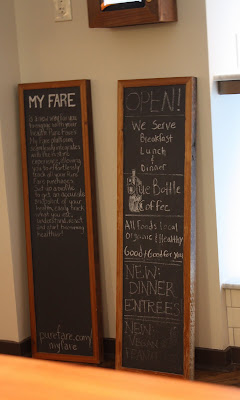 We told the owners we were ready to move in, and while that is clearly not a viable option, we will definitely be returning as often as possible-- it's good for a quick coffee, an afternoon snack, breakfast, dinner, you name it-- as well as trying to emulate some of their recipes at home. We want Pure Fare to become a Philadelphia institution, so (perhaps a selfish request) go check it out yourselves!