Another day, another Groupon. Our most recent deal-of-the-day purchase was for Manakeesh Cafe and Bakery, a West Philly Lebanese outpost that is relatively new. It's received some buzz around the online food-loving community, including a glowing review and accolade of "Best Baklava in the City" by our friends at 22nd and Philly. We love baklava, and we love to save a little dough, so as Groupon would say, the deal is on!

We headed out to cash in our coupon for a quick middle of the week dinner. In this weather, even the short hike to 45th and Walnut was almost unbearable (my Florida blood thins more every summer), but the bright atmosphere and blast of air conditioning welcomed us to the Middle Eastern oasis. 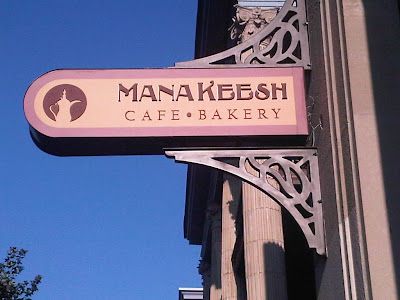 Upon entering, it's impossible to miss the gigantic display of desserts on and in the front counter. The cafe is also a bakery, offering an overwhelming quantity and variety of sweet treats- most of them foreign to us. Before we even started thinking about what to order for dinner, J started scheming about what to get for dessert. I had to force her to focus on the task at hand- ie which "Manakeesh" or flatbread sandwich/pizza to order. 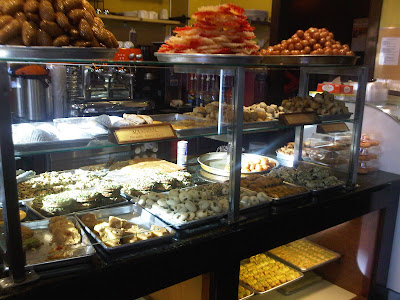 The range of sandwich toppings covers the savory- a thyme-based pesto like sauce is quite popular- cheese, veggies, and various meats, as well as sweet- Nutella and a yogurt & honey combo are both available. J went with the vegetarian "combo," a flatbread covered in the thyme pesto and olives on one side, and cheese on the other, with the addition of "veggies," a vague term which added $0.75 to the whopping base price of $3.85. Probably one of the best deals in the city, the enormous pita-like bread was folded in half to contain all of the inner goods. 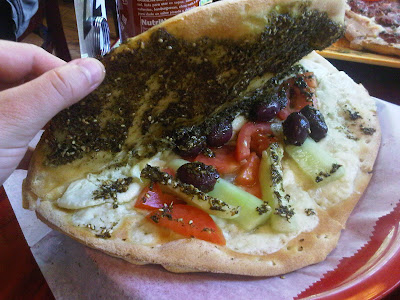 The veggies on the sandwich consisted of some chopped fresh cucumber and tomato, offering a tiny bit of respite from the saltiness of the other ingredients. Serious salt. I tried a few bites but I don't think I could have managed a whole one myself- while delicious flavor-wise, the salt was overwhelming. 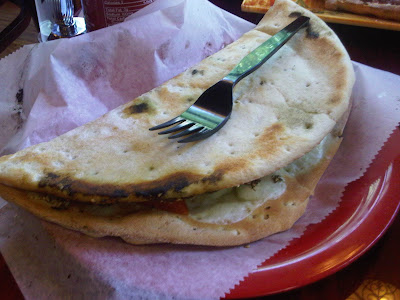 I went for a meatier option, choosing the Kafta flatbread, $5.50, again with the addition of the veggies. However, the veggies for the meat were different than those for the vegetarian options- or perhaps it's just random. The creator of my little pizza-like meal provided pickle slices and onion atop the flattened ground beef and lamb pieces. 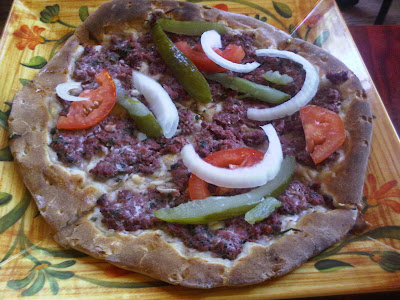 I would like to thank him for the tomatoes though- nice touch. Overall, I loved the combination- the thin bread gave enough chew and substance to hold up to the generous amount of meat, and allowed the spiced lamb to take center stage. If I could have had a little grilled bell pepper, I would have been even happier.

Thankfully, I got a small serving of veggies in the form of a side, the small Fattoush salad ($2.75). A little bowl of chopped lettuce, tomato, and cucumber was topped with crispy fried pita pieces and an oil-based vinaigrette that was bursting with the flavors of oregano and red wine vinegar. A large version of this salad and a simple cheese Manakeesh would be a perfectly satisfying meal for two. 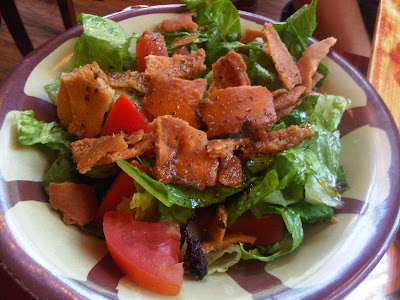 I'm presenting these dishes in a logical order, but to be honest, we were served our dessert selections first. We had a really difficult time picking them out at the counter, but our friendly server guided us through our options, and only kind of smirked at our fat kid tendencies.

We had to stare at our plates of cookies and pastries while waiting for our main courses. Particularly difficult to ignore was the Manakeesh "Power Bar," an amazing concoction of a graham cracker shortbread topped with walnuts and pistachios tossed in a simple syrup which holds everything together in a sticky shell. We picked off pieces of nuts while we waited, and then tackled the rest as soon as we were done with our entrees. 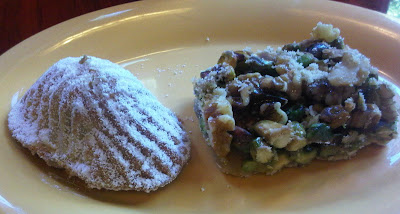 The portion of nuts alone easily justifies the price of this bar, and would have been enough dessert to satisfy my sweet tooth if it hadn't been faced with 45 other options. The second creation we tried was called a Ma'moul ($2.25). This was a soft, crumbly cookie stuffed with ground pistachio paste. Just a hint of sweetness complimented the butteriness of the shell and the rich flavor of the green nuts- I could eat this daily. 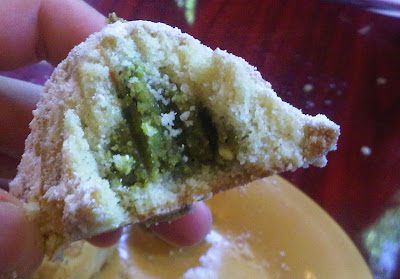 Our second plate of decadence included a variety of smaller cookies and pastries. We sampled two types of baklava- that rich, layered dessert combining ground nuts, flaky pastry and a sweet syrup. Manakeesh offers walnut, pistachio, and cashew, and we asked for the latter two. Three small flaky pieces arrived on our plate, so we weren't really sure which was which. What was overwhelmingly obvious upon first bite, however, was that it simply didn't matter- the flavor and texture of these little bites was out of this world. Dense, sweet, crunchy, yet soft- yes, this is hands down the best baklava we've experienced in any recent memory. Next time you have a spare $1.50, your best bet is this baklava. 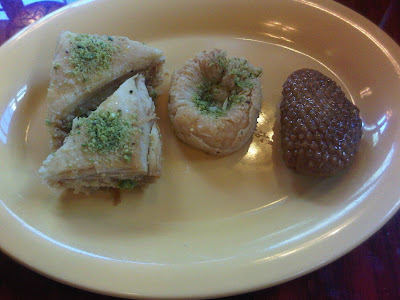 Our last, random pick was a piece of fried dough ($1). Several varieties of these little glazed-doughnut-like items are piled on top of the counter, making it near impossible to turn down. The outer shell of these little pinecone shaped doughballs is thicker than you might imagine, yielding to a crossaint-like interior. Sticky, soft, and sweet, with a hint of cardamom or cinnamon (something spicy), it was a sugary taste of the Middle East.

Overall, our meal at Manakeesh was a steal- in part because of the Groupon, but realistically would have been cheap eats regardless. From the salty, savory, meaty flatbreads to the trays and piles of sweet, homemade pastries, you can easily eat yourself sick for under $15. Not that we recommend that, but it wouldn't be difficult in a place like this. Bring your computer, enjoy the bright, clean little dining room, the breezy patio, or the plush couch and make yourself a little home in this cafe- trust us, you won't want to leave for awhile.