Almost every morning, I run the same route to my gym, allowing me a very good sense of these five blocks of the city (at least the way they are at 6:15 and 7:30AM). Every day, twice a day, I pass by Little Pete's- a little classic diner located in prime real estate, open 24 hours a day. Every day, I see the regulars drinking coffee at the counter, the big platters of eggs and pancakes, and the waitresses bustling around. Having grown up without a single diner in sight, I don't tend to gravitate towards them. However, the sights and smells and sounds surrounding the place intrigue me, so with a willing father in town, the three of us hit up the diner for a late breakfast. 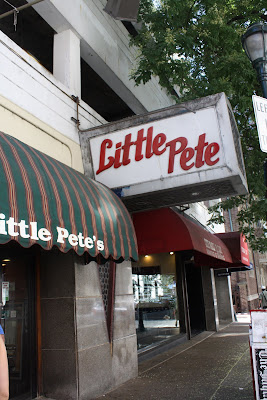 Everything about Little Pete's is authentic, almost transporting you to any other diner in small-town (or big-city) America. Interestingly enough (and perhaps this is common knowledge to others), most diners on the East Coast are owned and operated by Greek immigrants. My dad caught the owner outside on a break, and after chatting him up, asked how this cultural phenomena came to be. The answer apparently stems from a flood of immigration over the span of a couple generations, bringing in non-English speaking laborers who specifically sought out dishwashing jobs (always available, and no real communication needed). These jobs led to busboys and line cooks and waitresses, and eventually, the business of owning their own little pieces of the American dream. 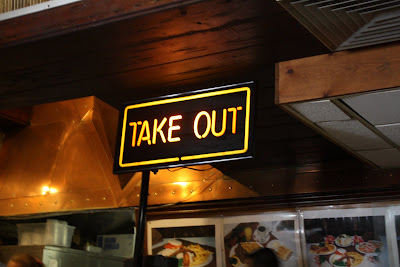 Our waitress was an older woman who looked like she'd been serving plates of comfort food for longer than I've been alive, but was efficient and friendly. Our dad ordered a simple feta and tomato omelette, sans the usual hash browns and toast that comes with it. At $7.95 for the entire meal, it's a little pricier than some of the other breakfast spots in the city, but with its convenient location and proximity to a million hotels, I don't blame them. 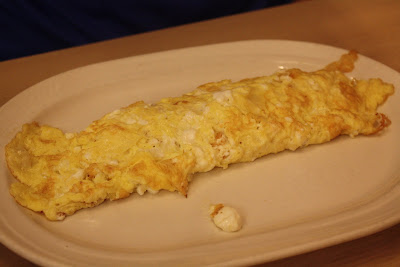 Unfortunately, the order got put in wrong, and no tomatoes existed within the roll of egg and cheese. Fortunately, it was delicious without it- just the right touch of butter, perfectly cooked without a hint of burnt spots.

I also had to get a big pile of eggs, but chose the Western omelette ($7.20). The filling consisted of huge chunks of softened peppers, onions, and mushrooms, and a few of these pieces lay scattered on top as well. 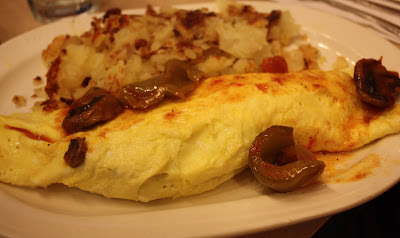 They added a bit of salt and substance to the fluffy eggs, although I'm used to the filling being more incorporated into the egg mix instead of surrounded by it-- it was almost as if the omelette had been pre-made and then veggies added as it was rolled up. Still, consumed together, it was a satisfying meal. The accompanying hash browns were half shreds, half cubes of potatoes and were a bit bland- but nothing a good dose of ketchup couldn't fix. 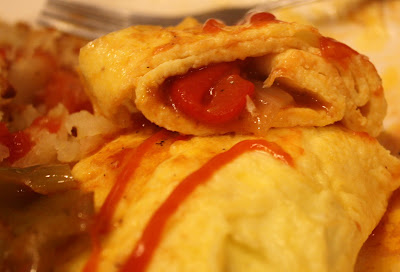 My meal also came with a side of toast, which our dad insisted be Jewish rye. Apparently it is non-Kosher (no pun intended) to order anything but at a diner. With the first bite I can see why- somehow, considering the combination of the way the bread is made, sliced, buttered, and toasted, I'm not sure I ever want to eat any other toast. Even with a lack of caraway seeds, the rye flavor was just prominent enough to remind me of a quality corned beef sandwich. 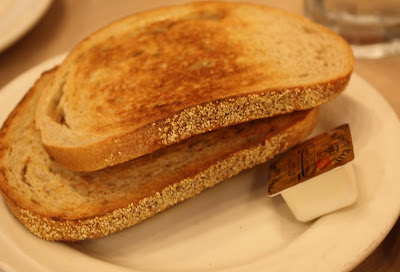 J had to mix things up, and ordered the "Hot Cakes" with a side of scrapple ($4.50 + $3.95). If there is one thing a diner should be able to make, it's pancakes, and Little Pete's didn't disappoint. These don't quite hold up to the nutritional stats of our homemade cakes, as they basically ooze butter onto your plate- and into your mouth as soon as you take a bite. But for a once-in-awhile breakfast treat, they are fluffy pancake delights. 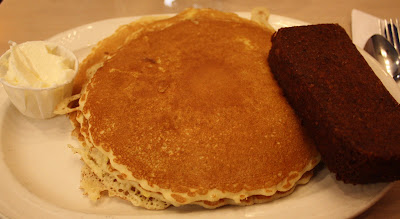 The scrapple was an attempt at adventure, as J had never tried it before. I don't want to get into the politics of scrapple (how it is made), but suffice it to say you just don't want to know. But, as a Philadelphia breakfast staple, you at least have to try it once. The scrapple at Little Pete's is heavy on the breadcrumb/cornmeal filling, but tastes essentially like a soft, crumbly brick of sausage, with a crispy fried exterior. Very similar flavors to this other "scrap meat product" item, with a bit of spice. 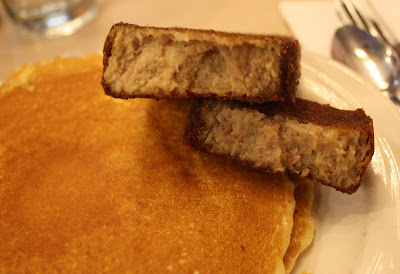 The portions here are pretty large (as I almost expect at a place like this), so we ended up leaving a fair portion behind. Nonetheless, what we did consume was just what we had expected when we made our breakfast choices- both in choosing to try Little Pete's and in choosing what to eat.

It seems odd to me to heap praise on a restaurant that is an island of artery-clogging, inexpensive, basic foods in a sea of gourmet, fresh/local/organic, upscale restaurants, but sometimes, all you want is a greasy breakfast. Thankfully, Little Pete's has you covered.