During my last visit to Boston, my boyfriend and I had dinner at a solid tapas place right down the street from his apartment. Taberna de Haro specializes in Spanish tapas and wines and has a great outdoor seating area perfect for a Boston summer evening. Their menu is extensive and seems quite authentic- we've always been pleased with our choices. On this particular visit, one dish stood out to me- the Pisto, described as "slow-braised eggplant, peppers, onions, and tomatoes, and a poached egg." Served in a piping hot cast-iron skillet with a few slices of bread, the dish was outrageously flavorful and just had that rich, hearty, cooked-for-forever essence that is soul satisfying no matter the season. Though I didn't think to snap a picture, another out-of-town blogger documented the dish. 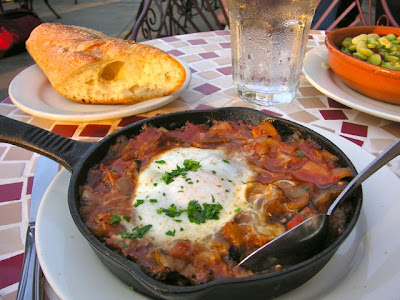 After a year and a half of blogging my meals, my memory for great dishes has been well honed. When I returned home, I spent some time reading about pisto (otherwise known as Pisto Manchego, as it originated in the La Mancha region of Spain) and Googling recipes. As it turned out, we received an eggplant in our CSA, so I quickly claimed it to make my own version of the dish at home.

Halve and deseed peppers. Halve or quarter potatoes, depending on size. Quarter zucchini. Cut onions into quarters but keep the skin intact. Toss everything with olive oil and spread evenly over a pan.

Broil the veggies in the oven on high for 15 to 20 minutes. Keep an eye on the level of char- I pulled the peppers out early since they're a bit more fragile than the others. The time in the oven adds an important depth of flavor- that fire roasted smokiness- that could also be attained with a grill. 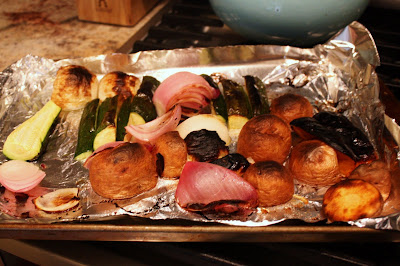 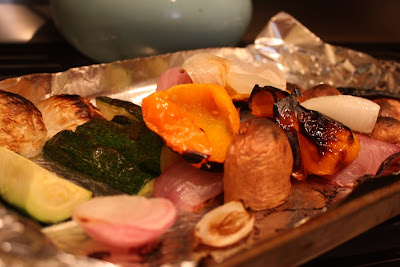 While these are going in the oven, mince garlic and peel and chop the eggplant into 3/4 inch cubes. Heat a Dutch oven over medium heat with a few tablespoons of olive oil. Add the garlic, saute 30 seconds. Add the eggplant, stir frequently and cook for 15 minutes, adding a few pinches of salt about halfway through. The eggplant will brown a bit and get some texture- a bit of crispiness. 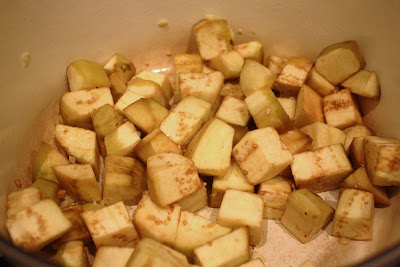 After the oven items are "done" (the potatoes and onions might not be cooked through- that's fine!), let them cool for a few minutes and then peel off any majorly charred areas- this will easily flake off of the peppers; the outer skin of the onion should come right off as well. Don't stress about this too much though- I left a solid amount of char on the peppers for flavor. Roughly chop everything into bite-sized chunks and toss everything into the pot with the eggplant. 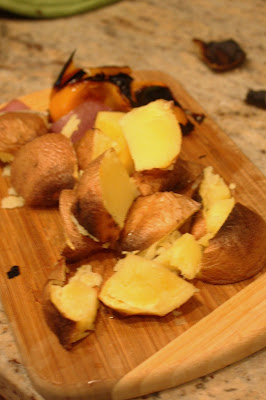 Give everything a good stir and let things cook for a few minutes longer on medium heat. 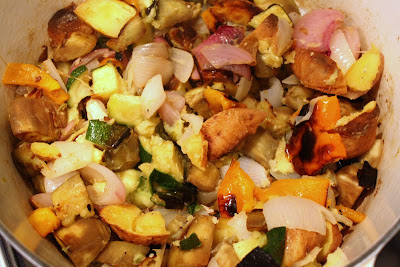 Add the can of diced tomatoes including the liquid to the pot. Mix it in, add salt and pepper to taste (the tomatoes should have a fair bit of salt so I didn't add much), cover the pot, and turn the heat down to low. 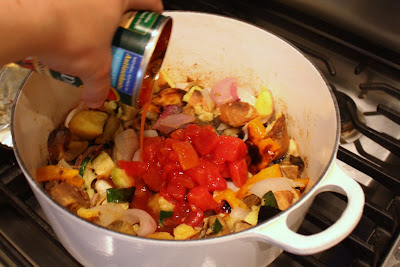 At this point the vegetables are softening and melding together, releasing liquid and becoming a unified ratatouille. This step of the cooking can go on indefinitely but I would recommend at least 25 minutes. Stir occasionally. 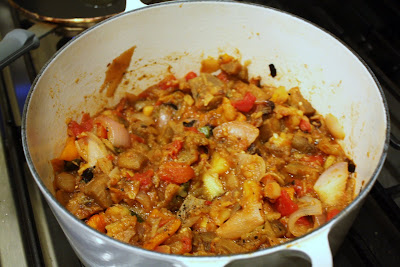 At the very end of the cook time, heat up a small frying pan with a bit of oil. Plate the pisto using a shallow bowl. 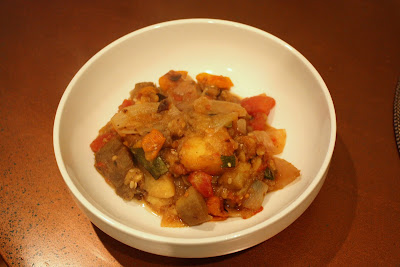 Fry one egg per serving over easy, keeping the yolk as runny as possible. You can also poach the eggs, though this requires a bit more work. Top the vegetables with an egg and immediately begin cutting it into the dish until it is completely mixed in. The egg will finish cooking from the heat of the eggplant. This step can be done table-side- although the egg adds a very necessary deliciousness (and helps makes it a "complete" meal) the dish is a little prettier before the egg is mixed in. Serve with crusty bread. 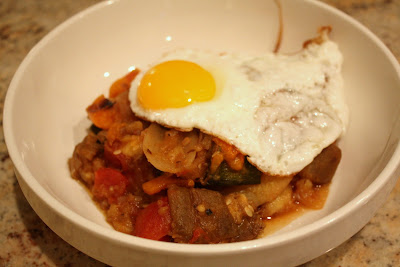 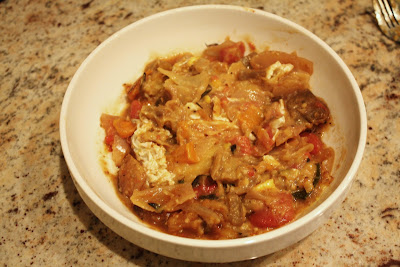 I was a little nervous that I wasn't going to enjoy this as much as I did at Taberna de Haro, but even though my rendition was definitely different, it was still full of flavor and just as satisfying. This is a great recipe to modify by adding or subtracting veggies depending on what you have on hand- would be great with corn, fresh or sun-dried tomatoes, yellow squash, etc. The eggplant acts as a sort of neutral "glue" that acts as a base for the rest of the more flavorful slow-cooked veggies... a great way to use an eggplant if you're not that into eggplant. Overall a delicious vegetarian meal or side dish.
Posted by A and J at 1:47 PM