A good friend of ours recently moved to Conshohocken from Center City.  To us city-dwellers, this may as well be the middle of PA.  However, she quickly conned us into coming to visit with the promise of terrific Mexican food.  In her quest to find the best that her new locale had to offer, she discovered El Limon, right on the main drag of Fayette Street. 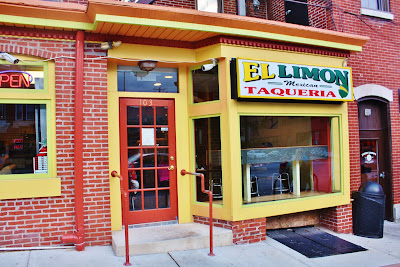 Although Taqueria Veracruzana has been on "The List" for years, we've never made it to South Philly to try some of the more well-known Mexican places.  El Limon reintroduced us to the world of tacos and tortas.  The menu has all the expected dishes- burritos, tacos, fajitas, enchiladas, etc.  My favorite?  The "ships and salsa." 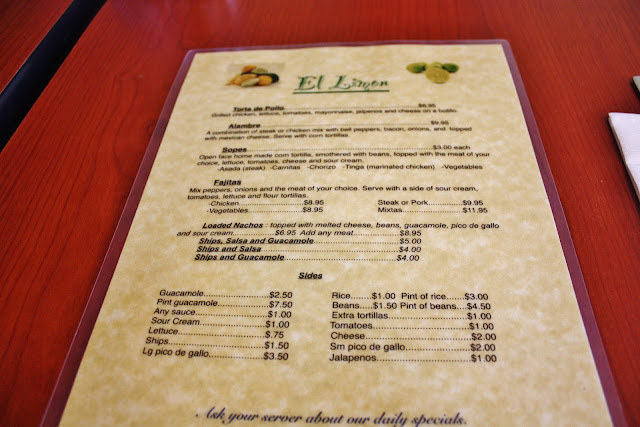 Of course we had to place an order for the "ships," salsa and guac ($5), a great starter for our group of four.  A plate full of super crunchy, deep-fried tortilla wedges had a thick, grainy texture that only homemade ships chips have.  The guac was a great mixture of creamy and chunky, with a standard flavor profile- garlic, cilantro, and lime.  The salsa was more memorable- tomatoes, onion, and jalapeno diced fine without becoming mushy in the least- a sure sign of a freshly made salsa.  Plenty of citrus and a little spice and perfect for scooping. 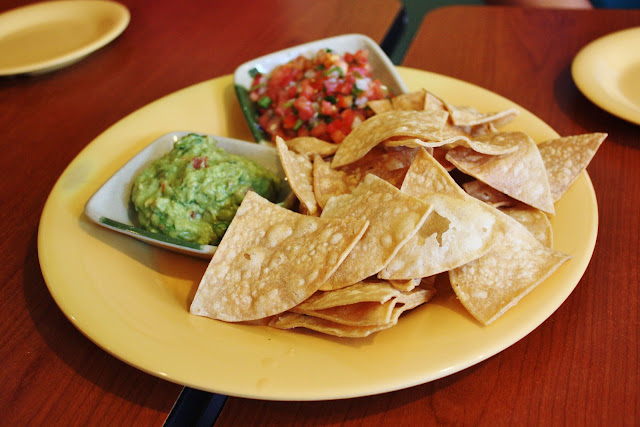 Our friend vouched for the tacos, so A ordered one of the chicken variety (all tacos $2.50, add $0.25 for a "supremed" version) as well as a steak sope.  Unsupremed tacos come in double-layered corn tortilla topped simply with diced white onion and cilantro.  The pile of meat was generous without overfilling the folded finished product.  Big chunks of white meat chicken were marinated in a chile-based sauce that was sweet and spicy, but a little one-note.


One of our friends also went the one sope, one taco route- this time a taco supreme.  An extra quarter gets you lettuce, tomatoes, cheese, and sour cream, which I would recommend to build a few layers into the final composition of the taco.  Actually, I'd say just get the sopes ($3 each).  Instead of a soft, foldable taco, the tortillas are deep fried to make a crispy base.  The giant round chip  is smeared with refried beans, piled with meat of your choice, and then topped with the same taco supreme toppings.  A's steak was well-seasoned, but played less of a starring role due to the other pieces of the sope puzzle.  It was actually easier to eat than I thought it would be- use of a fork and a knife is advised.

Our Conshy friend took her own advice, ordering three tacos as her dinner- steak, chicken, and chorizo.  For a mere $7.50, you can get a wide variety of flavors- mixing and matching is a must.  Fish tacos were also on the specials menu that evening- we'll have to make a return trip to try those. 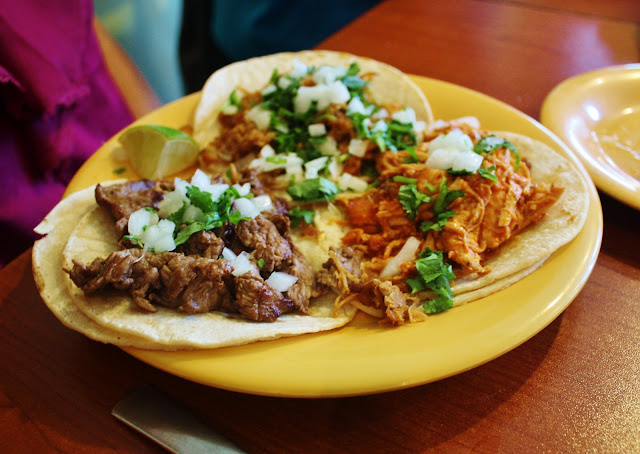 I ignored the taco advice (mostly because I knew A would share) and opted instead to try a torta- essentially a giant Mexican sandwich.  The Torta de Milanesa ($6.95) is made on a soft, untoasted bun and consists of breaded and fried steak, huge pieces of avocado, lettuce, tomato, mayo, a few pickled jalapenos and "Mexican cheese." 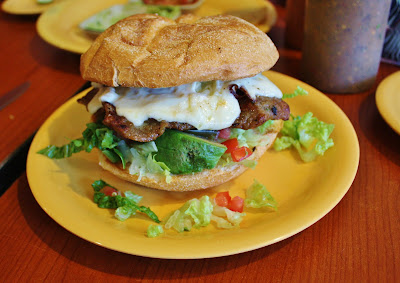 I'm not entirely sure of the specific type of cheese that they used, but it was extremely soft, giving almost a grilled cheese element to the torta- but without any of the crispy bread.  Instead, the bun squished down considerably, compressing the meat and cheese into somewhat of a gooey mess.  The meat was a little on the tough side, which I expected, but not to the extent that it inhibited the eating process.  I will say that the veggies on the bottom did a good job of spilling out, which again, I expected considering it was like a mini salad on my sandwich.  The verdict?  Not my favorite sandwich. 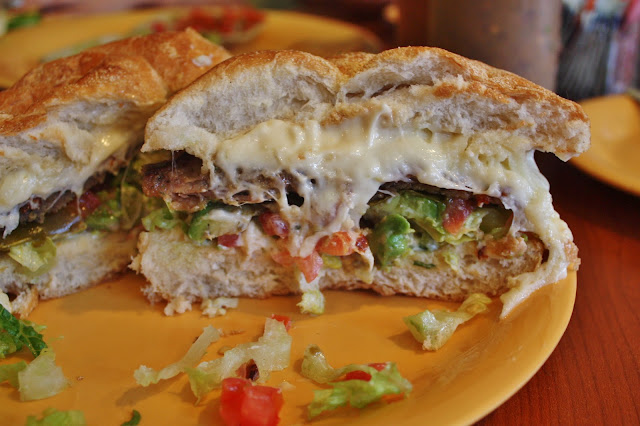 A & I also split a salad- the ensalada de tortilla ($5.95).  True to its name, the pile of mixed greens was almost completely covered with fried strips of corn tortilla, often in layers of three or four.    Red and green peppers and avocado complete the mix, and the whole thing was well-coated with a drizzle of "delicious chipotle dressing" (their description).  The mayo-based sauce certainly had a nice chipotle kick to it, but I felt that it was a bit too heavy, masking the freshness of the veggies and overpowering the namesake ingredient. 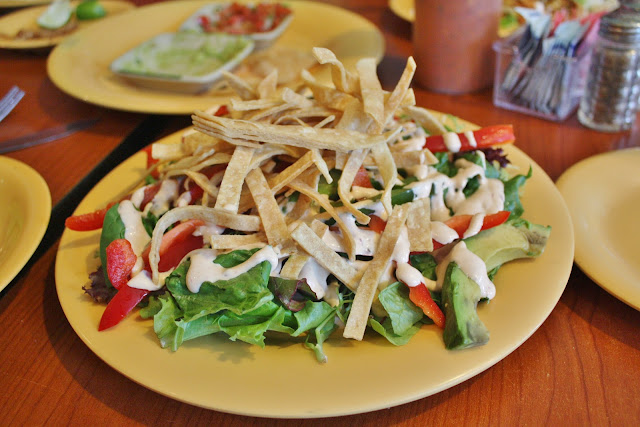 It was a fun adventure to make an evening date out in "the 'burbs," and El Limon lived up to its hype, at least in the taco department.  Right up the hill from a SEPTA station on the Norristown line, it's very accessible.  Our view of Conshohocken definitely changed- it's actually a super cute area with plenty of shops, restaurants, and cafes- just another charming Philly neighborhood.