Although we've never written about it, Good Dog is one of our go-to neighborhood staples.  With their multi-level dining space, we can always seem to find a place to sit.  There is usually a game on TV, or if you're more of a player than a watcher, there's the pool/dart/arcade room upstairs.  The hipster-y vibe is pretty standard for Philly- it's a common place for us to take visiting friends.  Of course, the most important part- the food- has never let us down.  With plenty of sandwiches and salads, fun riffs on bar food, and of course, The Burger... you really can't go wrong. 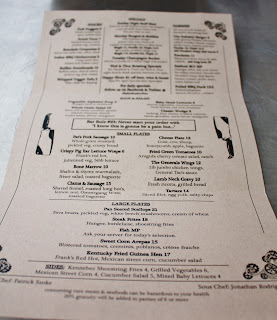 Ok, enough about Good Dog. They've been around for awhile and everybody knows about them.  However, the good people who own Good Dog recently expanded into a new-to-me neighborhood with The Industry, one of the newest gastropubs on the Philly food scene.

I forgot to snap any pics of the space- the inside of the large corner building consists of one airy, open room (the antithesis to Good Dog), with the addition of a row of tables lining the sidewalk outside.  The menu is also quite different from its predecessor- plenty of influences (Asian, Mexican, Indian, etc) mix to create a selection of intriguing options.
Though A wasn't dining with me, I had a good replacement as my good friend loves to share.  We started out with something off the "snacks" part of the menu- our waiter described these dishes as basically just a few bites- smaller than a "small plate."  We agreed on the pork nuggets ($6) which are pretty self-explanatory- fried chunks of meat that resemble chicken nuggets.  However, instead of a regular chunk of meat, The Industry uses testa- a sort of head-cheese made of various pork scraps mixed with a gelatinous broth, the result of cooking down pig's head/feet with a bunch of herbs and spices.  A super crispy panko crust offset any potential Jello-like textures, and the creamy and spicy chili pepper aioli was a great flavor match. 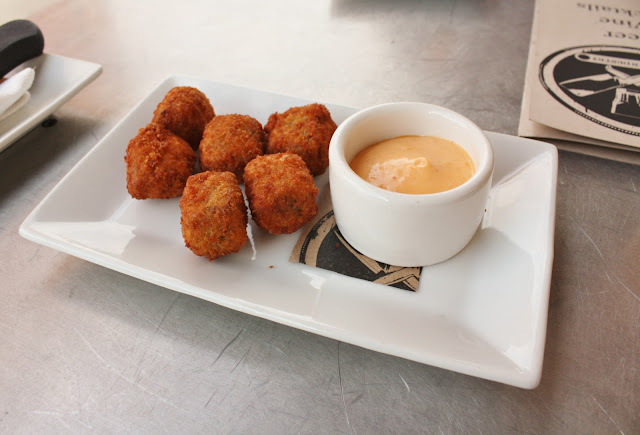 We also split two of the "small plates" which were much more substantial- a couple of these could easily act as a full meal.  My favorite dish of the evening was the lamb neck gravy ($10)- a super savory stew of lamb meat in a rich tomato based sauce. A hefty dollop of ricotta cheese added some not-too-heavy creaminess while thin pieces of crunchy grilled baguette served as a gravy transporter- though the big rounded soup spoons worked well too.  Overall just a really well-balanced, well-executed, and interesting dish. 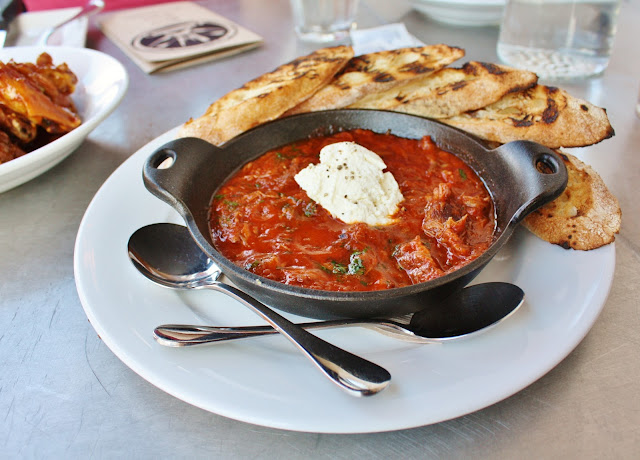 We were eyeing the pork sausage (served with whole grain mustard and pickled vegetables) but opted for The Generals Wings ($12) instead as we'd already eaten a pork dish.  Wings are one of the only recognizable "bar foods" on the menu; however, the kitchen mixes things up a bit by coating their version with a thick and sweet glaze tasting mostly of candied oranges.  The wings are unbreaded, unlike their namesake General Tso's chicken.  While I admit to enjoying wings in any form, these were too one-note for me to really love.  A little more spice please! 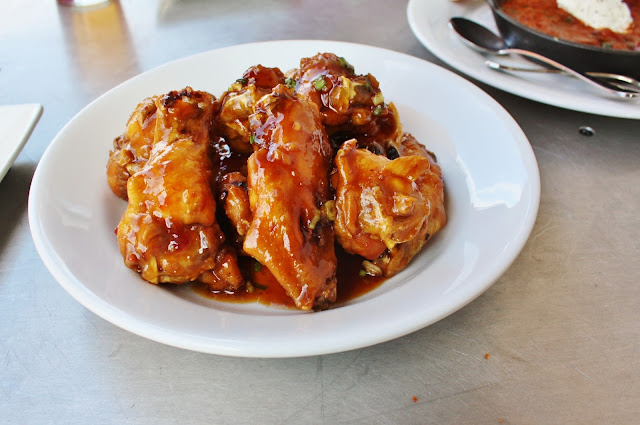 For my main course, I strayed from the meat-fest that made up the first couple of courses and ordered the sweet corn arepas ($15). This dish showcased the international influence of the menu, as arepas are native to Colombia and Venezuela.  Essentially a baked cornmeal cake, the arepa itself had a dense polenta-like texture and flavor. Relatively plain on their own, the cakes were jazzed up with a roasted tomato and poblano sauce filled out with plenty of quartered crimini mushrooms.  Though entirely different in flavor profile, the sauce had the same perfect balance that I saw in the lamb gravy.  Spicy, sweet, a little smoky- if you had told me there was meat in here, I would have believed you. Hearty without being heavy. 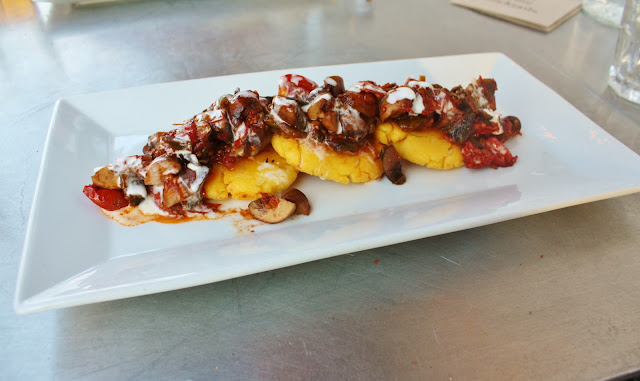 Our waiter highly recommended the Kentucky Fried Guinea Hen ($17), another dish that demonstrates some super crispy frying skills.  Although the guinea hen is slightly smaller than a chicken, this plate serves up a leg and attached breast which ends up being a decent piece of meat.  A crunchy cucumber salad and Mexican-street-vendor style corn on the cob (smothered in butter, parmesan, lime, and a bit of mayo) gives a summer BBQ feel to the dish.  The one complaint was the use of Frank's Red Hot as a dipping sauce- Frank's is fantastic, but why not make a hot sauce in house? 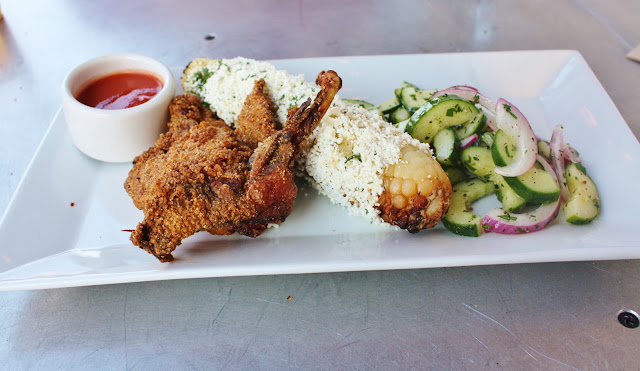 We forged on, taking a look at the dessert menu.  The kitchen keeps it pretty minimal- cheese plate, doughnuts, a heavier chocolate item, and a lighter fruit shortcake.  We'd been discussing Federal Donuts, so I think fried dough was on the brain ($6).  These guys were a little dense- with a few of them actually having uncooked middles- and were coated in plenty of cinnamon and sugar.  The little pot of homemade blackberry preserves was the real winner- sweet and syrupy while maintaining plenty of tartness and big chunks of fruit. No FedNuts, but a passable dessert.  A little vanilla ice cream and a scoop of those preserves would have made me quite happy as well. 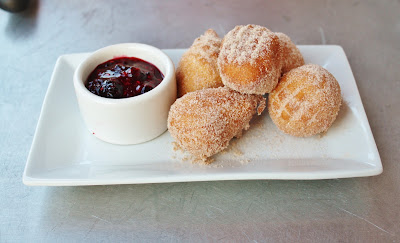 Although The Industry is in a slightly strange neighborhood (though only a few blocks from recognizable areas), it still represents a great addition to the gastropub scene.  Like the location, the menu provides just the right amount of adventure without getting inaccessible.  It's not often you can try entirely new dishes (testa? lamb neck gravy?) at a bar!