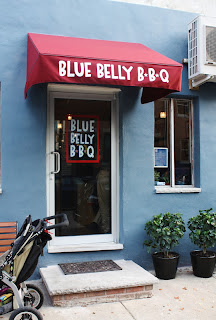 New restaurant? Serves BBQ? Little sister to one of our favorites?  We're there.  Last Thursday, Gene Giuffi & co opened their tiny restaurant serving "Barbecue without Borders" and we were the last diners in the door for dinner (it closes at 7 PM).  The space only holds three or four small tables as well as a small counter overlooking the action in the kitchen.  While we had to wait a few minutes for a table to open up, we'd also half expected to encounter a long line or to be turned away, so it was no big deal.
We settled in and laughed at some of the decor- hand drawings of cuts of meat (including the hot dog) and some cute "words to live by" signs.  Solid wood tables and benches and colorful chalkboard menus fit in with the casual down-home vibe.

Unfortunately, since we were sliding in at the end of the first day of service, the kitchen was already cleaned out of a few things, including the special (pork ribs) and two of the sides- the bacon onion corn cakes and braised greens.  Sad, because I would have loved to experience all of the above!  Thankfully there were plenty of other options available and we had no problem placing our order (from Gene himself!).  While we waited for the food- and suffered through delicious meat smells that caused exponential increases in hunger- we did a little sauce tasting. Housemade sauces include a hot, a vinegar, a sweet, and a mustard dip.  The mustard dip was my favorite- the others were a bit on the thin side and the sweet far too sweet.

As the remaining patrons trickled out, we were served our food on (overly) enormous trays covered in personalized brown paper.  I went with a sandwich- the lamb barbacoa ($13) which is served with coleslaw and fries.  A small pile of pickles and pickled okra had a great crunch and perfect vinegar and garlic flavor.  The slaw was also a hit, made with lightly pickled purple cabbage that maintained a great texture and avoided any heavy mayo based sauces.  Simple and refreshing.  The sandwich itself is made on a long piece of baguette, lightly toasted to provide some structure.  Huge chunks of tender barbecued lamb are coated with a whisper of sweet and spicy sauce made with chili peppers and vinegar.  Crispy fried tortilla matchsticks and a few pieces of raw radish provided plenty of contrasting textures.  The combination of ingredients and cooking techniques played well with the naturally gamey meat. 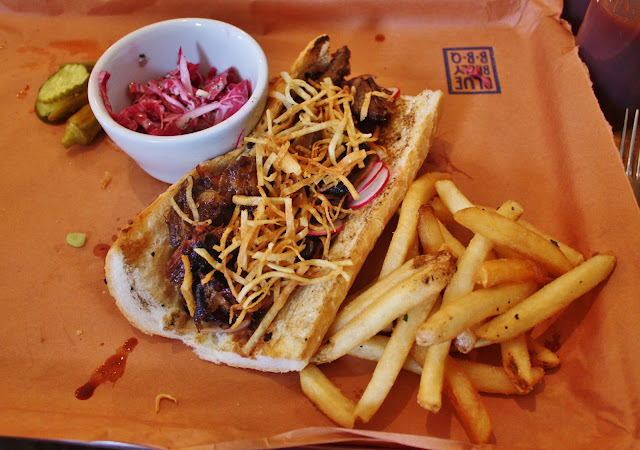 Our dad was in town (another great reason to check out a new place!) and his order was no surprise- the sausage trio ($15).  Off the smoked meats menu, the plate tray comes with three sides, pickles, and a hunk of bread.  The sausages of the day included an andouille, cheddar and bacon, and sage.  I snagged a piece of the andouille- piping hot, full of spices, and dripping with fat in its tastiest form.  The cheddar one was oozing melted cheese- no complaints from the sausage connoisseur.  Mac n' cheese is served in a loose pool (no gooey clumps if that's your style), coated in breadcrumbs and adorned with a few pieces of pork rinds- a fun touch. 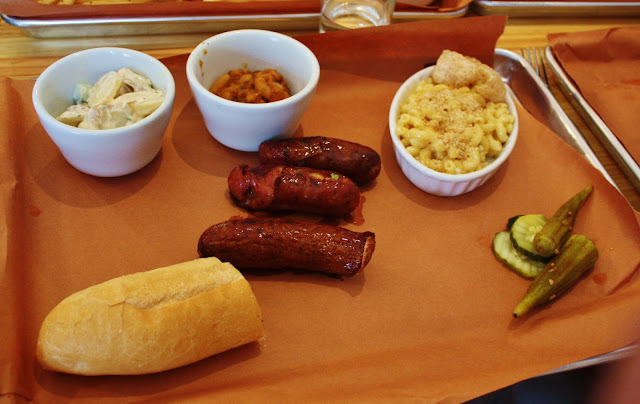 A's fiance rounded out our foursome, his order being no surprise either (men are so predictable).  The pulled pork sandwich ($12) is served on a squishy bun with a ridiculous meat to bread ratio.  Pork rinds play a supporting role in this sandwich as well, while a tuft of pickled fennel balanced the salty meat.  The pork wasn't a standard pulled pork- or if it was, it was a whole pile of pieces from the edge, with that slightly chewy coating of sauce and spices.  It also had a hint of an unidentifiable spice- slightly sweet, perhaps cinnamon?  Regardless, this was not a standard pulled pork sandwich- and we always appreciate a break from the norm. 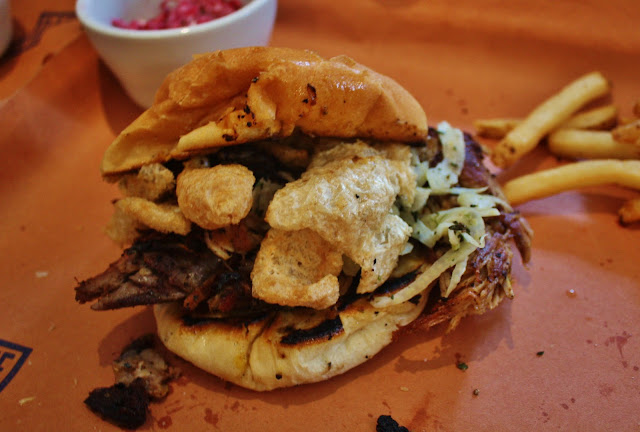 A balanced our table by ordering a smoked meat- a whole chicken leg ($12). All dark meat- a drumstick and a thigh- was coated in almost charred crispy skin, absorbing lots of smoky BBQ flavor.  Since it is a smaller portion, the meat itself has no chance to dry out.  Apparently it pairs well with the mustard dip (A had a sharing issue that night). 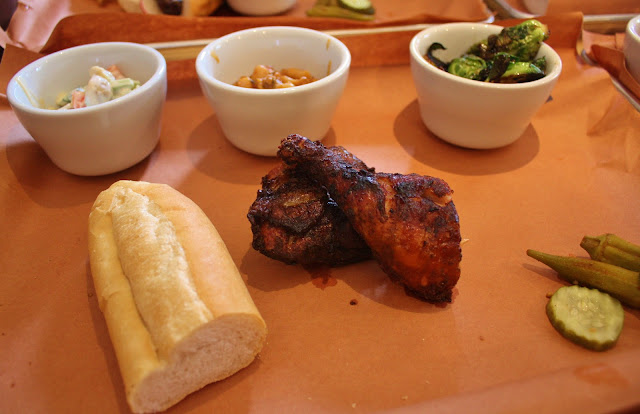 She also ordered the remaining sides, starting with the fingerling potato salad.  Tiny potatoes are mixed with fresh cucumbers, red peppers, and a mayo based sauce.  The freshness of the crunchy veggies and the tender potatoes balanced the heavier sauce- we'd love to recreate this at home.  Baked beans were too salty, probably because they were made with 50% beans and 50% meat. The bits of braised meat were too overpowering- the white beans didn't stand a chance.

My favorite side was the brussels sprouts- lightly charred, salty, with a bit of crunch maintained in the center. I guess I'm predictable too.

I do think there are some kinks to be worked out (stale pork rinds, oversalted beans, slightly small portions on the sides, closing at 7??) but considering it was opening day, they get free passes and then some.  I love that the concept doesn't restrict the menu to a specific region or cooking technique, allowing freedom to experiment and offer the best of every BBQ genre.  We're so happy to see another solid BBQ option in the city!