After missing last month's Burger Club meeting at Catahoula, we were looking forward to the July edition.  Instead of heading to another local restaurant, the head of the Club decided we would get out there and make our own burgers!  In the weeks leading up to the event, there was lots of online chatter about side dishes, burger toppings, and the main event itself: the beef!  We decided to pitch in with a classic summer side: cucumber salad.  We were originally inspired from our (Burger Club!) experience at Frankford Hall, where they serve a delicious German-esque variation of the dish. 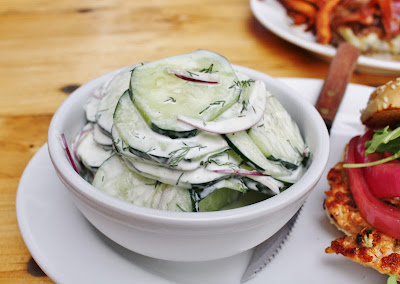 While home in Gainesville this summer, we made our own  How to Cook Everything's version of the simple salad.  It's- not surprisingly- incredibly easy, although you will need about an hour from start to finish.  I've made it a few times since, and thought it would be a good, lighter addition to the Burger Club fare.  J picked up cucumbers at the Rittenhouse farmer's market, and most everything else we already had on hand.

Cucumber and Dill Salad (tweaked from a mighty fine cookbook)

Prepping the main ingredient takes the most amount of hands on time-- you'll need to wash and peel the cucumbers before slicing them in half longwise.  Use a large metal spoon to scrape the seeds out (trash 'em).  A firm but gentle scrape is best-- you want to get all of the seeds out but keep as much of the regular flesh as possible. 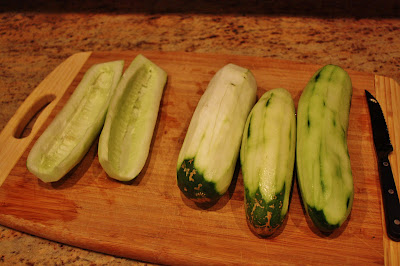 Slice the cucumber halves to desired thinness-- I cut about 1/4" slices.  Combine with the sliced red onion and toss well with the salt.  It does seem like a lot of salt, but it's necessary in order to reduce water content and remove some of the bitter flavors from both vegetables.  The cookbook had a great tip, which I'll share with you-- place the salted cucumbers in a colander and place a large plastic bag filled with ice over the top.  This acts as a super cheap, disposable weight to force some extra moisture out- as well as helping to keep things cool.  You'll want to drain this over a sink or bowl for about thirty minutes to an hour.  You can definitely go longer, but move the cukes to the refrigerator if it will be more than one hour. 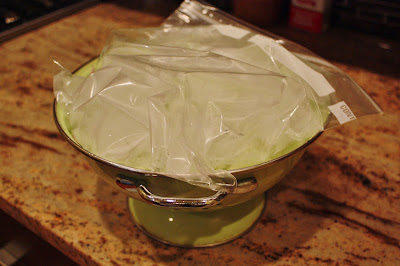 Once you're ready to serve, transfer the vegetables to your serving bowl (make sure not to transfer any leftover moisture from the colander), add the rest of the ingredients, and give it all a good stir.  You could also add some chopped garlic or a splash of vinegar if either are up your alley, but it's surprisingly flavorful as is. 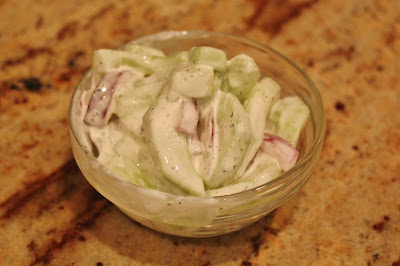 Similar to the cucumber and zucchini salad we recently made, it's light and refreshing.  Paired with a burger and some potato salad, you've got a plate of summer I could never refuse!

We were lucky to have delicious versions of both at the Burger Club barbecue.  Our "Burger Master" paired up with Philly Cow Share to source our beef locally.  If you haven't heard of Philly Cow Share and you've found yourself with a fair amount of freezer space, listen up!  If you also often head to the farmer's market or Whole Foods to buy a grass-fed, local steak or some ground beef, you could save yourself a fair amount of money and hassle by purchasing a "CowShare."  Essentially, the system is made to serve individuals and families, offering the meat of 1/8, 1/4, 1/2 and full cows (fully butchered and packaged, of course).  Their website even shows you how much space in your freezer it will take!

An excellent resource for a city of foodies, the opportunity to sample the meat has me interested in acquiring a chest freezer.  The burgers were made by adding a top-secret mix of spices and condiments to the fresh ground beef- we know it included Italian breadcrumbs, Worcestershire, and dried ranch seasoning, but with multiple cooks in the kitchen, nobody can really know for sure (hence, the top secret status).  Regardless, the meat would have been more than good on its own- producing a soft, almost fluffy textured patty with an intense flavor and just the right fat content (I need someone to measure that, stat). 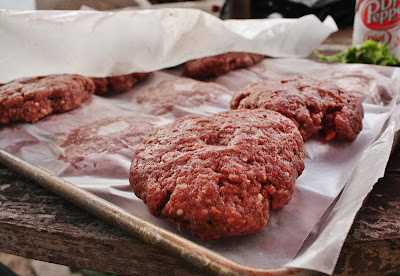 With a slice or two of blue cheese, fresh tomato and romaine on a potato bun, it made one heck of a burger.  Too bad we weren't ranking them this month! 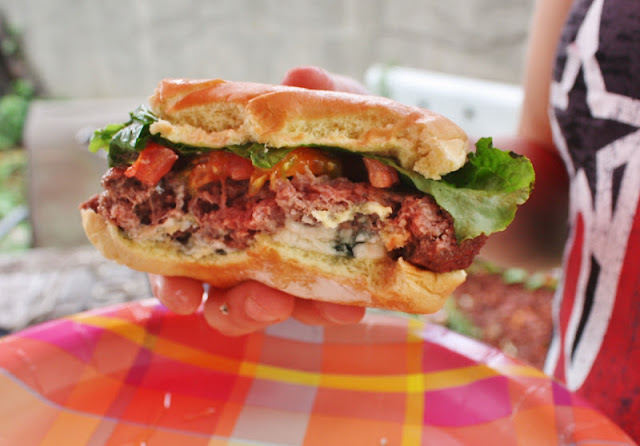