We've been wanting to get to Memphis Taproom for quite a long time.  But.. it's in Kensington. That Kensington.  However, we just heard too many good things about the food (they're famous for the fried pickles...) to put it off any longer.  We invited our good friend to join us for dinner, and coincidentally he has a car... the seemingly safest way to get into the area. 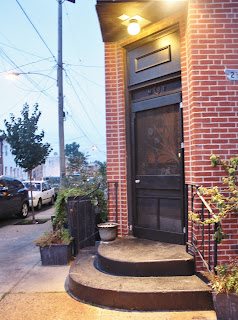 I'm a little embarrassed to admit that I hesitated for so long, because the neighborhood was perfectly nice.  Seriously, I would live there.  We got a great parking spot half a block away and popped into what seems to play the role of "neighborhood bar" quite seriously- a casual but inviting brick building on the corner of Cumberland Street and Memphis Street (hence the name).  The bar was packed, but we squeezed through the narrow space to snag a table in the back dining room.

The menu reflects the general trend of gastropubs- an emphasis on apps and sandwiches. Wings are a standard order for our friend; Memphis Taproom's version are spiced up  with a "pilsner brine" (10 for $9).  The wings themselves were on the smaller side, but with plenty of juicy meat and a thin crunchy breading.  Although these are advertised as "hot wings" on the menu, they were anything but spicy, with more of a sweet glazed sauce.  A tangy vinegar element paired well with the cool blue cheese dressing. 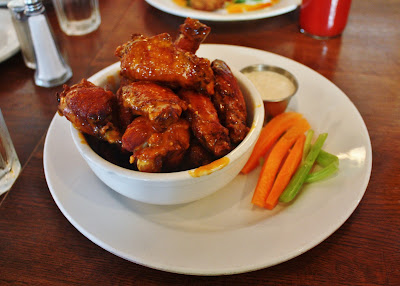 As with most of Philly's hipster-y bars, there are plenty of options for vegetarians and vegans.  The Old Bay Jackfruit Cakes ($9) were intriguing- we're always up for ordering new-to-us fruits and veggies.  A jackfruit is like a fleshy, starchy melon that apparently tastes like an unripened plantain.  There wasn't much in the way of typical fruit flavors in the fried cakes, with more of a savory "stuffing" taste and texture. I thought I recognized a few chunks of artichoke heart?  Regardless, pairing them with a mango and pineapple salsa salad seemed like a miss.  The separate components were fine, but together? No thanks. 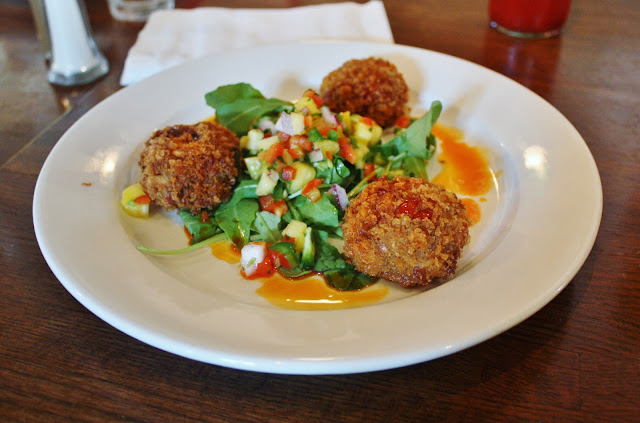 Of course we couldn't conclude the first round of dishes without trying the fried pickles.  A bowl full of dill pickle spears are coated in a thick layer of  beer batter and deep fried to a crispy perfection.  The batter is like every fried carnival food mixed into one- one part corndog, one part funnel cake, one part savory cake doughnut.  The high heat makes the spears of cuke seem extra salty and juicy- thankfully the batter soaks up anything that tries to escape.

As a warning, the pickles also hold an extreme amount of heat, so I cut mine into pieces to allow them to cool down a bit.  Every single table around us ordered the dish, reflecting its popularity.  In fact, one couple came in and ordered TWO bowls of fried pickles.  Why? "I don't like to share," explained the female.  Yeah. Now we get it.

The entree list is short and sweet, but one in particular sounded terrific- the chicken fried chicken ($15).  This was really an absurd amount of food for only fifteen bucks.  Three enormous pieces of chicken breast are fried in a super crispy, cereal-like coating. The meat was tender and a tad salty- possibly brined?  Underneath the chicken tenders I found three sides and a generous spread of a habanero mustard sauce that paired well with each of the them as well as with the chicken.  Sauteed rainbow chard was a bit of a surprise as a green- it's definitely on the heartier side, complete with lots of crunchy stems. 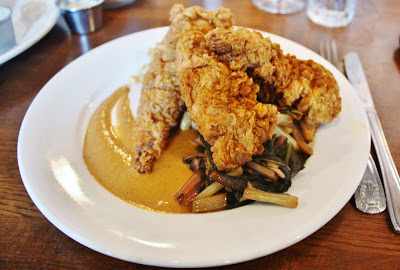 My favorite side was the hunk of sweet, cakey cornbread.  Unfortunately there were no corn kernels within the bread, but each forkful broke off crumb-free and was great for mopping up all the extra little bits.  A macaroni salad was more like a loose mac n' cheese mixed with mayo and breadcrumbs.  Well-seasoned, this was great as cold leftovers the following day. 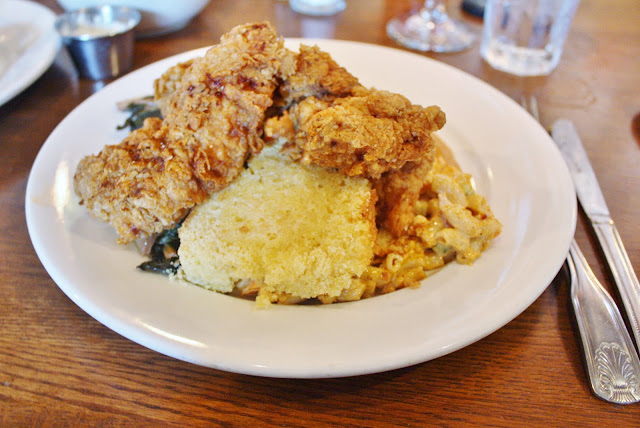 I had a hard time picking between the chicken and the slow roast pork sandwich ($9), so I connived my friend into ordering it so I could steal bites (a tactic I use often when dining with friends).  A thick layer of slow roasted pork shoulder is smothered with melted provolone cheese spread over the edges of a soft potato bun. A tuft of fresh spinach provided some freshness in the midst of the meat and cheese, possibly countered by a smear of garlic mayo.  Everything melded together to make one of the most soul-warming sandwiches I've had in some time-- happiness on a potato bun.  Sandwiches come with a large portion of crispy fries, salty and addicting.  Even when I was stuffed to the brim I couldn't stop myself from snagging a few extra. 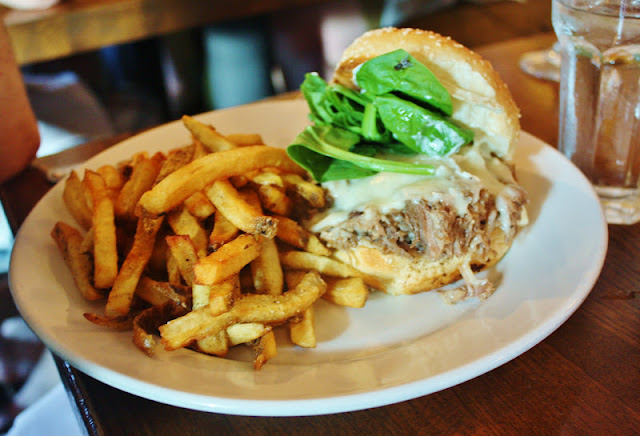 A ordered another sandwich, the kielbasy grinder ($9).  She easily swapped out the fries for a basic salad complete with shredded carrot, cucumbers, and tomatoes.  Unfortunately, the lettuce hadn't been properly dried, making it a bit soggy and preventing proper dressing adherence.  Split spicy kielbasy are grilled to a snappy crisp and coated in sauerkraut, sharp white cheddar cheese, and a potent beer mustard. 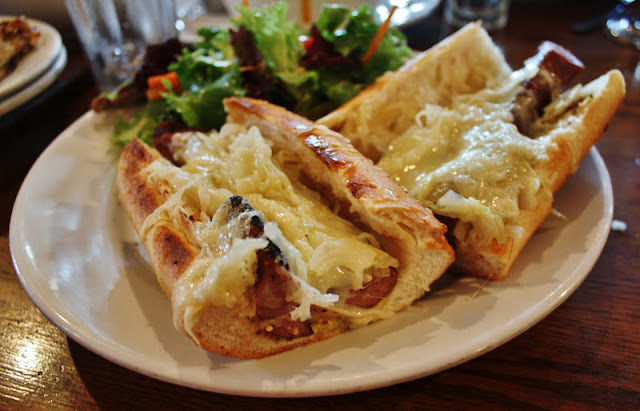 A toasted seeded long roll still had plenty of softness to squish all of the components together. Cheesy, greasy goodness at its finest. 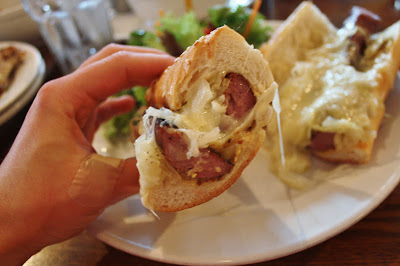 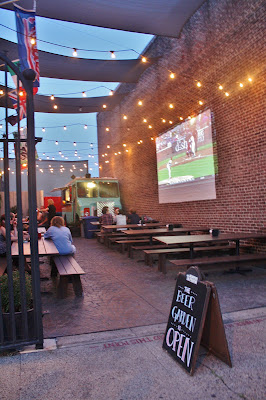 After that ridiculous amount of greasy, heavy food (don't worry, we took home leftovers!), we were in no mood for dessert.  What we were in the mood for was checking out the Phillies game on the "big screen" aka an area of the brick wall painted white.  The Memphis Taproom Beer Garden, while immediately adjacent to the restuarant, is a separate entity, with food and beverages sold from an immobile truck.  Long tables provide plenty of seating to watch a few innings of the game and do some people watching.

Overall, a fantastic dinner with notable service. Our waitress had a great personality and was so helpful with navigating the menu.  All of our dishes were enjoyable, and the atmosphere- both indoor and out- is comfortable and inviting.  We can't wait to return!