Summer is officially here- and with a bit of a vengeance.  I suppose after a mild winter, we deserve an uncomfortable summer, right?  We try to get out and about a bit more in the summer- there is no excuse for not walking to whichever neighborhood is calling our name.  There are still plenty of places in Queen Village and the surrounding area that we've been meaning to get to, so it made sense to meet for a mid-week, post-class dinner at Hawthornes Cafe- just a few short blocks away from TJU.  Hawthornes is that neighborhood eatery you'll hunt for when you move to the area- serving breakfast, brunch, lunch, and dinner, you can essentially stop in anytime.  Even though they largely focus on beer, it's a great place to eat. 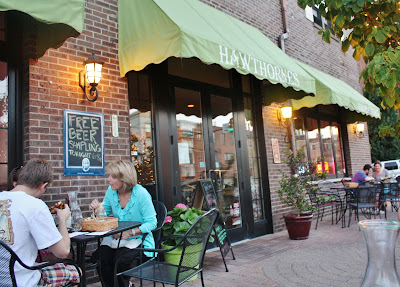 We were able to snag an outdoor table- a little rickety on the slanted sidewalk- but you've got to take advantage of sidewalk dining when you can.  The interior is spacious- much larger than I previously imagined- and feels homey with a few rustic touches-- mason jars being my favorite, of course.  The menu isn't too extensive, with a solid list of your typical starters, some sandwich options, and a few main entrees.  However, Hawthornes steps it up a few notches, being a self-proclaimed "gourmet eatery."  The option of a cheese board, as well as the attention to detail and fun flavor and ingredient combinations (at least on paper), had us impressed from the start. 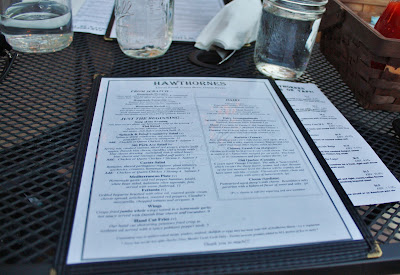 We started with a few appetizers, which started the meal on a high note.  Our first choice was possibly the most boring option on the list-- the wings ($9).  However, these came recommended after a Twitter inquiry, and didn't let us down.  Whole wings (which we fell in love with back in our college days at Moriarty's) are coated in a spicy-sweet sauce that had a hint of Chinese cuisine to it.  I was sure it was ginger, but our waitress told us it was simply a whole lot of garlic- either way, a good match for the crispy skin and juicy meat.  We enjoyed even this subtle twist on a classic dish. 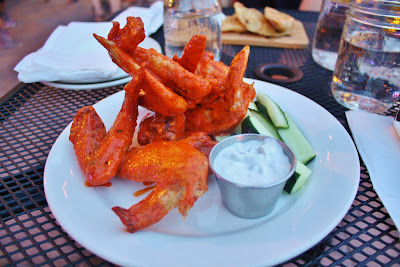 Hawthornes also makes three pasta dishes from scratch daily.  We celebrated our Polish heritage by choosing the homemade pierogies ($10).  Actually, I didn't even think about this- I was just intrigued by the option-- the day's selection was stuffed with pulled pork and provolone along with the classic mashed potato and caramelized onion. A bit pricy for an appetizer, but the pockets of dough were generously sized and perfectly crisp.  I honestly enjoyed the outer wrapper the most, as the pulled pork was very finely shredded and the provolone too mild to provide much flavor.  The drizzle of thick, aged balsamic and thick, creamy sour cream added a much-appreciated coolness to the dish. 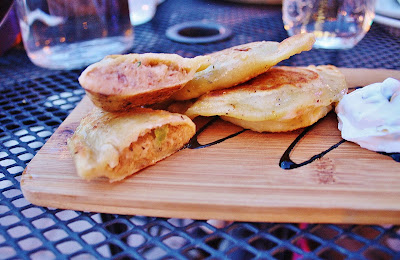 Since we were mourning our inability to attend the Burger Club meeting (happening concurrently), we took one for the team and ordered the Hawthornes Burger ($13).  Served on a luscious brioche bun (at this point, if you don't have brioche, I almost don't want it), this meat sandwich also comes with avocado, a fried egg, blue cheese, and a chipotle mayonnaise.  Sounds like an explosion of flavor, but sadly, it came out a little bit flat.  The meat itself, while cooked to order, seemed like generic lean ground beef, and the other components only contributed weakly, making this just so-so. 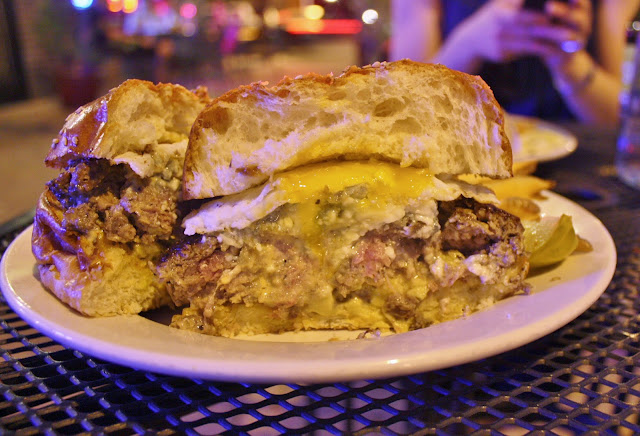 The fries- while appearing like lovely fresh cut, skin-on spuds- had a texture that was completely unfamiliar to us.  When they first arrived, they were kind of intriguing- like freshly fried potato chips, very crunchy with a good oily, salty flavor.  However, the crunchiness was almost overwhelming, and once the fries cooled down, they really were exactly like three dimensional Lay's. 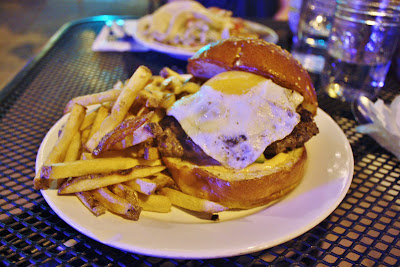 The menu varied significantly in terms of cultural context, which can sometimes work out great but sometimes be a bit much for a limited kitchen to handle.  The Baja Tacos gave Hawthornes a chance to shine, as a well-constructed fish taco is one of my favorite meals ($13).  Again, these looked great, but in terms of flavor were far too plain.  Fresh tilapia had an ever-so-slight batter coating that didn't add texture to the soft fish. 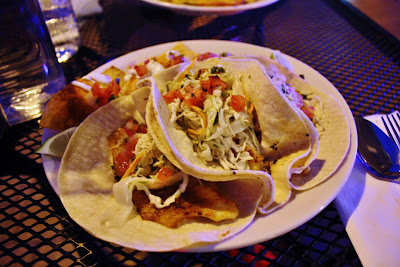 The fresh cabbage slaw seemed dressingless  (I pretty much live for the thick, white mayo-based sauce that usually accompanies fish tacos), and the promise of a little spice from poblano peppers was hard to find.  A side of corn tortilla chips, freshly fried, had the best flavor on the plate- a little fresh tomato salsa and a drizzle of that sauce I craved- but a veggie based side would have worked better than more tortilla. 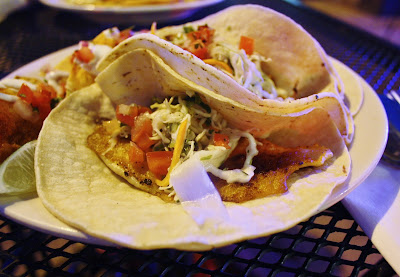 I know these complaints sound rather picky, but for a cafe that advertises itself as having a special flair for food, we expected more flavor and fun from the kitchen.  Our two appetizers were much enjoyed, and if we had simply stopped in for an afternoon snack in the sun, it would have been a perfect meal.  However, Hawthornes suffers from a common malady- once they delve into the more complicated main dishes, they can't live up to their potential.

We loved the cozy atmosphere of the place, both inside and out, and are hoping to make it back for breakfast or brunch as soon as possible.  We would definitely still consider this as a place to bring friends and hang out for a bit, but not in anticipation of the best meal in the city.