I love summer for many, many reasons (the heat is NOT one of them), including the calm and quiet of Penn's campus.  "University City" dies down a bit, which means more promotional events to get people over to the west side of the Schuylkill.  The little sister of Center City Restaurant Week, UC Dining Days provides two solid weeks of discounted meals around the area.  We've had great meals at prior Dining Days, and knew we wanted to take advantage of a few new (to us) restaurants this year.  On the cheaper end of the scale, Tria Wine Room serves up the three courses for only $15.

Previously known as Biba Wine Bar, the small restaurant (obviously) has a focus on wine, but also serves up some small plates.  Knowing how good the food is at the Tria in Center City, we had no doubts this would be a quality meal.

The regular menu is small, which is reflected by the trio of options for each course.  J chose to start with the Roasted Beets with Bulgarian Feta Cheese.  The small dish was perfect for an appetizer- a pile of super sweet, glazed roasted beets coated with a thick scoop of crumbly, salty smooth feta.  The presence of both cheese and bread created a theme for the rest of our meal-- every course included some of both.  Here, it seemed like an afterthought, since a beet sandwich doesn't really seem that appealing.  Feta and beets isn't a novel combination, but it's a classic for good reason (especially when the feta is as high quality as the cheese served at Tria).


The other vegetable-based appetizer option was the Asparagus with Parmigiano-Reggiano, Hazelnuts, and Lemon Oil.  The asparagus were still firm- a cooking feat I'm still working on myself- and well flavored with just a touch of lemony olive oil.  As we were seated next to the "kitchen" (it's hard to call it that since it's about the size of my bathroom), I was able to see firsthand how these were cooked- on a  grill that was essentially an industrial sized George Foreman.  I would have been a bit skeptical if I hadn't tried these for myself!  The thin shavings of the good stuff (ie cheese) and crushed hazelnut halves were both great garnishes, each providing punches of flavor. 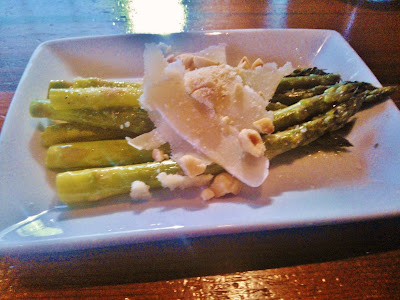 The "main course" gave us the option of two sandwiches and a vegetarian-friendly salad.  I chose the Roasted Chicken and Lancaster Cheddar Sandwich, which also involved lettuce, tomato, piquillo peppers, and a truffle aioli.  Both sandwiches come with a pile of balsamic coated arugula, which was a solid, unexpected side.  I appreciate Tria's efforts to keep much of their menu simple but delicious. 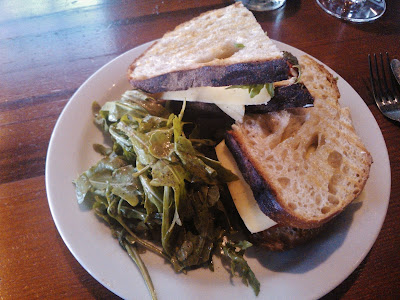 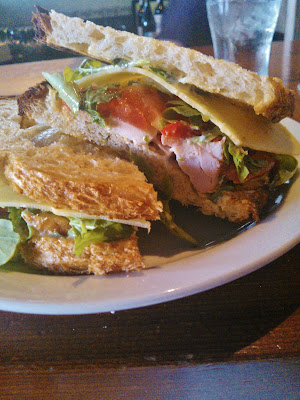 The bread is carefully toasted with a light brush of olive oil before it is constructed into a sandwich.  We really loved their house bread- it's thick and fluffy without being heavy, and has a great smoky crust.  The crisp bread was a star both in terms of texture and flavor. However, the chicken itself was fairly plain (although well cooked), and both the cheddar and the aioli contributed less to the overall combination than I expected.  While not particularly exciting, it was still a sandwich I could probably eat every day, and large enough to be a hefty individual dinner portion.

The other sandwich option was even better.  The same oiled and toasted bread, different in almost every other way.  Thick slices of fresh, creamy mozzarella melted over the warm bread, while arugula, piquillo peppers, and tiny, crispy bits of proscuitto (gourmet bacon bits?) filled up the rest of the sandwich body.  Fresh pesto and a garlic vinaigrette made this combination a slight play on the classic caprese.  While it was pretty heavy on the garlic, the sharp and spicy flavors of the pepper, basil, and arugula made this a sandwich that was impossible to put down. 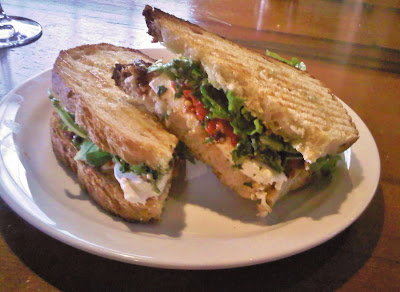 Of note, the one piece of fancy kitchen equipment that Tria's kitchen is able to hold is a meat slicer.  This thing is serious- firetruck red and in a glass museum-esque case.  It was fun to watch the kitchen staff handling it as each individual order came in.

After all that bread and cheese, the last thing I wanted was more of the same.  Tria serves two desserts off of their regular menu, so I at first was disappointed that these weren't the third course options for Dining Days.  Instead, they offer three variations of a cheese plate.  Since we knew nothing from the names of the cheeses, we chose them based solely on their accompaniments, steering me towards the Delice de Bourgogne served with local honey.  The pile of gooey cheese that arrived was a bit of a surprise, but ended up being my favorite part of the meal (and you thought I was raving already!).  A quick Wikipedia check tells me that Delice is a French cow's triple creamed milk cheese.  Essentially, this is stinky butter- and pretty much the most delicious cheese I've ever had.  A tiny piece of bread topped with a generous scoop of the cheese and a drizzle of honey- turns out, stinky cheese is a dream dessert (40% butterfat and sweet honey might have something to do with that).

The other cheese plate really couldn't compare, but was a fun contrast to the Delice.  Named "Ewephoria," we had some idea that this was a sheep's milk cheese, and the pairing with Allagash poached dried cherries had us sold.  A hard cheese with a surprising sweetness, it was best eaten in small pieces all on its own- even adding it to a small corner of bread took away from the slightly salty, caramel flavor.  The cherries were also enjoyed on their own- fat, wet tart cherries that again provided that "dessert" touch. 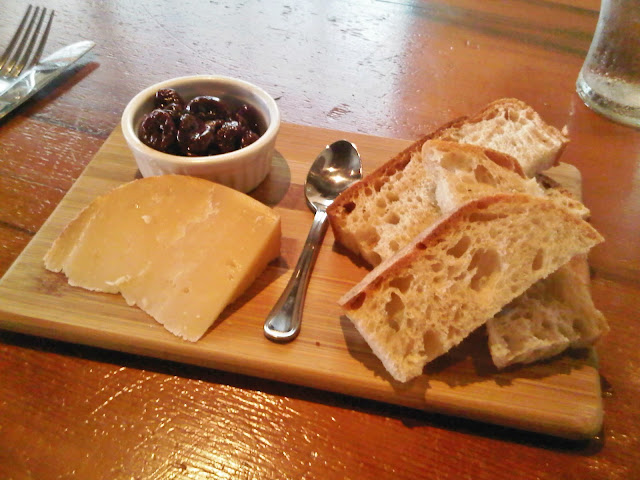 Although Tria may seem to revolve around it's alcoholic offerings, we have to say it's one of the best simple-yet-gourmet meals we can imagine coming from such a tiny kitchen.  I also always imagined it was a tiny hole in the wall, but it's actually much easier to grab a seat inside than it seems.  We wouldn't hesitate to pop in for a snack or a light meal, especially if we were in the mood for a taste of excellent cheese.  Even though the UC Dining Days offerings are extensive, take our advice and try the steal offered at Tria.