Even though it's been almost a month since I moved to my new digs, I've admittedly been bad about exploring the area.  The Italian Market used to be a destination for us, but now it's a mere three blocks away.  Thankfully, a dinner date with friends provided the perfect opportunity to get started with a rainy Saturday night dinner at Monsu.  A Sicilian Italian restaurant run by one of our favorites, Peter McAndrews (we've already revealed our crush on him here), Monsu maintains the Italian foundation that McAndrews is known for, with additional influences from Spain and France.

Located in the same space that the Italian Market rendition of Paesano's initially occupied, the restaurant is on the smaller side, dimly lit, and simply decorated, making for a pretty intimate dining experience.  Our waitress for the evening was a Modo Mio veteran filling in for a night, but she was very sweet and was sure to have all of our questions answered by other staff members.  While we were menu-perusing, she brought out a little amuse bouche- a piece of toast with a bit of spicy chickpea puree, a sprinkle of shredded Parmesan, finished with a drizzle of olive oil.  Nothing fancy, but still tasty. 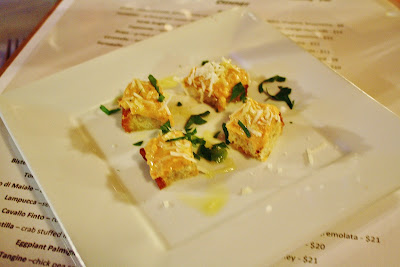 Like the other restaurants in the McAndrews empire, Monsu offers a 4-course "Turista" menu for $40.  A & I decided not to partake, but the other two in our group did, offering a good mix of dishes (and a comparison of portion sizes!).  After we placed our order, we were given a couple of pieces of a dense and doughy foccacia bread (one of the highlights of the meal thanks to my love for chewy carbs) and a bowl of olives and raisins soaked in a slightly sweet and citrusy olive oil.  I'm a sucker for good bread service. 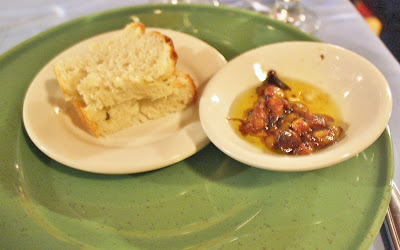 We started out with an antipasti that came highly recommended- the chicken liver bruschetta ($9).  A few pieces of thinly sliced, grill-marked toast rested on a generous disc of some of the creamiest chicken liver pate I've ever had.  Slices of fresh figs, pinches of goat cheese, and a cherry reduction sauce made for a classic sweet and savory flavor combination.  We had a hard time finishing this though, and were thankful for a little help from our friends- the regular portion sizes here are large.  However, the turista menu pares the portions down considerably- by at least 50%.  Keep this in mind depending on your appetite! 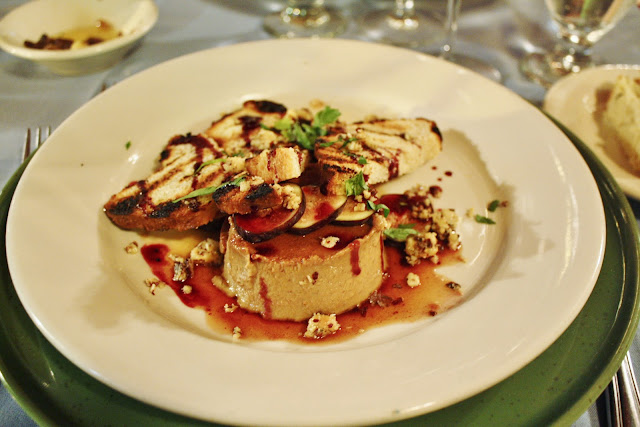 Monsu used to do half-portions of pasta but unfortunately is no longer offering this option.  We decided to split two pasta dishes, starting with the rigatoni Trapanese ($14). Taking inspiration from Trapani, a region of Sicily which grows a plentiful amount of almonds, the fat tubes of pasta are tossed in an almond based pesto with chunks of soft eggplant.  The "pesto" is a puree of almonds, tomatoes, garlic, and of course, basil.  However, the almonds and tomatoes provide the coloring for the sauce, so don't expect any vibrant green.  This sauce was similar to the romesco we had at Jamonera, and I loved it just as much. 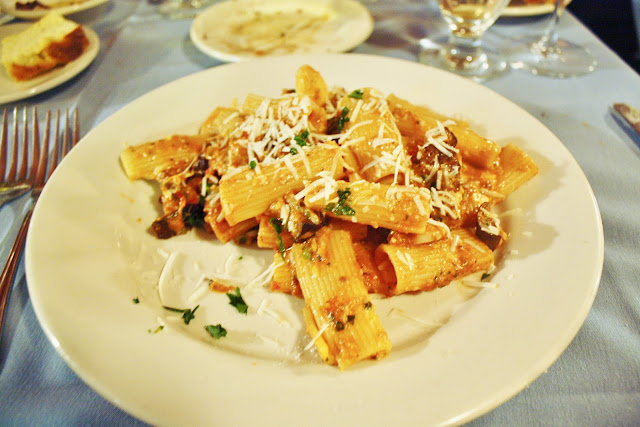 While the pasta had a nice bite to it as any fresh pasta should, the gnocchi ($16) created a good contrast- it was impossibly light and airy, with a mild ricotta flavor.  The sauce was also relatively mild, tomato-based and dotted with bits of crab meat and chopped herbs.  Not a vibrantly flavorful dish, but a light version of gnocchi that is reasonable for the late summer months. 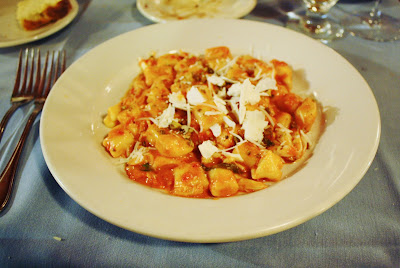 We went a little heavier on the meat course, opting for a slow-braised lamb dish served in a ceramic tagine, giving it a bit of a Moroccan flair ($23).  This was also an enormous portion of meat- super tender but also super salty!  Steamed broccoli swam in a pool of broth underneath the lamb, and the dish was topped with a thin crespelle- it seemed sweet potato based?  A little chopped olive salad sat atop the crespelle. McAndrews keeps his meat dishes pretty simple, highlighting the main ingredient, but I felt that the dish needed something to balance the hearty (and salty!) lamb. 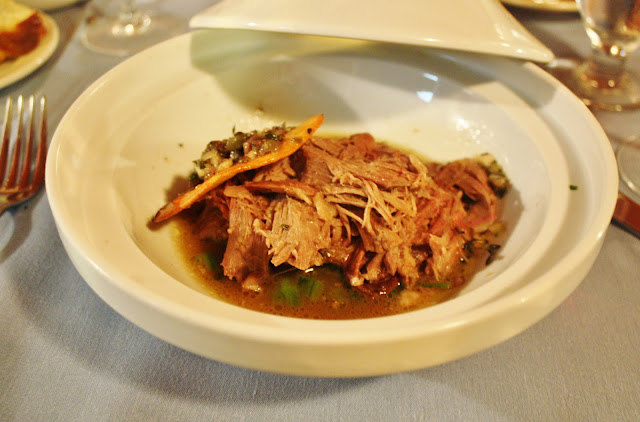 There were three dessert options- a flourless chocolate cake, cannoli, and a coffee panna cotta, but none of these sounded all that appealing after a pretty hefty meal.  However, dessert came with the turista menu, so our table tried the chocolate cake and the cannoli, neither of which I felt were overly inspired. Looking back on our meal at Popolino, we felt the same way about their desserts as well.  Perhaps McAndrews should invest in a pastry chef...

However, the meal itself was a huge success.  We were able to taste plenty of other dishes thanks to our "sharing is caring" policy amongst our friends- other highlights were the pulpo antipasti (a cold octopus salad) and the swordfish entree.  The menu seems to be constantly changing (the online version is completely different from what we experienced...) which means we'll certainly be returning.  Portion sizes and pricing makes it the perfect place to go and split a few plates for an inexpensive meal!

Monsu
901 Christian Street
BYOB and cash only
Posted by A and J at 1:33 PM