I've slowly been getting used to cooking for one in my new kitchen.  It's definitely been a learning experience!  After a few weeks of trials and errors, I was finally brave enough to invite A and her fiance over for dinner.  Ever since we had dinner at Jamonera, I've been thinking about the romesco sauce served with their deviled egg dish.  A couple of dinner guests gave me a great excuse to try making it myself!  I based this meal on  Healthy.Delicious.'s recipe for Romesco Roast Salmon, with a few alterations, of course.

This well-balanced meal had four components: a protein, a sauce, a starch, and a veg, so I was lucky A showed up early to lend a helping hand.  Before she arrived, I whipped up the romesco sauce- the easiest part of the dish!

The first step is to roast the tomatoes.  My new place has an energy efficient halogen oven and I have yet to summon up the courage to try it out (help?!).  Instead, I made hatch marks on the top of the tomatoes with the tip of a knife and microwaved them for three minutes along with a clove of garlic. 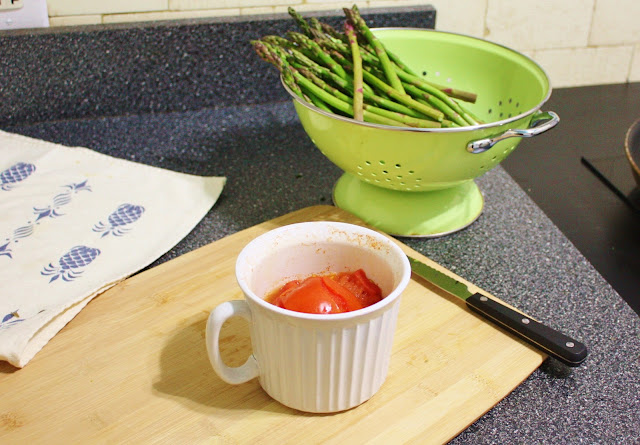 The tomatoes cooked down perfectly well in the microwave, so I tossed them into the blender along with the rest of the ingredients (hold the olive oil).  I felt like this sauce was straight off Sandra Lee's show "Semi-Homemade" since it was so easy. 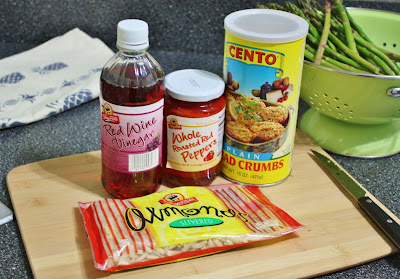 A quick blend of the components was all it took- I added the oil while the blender was going to help emulsify it.  If you like a chunky sauce, it only needs a few pulses- mine came out pretty smooth. 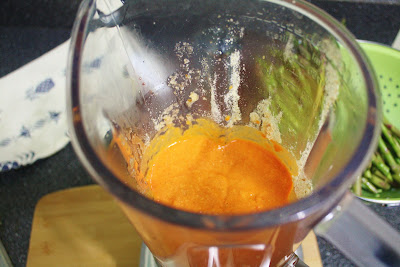 The other reason this recipe really stood out to me was the carb involved: pumpkin grits.  I had coarse yellow cornmeal on hand, so I used that instead of true grits.  Unfortunately, I didn't follow the directions on the bag to first mix the cornmeal into cold water, then add boiling water.  The result was a clumpy mess that required 15 minutes of whisking to make presentable... Oops!  The addition of half of a can of pumpkin to the water and cornmeal was easy enough, just had to decrease the water a bit (I used 1 cup grits, 2.5 cups water, 1 cup pumpkin).  Note to self: Polar brand pumpkin contains carageenan. Gelatinous pumpkin=not very appetizing. 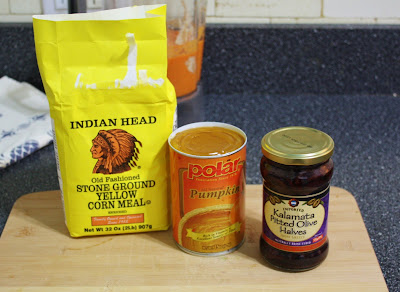 I have limited burner space, so I sauteed the asparagus first for ten minutes or so- just a little salt, pepper, and olive oil.  Thankfully, I got lucky at the grocery store, finding some really tender, skinny asparagus that cooked quickly. 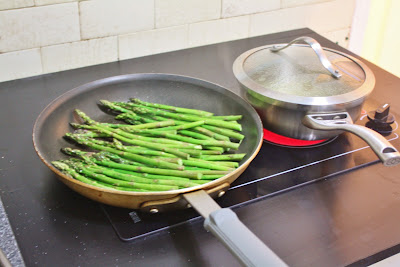 After I transferred the asparagus to a covered plate, I started the salmon.  I splurged on perfectly cut fillets from Whole Foods, which made splitting the salmon into portions a non-issue.

The meal came together quickly as soon as the salmon was cooked through (I like mine a bit pink in the center).  Top the salmon with a few spoonfuls of sauce, add kalamata olives to a scoop of pumpkin grits, a hearty serving of asparagus and you're ready to eat! 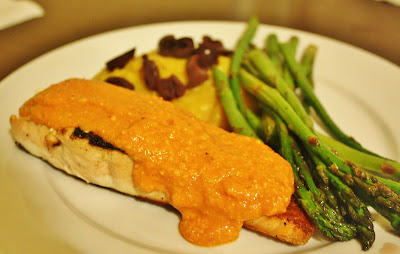 The replacement of oven baking with stovetop cooking meant the sauce wasn't cooked alongside the fish.  Next time I'd toss it into a saucepan to heat it up before serving (need extra burners...).  Otherwise, the romesco was just the way I remembered it- nutty, garlic-y, with a little acidity from the tomatoes.  Overall, a great pairing with the fish.  The kalamatas added a needed saltiness to the grits while the pumpkin gave extra creaminess and that fall flavor that everyone seems to love. 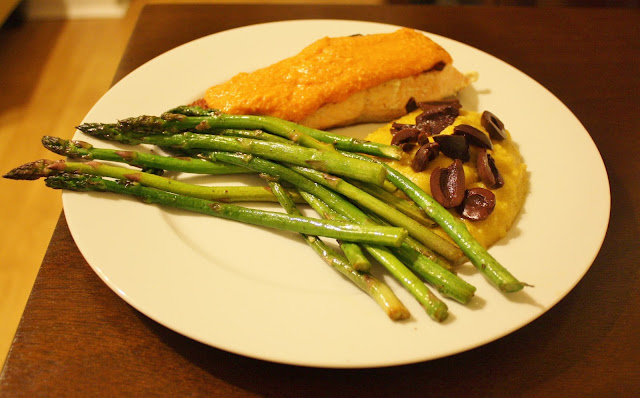 I had lots of romesco leftover- it's a really versatile sauce: I've eaten it over eggs for breakfast and as a spread on sandwiches for lunch.  Like hummus or pesto, the sauce itself could also be made in many alternative ways- different types of nuts, the addition of olives or beans, various fresh herbs, etc. I'll definitely be making it again!
Posted by A and J at 10:48 AM