Even though it's not exactly a barbecue destination, Philly actually has a few decent options in that category, including Percy Street and Sweet Lucy's.  Regardless, restaurateur Stephen Starr saw an opportunity to open another BBQ venture, conveniently located next to his popular German beer hall, Frankford Hall.  Essentially an outpost of Brooklyn's Fette Sau, meaning "fat pig" in German, Starr was able to make a copycat BBQ joint with his own special touch, creating a fun and rustic environment to chow down on some serious smoked meats.

The wide-open space is lined on one side with chalkboard menus, cases of food, and a bar- after entering under the neon pink sign, make your way along this side to place your orders.  Trays are assembled with a bit of teamwork by the staff to expedite the line. Next, grab a seat at one of the many booths or picnic tables- located both inside and out. 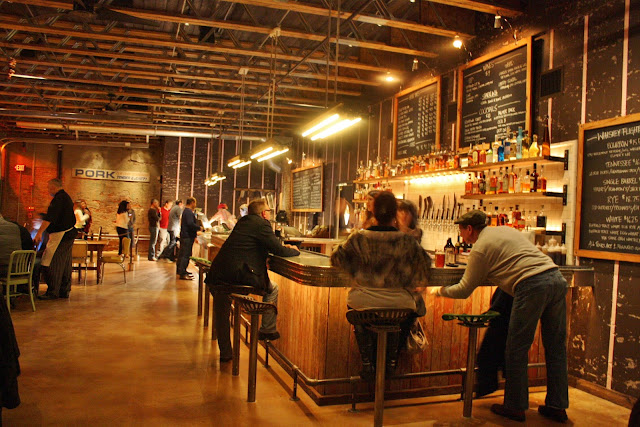 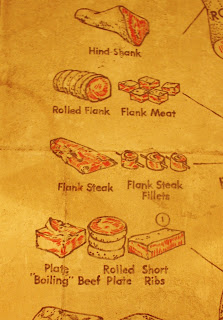 Before I dug in, I took a minute to admire the "barnyard chic" decor- exposed beams and brick, aged wood bar, tractor seat stools, and lamps crafted from tin cans and chicken wire.  The cement wall next to our table was tastefully decorated with a informative guide to various cuts of meat.  Even the bathroom stalls are made with what seems like scrap OSB.  A little bit over the top, but that's what the Starr empire is good at.

The place was pretty empty on a Thursday evening, so we were able to place our order without a bit of a wait.  We were undoubtedly overambitious with our decisions, but... there are far too many options.  Advice: go with a big group and split as many things as you can.

Meats are served by the pound (a quarter pound is still plenty to share) and sides in a small or large version. Between the two of us, we ended up conquering six types of meat, four sides, and two desserts.  Rolls were thrown in for free.

In no particular order: the first two sides were potato salad ($3.50/small) and coleslaw ($3.25/small)- two backyard BBQ classics.  Fingerling potatoes were kept whole and tossed with a light coating of a vinegar and Dijon based dressing as well as a bit of chopped parsley and chives- definitely a German-style potato salad, but nothing exciting.  The coleslaw on the other hand, was a big hit.  Purple cabbage and shaved carrots had lots of crunch and an acidic, almost pickled flavor profile.  A bright (and beautiful!) slaw. 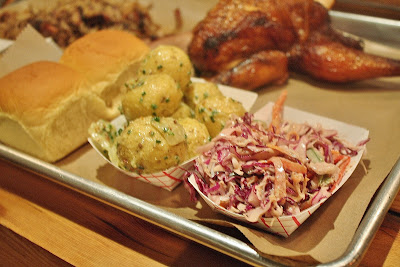 BBQ is notoriously difficult to photograph, so bear with me on these pictures. Pulled pork ($8/half pound) is another classic- I typically use it as a measuring stick by which to judge a BBQ joint.  However, Fette Sau's was definitely on the bland side, some nice burnt edges but it needed additional sauce to really make it worth eating.  Additionally, it was definitely on the colder side of lukewarm, an issue we had with almost all of our meats.  Obviously this pork isn't coming straight out of the smoker, but I like my BBQ served hot.  The black Angus brisket ($4.25/quarter pound) was relatively lean, but with a decent salty, smoky infusion of flavor.

Luck was on my side- my tray of goodies was full of items that ended up being much more exciting.  On a whim, I ordered the flank steak (not a typical BBQ item?) and also snagged the pork belly- both of which ended up being fantastic. 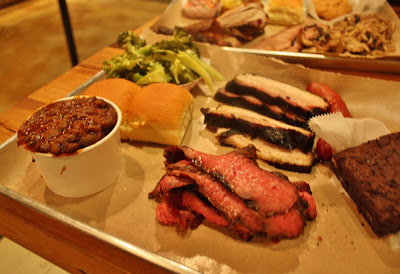 However, the tub of "burnt end" baked beans ($4.50/small) called my attention first- a sweet and spicy conglomeration of beans and slow cooked shreds of beef that provided a really robust, meaty flavor to a sauce perfectly balanced with a hint of molasses. 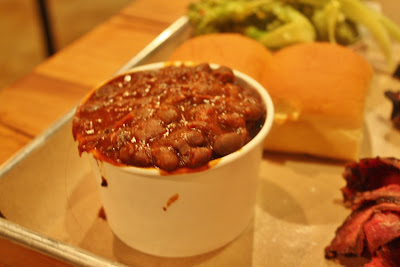 About that flank steak ($9/half pound): a perfect medium pink (the only meat actually served hot, too!), peppered edges, juicy and tender- I'd like an 8 oz cut of this please.  Definitely worth a return visit for this sleeper hit. 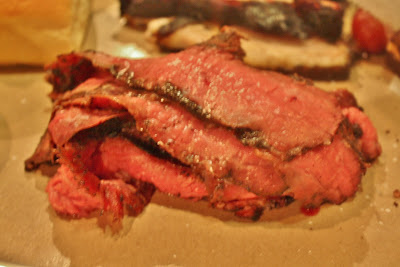 A half pound of the pork belly ($9) also proved to be a generous portion with layers of crispy edges, melt-in-your-mouth fat, and perfectly cooked pork.  Don't let this get cold- the fat will actually congeal- but squares of belly served up on a potato roll with a dab of beans makes a fantastic sandwich. The Nicolosi hot Italian sausage ($8) finalized the meat-fest- spicy and snappy, this guy could definitely hold his own amongst the South Philly competition.  Again, a bit of a surprise on a BBQ menu, but I think it helps round out the menu.  The original Fette Sau has a lengthy list of meat options- from Cornish hen to duck breast to pig's tails- can we hope for a menu expansion in the future? 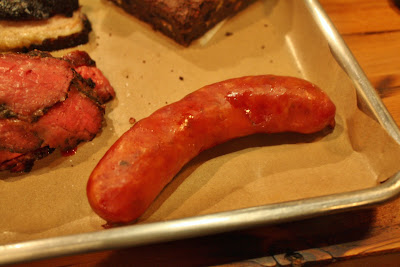 The last side was the broccoli salad ($3/small)- I'd read that it was "boring", but I definitely needed a dose of something green on my tray.  Stems and stalks are blanched and then lightly pickled in a red pepper and vinegar sauce- again, plenty of crunch but a little too much acidity.  Oddly, this acidity helped cut the salty smokiness of the meat, so I appreciated that aspect of the salad.  Wait.. this isn't a "salad" at all- it's just broccoli! 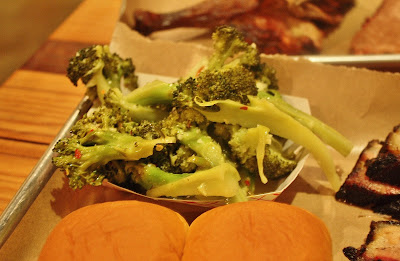 I hear another good way to balance all that meat is to eat dessert.  The peanut butter cookie ($1.50) was a good inch and a half tall, studded with peanut butter chips and a subtle sweetness.  A chewy, sweet-and-salty option that pairs well with BBQ. 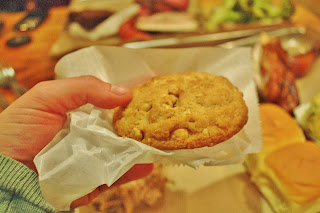 However, the bacon brownie ($3) was much more exciting. Thick, fudgy, and full of caramelized bacon- a true indulgence.  Chopped walnuts gave it a third dimension of flavor and a bit of crunch that really made this an outstanding dessert.  Warning: this is the definition of "rich." Plan on sharing and/or revisiting this the next day. 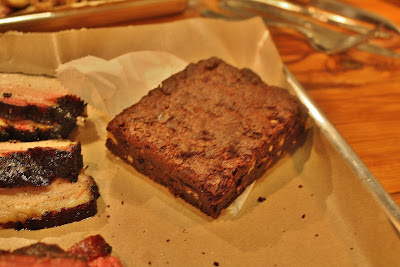 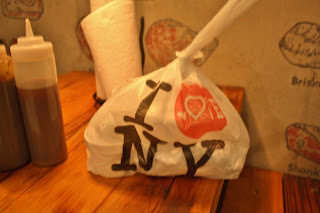 Speaking of revisiting, we had plenty of food leftover to take home.  We flagged down a staff member and he brought us a lid for the beans and sheets of foil to wrap up the meats, as well as a plastic bag to pack everything up.  I wasn't too pleased by the "I Love NY" label on the bag (I don't really looove NY)- perhaps the Brooklyn version had some sort of plastic bag excess.

Fette Sau definitely had some hits-and-misses, which was a surprise to me since the chef has so much experience and success in the BBQ realm.  However, there are certainly enough things to bring me back, perhaps in the spring when we can actually enjoy the outdoor space that Starr so carefully crafted.