Recently, I've found myself struggling to come up with good new-to-me restaurants to try- a problem I don't recall ever having since starting this blog.  I'm always in charge of choosing restaurants for date nights, and lately I've found it almost a chore (I know, poor me!).  However, my recent marriage has granted me half-ownership of a car, allowing the possibility to explore more distant neighborhoods.  Even though Fairmount isn't technically "far away," it doesn't have the ease of public transportation access of South Philly, so I'm embarrassed to admit that I have never spent time in most of the Art Museum area.

Lemon Hill was a perfect introduction to the neighborhood (after 20 minutes spent trying to find a parking spot!) and has me intrigued to get back there soon.  The "gastropub" (I hesitate to call it that, since I don't see it in the same category as some of the Philly gastro staples) has Mitch Prensky's name on it, and even though he's not the chef there, my love for his food and his philosophies have had me interested since its opening earlier this year.

The space, though relatively small, is bright and spacious, and the bar is separated from the main dining room which I appreciated- they have received a lot of attention for the drinks side of the operation, so I imagine it can get loud and crowded at times.  The menu is short and very seasonal, with most of the dishes on the small side.  Specials are listed on a chalkboard, and feature mussels (rotating preparation), a main dish, and a fish. 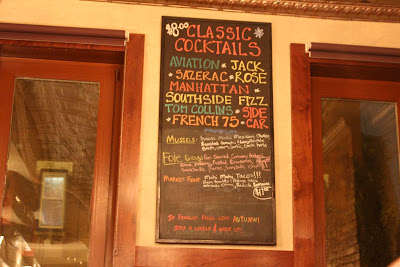 I had a hard time choosing, but food stalking other diners actually helped me decide.  The foie gras special sounded amazing, but looked tiny- isn't this always good to know?  I started with a "Vegetable" (literally one of their menu sections, which I obviously loved), the Winter Squash Latkes ($6).  They were able to combine several fall-specific flavors without being cliche, combining the slightly sweet butternut (?) pancakes with housemade spiced pumpkin butter, thinly sliced crisp apples, and a few crunchy toasted pumpkin seeds.  A bit of creme fraiche stood in for the more classic sour cream.  The cakes were just barely held together, and combined with the rich pumpkin butter, were very comforting- I could eat these for a weekend brunch on a cold day. 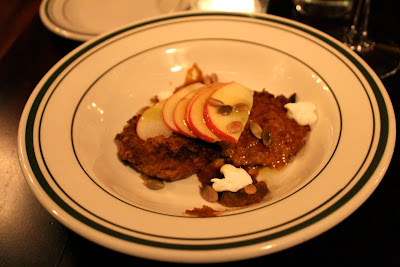 We also ordered the House Made Pretzels ($6), located in the Snacks part of the menu- a good nod to classic bar food with a few fun twists.  The pretzel sticks were served warm and were slightly dense and chewy- exactly the consistency I require in a good soft pretzel.  Rye seeds studded the dough, and fat flakes of salt melt in your mouth.  The accompanying mustard was whole grain, but didn't have the bite that I typically associate with whole grain mustard- instead, it was tangy and sweet, similar to a honey mustard.  The fact that both items- the pretzels and the mustard- are made in-house is impressive to me- each component takes a special finesse, but they easily nailed both. 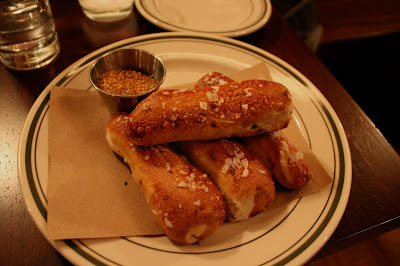 A diner at a nearby table ordered the Tagliatelle pasta plate, and one glance steered me away from the sandwich I thought I had settled on.  The pasta is ALSO made in-house.  Thick, chewy ribbons contained bites of softened black kale and smoky chanterelles, and a thin cream sauce with a hint of citrus held well to all of the components ($12).  A hefty sprinkle of Pecorino finished the plate- you can never have too much Pecorino, in my opinion.  The portion was deceivingly enormous, especially considering the price point (although, as one of the few vegetarian options, it's a fair price), leaving me unable to finish the plate (this almost never happens!). 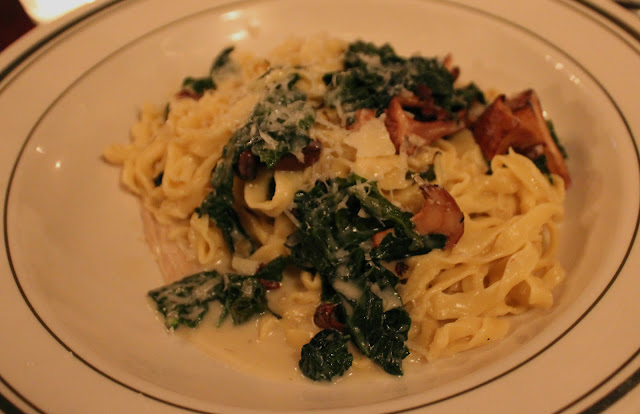 I didn't feel too bad about not ordering the sandwich I had my eye on, since my husband ended up ordering it for himself.  The Korean BBQ Short Rib sandwich ($14) originally grabbed my attention because of the inclusion of (housemade, obvs) kimchi, one of my all time favorite foods.  The sandwiches are easily the largest plates served at Lemon Hill, with a foot long beef sandwich paired with a tall pile of fries. 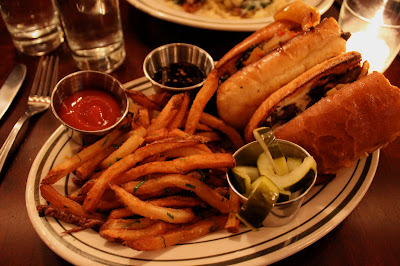 He asked for the pickled cucumbers on the side (for me), but they weren't as great as I had hoped- faintly sweet and without the Asian flavors I was expecting.  The bread itself was also a disappointment- too soft.  Even though it was lightly toasted on the inside, I would have preferred a crustier roll.  However, the beef and the kimchi certainly made up for it- the beef alone having that melt-in-your-mouth meatbutter texture that Korean barbecue is famous for.  The kimchi was like none I have ever experienced before- made with a large assortment of vegetables, with some large chunks remaining that were still quite crisp. 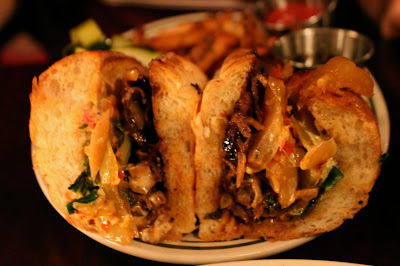 There was a fair amount of chili sprinkled throughout the kimchi, giving it considerable heat- making me like it that much more.  The combination of salt, vinegar, and spice is my current trifecta of choice, although the salt component was definitely heavy handed.  I ended up eating a pile of the kimchi alone (removed from half of the sandwich), and it may have been my favorite part of our meal.  I'm still so impressed at all of their successful in-house endeavors.

Our evening ended with a trip to the Eastern State Penitentiary, a site I've never visited before, for their annual Halloween Terror Behind the Walls.  It was an easy stroll from the restaurant to the jail, and together made the night a terrific Friday night date (the haunted house is open for one additional weekend, for those of you who haven't been!).  With so many Philly classics and new hot spots, Fairmount is definitely a great neighborhood- we'll certainly be headed back soon.