I really believe that there are very few things that are better than an indulgent, delicious weekend brunch spent with great friends (or family!).  Here in Philly, there is certainly NO lack of great places to eat this lazy midday meal.  However, we admit to keeping it easy and typically close to home (Parc and, if we're really feeling bold, Lacroix are our less-than-five-minutes-away favorites).  Hopping in our friend's car this past weekend, we discussed our brunch options at our Old City destination.  As soon as I mentioned Khyber Pass Pub, the rest of the girls immediately jumped at an opportunity to try a Southern style meal.  A quick phone call revealed that there was no wait in the dining room AND that fried pickles were in fact on the menu (a requisite).

A sunny corner table was acquired and our first request was an order of those pickles, one of the daily specials.  Khyber has a distinct way of preparing them, with thin cut slivers dredged in a grainy cornmeal batter.  They almost no longer taste like pickles, but the salty, crunchy pieces were still super addictive (especially in the garlicky aioli dip). 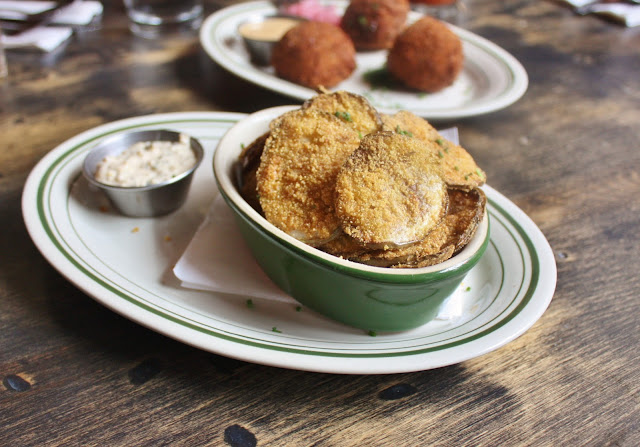 Our other shared appetizer were the Boudin Balls ($5).  Khyber's menu has an emphasis on Creole/Cajun/Southern dishes, many of which are difficult (if not impossible) to find elsewhere in the city.  Boudin is certainly one of them.  A rich sausage made with dark strands of shredded pork, lots of Cajun spice, and a bit of rice to hold it together.  Apparently a convenience store specialty, the mix is then battered and fried- what else could make it better? 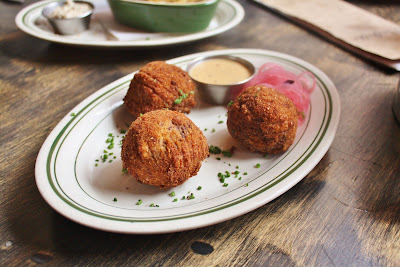 Warm, rich, and a bit smoky, it almost tastes like the stuffing you would want in a Cajun style turkey.  The mustard sauce it's served with was tangy with a bit of heat- but these balls don't need any additions. 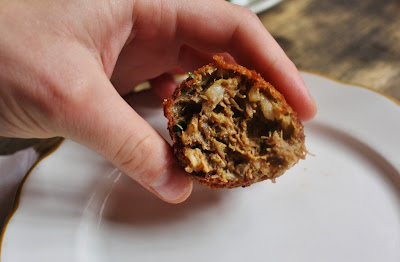 Amongst the four of us, we managed to cover a good deal of the menus- both brunch and the regular lunch/dinner menu.  The portions at Khyber are enormous, so be prepared to take lots of leftovers home.

If you're looking for an incredibly comforting Cajun dish, you probably wouldn't look much further than jambalaya ($12).  A hearty mix of shrimp, chicken and sausage is mixed with red beans, rice, and a thick tomato based gravy- while Khyber's version might not be 100% authentic (not having been to New Orleans myself, I can't be the judge of that!), it's a darn good dish. 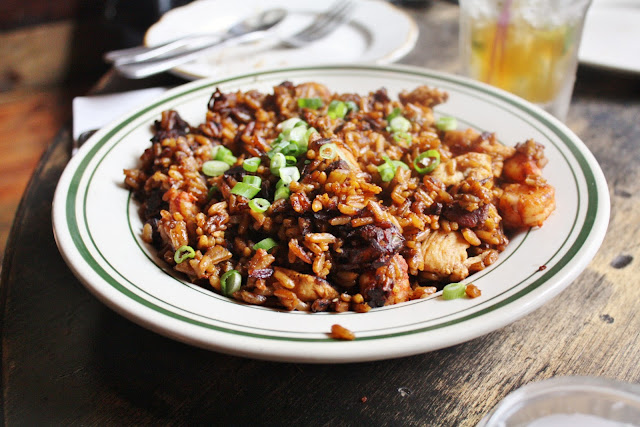 Did I mention hearty and comforting?  It truly is the theme of the food at Khyber-- you're not going to have a light meal or stick to any healthy diet here, but every dish calls to your soul.  Feeding that is just as important as fueling your body, right?  The Big Ass Biscuit and Gravy ($8) surely fits that bill- and yes, it is pretty darn large.  Thick, flaky, and chewy, I might just have a thing for biscuits.  Especially those that are smothered in a thick, spicy sausage gravy without becoming soggy- the biscuit has to have a certain density to avoid this. 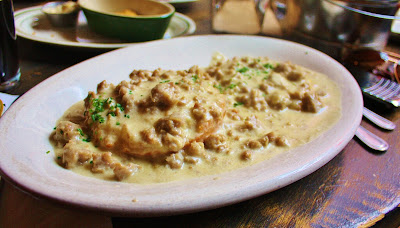 My brunch of choice almost ALWAYS contains eggs.  And hot sauce, but that's another story.  It wasn't difficult for me to choose the Gulf Oyster, Spinach, and Bacon omelet ($14).  I've never seen oysters as an omelet filling before, and the chewy, briny animals were generously distributed along with just-wilted baby spinach and thick chunks of salty bacon.  If you're a fan of oysters, definitely consider them as a breakfast food!  The dish came with my choice of grits or hash browns, and our waitress carefully considered my question of which she recommended.  Eventually I decided on the grits, which were not a disappointment.  I wish making such thick, creamy grits was as easy to do in the microwave, because I would surely eat them more often.  With a few hits of hot sauce (yeah... I told you), it was the perfect side. 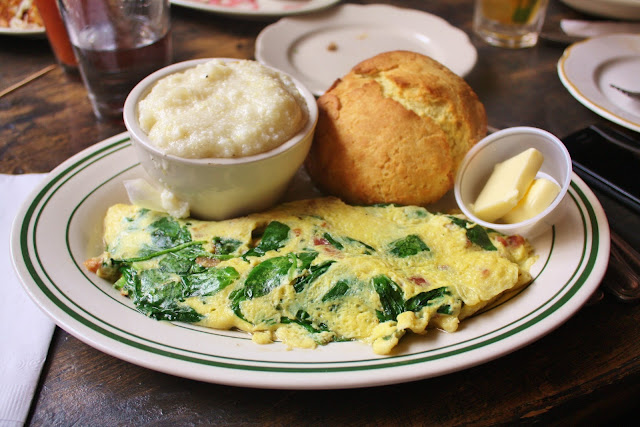 Another one of my favorite breakfast dishes is a hash, and Khyber has one that is particularly noteworthy ($12).  Even though it looks a bit of a mess, the hash consists of chunks of roasted sweet potato, lots of cooked down collard greens and large strands of beef brisket- a delicious "refrigerator" combination (you know.. all the things leftover in your fridge!).  Topped with two over-easy eggs (or your preferred style), it really gets good when those yolks run all over the base of the hash. 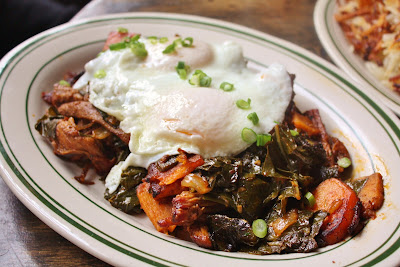 The hash browns proved to be semi-miraculous, as our friend who doesn't like potatoes (I know... right?) tried a burnt bit and approved.  A side order of the shredded and pan-fried potatoes is enough to split amongst a large group, and has just the right amount of crispy edges and piping hot fluffy "insides" ($3). 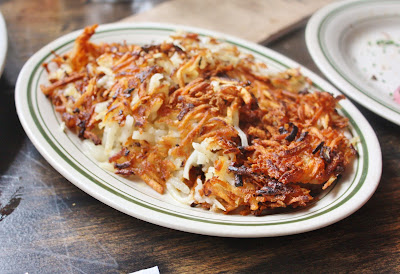 Just as on our previous trip to Khyber for dinner, we had a wonderful time and couldn't stop raving about the food- it's super unique for Philly which always makes it that much better.  It's a large enough space that it was never crowded while we were there, which is another plus point- no waiting in long lines or crammed into a tiny space.  Just enjoy a leisurely delicious brunch with friends- like I said, there's nothing better!