This month's Burger Club "meeting" was held at Red Owl Tavern, the newbie restaurant in the also-newbie Hotel Monaco in Old City.  The Monaco is the second Philadelphia area hotel in the Kimpton line, following just a few years after one of my personal favorites, the Hotel Palomar near Rittenhouse.  While we haven't heard much about the Red Owl, we did come in with a few preconceived notions.  First, we're somewhat familiar with Executive Chef Guillermo Tellez, as he was formerly the chef at Square 1682 (ironically or not, in the Hotel Palomar- he must love the Kimpton benefits).  Second, we had recently read a scathing review from Phyllis Stein-Novack at South Philly Review, and it became an inside joke that Red Owl "almost ruined Edward's birthday!" (said in mock horror).

The restaurant spans a long corner slot at 5th and Chestnut (nobody from our group could come up with the previous use of this building) with the hotel entrance immediately adjacent.  The pastry chef works in a tiny kitchen near the entrance, enticing us all with a display of pies and cookies before we even ate dinner.  Our group had a space reserved upstairs, in a loft complete with all the loft-y accoutrements: lots of dark wood and black metal and a few uplights (Mrs. Stein-Novack's complaints of lack of light are certainly founded).

Unlike some of the other restaurants we've convened at, Red Owl only has a single burger, the "Big Red Owl Burger"- the waiters simply had to ask us how we wanted our meat cooked.  Thankfully we had a delicious distraction while we waited- housemade truffled popcorn.  This stuff was insanely good and super addictive.  Our table of ten went through several buckets of it in half an hour- warm, salty, buttery with a kick of truffle oil. 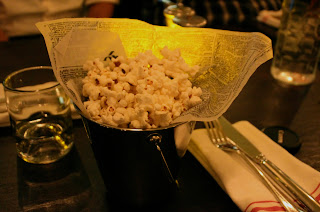 The burgers all arrived almost simultaneously- impressive for a group of 20+.  Of course, this means that there were probably a few mix-ups and a few overdone burgers, but that's pretty much par for the course.  The burger is described as topped with crispy bacon, cheddar, herb sauce and onion marmalade, and is a hefty serving living up to it's $15 price tag. 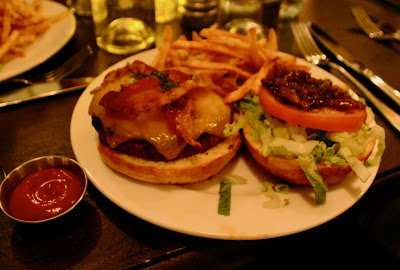 In examining the burger upon it's arrival, it's clear there are a few changes from the menu description.  Shredded lettuce and tomato are little extras (fine by me but not by all others) and the "onion marmalade" clearly had raisins within.  I don't like raisins, and I definitely don't want them on my burger next to lettuce and bacon.  That's just weird.  Thankfully, the mix consists primarily of  caramelized onions which were easy to remove. 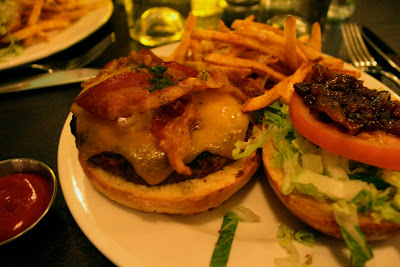 The bun was a good fit for the meat, with a floury surface and a light texture.  The bacon and cheddar added the necessary salt and grease to the well seasoned lean beef.  The patty isn't monstrously thick, making it that much harder for the chef to reach the requested medium-rare.  The lack of pink didn't kill this burger, though- a definite sign of a well prepared sandwich made with quality ingredients. 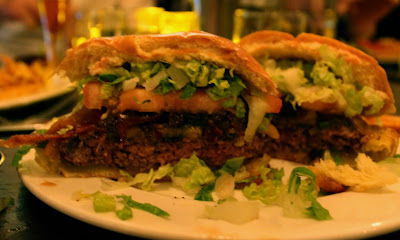 Other club members decided the onion marmalade really made the burger- a hint of cinnamon and sweetness was reminiscent of an empanada.  I'm still not convinced that either cinnamon or raisins belong in a burger, but to each their own- and again, a nod to the chef for making such an odd topping a hit with many in our group.  The crispy fries lightly coated in shaved pepper jack cheese were a good complement to the meal - a special touch to an otherwise normal side.  Since we never actually perused the rest of the menu at the restaurant, I'm not convinced I'll make it back here for a regular meal.  But if you're in the neighborhood and need a solid burger in a lively atmosphere, Red Owl could be your spot.