We've skipped a Burger Club meeting or two in the past due to the fact that the meetings were held at restaurants we've been to before.  This month, we faced the same problem;  however, we'd never tried the burgers at City Tap House, so felt the trip was well worth it. Besides, we work nearby and honestly, it hurts us to miss out on seeing our burger-y friends!  For those of you who haven't visited, City Tap House is a serious food and drink mecca.  To start, it's enormous, with several different dining areas, including the best outdoor seating in the city (although that is really only open during the summer months).  On top of that, the menus are extensive on both the solid and liquid sides, with constant special events and a number of private parties daily.  It's just a cool place.

The menu includes three burgers, a good variety for different tastes.  The overwhelming choice of our group was The Tap Burger ($14 but the Club was graciously granted 20% off).  Described on the menu as being served with "crispy pork belly, lancaster cheddar, agrodolce onions, beer gastrique, dijonaise," the all beef burger sounds too good to be true.  So many toppings! Lots of great flavors! Meat on meat!  Alas, the description certainly oversold the burger. 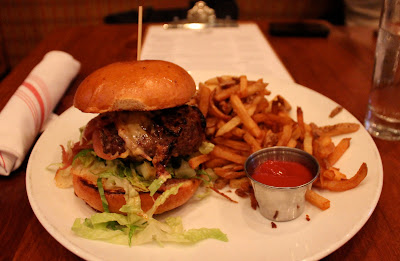 The first problem was the bun: a bit too big and bready.  We've been spoiled by many brioche burger buns, whose buttery texture retains lots of moisture and doesn't crumble.  Regular buns have a much dryer crumb and tend to fill up/dry out your mouth if you take a large bite. 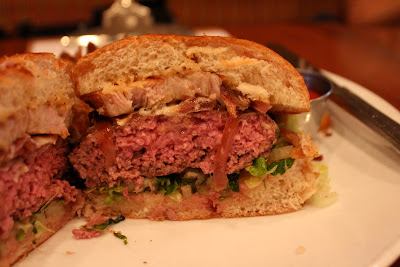 The meat itself was well-cooked but not particularly flavorful- again, we're just spoiled with great meat options in this city, a little ground brisket here, a little extra fat there.  A small square of pork belly didn't cover the entire patty, and was a little bit dry and chewy.  Overall, the burger didn't fare well in Burger Club ratings, scoring just a 2.86/5 in the Taste category.

The second option on the menu is the Free Range PA Turkey Burger-- which, as noted on the menu, has by one source or another been named Best of Philly ($14).  This burger again has a stellar list of accompaniments: avocado, brie, curry dijon aioli, lettuce, and tomato.  We didn't try this burger but were able to snap some pics and get an opinion or two.  Our resident non-meat-eater (breaking the rule for burger tasting only!) claimed it was very salty, overpowering the toppings. 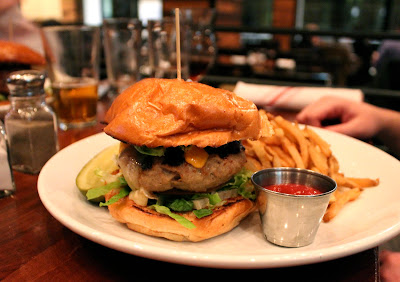 I truly believe we would have left as a group of happier eaters if everyone had ordered the third and final option: the Lamb Burger ($15).  The novelty of a lamb patty helped make the meat super flavorful, with a good char and a soft pink center.  The bun had sesame seeds, lending flavor to the mix even though it was still a bit too big and dry. 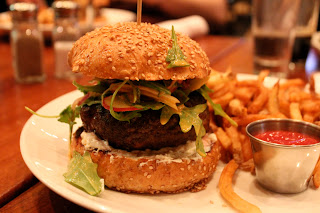 The toppings were a wonderful mix-- actually proving the opposite effect as the other two burgers, as they were executed in a way that made them even better than on paper.  Fennel salad (with radishes and arugula), smoked paprika aioli, kalamata olives, and feta yogurt- lots of Mediterranean flavors that provided much needed moisture (to counter that bun), coolness, and a good mix of textures. 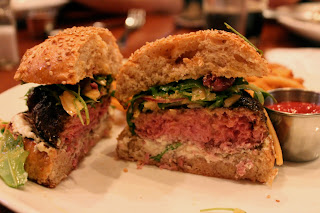 I would absolutely revisit Tap House just for this burger- it was wonderful.  The side of fries was also just fine- hot and crispy, and a generous portion.  Our first meeting of 2013 may not have found us the best burger in the city, but it was absolutely a success-- tons of new faces, a fun spot, and an unexpectedly great lamb sandwich.  And, the great thing about Burger Club, you always know another meeting is just around the corner!
Posted by A and J at 8:35 PM