If you're a long time reader, you'll know that we're iffy about Center City Restaurant Week.  If you're a long time Philadelphian, you may be as well.  However, if you're up for eating a multi-course meal and are OK with spending $35 per person for a meal (hard not to, these days), then sometimes you can seek out the few really good deals that exist.  For the past several months, we've been looking to spend a Garces Group gift card we received as a wedding gift, and I figured a birthday dinner was worthy of its use.  However, getting a reservation on a Friday during Restaurant Week was near impossible- I even called to be added to a "waiting list," but stalking OpenTable daily turned up a prime reservation.

A Peruvian-Cantonese fusion restaurant, Chifa is one of Garces' more exotic restaurants.  It's interior is rather sexy, with seating options giving diners a bit of privacy with the use of curtains and booths.  Our waiter was very knowledgeable and friendly- Restaurant Week can be a headache for restaurant employees but thankfully we were treated well.

The prix fixe menu gives a variety of options for both the first and second courses- from which you choose two options each.  The obvious choices jumped out at us immediately- starting with the Pork Belly Bao Buns ($9 on the real life menu).  We've actually tried these before, during a Garces Progressive Dinner, and knew we needed them again.  Fluffy, chewy bun, sweet and salty glazed pork belly, and pickled accoutrements- it's an auto order. 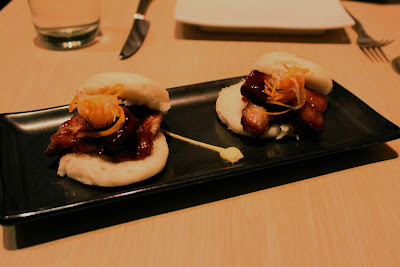 The Spring Roll ($8) was my main disappointment of the night.  A single roll was cut into four small bites, making it a bit less messy to eat.  However, the wrapper wasn't fried well, and it lacked the crunch I was expecting.  The smoked shrimp filling was overwhelmed by the breaded, soggy wrapper. 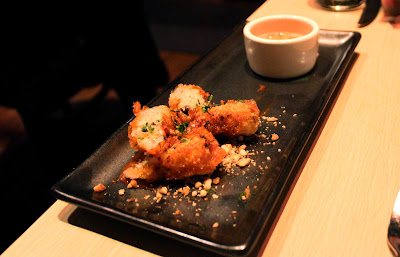 Thankfully the following two dishes in our first course were stellar.  The Duck Tacos ($9) were generously portioned on two small flour tortillas.  A pile of braised duck meat was mixed with housemade kimchi, and with an avocado based dressing and some crunchy sliced radishes it was a quite a mix of flavors and textures.  I do think it's a bit of a "safe" dish, as were most of the Restaurant Week options, but still with plenty of pizazz. 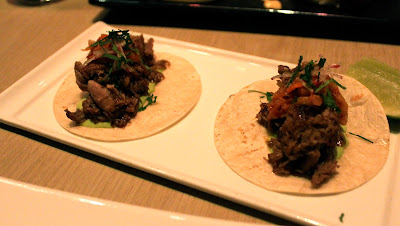 On the safe scale, I'm not sure where ceviche fits-- it's never been my favorite seafood preparation, and "raw" fish may not appeal to the masses.  However, the highlight of my meal was certainly the Peruvian Ceviche.  The name applies to the ingredients involved in the sauce, not to the actual fish- the type of seafood may vary from night to night.  However, the Peruvian will always see you a "leche de tigre" or tiger's milk, a common name for the mix of lime juice, garlic, onion, chilis, sweet potato, mote (hominy-like) and cilantro that make up a classic ceviche from this region.  The fish of the night was salmon and was incredibly smooth and velvety.  The punch of lime, garlic, and cilantro with a kick of heat kept the dish bright- it would make a perfect summer snack. 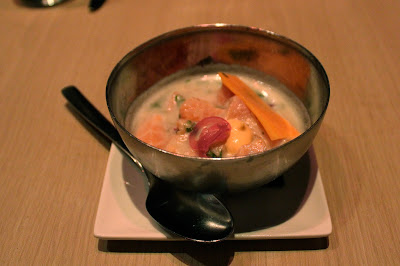 On the other hand, the epitome of safe is a bowl of mussels ($10).  Our first dish of the second course still provided plenty of fun flavor, with a Thai-style twist of coconut milk, lemongrass, and Thai basil.  I'm not sure how Thai food fits into the landscape of typical "chifa" (the name for Chinese cooking in Peru), but I'm certainly glad it does.  The spicy broth would also make a phenomenal soup on its own. 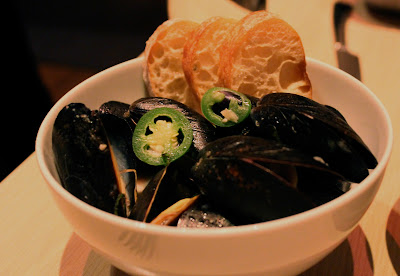 I will literally jump at the chance to eat anything labeled as a tamale, so had no problems deciding on the Humita ($12, listed as a "vegetable" on the regular menu).  A filling choice for vegetarians (minus the bacon), a square of dense masa cake filled my tamale quota, and brought another style of cooking into the mix.  Woodsy mushrooms, charred corn and bacon in a creamed corn sauce made this decidedly comforting. 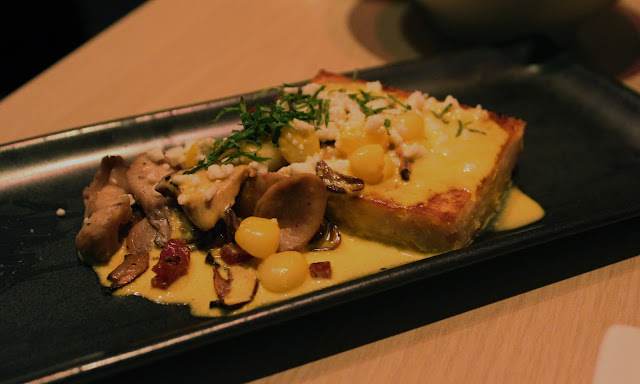 The "chaufa" regained footing as a solid Chinese style dish, but with essential Peruvian ingredients.  At its core- simply shrimp fried rice- the addition of bits of chorizo and sweetness from mango puree combined into more than just a bowl of rice ($10).  No chintzing on the Restaurant Week portion either- tons of large shrimp were found deep in the bowl. 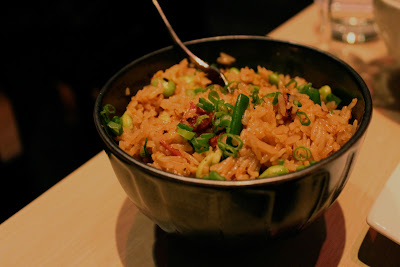 My final savory dish was the Vegetarian Curry, another rice based dish with a heavy, thick coconut based sauce (typically $15 with the addition of crab on the regular menu).  The waiter warned me that it would be spicy, and he was right- I love as much heat as I can take, and this definitely pushed my limits.  However, after four or five bites the flavors became somewhat one-note, and the heaviness of the curry sauce became a bit overwhelming.  A bit more rice and a little less sauce would have made it slightly better balanced. 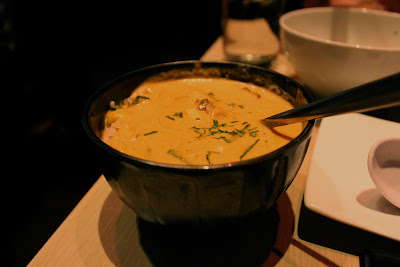 There were two dessert options, leaving it obvious for us to choose both.  As my husband doesn't like coconut and can't eat ice cream, the Bien Me Sabe was my designated choice ($8).  A square of coconut cake reminded me of a drier, fluffier tres leches- evaporated milk must have been one of the components.  A tiny scoop of guava ice cream melted into the cake like a cold sauce, giving each bite just a bit of fruitiness. 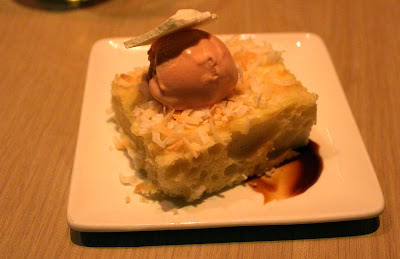 The Suspiro (translated to "sigh" in English-- an interesting name?) was also fruity, keeping both dessert options light and bright ($8).  A lemon custard is topped with meringue and toasted to perfection- creating a thin crust and a bit of crunch.  Two alfajores, a thin, crispy traditional cookie eaten in a number of Spanish-speaking nations, accompanied the custard. 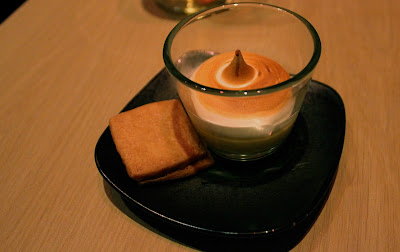 At the end of the meal, I was more than satisfied- a potential downside to enjoying a Restaurant Week meal, as it's necessary to enjoy multiple courses (oh, darn!).  I loved the ability to navigate through so much of Chifa's regular menu- clearly they can't afford to put the larger, more expensive dishes on the prix fixe, but I doubt I would even order them on a regular visit.  Tallying up our meal, it's clear that if purchasing all of these items on a normal night, we would have easily spent $100, leaving us with some obvious savings (the gift card helped immensely as well!).  It's hard to say which of Garces' spots is my favorite, but Chifa has become a real contender.