Even though we loved our experience at Horizons, Philadelphia's former premiere vegan eatery, we've been slow to make our way to Vedge, the reincarnation restaurant by chefs/owners Richard Landau and Kate Jacoby.  It's always received excellent press but 1) it can be pricy, particularly considering the ingredients and 2) it's near impossible to score a reservation at prime time.  We called three weeks in advance of our birthday and were unable to get in.  Thankfully, they hold a few seats near the bar for walk-ins, so our plan was to arrive at opening to ensure a spot.  However, I continued to stalk OpenTable, and was able to snag a last minute reservation (thanks to whoever cancelled!). 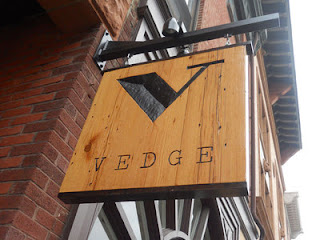 I naively thought that since it is so hard to get in, it must be a tiny place.  Plus, it's tucked away in a brownstone on Locust Street- it has to be small!  Not the case- there are multiple dining rooms within the restaurant, each larger than the next as you move from the front to the back.  However, it's still relatively small in terms of seats- each table has sufficient space to carry on a conversation without breathing down their neighbors neck.  It's almost novel, really.

The menu comes in two parts: the regular menu, with a number of appetizers and "entrees" (really just slightly larger plates), and the "Dirt List," an ever changing menu of seasonal vegetables fresh from the farm (or maybe greenhouse at this time of year?). 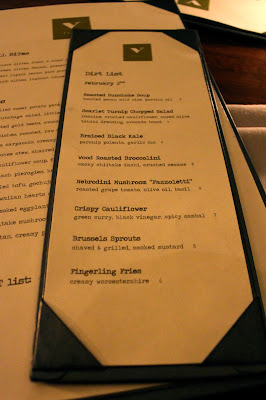 One negative aspect of Vedge we've heard time and again is that diners often leave hungry.  When the main focus is the vegetable, and not a vegetarian protein or fat source, we can see how this may happen.  But, we think if you order smart, you can eat a solid meal without ordering fourteen dishes apiece. 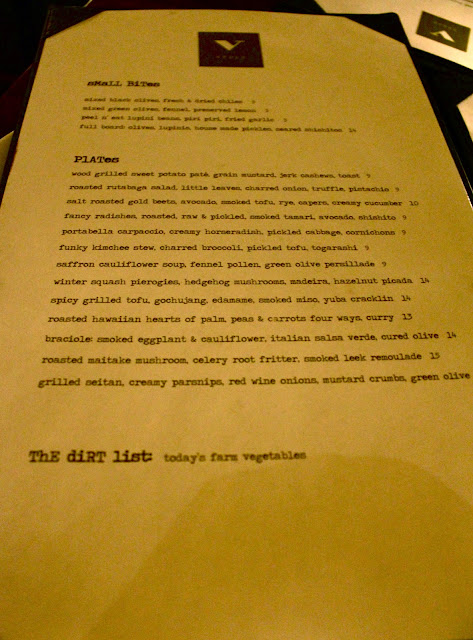 We each selected three items, a mix of dirt list and regular eats.  Each plate is small, but shareable among two- if you're part of a larger group, you may consider ordering multiples.  Our meal started with a lovely "stack" of salt-roasted golden beets, avocado, and smoked tofu, topped with two dainty triangles of rye bread and served with a creamy cucumber-dill sauce ($10).  The number of creamy dishes is impressive considering there's not a drop of dairy in the house.  We chose this dish because it consists of so many of our favorite ingredients and flavors, and it was even better than we imagined- incredibly fresh and flavorful, with a good mix of interesting and familiar. 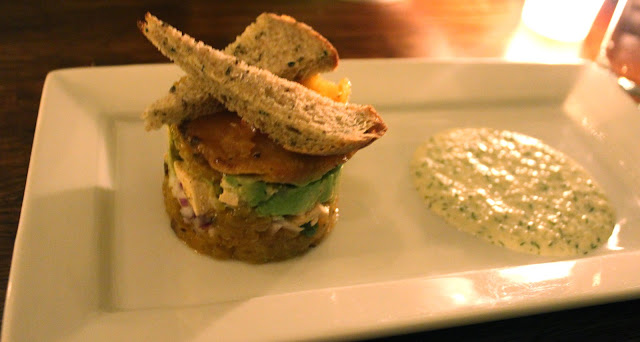 The room we were seated in contained a fireplace and a large cozy seating area where a large group was gathered- not a "real" table, but fine for snacks and drinks.  Our two-top was tucked into the corner giving us a great view of the front room and plenty of privacy.  The space really is beautiful- well kept and decorated with sparse but well chosen pieces, including this awesome chandelier of spoons.  I'd also like to take a moment to praise our server- she was the epitome of efficiency and grace, and provided the best service we can remember in recent months. 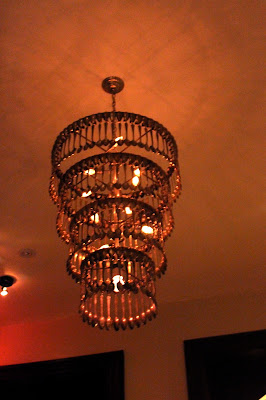 Our second dish was a vegetarian riff of one of J's favorites- pate.  Vedge's version is made with grilled sweet potatoes, blended into impossible smoothness and thick enough to require a knife to spread ($9).  Small, perfectly formed lines of whole grain mustard and chopped cashews roasted in jerk spices added additional vinegar and spice elements to the small toasts.  The sweet potatoes had a peculiar flavor very similar to... meat.  The kitchen does wonders with a smoker, infusing a rich flavor without the need for a single animal. 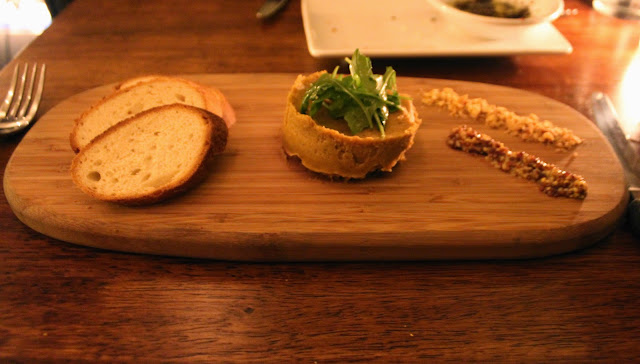 Weirdly, one of our favorite dishes was one of the most simple- the "Fingerling Fries" off of the Dirt List ($6).  I'm still trying to figure these little guys out- they were almost like fat potato patty bricks (in a good way.. that doesn't sound all that appealing).  The potatoes were carefully crushed at some point in the cooking process (boiling/roasting/frying/all of the above?), leaving smooth ovals that perfectly retained their shape.  They were then tossed in a "creamy worcestershire," an amazingly tangy, bright sauce that I wanted to lick off of the plate.  The serving was generous, which may have been the answer to filling up- lots of carbs! 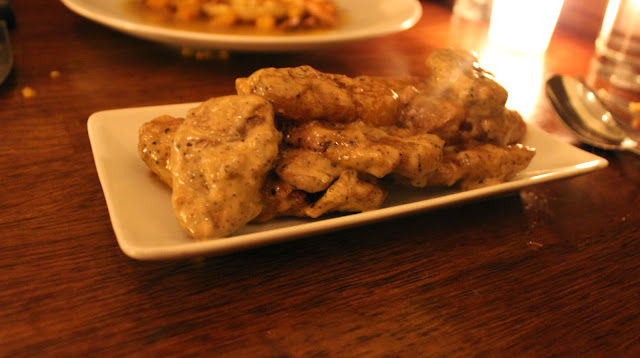 While Vedge clearly can make a simple potato dish the highlight of our birthday dinner, the chefs also have quite an eye for creativity.  The "Funky Kimchee Stew" stood out to us as an ideal rendition of a dish that utilizes exotic flavors and cooking techniques to produce something that no (adventurous) carnivore could deny ($9).  Maybe it's just the spice-lover in me, but the combination of the pickled cabbage and a good dose of hot togorashi mixed with a warm, comforting broth and tons of fresh vegetables is my ticket to happiness. 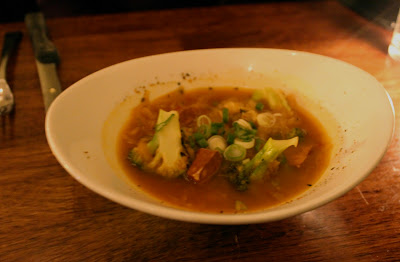 Our "soup course" was well-balanced by the arrival of our salad (or maybe it was the other way around...).  The Scarlet Turnip Chopped Salad was a Dirt List item of the day, and while it was plenty refreshing while remaining flavorful, was our least favorite of the night- but hey, it is just a salad ($9).  Vedge kicks it up a notch by mixing chopped romaine, turnip "croutons," cauliflower bits, and an olive-tahini dressing, served with a chunk of toasted bread topped with a bit of avocado.  In any case, I definitely want the recipe for that dressing. 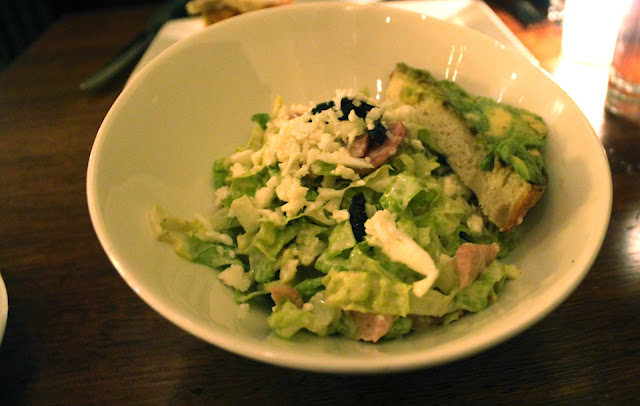 Our "big splurge" of the night was an order of the Winter Squash Pierogies, slightly heartier and thus one of the more expensive item on the menu ($14).  Some wonderfully prepared maitake mushrooms and firm winter squash were cooked with madeira to add a touch of richness.  The pierogie dough was some of the best we've had- doughy with a slight chew, but crisp on the edges.  A "crust" formed from finely chopped toasted hazelnuts provided a crunch that rounded out each bite. 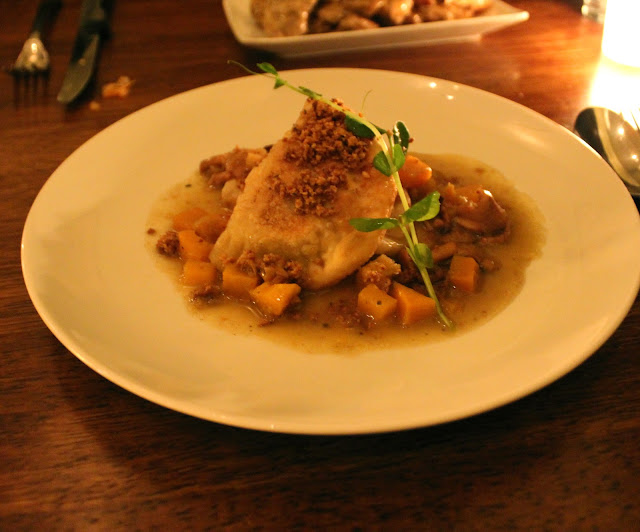 We honestly would have been perfectly content to call it a night, soaking in our last few moments by the warm fireplace before heading out into the snow.  However, Kate Jacoby is well-known for her vegan dessert masterpieces, and we felt obligated to sample her wares.  Her menu doesn't change often, which is just as well, since each choice has been carefully curated.  The Chocolate Uber Chunk is perhaps one of the most popular, and comes in a very visually appealing form- the rule of three, right?

The multi-layered dessert-in-a-jar (reminds us of our beloved budino from Barbuzzo) starts with a peanut-pretzel base, a salty, crunchy bottom layer that is a sturdy bed for a creamy malt custard.  A layer of vegan whipped cream completes the stack, while a tiny scoop of stout ice cream served as a slightly bitter complement. 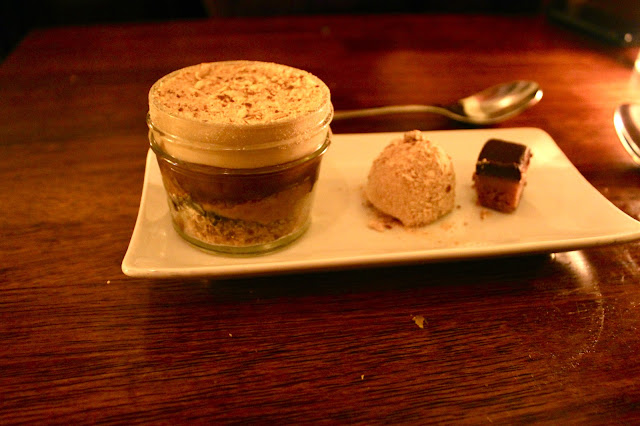 We're clearly a bit head-over-heels for this restaurant, recently ranked #3 in the city by Philadelphia Magazine (though we never forget a few grains of salt while reading these types of ratings).  Vegetarians and vegans are clearly delighted to have an upscale restaurant in which nothing is off limits, and while I would never take a true meat-and-potatoes man here, it's clearly got much appeal for food lovers of all kinds.  The atmosphere is nothing short of adorable, and works for dates, small groups of friends, and even business affairs.  Landau, Jacoby & Co. have a great thing going and it shows- if you're wanting to check it out, better make that reservation at least a month in advance.