Sometimes we get really excited about a restaurant, and it lets us down. As much as I hate to admit it, Loco Pez falls in that category.  The hipster-y cash-only Mexi-bar with an eternal wait somehow has an incredibly loyal following, but we just don't get the hype.  Arriving just after 6 on a Thursday means 45 minutes for a table for two.  Thankfully the new Cedar Point Bar & Kitchen right across the street offered a quiet spot to take the edge off our appetite with some tasty cornmeal-battered fried pickles.

The menu is pretty straightforward- a variety of meat options available in taco, enchilada, burrito, or quesadilla form.  A few basic apps and sides, a short "cowboy menu" (think burgers and hot dogs) and you're done.  With our preview meal at COOK delivering some stellar tacos, that was the primary focus of the evening. 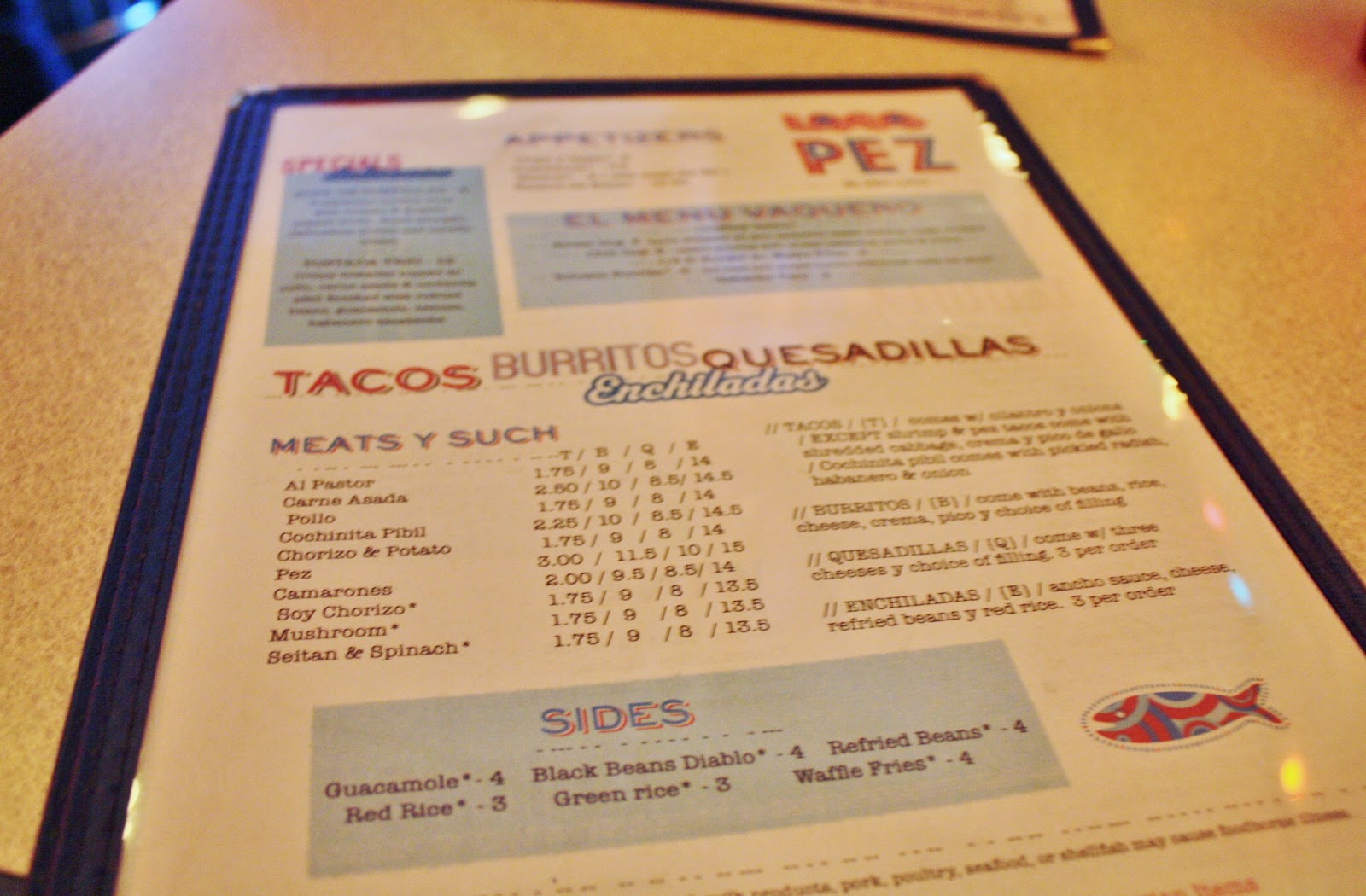 However, we made a detour at the beginning to check out the tortilla soup ($4).  The masterpiece of a bowl of food that we had at La Calaca Feliz had me hankering for more, but Loco Pez dropped the ball.  The descriptions of the two soups are almost interchangeable, but the Loco Pez version seemed incredibly watery and underseasoned.  After we fished out the few soggy tortilla strips and pieces of avocado, the bland broth got pushed to the side. 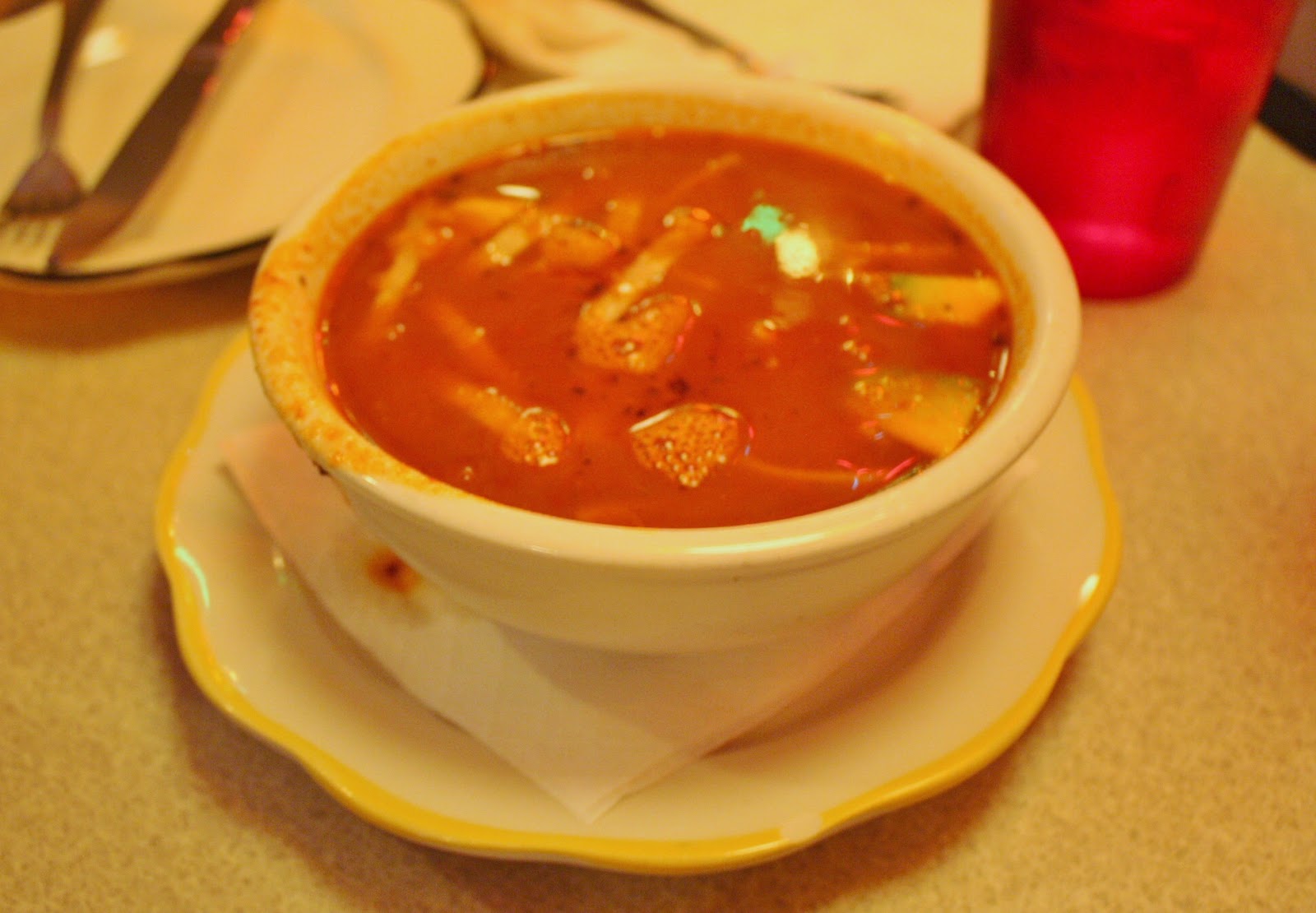 We somehow narrowed down the meat choices to five- oddly enough, the first five going down the list.  Served on single-layered corn tortillas that held up well to their offerings, the tacos had a good ratio of tortilla to meat.  Each was garnished with fresh cilantro and a sprinkle of chopped raw onion, and we had the option to add a squeeze of lime juice and a few slices of radish.  I'm more of a taco purist- the meat should speak for itself.  Unfortunately, the two pork options were pretty bland- the al pastor ($1.75) and the cochinita pibil ($2.25) tasted like dry slow-cooker pulled pork without the spices or sauces. The pineapple on the al pastor was a thoughtful addition, but they both definitely needed the upgrade of the lime juice acidity.  A little hot sauce helped too. 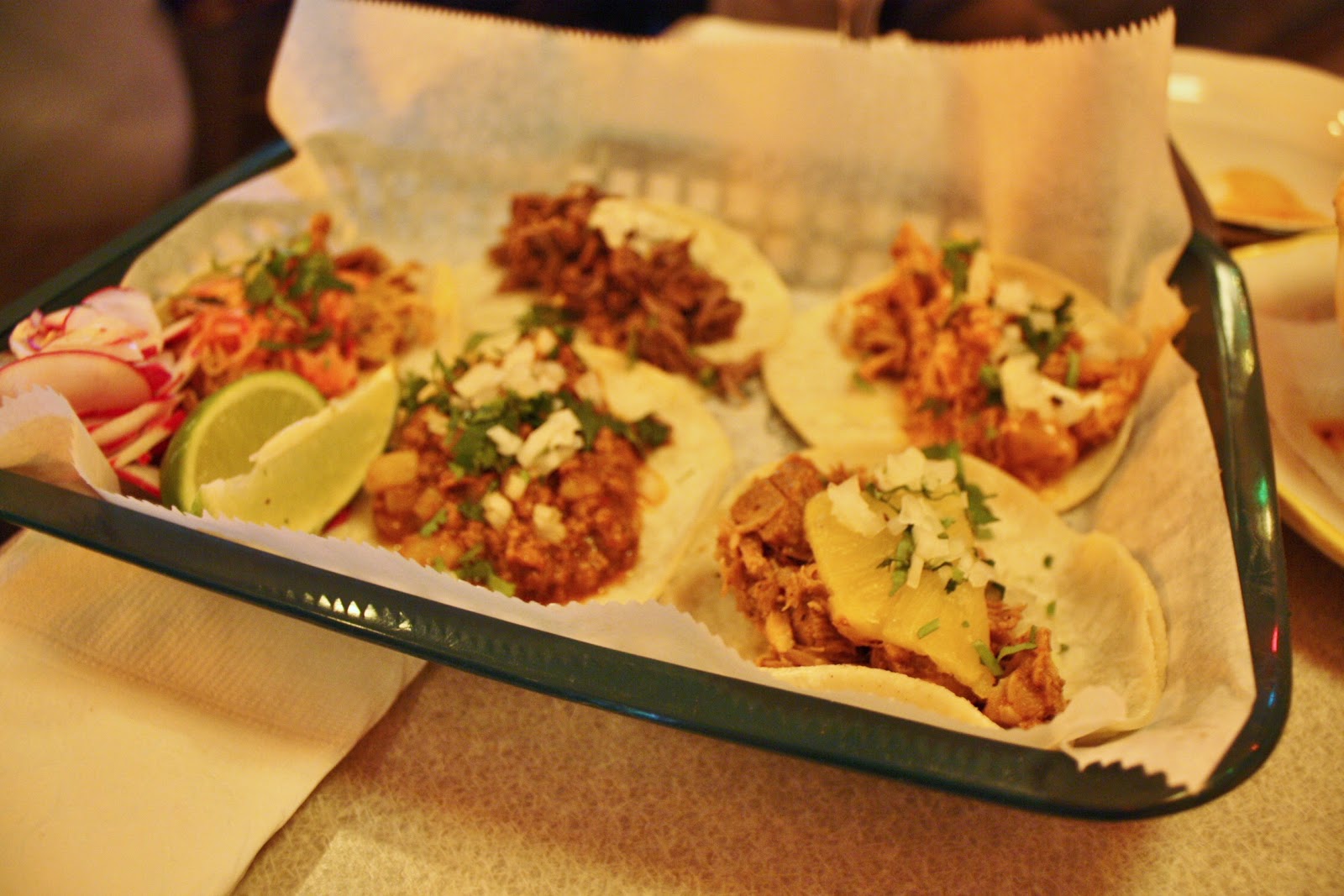 The pollo taco ($1.75) surprisingly had more flavor than the pork- I'm assuming they use a mix of dark and white meat chicken for a boost in fat and flavor.  Big chunks of meat are soaked in a light tomato-y broth- juicy and well-cooked.  A good taco for the less adventurous palate.  The carne asada ($2.50) unfortunately went the way of the pork- dry, underseasoned shreds of meat.  The chorizo and potato ($1.75) was definitely the best bet, with a mix of textures and a bit of spice from the sausage. 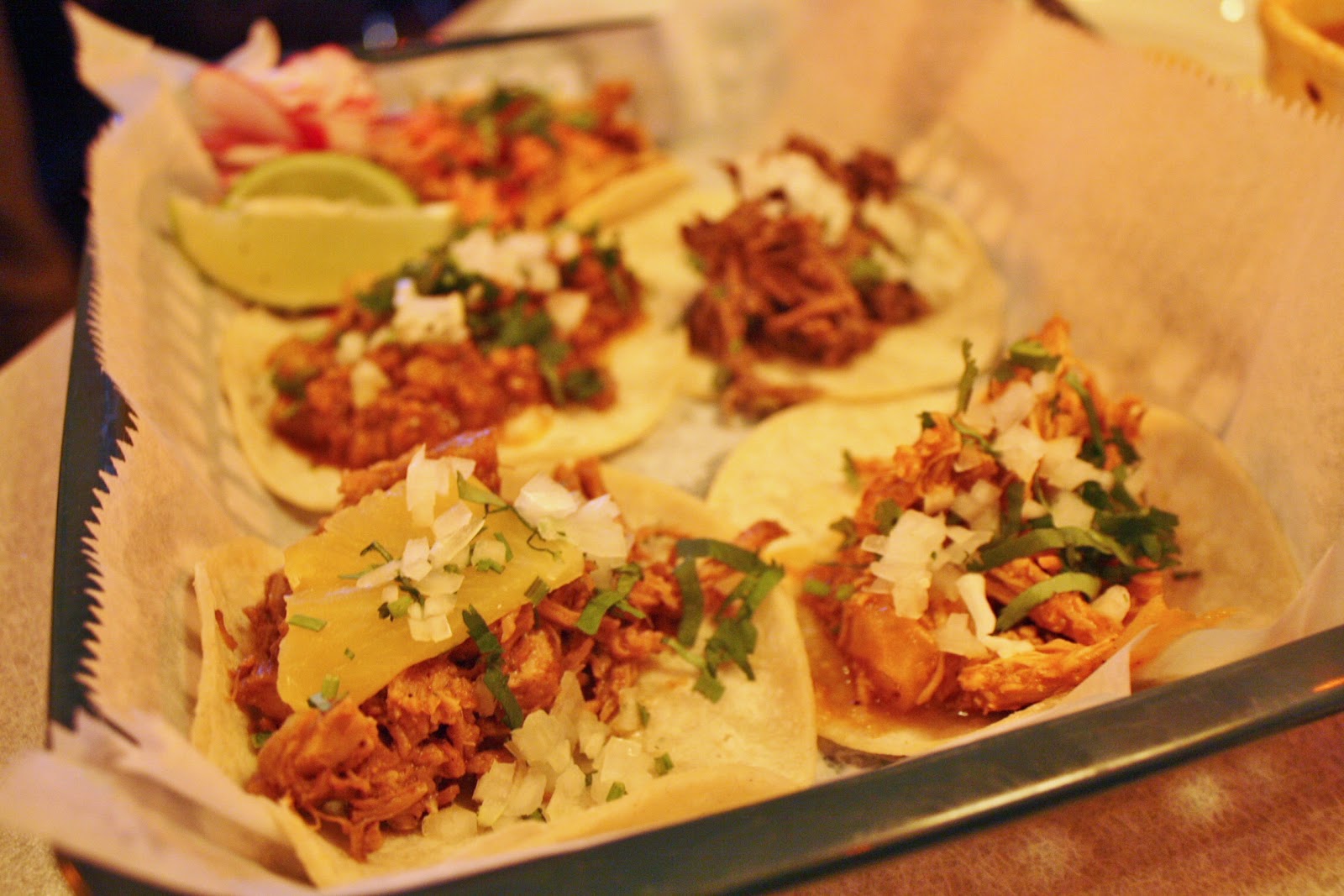 We ventured into non-mammal territory with an order of camarones enchiladas ($14).  Three soft flour tortillas are stuffed with chopped shrimp and coated with an ancho chile sauce, plenty of cheese, and some chopped scallions. A mild salsa and a healthy serving of refried beans and rice rounded out the dish, making the higher price tag well worth it.  Based on what I remember about the fried fish tacos at COOK, seafood is significantly tastier than meat here at Loco Pez. 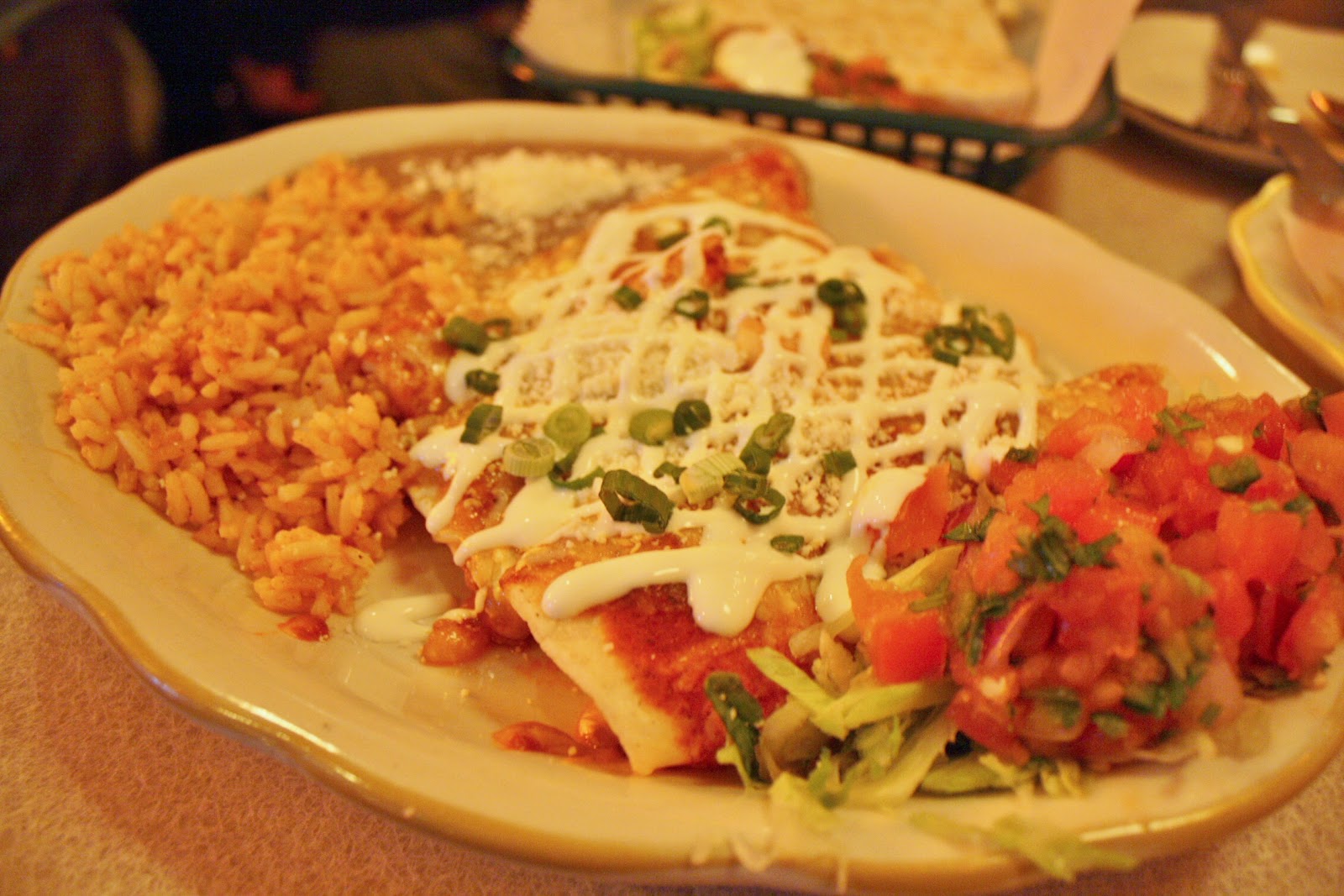 To confirm this realization, an order of three cochinita pibil "quesadillas" ($8.50) brought us back to Boringville.  Shredded meat and a little bit of melted cheese (too flavorless to discern what kind it was) folded into an overly crisped tortilla does not a quesadilla make.  It was more like another taco, just in a larger wrapper.  The whole thing was just so dry... Apparently I like my quesadillas steamed closed because there were just too many crunchy tortilla edges here. 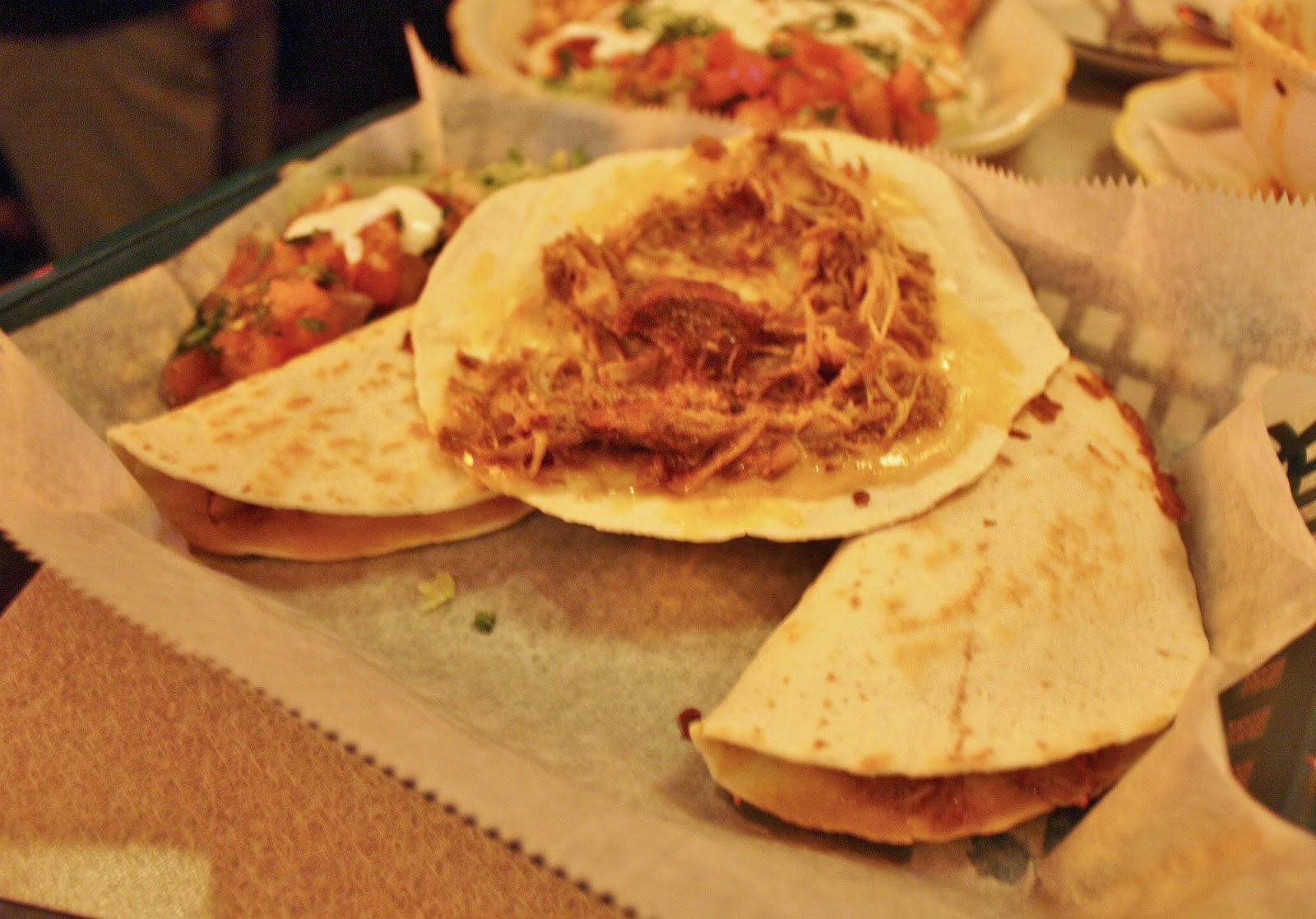 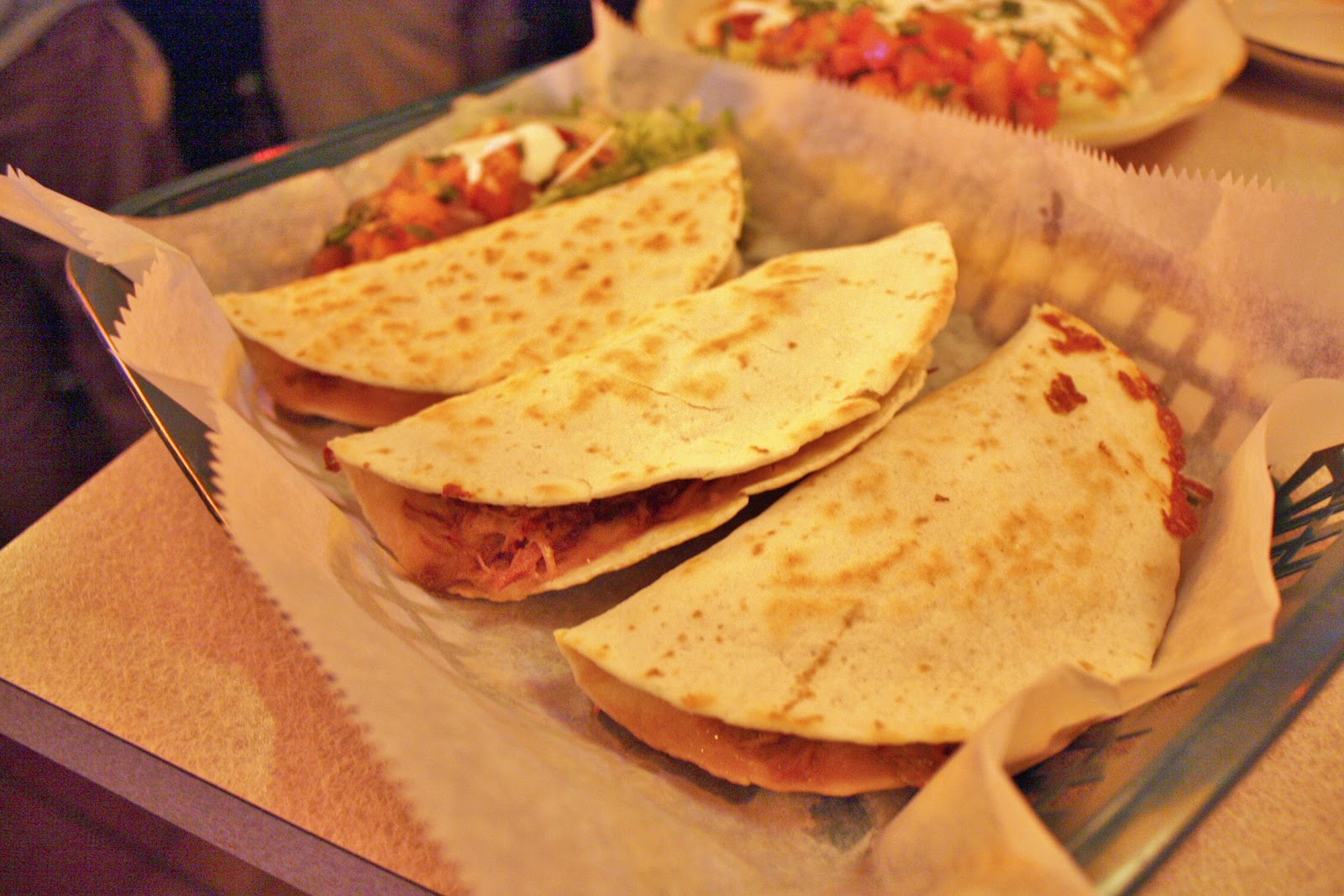 I wish I had better things to say about Loco Pez but between the wait, the subpar food, and the annoying cash only element (especially for a place with a liquor license?)... we probably won't be returning.  However, after our quick visit to Cedar Point with it's spacious feel, incredibly friendly staff, and of course fried pickles...we'll be back in the neighborhood soon.