The burgeoning food truck population in Philly is bringing us better and better food-- the more trucks, the more competition, and this promotes both creativity and quality.  However, they seem to be scattered throughout the city, and oftentimes are only open during lunchtime hours.  That means for those of us with day jobs, we're limited in the trucks with which we have access-- it's a sad predicament.

Thankfully, the great people at Manayunk Development Corporation must have realized this First World Problem, and solved it (if just for one day at a time) with the Manayunk StrEAT Food Festival.  Over THIRTY trucks were invited to take part, and lined up along Manayunk's beautiful Main Street, in addition to plenty of other attractions: gourmet food vendors (who don't have trucks but still want to feed the masses!), restaurant specials at a dozen brick-and-mortar places to eat along the way, tons of specials in shops and retailers, and live music and entertainment.  All of that, combined with a beautiful sunny Saturday afternoon and it's a winning combination.  Somewhat unfortunately for us, it wasn't a secret, and visitors and residents came out in the hundreds.

The Development Office was super generous and offered us press passes to the event-- which got us free samples at trucks (not ALL of them, but most of them!).  Next time, we want the ability to go to the front of the line, mmmkay?  JUST kidding-- but the lines/crowds were definitely the only downside to the day.  The trucks were parked along the sidewalk, offering limited space to stand in line, and made squeezing past the mob around each truck difficult (dear parents of little ones: no double wide strollers at a street fair!).  Thankfully, even with the huge crowd, we only waited 10-15 minutes at each truck.

First up: Mac Mart, a mac-n-cheese truck (**not Say Cheese, as we originally reported- they make grilled cheese, also ingenious).  Yep, brilliant idea.  I ordered the chicken BBQ mac, which comes with chunks of chicken marinated in a barbecue sauce, drizzled with more sauce and topped with bread crumbs.  The best part was definitely the creamy mac underneath-- not clumpy or overly cheesy, but just right.  Deceptively large portion as well! 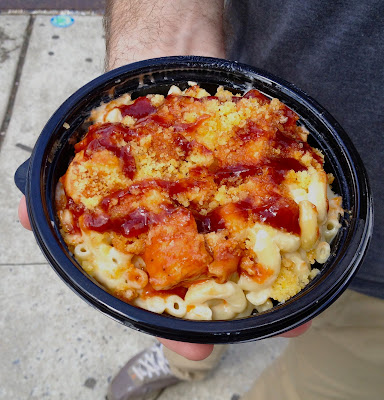 Lil Dan's was the next in line, and they were (thankfully!) making tiny sandwiches for those getting press samples, instead of serving an entire portion.  I needed to maximize stomach space, and the six bite sandwich was perfect to sample.  I ordered the "Bella," with balsamic glazed chicken, broccoli rabe, provolone, and roasted red peppers.  A classic Italian combination with all the right flavors, and a perfectly soft Amoroso roll to hold it all together.  Mindblowing?  No.  But I could eat this for lunch daily and be a happy camper. 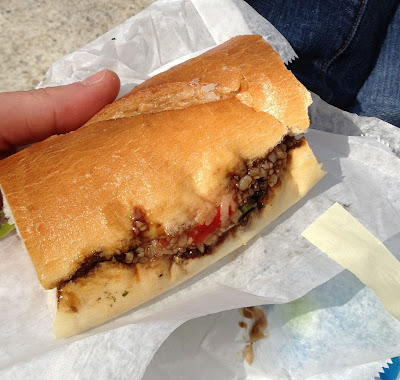 Moving down the street, we stopped at Delicia's, a truck that is actually located close to my Penn place of employment.  Their specialty: arepas.  Let me just stop to comment that I automatically love anything made with corn.  Therefore, an arepa is kind of my dream food: a little pita like pocket made out of chewy masa dough.  The one I chose was stuffed with "chicken salad"-- shredded chicken mixed with avocado and subtle seasonings.  I topped it with some hot sauce to give it a little extra flair but it really didn't need it-- the simple ingredients were still incredibly satisfying.  The fluffy corn pocket was definitely my favorite part, although not super flavorful on its own.  The bad thing about how much I liked this?  I ate the majority of it, leaving me stuffed and unable to venture on to more trucks! 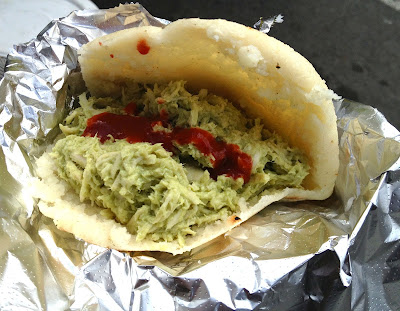 I brought my husband as a fellow food taster and he stopped at Local 215, a truck I've heard little about but that offered interesting options, including pork belly buns.  Not your traditional bao bun, but instead a fluffy, slightly sweet bread-y bun stuffed with marinated and grilled pork belly and sweet pickled radishes and cucumbers.  Pretty expensive compared to other trucks, especially for the smaller portion (I think it was $8). 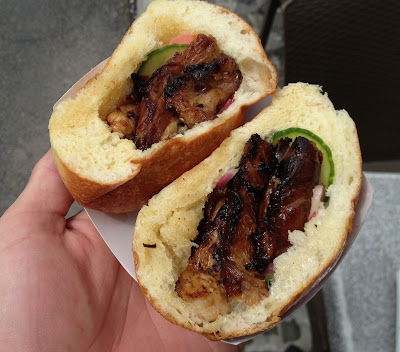 Even though I had trouble continuing on, I ended up sampling an ice cream sandwich from Little Baby's Ice Cream, which absolutely rocked my world.  I was hesitant to pay when so many trucks were giving away free samples, but it was worth the $5 I handed over for the almond-fennel cookies sandwiching the coffee toffee ice cream (weird combination, but ridiculously good).  My dairy-averse husband stopped at Sweet Box for a red velvet cupcake-- they suggested waiting for it to warm a bit before eating, but there was no stopping him.  Dense and not overly sweet, it's a perfect dessert for a food truck to carry. 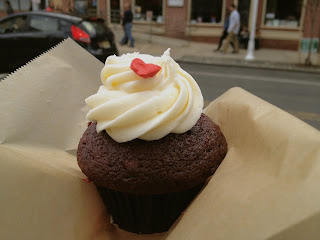 The Manayunk office is planning to host another of these festivals in the fall, and we're hoping to attend again!  They are even contemplating closing down Main Street to traffic to give attendees more room to  enjoy themselves-- and maybe room for more trucks as well!
Posted by A and J at 2:45 PM