Just one day after our incredible brunch at Lacroix, we once again put on our "all-you-can-eat" hats. Distrito recently began a fantastic deal in their downstairs "Cantina," featuring unlimited tacos and enchiladas ($25) coinciding with Monday Night Football games. We're not really into the NFL, but we are definitely into Distrito tacos. A group was organized, and we met just prior to the 8 PM start time in order to snag seats. The deal is limited to the Cantina, which you can't make reservations for, so we recommend you get there early to get a spot, especially if you have a larger group. 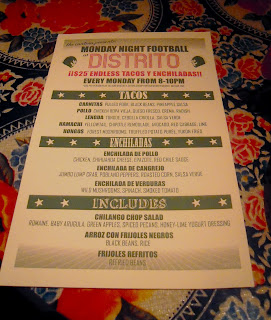 The whole table must be in on the deal-- no problem there-- and you are allowed to order two items on the first go round, and one item with each consecutive request. The deal also comes with some sides, which we used to whet our appetites as we waited for our first orders to come out. The Chilango Chop Salad was a good start; some fresh veggies to begin a long night of chowing down. It is one of Distrito's signature salads, and comes with assorted greens, apple slivers, delicious spiced toasted pecans, and chewy cheese cubes (along the lines of queso fresco, or a really mild mozzarella), all tossed in a light yogurt-based dressing and topped with crunchy tortilla strips. I really could have made a meal of this salad alone-- which may be what Garces is aiming for by providing it prior to the taco-fest. 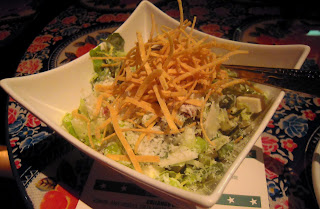 The two other sides are bean based, and while good, were somewhat random in my opinion. Salty, creamy refried beans were very yum, but on their own? I typically don't eat refried beans by themselves. I ended up using it as a little topping to some of my tacos later on, just so I could enjoy them, but a more "stand alone" side such as the rice and beans makes more sense. Also-- two bean dishes? Why? I'm not complaining, I definitely did NOT need anything other than the tacos, but the choice is somewhat baffling. 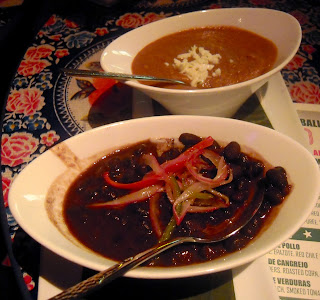 Our first taco/enchilada order took the longest to come out of the kitchen-- we were getting a little nervous that our precious two hour time slot was ticking away while the chefs took their time. However, once the food started flowing, it never really stopped (we actually didn't even make it to 10). J and I were determined to try each and every option on the menu between the two of us, and we were ultimately successful-- minus a single dish, which I sampled from another dining mate's plate and she missed out on.

I started with the crab enchilada, thinking the sweet crabmeat filling was probably the most "worth it" item on the menu. Honestly though, the other ingredients of this dish overwhelmed the crab. Good crabmeat has little flavor of its own, requiring accompaniments to highlight it, not cover it completely. Thankfully, the construction and flavors independently top-notch- a mildly spicy salsa verde encasing the little roll of crabmeat and corn salsa, topped with fresh chopped poblanos. All of the enchiladas come as a single serving, in a little cast iron pan. These pans, besides being adorable, serve to keep the food hot long after it comes out of the oven.

Moving along in non-chronological order, J ordered both the chicken and the vegetarian enchiladas. The chicken enchilada and chicken taco (unpictured) were fairly similar- shredded chicken bathed in a red chile sauce, brighter and hotter than the salsa verde. A much better flavor match than the crab, but sort of.. unoriginal. It tasted to me like a solid form of tortilla soup- which I'm not overly fond of. The vegetarian enchilada, on the other hand, was excellent- sauteed mushrooms and a good pile of soft spinach combined with a smoked tomato sauce- exactly like something I would love to make at home (but about ten times saltier-- whew!). 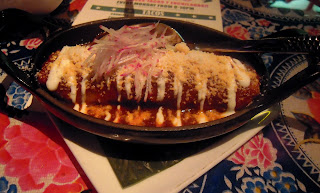 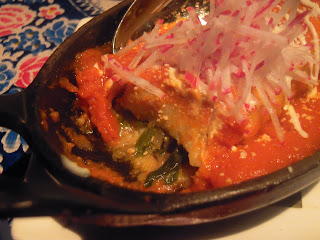 We also tried all five version of the tacos; Pulled Pork (Carnitas), Pulled Chicken (Pollo Ropa Vieja; mentioned above), Tongue (Lengua), Fried Fish (Hamachi), and Vegetarian Mushroom (Hongos). All of these tacos brought very original tastes to the table (minus that chicken...), and are served as two mini tacos (about 2-3 bites each) per plate. Perfect portioning for the all-you-can-eat format, but a little measly if you ordered them on their own. The Hamachi tacos were sort of disappointing- the fish was heavily battered and fried to a crisp, preventing me from enjoying the yellowtail to its full potential. It also could have used moister accompaniments, since the fried-ness sucked out the moisture of the fish. I know this might sound overly critical, but as I've had these tacos at Distrito in the past, they've seen better days. 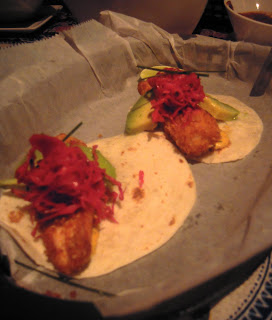 J's favorite of the night was the tongue taco- a little different from what you normally expect in taco fillings, but we like trying new things. The tongue tastes like tender beef, and with soft onions and peppers and tortilla all together, it reminded of a classic fajita. My favorite was the mushroom tacos-- which for some reason, the rest of the party seemed to shy away from. Sauteed mushrooms are tossed with a truffle oil and potato puree, and then topped with crispy potato sticks. The whole combination is admittedly quite greasy, but completely worth it- it tasted like a big crispy, crunchy, truffle flavored potato chip. After trying each of the options, I seriously considered ordering another round of these, but eventually decided my stomach just couldn't handle another bite. 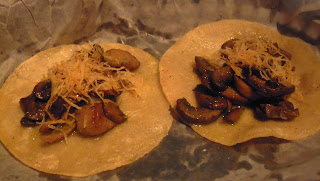 As the meal went on, food started coming out at a furious pace- even when we were all slowing down. The waitress was awesome at keeping up with our continuous flow of orders, but the servers weren't quite as competent-- they would basically walk around the dining room with baskets of tacos asking "Hamachi? Carnitas?" until someone claimed their order. This resulted in a contradictory issue- on one hand, you could easily claim food that wasn't yours, and on the other, someone else could claim your food. Particularly with a big group, with everyone ordering similar items, it got a bit confusing at times. However, we tried to keep pace; at one point, J had two taco baskets on the table and when another dish was delivered, moved one to her lap. Our waitress found this hilarious and in jest exclaimed, "MUST EAT MORE TACOS!" Well, yes.. that was our exact plan, thanks! 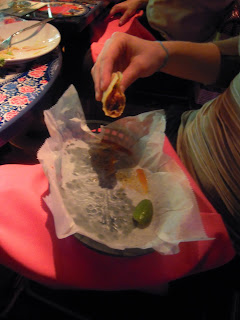 We all walked away from the table absolutely stuffed, and spent a good while commenting that we would have been fine, but that "Those last __ number of tacos weren't such a good idea!" It's a great way to experience Distrito in a casual, over-indulgent way, and tons of fun with a larger group. In other news, I have NO idea what football teams were playing and which team won that night. It's really not a great place to catch a game-- only two or three smallish TVs-- but we couldn't have cared less!