The baseball post-season is here, and that can only mean one thing here in Philly: baseball fever. Philadelphia is known as a sports-obsessed city, but in the past few years it seems it has reached an all-time high (probably related to the Phils winning the World Series). Finding a good place to watch the games can be difficult- most of the sports bars and restaurants are too small and crowded in Center City. However, we've found a good alternative spot in Northern Liberties that is certainly not a secret-- the Piazza at Schmidt's. The giant courtyard within the complex sports a huge projection screen, plenty of room to sit or mingle, and several delicious restaurants in arm's reach.

Our goal for game night was to hit the Piazza right as the Phillies took the field, grab some food at Swift Half and end up in the courtyard. The "little brother" of Good Dog in Center City, I was always a little skeptical of Swift Half (there was no way it could be as good!), but had a pleasantly surprising meal there over the summer. Unfortunately, when we arrived, the hostess informed us that there was basically zero chance of us scoring a table before the game was over.

So that is how we ended up at PYT- just across the Piazza, a little bit quieter (not definitively a sports bar, so baseball fans did not immediately flock to it)- and snagged one of the last tables. Good view of a TV, a menu we've been meaning to check out for quite some time.. Swift Half, we'll see you next time. 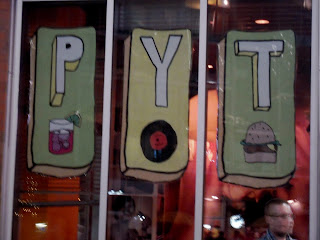 PYT (not really sure what it stands for.. apparently it is NOT Pretty Young Thing) is known primarily for their burgers, but also offers a number of other artery-clogging delicious items, mostly deep fried or sugar coated. No "sugar coating" of the nutritional content however-- they offer a ridiculous burger known as the "Fat Boy Monster."

The "burger of the week" option at PYT often has me salivating-- a different theme such as Thanksgiving, Texas BBQ, Chicken Cordon Bleu presented in burger form-- and I had to order the current special, the Korean BBQ Burger ($12). Described as an 8 oz. (holy huge!) beef patty made with short rib sauce, topped with kimchi, spicy Asian slaw and a special mayonnaise sauce, I couldn't turn it down. It was a good decision- definitely one of the best burgers I've ever had, even more so than the famed Village Whiskey burger. 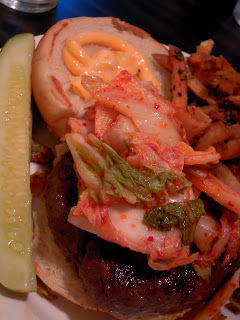 The flavors of this sandwich were authentic- I honestly could have been eating Korean BBQ. I'm not sure what "short rib sauce" is, but it turned that beef into soft, shredded short-rib as soon as it entered my mouth. It was extremely juicy (and more than a little greasy), but held together perfectly. The kimchi and the slaw were perfect accompaniments, adding a sweet-sour crunch to every bite without overwhelming the overall flavor of the meat. Oftentimes a good burger is ruined by a bad bun, but that wasn't the case here-- a giant seeded Martin's roll encased the contents without drying them out. It was really more of a burger container, a bit of a taste/texture afterthought. The sandwich was served with a side of fries, which are fresh and hand-cut (thumbs up), but then tossed with some sort of garlic-onion-herb mixture (thumbs down).

The other item on the menu that was calling my name was the Southern Fried Chicken Sammy ($9). Thankfully, J was thinking the same, and I was able to snag a few bites. A chicken breast was coated in a crumbly, corn meal crust, and then topped with bacon, lettuce, tomato, spicy mayo, and pickled green tomatoes. The chicken and its crust were the perfect "Southern-fried" texture, but something about the flavor was off. It needed.. something else? Thankfully, the rest of the ingredients stood up to the challenge, and all together on the bun, it was very enjoyable. The pickled tomatoes were particularly delicious- firm to the bite and tasted identical to the normal cucumber pickles served with both sandwiches. One note-- the pickles are spicy! A little surprising, but I was a fan. 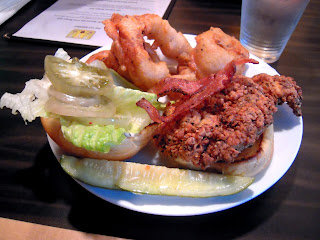 J switched out the side of potato chips (so boring) with a side of onion rings ($4). PYT used to list these as "Probably the Best Onion Rings You've Ever Had," but now has toned it down a little with simply "Famous Beer Battered Onion Rings." They may be famous, but they definitely aren't the best we've ever had. The onion to breading ratio is about 1:50, and the dough soaked up a monstrous amount of oil, making each bite a swim in the deep fryer. The flavor of the breading is also a little on the sweet side, reminding me of funnel cake. Onion rings are definitely supposed to be a savory item, so we were a little disappointed. 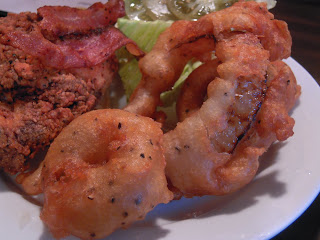 PYT also serves a variety of inventive milk shakes and desserts, but we had to draw the line somewhere. The Piazza was a great place to catch the game, so we are sure we'll head back to Northern Liberties again during the playoffs. Perhaps our next trip will see a successful trip to Swift Half and a stop at PYT for dessert afterwards. But for now: Go Phillies!