Finding good food in Philly isn't difficult-- I like to think we show you that on a regular basis. There are so many great places to grab a bite. But, it also has a few "creme de la creme" restaurants that are about six steps above anything you'd think about going to for a regular dinner out. One of these is just a hop, skip, and a jump across Rittenhouse Square from us- Lacroix at the Rittenhouse Hotel. 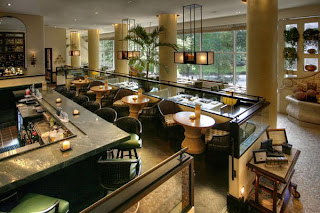 Photo courtesy of the Rittenhouse Hotel

We've dined here once before, during Restaurant Week, and honestly I can't say I remember much about the meal other than feeling rather intimidated by the elegant dining room and the formality of the servers. However, we've always had their brunch on our "list" of eating adventures we would like to have. At $59/person, it would definitely be a special occasion meal. After over a year of talking about it, we decided to celebrate running our first 15K race with what was sure to be a delicious brunch.

I almost made a fatal mistake of waiting too long to make a reservation- just a week out, I had to settle for a 2 PM table (last seating at 2:30!). Upon arriving, our table wasn't quite ready, leaving us stranded for a few minutes. After awhile, the hostess led us to the table.. which still wasn't set. Awkward. Our waiter didn't seem thrilled, but gave us brief directions on how the brunch is set up-- starters and cold dishes in the front of the restaurant, desserts towards the back, and hot items and entrees in the kitchen. Our first foray took us to the closest "stations," the hors d'oeuvres, salads, and raw bar, all of which are located together in the center of the restaurant. 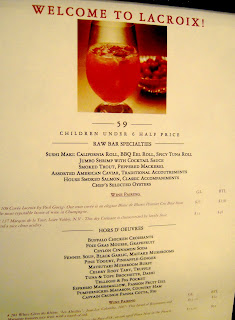 There is some major food love going on here, and I was rather overwhelmed by the number of selections. All of the hors d'oeuvres are portioned out into mini bites, allowing you to grab several items in one go. Everything is also very well labeled, thankfully! Arranged within the plates of appetizers are larger bowls of salads. These aren't your typical Caesar or simple lettuce salads. Actually, nothing here is simple-- the ingredients, the preparation, and the plating are all extremely unique and very carefully thought out. 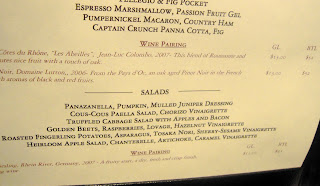 The raw bar is located immediately adjacent, with two large bowls of oysters on ice, individual shrimp cocktails, several kind of rolled sushi, three or four varieties of caviar, and several smoked fishes, all with multiple accompaniments. Basically, it was seafood heaven, and to us made the meal's price tag immediately worth it. On my first go round, I tried beet salad with raspberries and hazelnut vinaigrette, an espresso marshmallow with passion fruit gelee (left spoon), foie gras mousse with grapefruit (right spoon), a couple pieces of sushi, a pumpernickel macaron with country ham, smoked salmon, pine yogurt with pineapple-ginger (white glass), an oyster, and fennel soup with mushrooms and black garlic (black glass). Impressed? Yeah, we were too! As much as I'd like to rave about every single bite I ate, it would probably take all day. So, I'll try to touch on some particularly memorable ones. One of J and I's combined favorites was the macaron. We were both amazed at how this classic French cookie was converted into a savory "ham sandwich." The outer texture was soft and chewy, just as a macaron should be, but with the deep, dark flavor of pumpernickel, stuffed with salty ham. 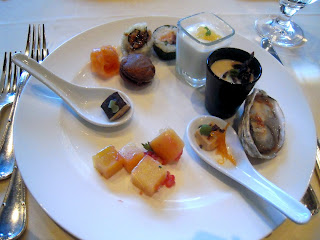 On J's first plate, she also added a shrimp cocktail, another salad, and a chocolate-filled pastry. I forgot to mention-- a huge basket of various muffins, scones, pastries and breads was also located in the same vicinity as the hors d'oeuvres. I (sadly) passed it up completely, keeping precious stomach space for more unique goodies. We both tried the espresso marshmallow, and agreed it tasted a little off. It was probably the worst thing I ate all morning-- extremely bitter and almost herb-y tasting. In the grand scheme of things, it didn't even make a dent in the food joy I was basking in- if I didn't LOVE an item, I would simply taste it and move on to the next. 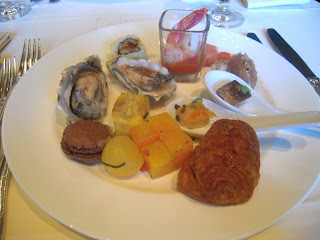 Our second trip to the food found us wandering into the kitchen. It is a little bit weird to walk past the dishwashers and food preps to get to the buffet, but it's an interesting experience and allows you to see the inner workings of the restaurant. It also brings you in closer proximity to the chefs, allowing for some interaction and conversation. The kitchen had a number of "serve yourself" stations, several smaller "take one" options (much like the hors d'oeuvres), and a few carving stations manned by chefs or assistants. This set up was slightly less overwhelming to me-- there were fewer options of things I was interested in trying, and the selections weren't as crowded. 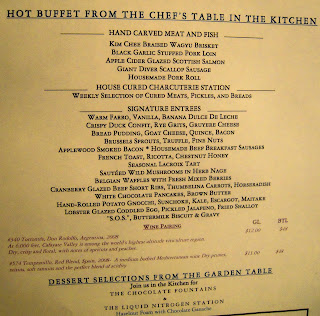 My plate ended up with a warm farro pudding, duck confit with rye grits, a few types of charcuterie, a random escargot, truffled brussel sprouts, a slice of Wagyu brisket, a coddled egg, and a parsnip tart. I also grabbed another oyster on my way back to my seat. The oysters were AMAZING- one of our favorite parts of the meal, and I couldn't get enough. Sprinkled with a little red wine vinegar mignonette, they were perfectly cool, smooth, and salty, and not the least bit gritty or fishy tasting. I could have slurped down a dozen, easily. Refrain had to be practiced however, in order to enjoy this second plate of delight. The brussel sprouts were definitely some of the best I've ever had- just the right touch of earthy truffle oil. I sometimes find truffles overrated, but in this case, they were used perfectly. The duck confit was another one of my favorite dishes- I love duck, and this was falling off the bone, right into a pool of rye grits. I've never had rye grits before, and I'm not sure if they were a chef creation here at Lacroix, but essentially they were exactly as described- the soft, creamy texture of grits with the flavor of rye bread. Delicious! 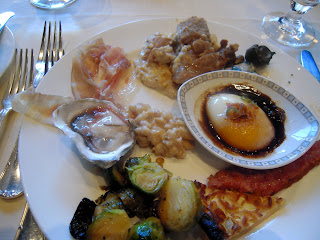 I ended up talking with one of the chefs about the coddled egg- he explained that they are cooked at a low temperature for a long period of time, to essentially create a very soft, and perfectly shaped, poached egg. He said it was one of his favorite menu items, prompting me to try it. Both J and I were a little disappointed though; the egg was so soft that upon cutting it with a fork, the yolk oozed into the puddle of lobster glaze, creating a salty, fishy, egg-yolk soup. I needed something to scoop it up with, and without a spoon, was really unable to proceed.

After plate #2, we weren't quite ready to hit up the desserts, so we headed back to the kitchen to make sure we hadn't missed anything we wanted to try. I convinced J to try the bread pudding with goat cheese, even though it didn't look the most appetizing, and I grabbed the buttermilk biscuit with gravy, which also suffered the same "meh" appearance. Thankfully, we were both pleasantly surprised- again, a thumbs up to Lacroix for beautiful execution in the taste department, even for items that aren't as visually appealing. I also opted to try some sauteed wild mushrooms, a slice of black garlic-stuffed pork roast, a couple of "missed on the first round" hors d'oeuvres, and of course, a few more oysters. The roast pork was another one of my favorites, again making me very glad I went back to try some of the things I didn't select the first time. 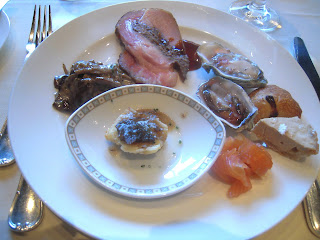 The kitchen also hosts a mini dessert corner, including TWO chocolate fountains. Offered alongside these fountains are many possible "dippers" (in Melting Pot language), including rice krispie treats, marshmallows, fruit, cake, you name it. J found room on her plate for a few chocolate covered macaroons- this time of the coconut cookie variety. You really just can't go wrong here. She also tried a mini white chocolate pancake, in order to test out a few of the specialty syrups Lacroix makes-- not your typical maple syrup, but exotic flavors such as root beer. It really is amazing how many special touches and ridiculous options they offer. 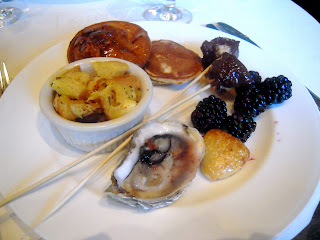 At this point my stomach was getting quite full, and I decided it was time for dessert. We had passed by the dessert table on our way to the kitchen, but this time we stopped and studied all of our options. Again, the desserts are served in mini portions, allowing us to sample multiple. However, unlike at the other stations in the restaurant, I found myself not really wanting many of them. I'm not sure whether it was my now-inhibited appetite, or whether the options were simply not up to par, but regardless, I grabbed a few, including a peanut butter and lime combination (left), a flourless chocolate cake (middle), a banana-chocolate combo, and a tiny scoop of blueberry-pear cobbler. Of course, I added a few chocolate covered items, and some fresh blackberries (berries on steroids-- they were huge!). None of these desserts really stood out- I enjoyed a bite here and a bite there, and of course appreciated the sweet end to my meal, but felt as if the restaurant definitely put a heavy culinary emphasis on the savory eats. 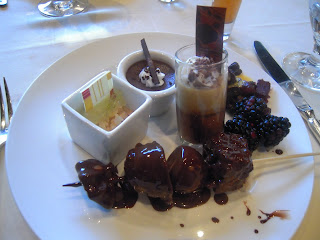 J sampled a different selection of desserts, including a chocolate chip cheesecake (back left) and a cream puff (front left). We also both grabbed cinnamon soda "shots" from the hors d'oeuvres table to enjoy with our desserts, a sweet sip to accompany our last eats. Once again, we were amazed- who makes their own soda?? Thank you, Lacroix! 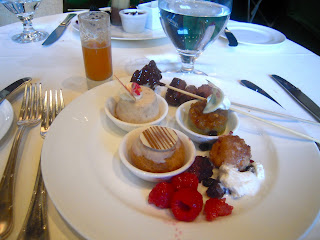 Beyond the amazing food (and drinks), the service here is top notch. Our waiter didn't have a whole lot to do beyond keeping our water glasses filled and clearing our used plates, but he was very attentive and even folded our napkins each time we went off foraging for more food. He did have a slight mishap, giving us the wrong check (we knew it would be pricey, but not $450!), but was very apologetic and helped clear up the mistake. The views of Rittenhouse Square were perfectly lovely as well- no other restaurant in the city can claim views like these, and I almost prefer the bright, sunny "daytime" view that we received during brunch.

Overall, this was hands down one of the best meals of my life. I have never had the opportunity to sample so many delicious items, have access to all you can eat extravagant foods such as oysters, caviar, and Wagyu beef, all while enjoying a casual atmosphere and an open kitchen. It was the perfect meal for a post-race celebration-- I really don't think I could have enjoyed it as much if I hadn't been in need of 9.3 miles of refueling. We both wholeheartedly recommend this experience to all food-lovers, special occasion or not!

Lacroix at the Rittenhouse
210 W. Rittenhouse Square
Posted by Julianne at 8:31 PM