Most days, J and I try to throw together a healthy dinner at the end of the day. It's a priority for us to cook and eat at home-- the cost of eating out can take a toll both financially and nutritionally. Most of the meals I plan take about 30 to 40 minutes to make; easy enough to squeeze into our busy schedules. On the weekends, if we're not splurging on dinners out, I like to play around a bit in the kitchen and prepare a more hands-on, time intensive dinner.

Last week, with freezing temps and gusty winds slowly becoming the norm, I decided to make a healthy spin on a warm, comforting perfect-for-winter meal: gnocchi made from butternut squash instead of white potatoes. The recipe I used as inspiration called for a simplistic four ingredients: squash, flour, salt, and pepper. The mechanics of the recipe weren't quite as simple. The first step: bake the squash until well-softened. I purchased a huge six-pounder, which easily filled up my baking pan. 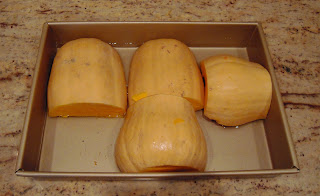 Cut into four sections, de-seed and place face down (as above) in a baking pan with about an inch of water. Bake in a 425 degree oven for forty minutes. Flip squash and bake for an additional thirty minutes, until extremely soft. Remove from oven, drain water carefully, and let cool until able to handle. Then, peel the squash, and mash with a fork (or could be done with a food processor if you're OK with cleaning another dish). Spread out on a baking sheet and allow to cool completely. 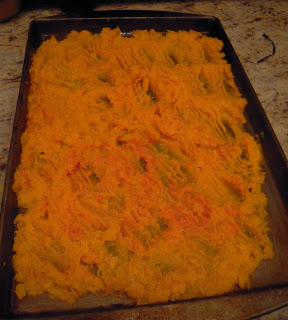 Scrape cooled squash into a pile and begin adding flour-- I used whole wheat, but any type of flour will work (I think a fine corn meal would be another interesting possible twist). Fold into squash with a spoon or two, or by hand (the messy, but more fun version), and continue to add flour until a dough begins to form. For a 4.5 lb squash, you should use about 1.5 cups of flour. 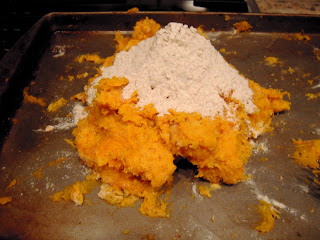 Move the ball of dough to a well-floured work surface (a large cutting board works well and makes cleanup WAY easier), and add your seasonings to taste-- about 2 tsp of salt, 1 tsp of fresh ground pepper, and a sprinkle of sweet paprika for good measure worked for me. 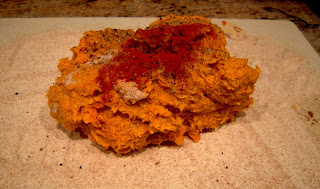 Once satisfied with the flavor and texture of the dough, split off a large handful and with well-floured hands, begin to roll it out. The goal is to form one long, thin roll, about 1 inch wide. 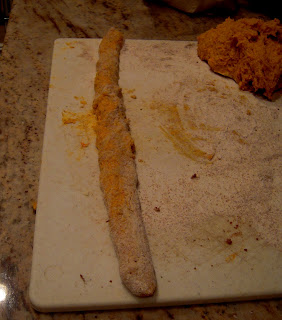 Cut this strip into gnocchi-sized pieces, slightly longer than they are wide. 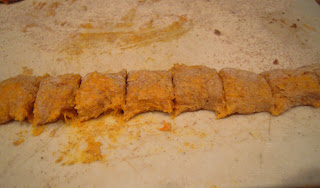 Dip a fork in flour, and roll each piece of dough between your hand and the back of the tines to form small ridges. Place on a baking sheet lined with wax paper or parchment paper, and finish rolling, cutting, and adding ridges to the rest of the dough (note: requires patience). 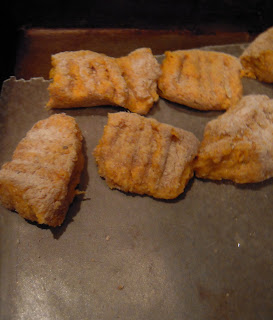 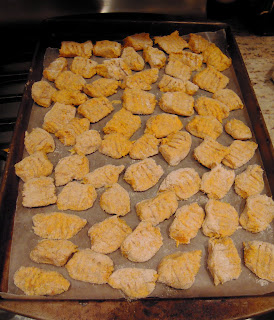 Allow to dry for up to two hours. The entire process is aimed to reduce moisture in the dough without adding too much flour (you don't want dry flour balls). When you're ready to eat, bring a large pot of water to a boil and drop in enough gnocchi to cover the bottom of the pot (too many may cause them to stick together). Keep cook time short-- once the dough balls begin to rise to the surface, they're done. Carefully drain- I used a slotted spoon and moved gnocchi to a strainer to ensure maximal water removal. 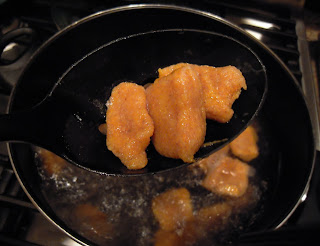 While J didn't love the finished product as much as I had hoped, they still made for a fun and different dinner. The texture was just right- soft and not too chewy, and the boiling process erased any hint of raw flour flavor. The flavor of the squash wasn't as apparent as I expected, but served as a perfect base for a bowl of warm, satisfying "pasta." The lightness of the squash was well-appreciated; I certainly didn't feel stuffed or weighed down at the end of the meal.

These gnocchi can be served a variety of ways-- I used a spinach sauce that I happened to have on hand (spinach, potato, onion and vegetable broth boiled and blended). A classic marinara also worked well with our leftovers the next day. To kick these up a notch, you can add a cup of ricotta to the blend (makes a creamier, saltier bite) or a number of other spices (rosemary, thyme, basil...) depending on which sauce you choose. We plan on making the "kicked up" version for Christmas dinner, along with braised short ribs. 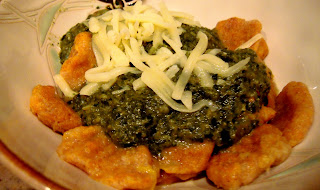