Although the obvious "winning" meal during our time in Florida was Thanksgiving dinner, being home with family gave us a couple other opportunities to spend time together eating. Our older sister and her boyfriend were super great and picked us up from the airport in Tampa. After a quick stop at her apartment to shed our jackets and sneakers, we drove about 20 minutes to Clearwater Beach. There were tons of sunbathers, frisbee-throwers and water-waders... the joys of Florida in late November. After perusing some local craft shops and watching the sun start to set, we walked down to the Clear Sky Beachside Cafe. According to their website, this place has won a ton of local awards, and even goes so far to say "Rated the #1 Restuarant in Clearwater Beach!" Perhaps not the #1 spellers.

Since it was mid-week and pretty early, we got lucky with their Happy Hour food specials- all pizzas and bruchettas were half-price. Since those are the exact things recommended to us by the older sis, we were all pretty jazzed. A & I decided to do the usual- order a bunch of food and share it- and we started with the Smoked Salmon Bruschetta ($9.95 but only $4.48 for us early-birds). Two thick-cut, squishy-in-the-middle-crispy-on-the-outside pieces of bread were topped with a thin layer of soft, well-cooked tomatoes and onions (this is bruschetta after all), followed by a layer of goat cream cheese and a really thick slab of salmon. A pinch of fresh dill topped it off, pulling the flavors together into a bruschetta version of a smoked salmon platter. With the tomatoes, it was a bit weird, but it worked well. My only complaint was the salmon- it was a thick cut and seemed to be some sort of odd in-between of smoked and cooked- I'm used to a little more of a "raw" appearance and texture. 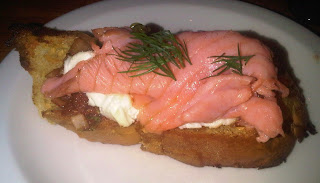 Not surprisingly, we also split a salad, coming to the easy decision of the calamari salad ($8.25). Served on a unique frosted glass plate, this heap of seafood was unexpectedly delicious. A thin bed of lettuce, cucumbers and tomatoes was topped with a heaping pile of marinated calamari strips. Crunchy seaweed, pickled ginger, and a drizzle of spicy sauce made this seem like a big plate of sushi without the rice. The salad was dressed with a mayo/soy sauce/"cusabi" dressing- which is exactly what it sounds like- cucumbers blended with wasabi. This flavor concoction was completely addicting- we seriously could not stop eating and exclaiming over how much calamari there was or how good the dressing tasted. 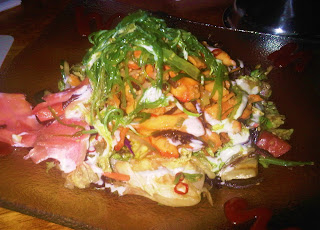 We finished the meal with the California pizza (1/2 price @ 6.50), which was somewhat disappointing compared with the stellar salad. Though it had tons of toppings that I typically love: creamed spinach, artichoke tapenade, bacon, grilled chicken, tomatoes and avocado slices, it didn't come together the way I wanted. I think the mozarella was a little overwhelming, making for a greasy mouth of cheese that muted out those other delicious ingredients. I do commend the crust for being thicker, doughier, chewier, and CARBier than the wood-oven crispy charred types I've been eating recently. Don't get me wrong, I love that style too, but sometimes I just need a big slab of yeasty bread. 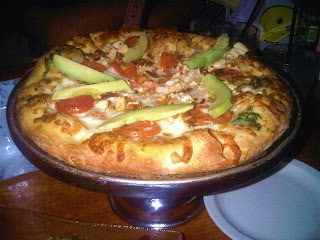 We finished off our feast with a stop at Rita's. A & I almost caused an accident when we shrieked "RITAAAS!!!" as we drove by. Seriously it has only been a couple of weeks since I got my custard fix but apparently that is way too long.

Post-Thanksgiving events always include shopping, and shopping inevitably induces hunger. After a busy and successful morning at the St. Augustine outlets, our mom treated us to a late lunch at Sonny's, a BBQ joint native to our hometown- the first one opened in Gainesville in 1968. Now it's a pretty widespread chain, but definitely nowhere near our current place of residence. 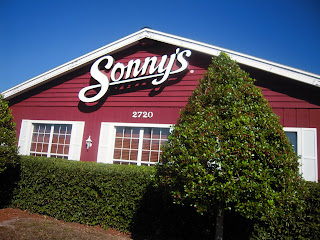 They have super cheap lunch specials, so that's what I typically order if I'm in around the noontime meal. This time I was craving ribs, so I got the "Sweet & Smokey Ribs" ($8.59) which comes with two sides and your choice of bread (a ridiculous amount of food...). The service is fast and most of the waitresses were sporting Gator gear which earned them an extra tip. Three meaty ribs were served with a coating of their signature "Sweet" BBQ sauce. Though the meat wasn't completely falling off the bones, it was still pretty tender thanks to a long and slow jaunt in the smoker. The coleslaw and sweet potato were pretty standard, but I'd forgotten just how good Sonny's cornbread is. Further on the "sweet" side of the spectrum than I typically like, it is full of corn kernels and cornmeal. It's the kind that sort of soaks up your saliva and turns into this sweet corn mush... my mouth is watering just thinking about it. 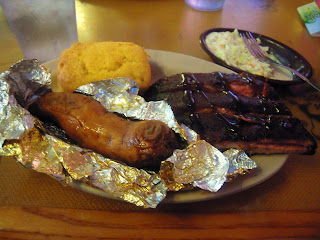 A was also eyeing the ribs, but she went for the smoked turkey ($6.99) and we made a little meat transaction- one rib for a slice of turkey on a 1/2 piece of garlic bread. Sonny's garlic bread is also pretty darn good- greasy and salty without being over-the-top. The turkey also has lots of smoky notes and is extra juicy. It's more like a deli cut of turkey- a little bit of a processed texture to it, but the flavor is worth whatever they do to it. Topped with some "Sizzlin' Sweet" sauce, and this turkeys got it goin' on. Spicy, sweet, salty, and smoky... sounds overwhelming, but it's just plain good. 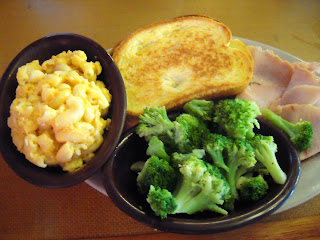 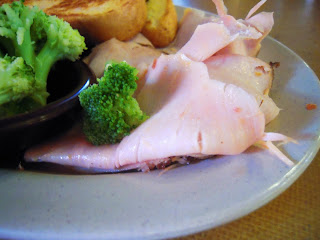 We had a wonderful time enjoying the Florida sunshine, good food, bad football (sorry Gators...), shopping, and lots of time with family, which is what means the most.