Thanksgiving for all families is filled with traditions, both new and old. Our traditional Thanksgiving is held at our parent's home, with several members of the family and a few family friends present each year (more or less). We eat the same meal every year, cooked primarily by my dad. I must say we've had a few variations on the standard turkey over the years-- my dad even invested in a Turducken a few years back (quite delicious), and has experimented with injecting flavors, brining, basting, the works. Outside of the turkey, the side dishes have remained almost completely stagnant.

Not to say that's a bad thing- we've always loved our Thanksgiving meals- but as we've grown up and learned our way around both food and the kitchen, we've started to ask ourselves why it must always be the same. This year, we decided to change things up a bit by introducing an entirely new dish to the table (gasp) and we were happy to see that our dad also altered one of the traditional sides (sweet potato casserole) to produce an even better rendition.

Since we are big vegetable fans and our Thanksgiving table tends to run a little low on green-colored foods, we decided to add a veggie dish. Inspired by Giada de Laurentis on the Food Network, I proposed a side of brussel sprouts, roasted with cranberries and pecans in order to make it more "Thanksgiving-y." We sent our ingredients list to our dad, who unfortunately had to do a wild goose chase through our hometown in order to hunt down what may have been the last package of fresh brussels in town-- thanks, Dad! 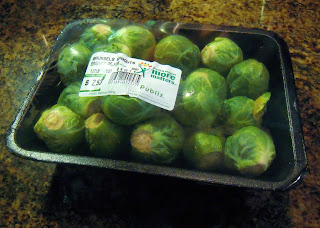 Our dish had to be able to fit into the tight prep/cooking/oven schedule that must be kept in order to get all of the food on the table at the right time. Roasted brussels fit the bill- easy and quick to prepare, and only need about 30-40 minutes in the oven right before dinnertime.

Thanksgiving Brussel Sprouts
based on this recipe

J and I worked together on the prep work. She removed the tough base of each sprout and quartered them, then combined them in a baking dish with the cranberries (roughly chopped) and the pecans. We had raw pecans on hand, and gave them a quick toast in a pan in order to bring out additional nutty flavor. 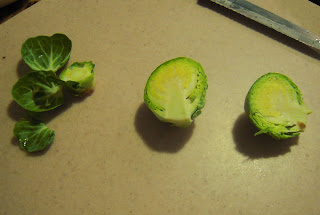 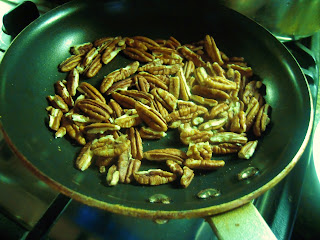 I started on the orange juice-maple glaze by first reducing the orange juice. This took about 8-10 minutes over low heat in an uncovered pot (the water needs to evaporate!), with sporadic whisking to prevent burnage. Once it was reduced to about half of its original volume, I removed it from the heat and added the maple syrup, butter, and salt. Once the butter melted and everything was whisked together, it was poured over the brussels. At this point, the prep was done, and the only thing left to do was bake it. 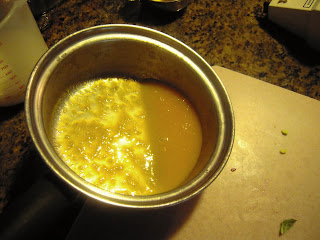 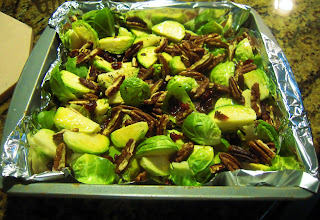 The oven was already going at 425, which is a perfect roasting temp. After 20 minutes in the oven, I checked the sprouts, and was a little nervous to see that the pecans-- which had been nicely pan toasted-- were increasingly browning in the oven. Not wanting burnt nuts, I gave everything a toss, bringing the glaze from the bottom of the dish up to moisten the pecans. This seemed to work for a bit, but I pulled the whole pan out after 30 minutes (total cook time) to stay on the safe side. While other dishes were being plated, I covered the pan with tin foil in order to allow the sprouts to self-steam and finish cooking without ruining the nuts.

Our dish was met with mostly positive comments-- I know we both appreciated a new friend on the table, and more green on our plates. I wouldn't go so far as to call this a "healthy" dish- with the juice, cranberries, and maple syrup, it has a fairly high sugar content, but the sweetness really compliments the star vegetable and the crunchy nuts. A few family members were a little bit nervous about eating brussels-- I guess they don't have a great reputation. We were happy that most members of the nervous crowd were very pleasantly surprised, although one could only go so far as to comment that her little taste "didn't make me throw up." I'm still debating whether I should take this as a compliment. 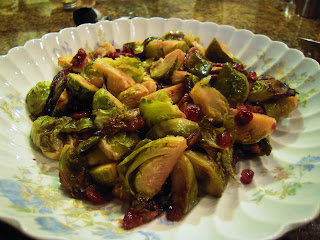 Does your family stick to the same exact foods, or would they be willing to try something new?
Posted by Julianne at 4:49 PM