Inspiration for one of this week's dinners came from two sources: our lovely recently-wedded friends and our CSA. We were very thankful to experience (and be a part of) our friends' recent wedding, and took home wonderful memories as well as some great gifts. As the bride and groom currently live in Memphis, they gifted each guest with a small bottle of homemade spice rub, a little taste of their new hometown. 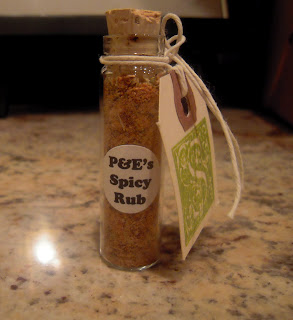 As soon as I saw these, I knew I wanted to use it on fish, and thankfully the opportunity didn't take long to arise. In this week's CSA we received two MONSTER leeks, and I decided to prepare it much the same way we prepare many of our CSA veggies: roasted. My first task was to create a "side dish" with the leeks, to go with the spicy fish. The best thing about my final product is the overwhelming simplicity of it. The entire meal used only seven ingredients (minus a few common items such as salt and pepper)! 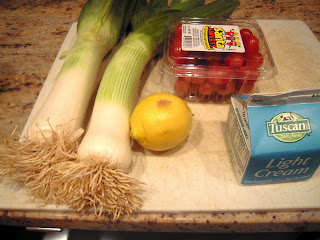 First, I sliced my leeks into 1 inch chunks, starting from the end and working my way up through 2/3rds of the dark green part. I then sliced the larger chunks in half, and rinsed out the green pieces (leeks are notoriously dirty, and very good at hiding it). These went into a roasting pan sprayed with cooking spray, along with a carton of grape tomatoes. I sprinkled them with salt and pepper, gave them a light top coat of cooking spray, and into the oven they went (425 degrees for 35-40 minutes). 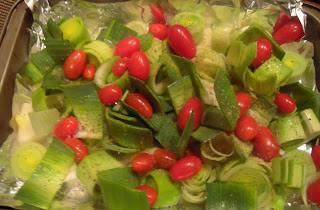 As my vegetables were baking, I started preparing the fish. I used two large filets of mahi-mahi, but any good white fish will work. I combined 1/2 cup of panko breadcrumbs with 1.5 bottles of spice rub- about 3 tablespoons. Sorry, you'll have to check with the newlyweds for the special spice recipe! 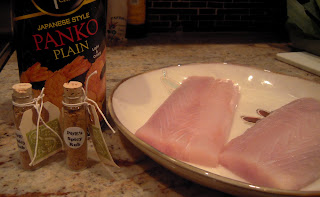 The fish was wet enough so that I could dredge it immediately in my crumb mix, but if it was on the drier side, a dip in milk/egg whites/water would do the trick. After a good coating was applied, I carefully laid it into another greased pan. I timed it so that the fish and the leeks would be done simultaneously-- allowing the fish about 12-15 minutes total. Bake for 6-8 minutes (the timing will really depend on how thick the cut is) and then carefully flip the filets and finish on the other side. 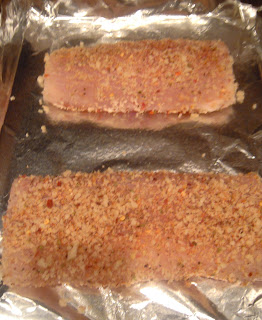 The final step: the lemon-cream sauce. Sounds kinda fancy, right? SO easy. I heated a small pan, drizzled in a tiny amount of olive oil and added a chopped garlic clove. While that was heating up, I zested and juiced a lemon, and added this to the pan as soon as the garlic was good and sizzly. 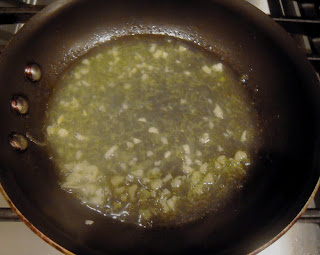 After about a minute, I lowered the heat and poured in the cream, stirring as I went. This stayed on low heat as I pulled out the fish (check for doneness by gently pulling a corner away-- if it flakes, it's done!) and the leeks (they should be soft and slightly crisp at the edges, and the tomatoes should be wrinkled) and plated both. Final step: pour the sauce over the leeks, add a piece of toasted bread, and serve! 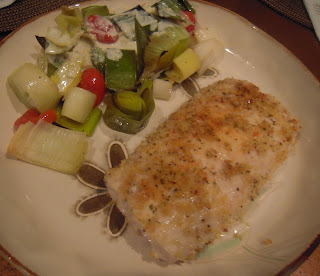 One pound of fish and the two giant leeks provided enough for two dinners and one amazing leftover lunch-- but you can certainly scale up or down (or simply serve less-- our veggie portions are pretty outrageous). The flavors and textures of the juicy, panko-encrusted mahi with a hint of almost Cajun-y spice was well complimented with the subtle lemon-scented leeks and tomatoes. For seven ingredients, and just 45 minutes in the kitchen, I was impressed-- and I think you will be too!
Posted by Julianne at 8:11 PM