I have a Philadelphia foodie confession: I do not support food trucks. It's not that I have anything against them, rather I just have never really ventured into the scene. As I enter my seventh year at Penn (yikes), it seems almost impossible- they're everywhere, they're cheap, they're fast, and word on the street is that many of them are delicious. Don't get me wrong, I have eaten from them.. but only a handful of times. Recently (maybe since I graduated from undergrad?), the food truck scene has seen a bit of a change-- it seems the number of trucks has increased, and some of these are trying their hand at a more gourmet, out-of-the-box concept. One of these is Honest Tom's Taco Truck, which I have read about countless times, and seen more than my fair share of mouth-watering taco pictures produced by Tom. 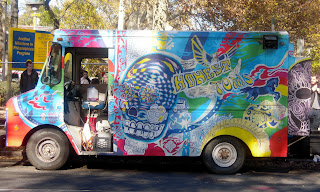 The problem with these upscale trucks is location- they tend to roam about the city, not staying in one constant spot like many of the Penn classics. Honest Tom's has a few spots around town they tend to stop at, one of which is West Philly's Clark Park on Saturdays. Needing to do a little weekend work in lab, which is really just a few blocks from the park, I figured I'd make a side trip for some tacos. As I approached the park, the location of the truck was immediately obvious-- it's very bright colors as well as the hoard of eager taco-ites surrounding it made it easy to spot. I really hate crowds, and was bordering on hangry (the grouchiness/anger that sometimes accompanies deep hunger) but decided I had to follow through with my plan. I stood in a short, unorganized line to place my order with the woman at the window-- Tom made it easy by only offering a single choice, the breakfast taco. 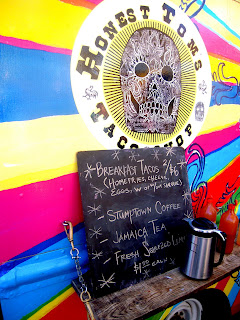 I then waited in a cluster of people waiting for food, and watched the process. Order, wait 5-10 minutes, hear name called, weave through people* to try to reach tacos, awkwardly reach around people* to squeeze hot sauce onto taco or God forbid, have to juggle both tacos and coffee to add cream and sugar to the latter, emerge from the crowd looking a bit worse for the wear, hastily scarf down food somewhere in a 15 foot radius of the truck. It was seriously enough to raise my blood pressure just watching. Like I said, I don't like crowds.
*West Philly hipsters. They were out in full force.

I finally received my order of tacos, hurried through the above process, and escaped across the street to the park to find a quiet bench to eat. The breakfast tacos (2 for $6) each consisted of a mini flour tortilla filled with scrambled egg, breakfast potatoes (chunks of simple pan fried potato), shredded cheddar, and a scoop of guacamole. They came with an option of sausage or no sausage (for all those vegetarian hipsters), and I chose one of each. The first bite was delicious- I love all of the above foods, so together wrapped in a soft tortilla, I was happy (particularly considering my hunger level). 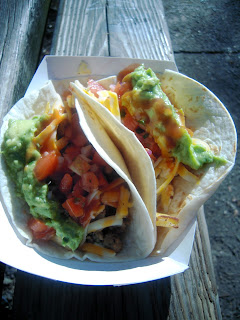 However, as I worked my way through that first taco, I started to realize it wasn't all it was hyped up to be. To begin, it wasn't hot. Warm, maybe, but not nearly hot enough to melt the cheese. By the time I made it to the second taco, it was bordering on cold. The guacamole was also a bit off- the sharpness of the lime and onion was too much, overpowering the other items in both the condiment and the taco as a whole. The flavor of the eggs and potato were just.. lost, leaving their textures to try to fend for themselves. This might have been OK if the potatoes were thoroughly cooked- I had an unfortunate bite of crunchy raw potato in one taco. The sausage was the one saving grace, leaving me wishing I had ordered both tacos filled with meat. It had a sharp rosemary flavor that made a perfect breakfast sausage (although paired with guacamole, I'm not so sure). They were also a little on the small side- I might be used to the supersized portions usually found at food trucks, but I wanted something a little more substantial. 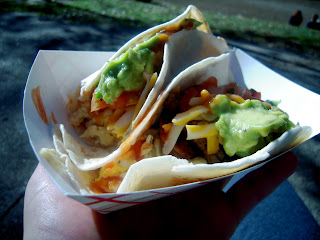 Palm-sized tacos. And I have small hands.

I was also looking forward to getting my caffeine fix via Honest Tom's-- they brew Stumptown coffee, the absolute best coffee I've ever had. My small cup ($1.50) should have been plenty- my experience with Stumptown has always been a perfectly bold but smooth coffee with a surprising caffeine kick, needing just a touch of cream to help it down. I'm not sure what happened here- it was just not good. It had a burnt flavor, and the "cream" offered by the truck (which poured much more like watered down milk) did nothing to temper the flavor. I sadly threw it out after just a few sips. 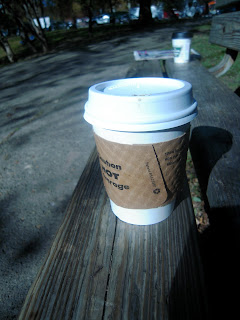 Overall, I have to conclude that Honest Tom's is overrated. Perhaps it was the size of the crowd that forced the truck to speed through the taco making process, but I'd rather wait a few more minutes for a quality product than eat mediocre food. I know I could make a better breakfast taco (perhaps a future blog post?), probably for a similar price. On the other hand, Honest Tom's does make a variety of other tacos, although I believe breakfast tacos is their Saturday special (the only day I would ever be able to get to them!), and perhaps they are better at these other options... perhaps.

Thankfully, my trip to Clark Park was made a bit better by the discovery of super cheap dried spices and a delicious "healthy" chocolate chip-four seed cookie (baked by previously unknown local Slow Rise Bakery), both found at the nearby farmer's market. I still have another taco truck on my "list," and we'll hope that this future experience will help bolster my opinion of food trucks!