With our love for any food originating in the South, creole & Cajun food always hits the spot. But really, who doesn't like spicy fried things? Although we've never been to New Orleans, Catahoula, the new-ish Cajun restaurant on Front Street, gave us a little taste of the city. The location is a little further away than we usually venture, but hey, sometimes you have to make an effort to get to some good food. 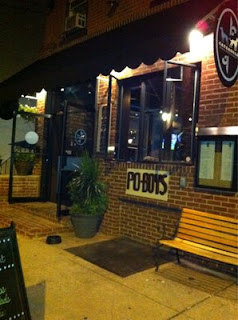 Arriving a little after 6 PM on a Friday, we snagged the last table, a two-top by the door. Without a hostess, the no-frills atmosphere lends itself to Catahoula's laid back vibe. With only a handful of tables and a long stretch of a bar, the space seems to have a bit of an identity crisis. Some snazzy design elements such as huge gilded mirrors and ornate wood built-ins behind the bar are juxtaposed by the big-screen TVs and chalkboard menus. Advertising specials during Eagles games yet with a solid non-bar-food menu, it just seems like a weird mix of sports bar and cozy Cajun eatery.

One benefit of the weird mix is a solid list of Happy Hour deals. From 5-7 PM you can get several of their menu items in smaller portions and for less money. A & I opted to start with one of our faves: fried oysters ($5). Two fat oysters were rolled in a light cornmeal batter, deep-fried, and dusted with a spice mixture. The outside was soft and subtle, letting the bite of seafood shine. The highlight of the dish was the sauce- a creamy, tangy tartar with whole-grain mustard and dill. A squeeze of lemon made the whole experience ridiculously good. New favorite fried oyster? Quite possibly. 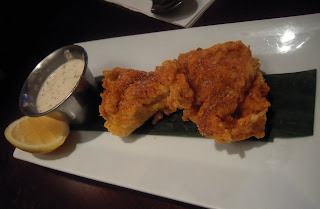 We also started with a "cup" of the Crawfish Bisque ($5). Although we ordered a cup, and were charged for a cup, we were definitely served soup in a bowl. With a darker color than most bisques, the flavor was still creamy with a strong seafood punch. A few small bits of crawfish gave a little texture- I would have liked a few MORE small bits. The roux seemed a tiny bit off- we both commented on the flour-y taste, but it actually ended up being a good thing. I literally felt like I was eating a buttery biscuit topped with a spicy piece of fish... in liquid form. So while some might see the flour flavor as a negative, we actually enjoyed it. 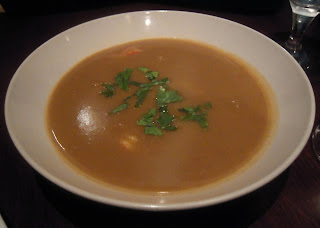 From the "Big Papa Plates" section of the menu, A chose the Braised Duck Jambalaya ($18). A big meaty duck leg came served on a bed of slow-cooked rice chock full of Andouille sausage and slow cooked veggies, namely celery and green pepper. Heavy on the heat, the texture and flavor of the jambalaya was rich and hearty. The duck meat was a little on the greasy side for me, but A loves duck and believes "you can't go wrong with duck." There did seem to be extra flavorful little pockets of jambalaya under the big hunk of meat- some of the skin was left on to add some of that juicy, smoky, meaty flavor. The sausage gave it an extra kick, but I preferred digging out the soft pieces of bell pepper that just soaked up all the jambalaya goodness. 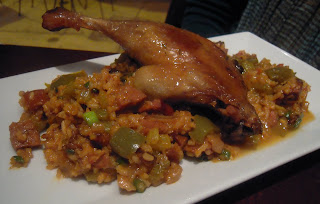 I chose the catfish Po' Boy ($10), which starred a big hunk of whitefish fried in the same batter as the oysters. The sandwich roll was toasted, giving it a few crispy edges while still maintaining a super fluffy inside. The remoulade sauce was amazing- a more classic version of a tartar with chopped pickles and a touch of vinegar. A few slices of tomato and some shreds of lettuce seemed like an after thought. I was a little worried that the whole mess would be really crispy and crunchy, so I was pleasantly surprised to bite through soft bread, soft fried shell, and soft flaky fish. The sauce made everything pretty juicy so I made a bit of a mess, but overall it was a solid sandwich. However, I definitely think that the chefs could go a little more modern with this and play with some of the components. The side of fries, though well cooked, were ridiculously salty. Probably a good thing, since that limited my consumption. 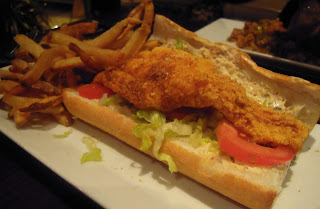 Of course we're never ones to turn down dessert, and the dessert list is extremely enticing. We ended up making an unusual (for us) choice in the Molasses Pecan Pie with Buttermilk Gelato ($7). With that sickening sugar-jelly-weirdness that usually makes up pecan pie, it's just not our favorite. However, I like molasses and A knew the buttermilk-flavored gelato would be right up her alley so we took the risk. Thankfully, we were quite pleased with the outcome. With a soft, buttery crust with just a thin layer of pecan mush, most of the pie consisted of soft baked pecans drizzled with molasses. The gelato (tasted suspiciously like ice cream but whatever) was sweet and creamy and amazing. We ate every bite. 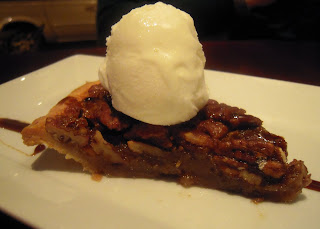 Although the atmosphere is a little off, we realize this place is going for a neighborhood feel. Fortunately, the food was tasty and the prices were fair for what we were served. Nothing was out-of-this-world unique or original, but everything we tried was solid; I'd love to get back there to try the brunch. With Craig LaBan reviewing it tomorrow in the Inquirer, it'll be interesting to see what his take is on the tiny, casual, Cajun Catahoula. 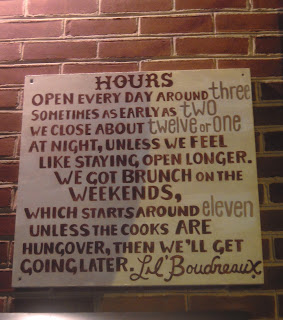