Although it definitely looks like I missed out on those delicious looking pork chops A made over the weekend, I always eat well when I travel to Boston. This time, my weekend revolved around running my second half marathon race, again with my boyfriend in tow-- the truth is, he barely trained and still easily ran alongside me. One great bonus of long distance running is the large quantities of food you can consume post-race (as you all have recently witnessed in our Lacroix visit). After a solid performance up and down the hills of Newton (but somehow mostly up), we discussed celebration tactics. Armed with a tip from my yoga instructor and further recommendation from a couple of foodie friends, we headed to Picco, a restaurant specializing in pizza and ice cream in the South End.

Our timing was optimal as we were seated about ten minutes to twelve, scoring the best table in the house right by the front windows. The space isn't too big, with a long bar occupying one side; a cushy bench along the other allows for efficient use of table space. We were greeted by our waiter and began to peruse the menu, which thankfully isn't too complex. Sandwiches and pasta options looked like standards, with a few "specials" that kicked it up a notch (pumpkin ravioli? yes please).

Our mutual love for vegetables had us opting to start with a garden salad ($6.50). Since we were splitting it, Picco graciously served the salad on two smaller plates, ensuring that I got my fair share in the split. Ingredient wise, it was everything I love- a good mix of arugula, baby speckled romaine, and a bit of endive, as well as finely chopped cucumbers and peppers and a shave of carrot. The dressing was incredibly minimal- perhaps only the slightest mist of oil. I topped mine with a few grinds of pepper from the baby pepper mill on our table. The earthiness of the greens provided me with a bit of freshness before we dove into some heavier fare. 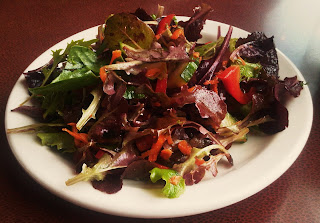 Because Picco came on the recommendation of their pizzas, we knew we should focus on this portion of the menu. We each chose a small pizza to share- with the small size at least a foot across, serving up four reasonable slices. I immediately decided on the Alsatian ($13.50), which Picco describes as "our version of France's tarte flambe". Wikipedia tells me that this is a pizza-like item with pork, onions, and creme fraiche. Picco stays fairly true to this description, with their doughy yet crispy crust covered in chunks of bacon, caramelized onions, garlic and shallot, finished with shreds of gruyere and dollops of creme fraiche. This unique combination was a savory and salty mix of meat, bread, and cheese- again a nod to some of the things France is known for. The garlic and onions give a sweet and rich depth of flavor, while the creme fraiche just makes this pizza completely luxurious. 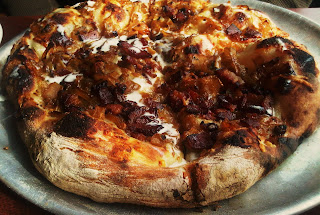 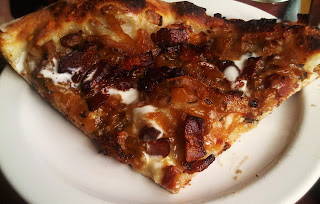 The boyfriend initially chose the Broccoli Rabe, Sausage and Olive pizza, but I shot this down- I don't love rabe and olives on pizza aren't my thing. After getting teased about being "a picky eater", I pointed out the Sausage & Mushroom ($13.50) as a fair alternative. With the red sauce of chunky tomatoes and fennel-rich crumbled sausage, this pizza was on a whole different level of the taste spectrum. I'm not sure why I thought the two would be similar, but they weren't at all. The ingredients here were a bit more "wet", giving the crust a more doughy consistency, though it held up well through the eating/holding process. Stringy slices of mild mozzarella provided some glue to hold everything together. I commented that I typically enjoy eating the crust of pizza the most- but this was not the case with these pizzas- I happily gave up my crust to allow more room in my stomach for gooey topping-covered goodness. 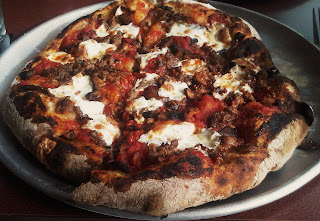 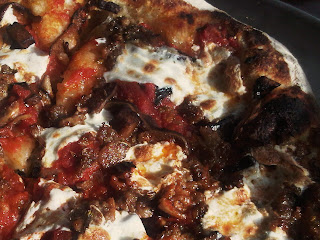 Although I was certainly full by this point, Picco is also well-known for it's ice cream. A solid selection of sorbet and ice cream flavors are available in their purest form- in a cup or cone accompanied by a small number of topping options. My boyfriend doesn't hold back when it comes to dessert, so he ordered the most decadent option- the Dark Chocolate Brownie Sundae with Dark Chocolate Ice Cream ($7.00). The bite of brownie I stole was pretty standard, but the real winner here was the thick chocolate fudge- almost like a hot fudge but incredibly dense and with a flavor much more similar to a solid bar of dark cacao. With most hot fudge being super sweet and "fake" tasting, we were both impressed with the quality and richness providing a bitterness to complement the sweet and creamy ice cream. 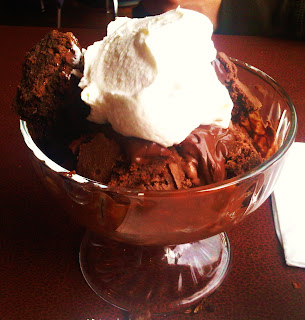 I went with something a bit more simple- caramelized apples with vanilla ice cream ($6). Our waiter said it was a new item on the menu, though I'm not sure if it is permanent as it is not advertised on the website. I have a soft spot in my heart (stomach?) for good vanilla ice cream, and Picco didn't let me down. Speckled with vanilla bean, the flavor was perfect- not too rich, almost delicate. The apples were caramelized to a golden brown, providing tons of natural sweetness as well as a kick of spicy cinnamon and a buttery touch. 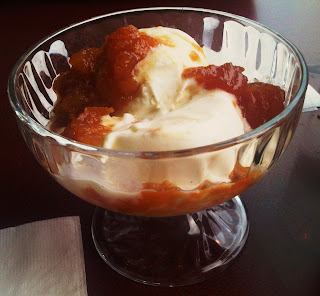 Overall I was incredibly impressed with the standard of quality at Picco. The two pizzas outshone everything I've had in recent memory, even the uovo pizza at Barbuzzo. The crust had that powdery char on the bottom but was still substantially thick (NOT a thin crackery wisp) providing lots of chewy carbs to satiate my post-race hunger. The salad appeased my need for veggies while the ice cream was a pure reward to end the meal. Although the place got very busy and filled with many young families with more than a few kids, our little corner by the window provided sunshine and amusing views of the passers-by. The prices were OK considering the location, as well as the quality/quantity of food we were served. I think our waiter was pretty impressed (or perhaps disgusted) with how much we consumed- a normal couple in for a lazy Sunday lunch would not need nearly as much food as we did. I'll definitely have to work up an appetite for next time!