So remember that sandwich competition I randomly entered a few months ago? No? Yeah, I hardly did either. Then one day last week, I received a package notice from the post office and bewildered, went to pick up my mystery package. Turns out, my entry won one of the runner-up awards! Apparently they decided not to contact me, and just sent the award package-- two panini spreads and a Tom Colicchio cookbook, "'wichcraft," full of wonderful sandwich ideas. (Side note: the winning recipe consisted of a cold lamb and sheep's milk feta sandwich).

Of course, I had to read through the entire book, ooh and ahh over the delicious sounding eats, and exclaim over at least a dozen of them to J (I don't think she was as amused). My first goal was to create one of the sandwiches in the book, using one of the panini spreads that were also a part of the package. Unfortunately, it didn't seem possible-- none of the recipes included cranberry apple chutney or olive tapenade. Since I'm not one to follow recipes to a tee, I found one that could be modified to include the olive spread. 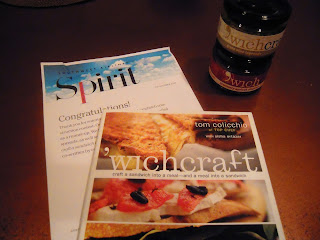 The recipe involved sourdough bread, fresh mozzarella, roasted red peppers, poached chicken, and a spinach-basil pesto spread, all pressed and heated. Instead of creating my own pesto spread, I decided to substitute the new olive tapenade, and was forced to switch from red peppers to green due to the abundance of green peppers in last week's CSA. 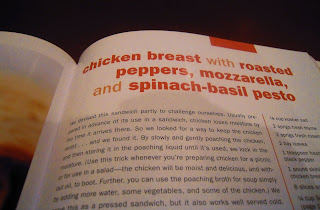 First step: roast the peppers. You can either do this by baking them whole for about 45 minutes at 350, or take the easier/quicker route by broiling them in strips for about 8-10 minutes. My peppers were of the mini bell pepper variety, and didn't take long under the broiler before they were charred and blistered. We're going for burnt here! I set them aside to cool while I prepared my chicken.

I combined dried rosemary, dried thyme, salt, and pepper with a half pot of water and waited for it to boil. Once boiling, I dropped in a pound of chicken breast strips and allowed them to cook, covered, until completely cooked through (about 10 minutes, but more time doesn't necessarily hurt). The poaching process allows the flavors of the herbs to infiltrate the chicken without any fear of drying the meat out. I've never thought to do this-- it's quick, easy to clean up, and created a juicy, flavorful sandwich component. 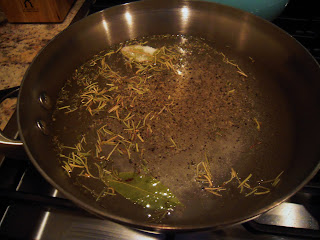 I somehow forgot to take a picture with the chicken... Also, this looks deceptively like a skillet, but it is, in fact, a pot.

After the peppers cooled, I carefully peeled off the charred skin-- easier said than done. Since these were on the small side, the flesh was a little too thin and fragile to hold up to the rough peeling process. A larger, more mature pepper would have made it much easier, which I suppose is what I get for trying to make substitutions. 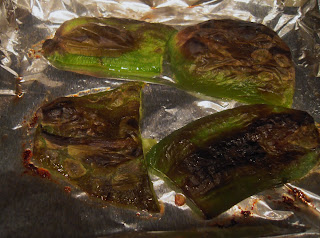 The final assembly could then be done: spread tapenade over one slice of bread, lay roasted peppers and sliced fresh mozzarella over this. Then, add chicken strips and a pile of fresh baby spinach (in keeping with the spinach theme from the left-out pesto). Top with second piece of bread and carefully lay in a hot, buttered pan (or a sandwich press, if you have one). I placed my cast iron grill pan over the two sandwiches to help emulate the press and speed the crisping process. 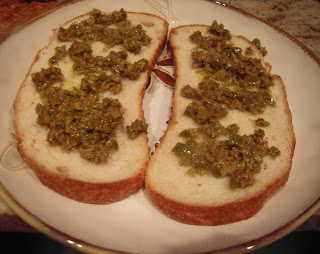 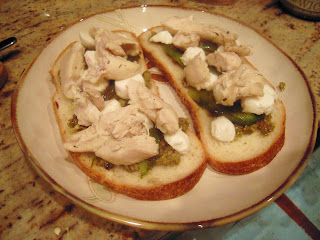 They cooked for 3-4 minutes on each side, just until the bread was toasted, the spinach was wilted, and the cheese was melted. Total, the meal took about 30 minutes to put together-- perfect for a weeknight meal. 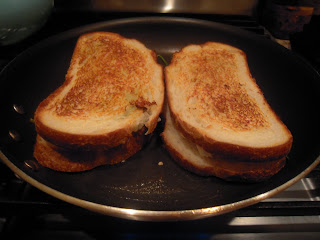 The final product was a great combination of textures and flavors, kind of creating a beefed-up spin on a grilled cheese. The olive tapenade created the perfect saltiness, bringing more flavor to the fresh spinach and peppers. It wasn't a ground-breaking recipe by any means, but introduced me to a convenient cooking method and a quick meal idea. I'm looking forward to trying some of the more complex recipes soon-- I have many recipes marked as "must haves." The whole experience also has me considering other food-related competitions-- you never know, you could end up with a surprise win! 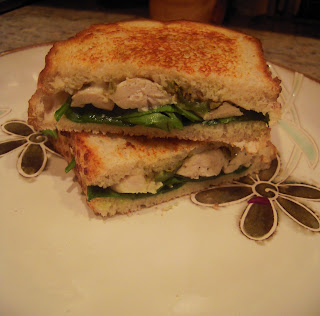