Between both of our recent trips (A to California for work, me to Boston for the race) and the Thanksgiving holidays, A and I haven't had any good opportunities to try a new restaurant. We decided to treat ourselves to a mid-week dinner out, which happened to coincide with the night of Pub and Kitchen's "2nd Annual Country Delight." We've been fans of P&K for awhile now- their brunch is one of the best late Saturday morning options near our place. The whole "country" theme is something we typically enjoy as well, so it seemed like a good bet.

We showed up a little after 7 and the party had already started. Lights were dim, hay bales were everywhere, and country music was blaring near the bar. Thankfully, we were led to one of the last tables in the back room where it was a lot quieter. A western movie and the staff's bandanna & boots get-up kept us feeling included. We were offered the regular menu, which had the "country special" scrawled on a little extra piece of paper. 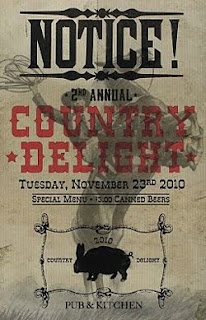 Before we get into the special, there were a few other items on the menu that we wanted to try. P&K recently updated their "snacks" section of the menu, and the cheapest option is the duck mousse ($3). I was totally enamored with Barbuzzo's mousse (and even went back to have it again) so I ordered this to start. It was served in the standard manner- ramekin full of mousse with a few small slices of super toasted bread. The texture was a little bit "finer" than I have had in the past- easy to smear across the bread and lick off the end of the knife. And while the mousse was good, and we easily finished and enjoyed it, it seemed to be lacking some extra dimension of richness that I was craving. It wasn't quite creamy enough and didn't give me that mouth-watering, good down to my bones feeling that I experienced at Barbuzzo. However, P&Ks is a bit cheaper and closer by, so I wouldn't say no to having more of it. 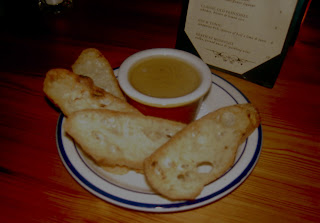 Since the country special would be inevitably artery-clogging, A & I also decided to split a salad- the mixed greens ($9). Expecting a nice pile of lettuces and a few other assorted veggies, the salad looked right up to my standards. After I stabbed up a forkful, I noticed it seemed a little.. dry. I tried my best to mix everything together but it was still just.. dry. It was like they gave us one or two tiny drizzles of dressing that seemed to evaporate before we could taste it. However, I know I can enjoy a salad without a flood of oily dressing. If the toppings provide a lot of flavor and moisture, no problemo. However, this salad was the complete opposite. Thin slices of apple were barely sweet, and some circles of daikon or white radish had no flavor, crunch, or moisture to be found. Seriously. This is why carnivores call it "rabbit food." 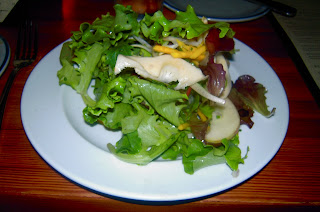 We went all out with the one-night special and split the "fried chicken and cornbread" ($13) and ordered all three sides ($3/each). Four pieces of chicken (two legs & two breasts) were dipped in a buttermilk batter and deep fried- and this aspect of the chicken was amazing. With a super "light" texture, and tons of crispiness, I definitely tried to nibble off every bit of the outer fried layer. As for the meat of the meal, I have mixed feelings. At first bite, my teeth easily sunk into the juicy meat- not a hint of toughness and plenty of meat on the bone. However, this "softness" became just a little bit strange- A compared it to seeming almost undercooked, although this certainly was not the case. I'm no chicken-frying expert, but it seems like something may have been off in terms of oil temperature or cooking time. Either way, it had me wanting some Korean Fried Chicken from across the street at Meritage (which they aren't serving anymore... I'm slightly devastated...).

The chicken also came served with a single "jalapeno" cornbread muffin. Fortunately, it had little to no flavor and the texture was much too fine and dense- we like a good gritty crumbly cornbread. Had it been delicious, we might have had to battle it out- why 4 pieces of chicken and 1 piece of cornbread? 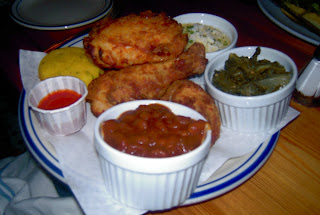 The sides were also served in small ceramic dishes and covered all the bases in terms of country staples. My favorite was the parmesan grits- P&K made up for the cornbread in this dish. The gritty corn-based mush is down-home at its finest, and the addition of a solid amount of good-quality parmesan flavor added creaminess and the saltiness that grits always need. The cider-braised greens were also quite satisfying. A good vinegar base, tons of soft-cooked onions, and just the right amount of salt to complement the greens. A paper cup full of hot sauce was served to add as we wished- the greens got a good dollop. Nothing beats greens and hot sauce. The third has somehow completely slipped my memory- I think I only had a bite or two, clearly not enough for my synapses to fire- but A claims it was a cup full of baked beans in a thick barbecue sauce. Apparently they were "pretty good."

A couple of the dessert options sounded good (especially the bread pudding with dried fruit), but we had a MANNA carrot cake waiting at home in the fridge. Which was sadly, probably the best thing I ate all night. Not that the country food at P&K was bad, it just wasn't as good as I wanted it to be. I did love the concept of a one-night theme- the Garth Brooks in the background was very much appreciated. Looking back at the whole thing, I think P&K was definitely concentrating on this from their "pub" aspect- cheap beer and special drinks seemed like the real reason most people were there- letting loose before the holiday, I suppose. Oh, well. We'll certainly be back for brunch at some point.