Perusing one of the local Philly "Things to Do" blogs (Uwishunu) recently, I came across a post about one of my favorite foods: barbecue! One of our very first posts discusses the semi-lack of good BBQ in Philly, and I was interested to see which restaurants Uwishunu supported. I was disappointed to see that most of them were actually not in Philadelphia proper, but out in the 'burbs, until I saw that one of them was located in Jenkintown-- the only suburb I frequent (the boyfriend lives there). Even better, the BBQ joint was located literally around the corner from his house! While he nor his family had ever been there/heard about it, I decided it was about time to try it out.

Rosey's advertises itself as "Southern Taste, Up North," which I can certainly buy into. The menu consists of your usual barbecue suspects-- a meatfest consisting of ribs, pulled pork, brisket, chicken, turkey, and sausage, and well-known sides like collard greens, mac n cheese, cole slaw, and beans. The options don't spread much beyond that-- a few sandwiches and platters that consist of various combinations of the aforementioned items, as well as gumbo, fries, and BBQ nachos.

The restaurant is hidden in a tiny shopping center, seemingly a little out of place. Once you step in it's somewhat like entering a whole new world. A subtle smoky smell, lots of dark wood and no pretenses-- seat yourself, use paper plates and plastic forks, and hit up the fountain drink machine. The server brought us a little plate of crunchy pickle slices and spicy pickled pepperoncinis. For once, I was glad my boyfriend is a picky eater- all those pickles to myself! Just don't tell my cardiologist. 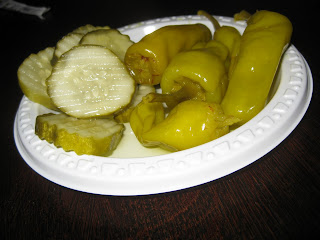 We both wanted the "Memphis" sandwich which is simple, but exemplifies the Memphis BBQ traditions-- barbecued meat coated with barbecue sauce and a heap of coleslaw, all on a kaiser roll ($6.75). However, for blogging purposes, I do not allow repetitive ordering (stern face), and called the sandwich for myself. It is served alone on a big plate, which was actually helpful because the sheer size forced me to deconstruct it. It was impossible to bite into, so I removed the top bun and used a fork and knife to tackle the heap of food. I selected pulled pork as my meat of choice, which was perfect- smoky, moist, some pulled strands alongside some chopped chunks. I love the warm meat/cool crunchy creamy coleslaw combination (that alliteration got a little out of hand). The bread was a little crumbly and dry, so the removal of the top half helped that problem, while the bottom of the bun soaked up all the meat juices and was a good little edible platter. 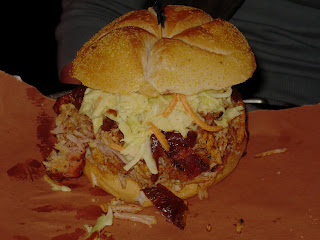 Since the sandwich comes alone, I also ordered a side of collard greens ($1.75) - one of my favorite Southern staples. A heaping styrofoam cup delivered the perfect portion of soft, well-cooked collards. Unfortunately, the major flavor was overwhelmingly salt. I managed a good amount of them, but knew I would probably be thirsty for the next two days. 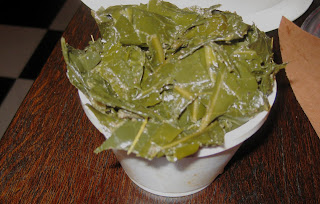 All of the meats are also available all alone- in 6 oz, 12 oz, and 16 oz sizes. The boyfriend ordered the pulled pork (yeah, we just couldn't manage diversification) in the smallest size, which ended up being a good single-sized portion ($4.75). Since the meat was plain (minus all the delicious meat flavor of course), he topped it with some barbecue sauce. A good sauce can really make a BBQ joint, and it was here that Rosey's definitely fell short. Their signature sauce is very sweet, not very spicy, and just tastes a little bit.. off. He commented that it even had a sort of fermented smell. One other sauce is available, and I liked it a bit better, although I can't exactly pinpoint the difference. Either way, definitely a negative aspect of the place. 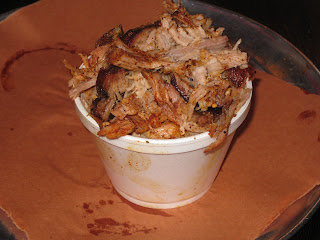 We also got a platter of BBQ fries ($2.50). I love thick cut steak fries, and these skin-on fat fries were right up my alley. If you're a fan of thin, crispy fries, these may not be for you. The "BBQ" aspect came from the signature spice rub sprinkled on top. I expected a bit of heat, but instead tasted a LOT of cinnamon. Cinnamon is a great addition to barbecue, but not as a top note... I ended up picking out the ones from the bottom. 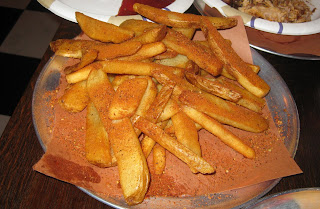 I'm glad I found a new barbecue place that is accessible, but we'll see if I can convince a return trip out of my dining partner anytime soon. We didn't try a huge variety of the menu, and we certainly saw some misses among the hits, but I'm still interested in trying out some of the other items (Hello, ribs!). At least I got my barbecue fix which might last until our next trip to Gainesville (or Memphis!).