December was a month chock full of traveling and hectic times at work for both of us. We've hardly spent any time in the city, and when we have been here, it's been almost impossible to make it out of the house to eat. With Christmas behind us, I spent the awkward Christmas-New Year period in Philly alone, trying to catch up at work. An out-of-town friend was nice enough to accompany me in what was probably my only activity that did not involve work, the gym, or my house. He suggested we venture over to Northern Liberties and try Silk City Diner.

Silk City is a strange combination of a train car (?) style diner and a dark, club-like bar. Veer right when you enter and you might never know there's another room attached on the back-- at least during normal dining hours. 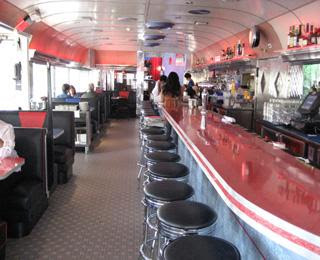 It's also gained a moment of fame by being featured on the popular TV show, Diners, Drive-ins, and Dives.

I was a little hesitant to try it out- the menu looks fairly simple, but after watching this video, I was sold. Too bad those empanadas are no longer on the menu...

If you're expecting ho-hum, typical diner food, this isn't the place for you. It's more of a casual gastropub, with simple twists on classic comfort foods. Nothing too out of the ordinary, but also nothing over $15 or so (my kind of place). They also have a fair number of daily specials, which always helps to mix it up for the regular customers.

I'm fairly certain my dining partner has a secret mission to try the wings in every restaurant in Philly, so that's what we started with. A huge pile of buffalo-style wings ($8) that were that perfect texture between fried and grilled, with a sauce that went a bit beyond your typical buffalo sauce. I couldn't decide exactly what the addition was, but it seemed more garlicky than I'm used to-- a good thing, in this case. Solid- I wouldn't write home about wings, ever- but they were tasty. 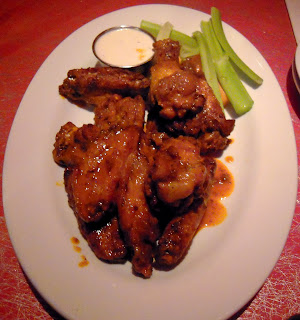 We had a lot of trouble deciding on entrees- lots of options seemed appealing- but my friend finally decided on the Hot Roast Beef Sandwich ($11). A fairly ubiquitous diner food, and a classic Philly one at that, the sandwich came open faced on a large, crusty baguette- much better bread than most diners would serve. Sliced cheesesteak-style meat was piled on the bread and topped with a hefty serving of melted Gruyere. It also came with two sauce choices- a simple au jus, and a horseradish-black pepper cream sauce. Pouring both on the entire sandwich certainly kicked it up a notch. All of the sandwiches are also accompanied by a pile of fries- fresh cut, skin on, just the way they should be. 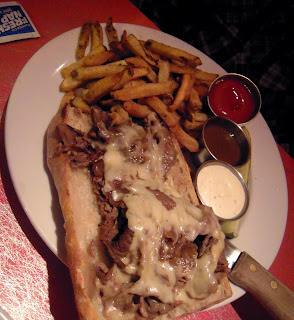 I chose an unusual dish- making a few substitutions to your classic Fish & Chips ($14), which the server declared "Fish & Spinach" as he placed it before me (without batting an eye). I really enjoy the fish part of this meal, but never want a huge pile of fried potatoes alongside it. Silk City has several vegetable based sides, and I went with the garlic spinach (and swallowed an additional $2 charge). The fried fish combines two of my favorite things- cod and tempura. Two generous pieces of thick, perfectly cooked-through cod were coated in a thin, crispy layer of freshly fried tempura batter, allowing the fish flavor to really shine without the soft, bread-like coating that fried fish often dies beneath. With a smear of tartar sauce and a squeeze of lemon, I was in fried fish heaven. The spinach was a great side- a stack of sauteed baby spinach with chunks of roasted garlic and just the right touch of butter. It evened out the heavier meaty fish, and gave me a good dose of veggies. 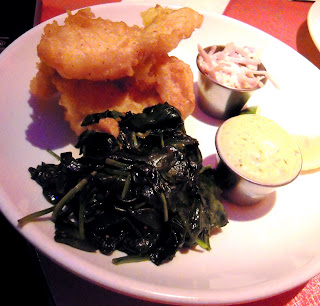 On the side, I enjoyed one of the best pieces of cornbread in the city ($3). Dense yet crumbly, the tall wedge of bread was complete with just a smattering of smoky jalapeno bits. Briefly grilled to help bring out the sweet flavors of corn, and then served atop a pool of honey, each bite was slowly savored. 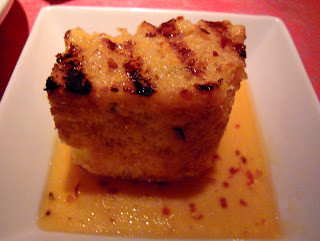 Silk City is certainly one-of-a-kind: great food in an interesting atmosphere, with your choice of dance club and outdoor patio (in the warmer months) just steps away. It's eclectic nature makes it a stand-out in a city full of good food, much deserving of its moment in the Guy Fieri spotlight!