Oh, Han. You look like you're twelve. You make expletive-filled jokes and blend in with your wait staff. 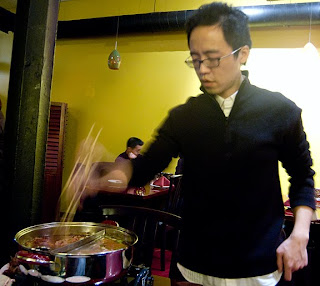 You also make RIDICULOUSLY good food. And with multiple Han Dynasty locations scattered across the Philadelphia area, a lot of other people seem to think so too.

A & I have been curious about Han Dynasty for awhile. Craig LaBan had only good things to say about the restaurant, but did note that most of the dishes are pretty high on the spice scale. A likes spicy food more than I do, and while I tolerate it and enjoy it in small quantities, the 20 course $25 tasting menu scared my tastebuds. However, A & I both noticed a blog announcement for a collaborative dinner with Chiang, David Ansill (of Ladder 15), and Sam Jacobson from Sycamore, a suburban restaurant we have yet to check out (not having a car makes these types of trips difficult). The concept was "Chinese-izing American food," which to me meant dialing down the heat- at least it would serve as a good intro to Han Dynasty. 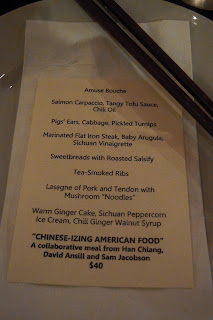 We reserved two spots at the 6 PM seating on a Monday, and were squeezed in between other pairs of diners at a longish table. The spacing was a little tight/awkward, but the restaurant is on the small side so I'm not sure how else they could have organized it. Thankfully we were almost immediately served the amuse bouche to distract us. I will preface this long descriptive post with saying we had NO idea what would be served at this dinner, so it was an adventure. The amuse bouche definitely took away any hesitations we may have had. A teacup of creamy Jerusalem artichoke soup was topped with a drizzle of chili oil. Seriously, this might be my quintessential perfect dish- cream, artichokes, and a punch of heat- just enough to prep our mouths for the two hours of spiciness to come. 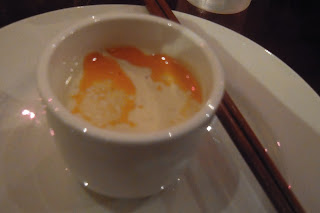 The first course- a take on salmon carpaccio- was also highlighted by chili oil. Thinly sliced salmon was topped with bits of green onion and pickled radishes, and finished with a drizzle of "tangy tofu sauce" (tasted like spicy sauce found on sushi) and chili oil complete with chunks of pepper. The presentation reminded me of Japanese okonomiyaki. Under all those rich and spicy accompaniments, the salmon didn't have a whole lot of flavor- it would have been a bit better if the salmon was smoked instead of raw- so it seemed a bit more like tuna. The smooth, cool texture of the fish was a comfort in the midst of the heat from the sauces. 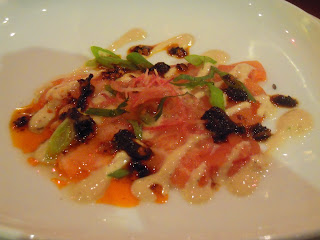 The next few dishes were served family style- two big plates of food for the eight people at our table, as well as unlimited bowls of white rice. As our second course, the pigs ears' were probably our least favorite dish... for obvious reasons. The meat was cut into thin strips which had a striped effect- a snappy cartilage layer sandwiched by a softer "meat." The flavor was great- a spicy sweet taste that was reminiscent of Peking duck, interspersed with a vinegar note from a mix of sauteed cabbage and pickled turnips. We just couldn't get over the tendon-y feeling and crunchy aspect of the ears. 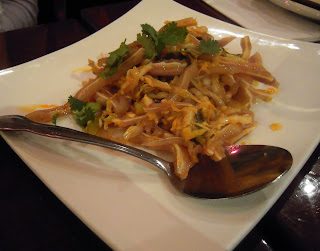 The chefs returned to a more familiar ingredient in the next course- marinated flank steak atop a bed of baby arugula and some red pepper strips tossed in a subtly spicy viniagrette. The flank steak was cooked to a perfect medium and had an incredible velvety texture. Smoky flavors enriched the beefy salty steak richness that we so rarely indulge in. I did wish there were some sort of crust on the outer edge- it was just ultra soft all over which confused my mouth. The arugula salad provided some much appreciated greens- the "baby" greens were less spicy than "adult" arugula, which allowed the Sichuan dressing to shine through. This was definitely an American-esque dish that anyone could enjoy. 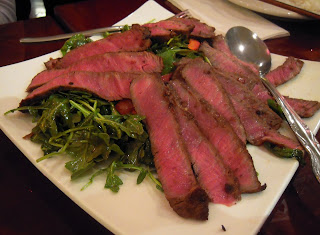 Our fourth course had a mixed review. Big chunks of sweetbreads were... fried? I'm not sure how these were cooked, but they ended up being on the dry side- almost like badly cooked tofu with the outer "skin." The sweetbread taste isn't particularly flavorful, so thankfully there was a hefty dollop of what can only be described as General Tso's sauce... a sweet and spicy sticky sauce that can make anything taste amazing. Salsify (a flowering plant that looks like a weed) stalks were shredded and roasted- and I think I have a new favorite starch. They tasted like french fries but with a firm texture similar to asparagus. Salsify is known as the "oyster plant", contributing a salty flavor without the raw seafood aspect. 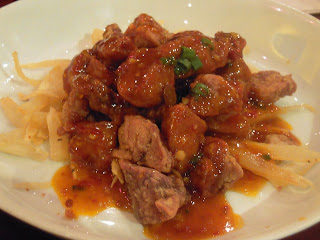 Next up was more meat- tea smoked ribs. Just one plate this time for the whole table- and served with a spoon. I took my own liberties and snagged a rib using my hands, but I did notice a guy spooning himself a rib. Very weird. The texture was like beef jerky- on the dry side- and the flavor was incredibly salty- definitely did not want more than one of these. Certainly a new and interesting take on ribs. A side dish of oily potato strings was also served. Oily somehow worked in their favor, but the chunks of dried chili peppers didn't provide much spice (though I didn't risk obliterating my tastebuds by eating one). So.. sort of like an oil-drenched potato stick. Not bad. 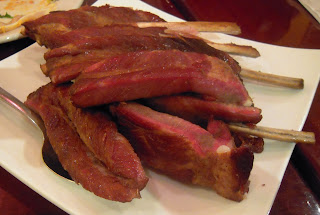 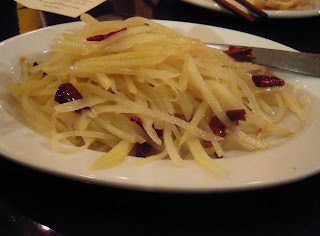 The last savory dish was individually plated "lasagna." My pasta aversion was appeased by the replacement of noodles with thinly sliced mushroom- using some type of mushroom that can be sliced into paper thin palm sized sheets. Mild blobs of pork layered between the mushroom, which sat upon a pile of braised Chinese greens. Chili oil once again brought the spice to the table, providing some flavor to an otherwise somewhat bland dish. I loved the concept of this dish but wish the pork had been cooked in a way that didn't strip it of all flavor and texture- it was just sort of mushy. It was also practically impossible to eat with chopsticks- lasagna requires a knife. A used each mushroom slice to wrap up the contents on top of it- converting her lasagna to ravioli. 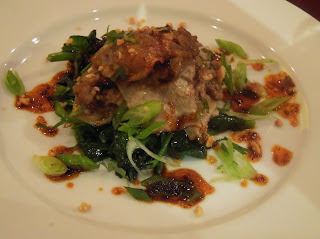 Whew... I'm getting full all over again writing this post. However, Han & co. saved the best for last, at least in our opinion. Though some of the other diners seemed turned off by the dessert course, we were obsessed- warm ginger cake with peppercorn ice cream. The cake was incredibly dense- A compared it to fudge. The ginger flavor was super intense, complete with bits of pickled ginger dispersed throughout, as well as plump raisins. The ice cream was also a completely new experience- cold creamy.. peppercorns? It was baffling at first taste, but grew on me and by the end I was scraping up the drippings from my plate. The honey ginger sauce had a pinch of chili flakes and provided an extra sweet "juice" that was soaked up into the cake. It also left a lingering taste that was accompanied with a pleasant mouth tingly "buzz." Overall, so unique and so delicious. 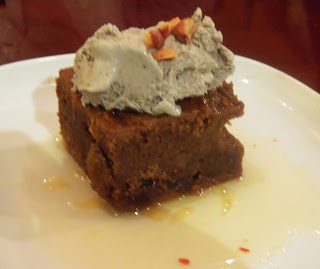 We gladly forked over our $40/person and gritted our teeth against the wind that blew us home. The entry way was packed with the 8 PM seating, though this didn't seem to rush the chefs or servers. Overall the food seemed to be a good balance of Chinese and American- General Tso's sweetbreads? Tea-smoked ribs? The conceptualization of the entire meal was spectacular (minus the pigs' ears. That was straight Chinese weirdness... no offense). I think this was a superb intro to Han Dynasty, and we can't wait to go back and try out the truly authentic stuff.