Sometimes, we are a bit late jumping on the bandwagon. In the case of Philadelphia Chutney Company, we're about four months late. Opening in late fall of 2010, PCC has received a fair amount of press, particularly from the blog community. Even so, it was never something we were dying to eat. Odd, considering our love for any food that is Indian. Looking for a new-to-us "cheap eats" restaurant as close to our home as possible (this weather has been BRUTAL!), we quickly decided on the Chutney Company. 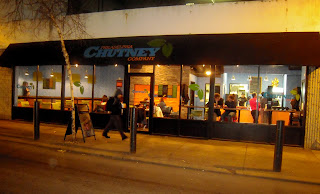 The restaurant is divided like many fast food places-- menu and ordering on one side, seating on the other. The menu is fairly straightforward, but doesn't offer a lot of English translations, leaving me to guess at some of the items I knew I wanted. We made our selections, grabbed a couple of self-serve waters (from a big jug containing cucumbers and lemons) and found a seat. We only waited a few minutes before our appetizers were ready to go, and we were called by name up to the counter.

One of our favorite Indian dishes is the samosa, so it was a no-brainer selection. An order of two generous pockets of fried dough ($2.50) were stuffed with spiced potatoes and tamarind, and came with a side of (what we think was) tomato chutney. 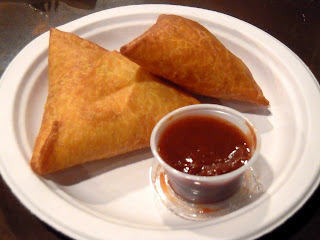 The dough was thin, crispy, and not too greasy, a perfect edible container for the flavorful potato filling. The chutney was surprisingly sweet, contrasting the savory whipped innards. 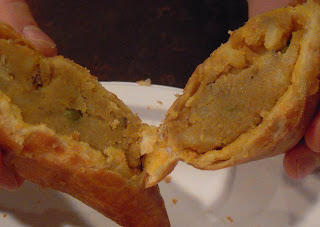 Two of the other appetizer options consist of cakes made from lentil flour, available either fried or steamed. Even though we had chosen the fried samosas, we doubled up with the fried lentil cakes, or Medhu Wada ($2.50). Another great "cheap eats" deal- three large donut-like cakes of fluffy lentil flour and bits of vegetables served with our choice of chutney. It's hard to describe these without continuing to draw the donut connection- just without the sugar. We added a bit of that back with the mango chutney, our overall favorite of the evening. Thick, sweet, and jam-like, I wanted to spoon it up. 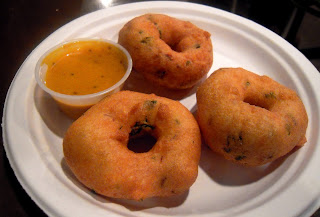 Regardless of the restaurant's namesake, the main attraction stars the dosas and the uttapas- two variations of a similar item. Both start with a sourdough base produced from rice, with the dough spread thin and resembling a crepe for a dosa, and thicker and chewier (more of a classic pancake) for the uttapa. Toppings for the dosas/uttapas (as well as the entire menu) are all vegetarian, including various vegetables and vegetable-based faux meats (chicken and tuna).

I chose a classic Indian version, the uttapa topped with potato masala, grilled veggie chicken and spinach ($8). The pancake foundation was thick enough to be cut into slices and eaten like a pizza. Doughy, chewy and flexible, with an ever-so-slight sour flavor, it was a great base for the soft, spiced potatoes and "grilled chicken" (which seemed fried, and didn't quite resemble chicken). The sparse spinach was steamed to the point of being plastered to the rice dough and hardly recognizable, but overall I was in Indian food heaven. The flavor profile was similar to the samosas, and with the addition of a thick, spicy curry chutney, it was unbelievably delicious. 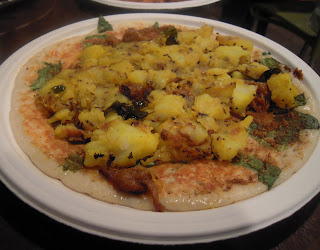 J took a different route, trying a simpler roti chutney wrap. Two thin wraps were stuffed with chopped romaine, cucumber, the faux chicken and dressed inside with the mango chutney ($6). Served cold, it seemed more of a simple lunch than a satisfying dinner. However, the outer roti wrapper was buttery, flaky and chewy, a much improved version of a classic tortilla wrap. The mango chutney performed just as well inside the wrap as on our lentil cakes, sweetening each bite. 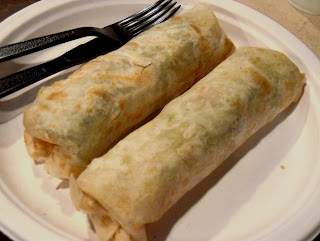 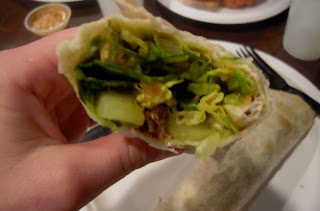 We left quite content- a very filling, satisfying meal that soothed our never-ending desire for spicy, flavorful Indian eats, all for under $20 total. With only slight food babies and subtle lingering food odors on our clothes, I'd choose this over an all-you-can-eat Indian buffet any day. Bandwagon, we're on.