Since A & I are known to be "foodies" in our circle of friends, we've received several cookbooks as gifts, which have provided delicious recipes and inspiration for past and future meals. One of our most recent acquisitions is a book titled simply "Tapas." Tapas are a great way to try a wide variety of dishes- good for those who have a hard time making decisions. Additionally, many of the recipes in this book would make great appetizers for a dinner party. 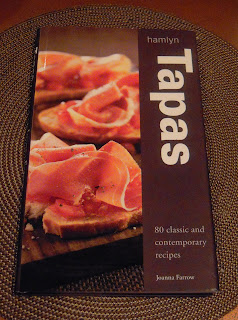 Nicely organized into sections based on the primary component of the dish (ie cheese and egg, fish and seafood, etc), the book is full of gorgeous pictures of almost every dish, as well as some "step-by-step" pictures to guide you from start to finish. Additionally, most of the recipes only have 3 or 4 steps of instructions, breaking the work into manageable sections without looking overwhelming. 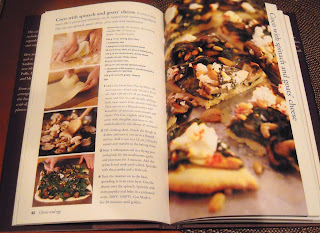 We were supposed to have a friend over for tapas mid-week, but the fiasco involving replacing the glass in our enormous front bay window had the glass contractor working in our house three nights this week. Therefore, we decided to spend a Friday night in, making and eating three tapas dishes from the book. The only thing better than enjoying tapas is enjoying tapas in sweatpants and a Carrie Underwood t-shirt. Classy. 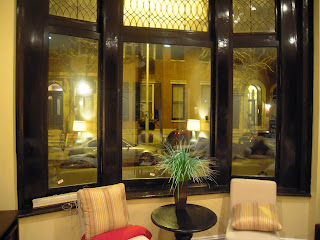 The first "course" was Mushrooms with broad bean puree. The recipe makes enough for 6, so we cut it down significantly. We used two large portobello caps, adding a bit of butter, crushed garlic, and salt and pepper to the upside down shrooms before baking them in the oven for 12 minutes at 400F. Instead of broad beans, we used frozen edamame, nuking them for a few minutes before adding them to the food processor. A few chopped mint leaves, 2 oz of soft goat cheese, three stalks of green onions (green part only), the juice from 1/2 of a lemon and a pinch of salt also went into the processor, blending until smooth. 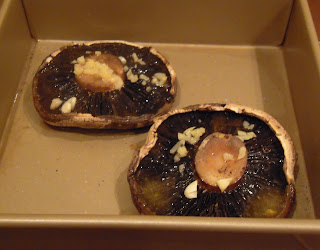 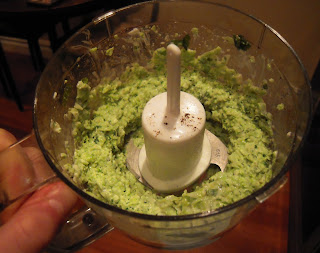 When the mushrooms are soft (and smelling delicious with the garlic and butter), blob the mixture onto the cap, add a few chopped green onions and whole beans as well as a grate of lemon zest and return to the oven for 5 minutes.

Simple to make, yet an explosion of complex flavors in every bite- the meaty mushrooms, creamy goat cheese, and a hint of acid from the lemon- every component of the dish played a role in the overall flavor and texture. A great start to the meal, this was also our unanimous favorite. 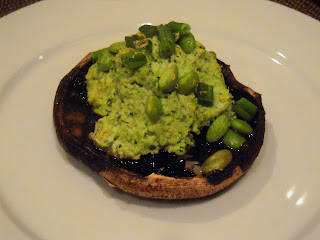 However, the second dish certainly didn't disappoint- because you can't really go wrong with pizza. Called "coco," this dish required a bit more prep as I had to make dough from scratch. Flour, salt, and a packet of yeast mixed with warm water- I substituted 1/3 whole wheat flour and eyeballed the rest- my favorite way to make bread. After kneading the slightly sticky dough for ten minutes (chatting on the phone with my mom kept me entertained!), I let it rise for about 35 minutes in a greased and covered bowl on the stove top. Ambient heat from other cooking activities shortened the rising time. 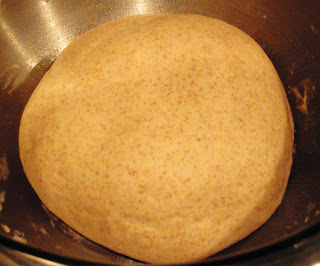 While the dough was doing its thing, I made the topping for the pizza. A sauceless version, this consisted of sauteing sliced garlic and mushrooms and a large handful of pine nuts for about 5 minutes, then adding fresh baby spinach until wilted. 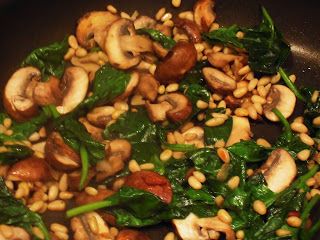 I used another new kitchen implement- a Silpat to cook the pizza. I spread out a few tablespoons of cornmeal (we like the crunchy texture it adds to the bottom of the crust) and rolled out the dough- the Silpat was amazing and made it SO easy to form the crust. Spread the mixture out, add dots of goat cheese and a dusting of sweet paprika, and bake for 15 minutes (conveniently also at 400F). The finished version looked about the same as the unbaked- the crust didn't change color or size much, so I had to poke it a few times till I decided it was done. 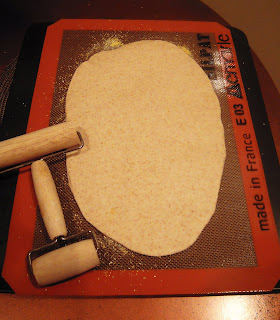 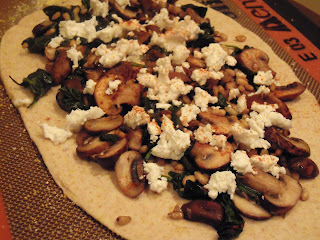 Though it could have used a bit more spinach (that stuff shrinks down about 99%), the slightly crispy dough was a great base for toasty, crunchy pine nuts and more delicious mushroom/goat cheese. The fact that we could share ingredients between the dishes was helpful- the book is good about repeating ingredients to make grocery shopping a bit more efficient. 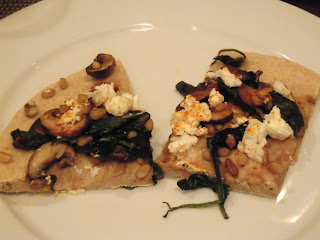 Our final dish came from the seafood section- Prawns with garlicky crushed beans. We were actually able to make most of the dish the night before to cut down on our stovetop time. Chopped onion, two cans of white beans and a splash of chicken broth were cooked together for a few minutes, followed by a mashing of the beans- we used our potato masher but a fork would also do the job. 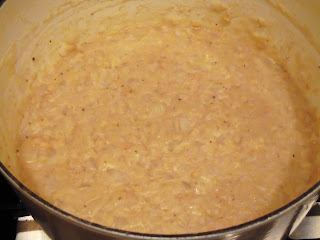 We reheated these in the microwave for simplicity while A made the shrimp part of the dish. A half pound of peeled, deveined shrimp were quickly cooked in a frying pan, and then joined by a bit of tomato paste, a pinch of oregano and paprika, honey, and some water to thin out the paste. 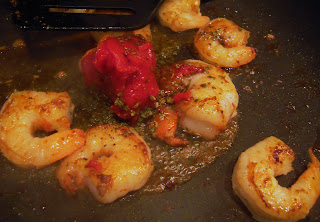 Top the beans with the shrimp and enjoy. The creamy beans had a sweet flavor from the white onions we used, accented by the sweet paprika and the earthy oregano. Shrimp is one of my favorite proteins, so I gladly accepted a giant one from A when she decided she was too full. Next time I would tone down the oregano- it was definitely the strongest flavor and could have shared the spotlight a bit more with the more mild shrimp and beans. 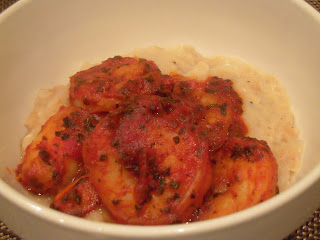 Surprisingly, these three dishes- enjoyed slowly and one at a time- had us super stuffed. They were all pretty tasty, and between the two of us, we teamed up well to assemble each of them in a pretty short period of time. Most of the dishes could be at least partially completed ahead of time to minimize cooking time for a dinner party. Additionally, many of the ingredients are "flexible"- edamame instead of broad beans, green onions instead of chives, shrimp instead of prawns, etc. Overall, we were very pleased with our foray into tapas making, and will definitely be using this cookbook in the future.

Cons: The book was printed in England, so ingredients are measured in grams and mls, so some rather rough conversions are necessary
Posted by Julianne at 1:32 PM