It's that time of year again in Philly- Restaurant Week! RW has its fans and it has its haters, and J and I tend to wobble in between. We haven't taken part in the citywide $35-for-a-3-course-dinner in a couple of years (I explain why in this admittedly long-winded post), but we are still intrigued by the lunch special that is now offered ($20 for 3 courses, but only at some of the RW restaurants). Spotting Zahav as a lunch option for this year, I knew I had to go. Saturday's are annoyingly excluded, and I work on the opposite side of the city during the week, so a Sunday lunch it was.

My friend and I arrived right on time, and were met by a very full house. The dining room is open and spacious, lending itself to a fairly large capacity, but we still had to wait about ten minutes for a table to clear. This set the stage for the speed of service the rest of the meal-- even though it quieted down after a bit, our lunch still took two hours total. I love a long lunch and leisurely eating, but it was a bit too long. 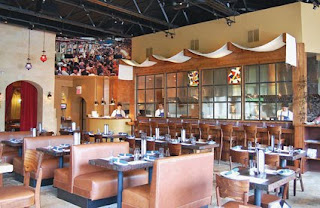 Any meal at Zahav should start the way the RW menu begins: with house-baked laffa (like a thin, airy pita or naan) and hummus, and salatim, or a selection of cold salads. The laffa was served as a single piece, which my friend and I shared by ripping off a bite or two and dunking it into the bowl of hummus. The bread is fresh and light, and is a great way to get that delicious hummus into your face. Best hummus I've ever had, I might add. My friend said he would have preferred more flavor- it is a simply done dip, with chickpeas, tahini, good quality olive oil and little else- so if you're looking for a garlic kick or a bit of spice, you won't find it here. 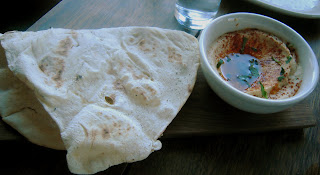 The salatim for lunch gives you four portions of salad (for dinner it is six or eight), elegantly served in small bowls placed in a two-tiered rack. We loved two of the options: a crunchy, spicy cabbage salad with tomato compote and dill, as well as a fresh and creamy fennel salad. 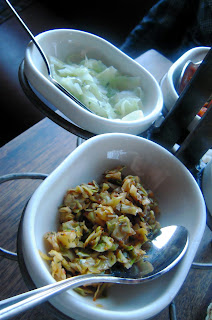 The other two options were also good, but with slightly less flavor. The soft pickled carrots with parsley could pass as baby food (not necessarily a complaint), and the chopped squash with sesame had a sort of odd texture and flavor that I couldn't quite confirm was pleasant. Regardless, as an almost "complimentary" starter (there were four total courses), the laffa, hummus and salads get you started on the path of delicious Israeli eats. 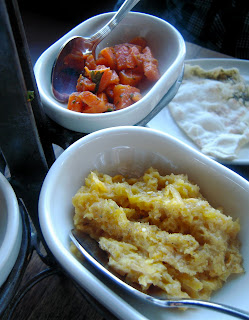 The second course consists of one "mezze" or plate, similar to an appetizer in both size and construction (RW dinner diners choose two). This course provides the most option, making it quite difficult for me to decide. Grilled haloumi?? Their famous fried cauliflower?? They all sounded great, but I opted for the House Smoked Salmon. It was served as a salmon salad, with chopped smoked fish mixed with labenah, a thick Middle Eastern yogurt. It was served atop a base of sweet roasted yellow beets and apples, and sprinkled with a generous, but not overwhelming amount of chopped dill. 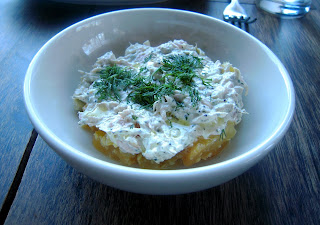 I also sampled my friend's choice of the potato latke, a super thick, dense pancake made almost completely from shredded potatoes and perfectly fried- evenly cooked through, and crispy on the outside. Smoked, chopped liver is pureed and generously portioned over the latke, finished with a few skinny pickled baby carrots. The liver was very salty and... well, I can't say I love liver (unless it's from a fattened duck), but it represents a classic Israeli/Jewish dish. 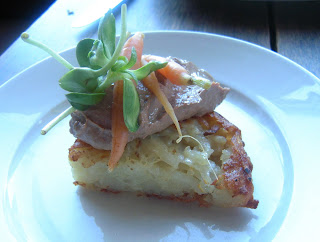 The third course is titled "al-ha'esh," and consists of several meat (and two vegetarian) options, all of which are cooked over coals (I believe on skewers), and then sliced and served with various accoutrements. I chose a second fish dish, the crispy branzino. As soon as it was placed before me, I could smell the strong smokiness of the coals, still lingering on the two small pieces of skin-on fish. Beneath this lay tiny slices of local gold potatoes and softened peppers, coated in olive oil and poppy seeds. I don't typically pair fish and potatoes together, but the lightness of the thin slices worked well. The fish was soft and flavorful, with a great crispy crunch from the skin (definitely eat this part!), but the overall dish didn't scream "Israel" to me. 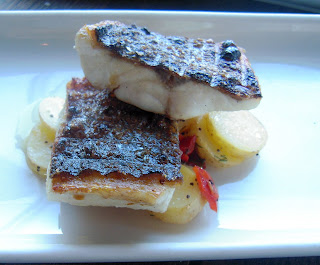 The small portions and long stretch between each course left me with plenty of room for dessert. With only three options to choose from, I had no problem picking the Hazelnut and Date Rugelach (which I learned is pronounced "rug-uh-luh"). Two dainty twisted pastries with a croissant-like texture were filled with chopped hazelnuts and dates, and were soft and warm as if straight from the oven. On the side was served a tiny glass of a pink liquid topped with foam. I had no idea what this was but dug in anyways. Delicious! Known as sachlab, this authentic Middle Eastern drink is concocted from milk, sugar, orange flower water, blended nuts and coconut, and served warm. A perfect ending to the meal, cutting out my lingering desire for a warm cup of coffee. 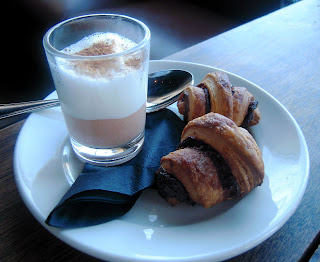 If you find yourself unsure of where to eat during RW and are a semi-adventurous eater, head directly to Zahav. Both lunch and dinner options are worth far more than you will pay, you'll be out of the grasp of crazed Garces and Starr fans, and you just might learn something about a new-to-you food. You'll even walk away with a $10 gift card good for any of Chef Michael Solomonov's local restaurants.