We received our first CSA delivery last week (whoohoo!) and it certainly came with an interesting assortment of veggies right off the bat. We found a few good recipes for mizuna (this salad recipe is a must-eat) but were at somewhat of a loss for what to do with a few stalks of rhubarb. A found a couple of interesting savory recipes that called for a quick toast in the oven. However, since it didn't really fit in with our menu plan for the week, we decided to try our hand at a more typical recipe- rhubarb tarts.

We prefer making individual sized desserts- easy portion control and provides the option of popping a few in the freezer if we're not going to be around to consume them. With an impending weekend in Boston, the use of our tartlet pans was a necessity. 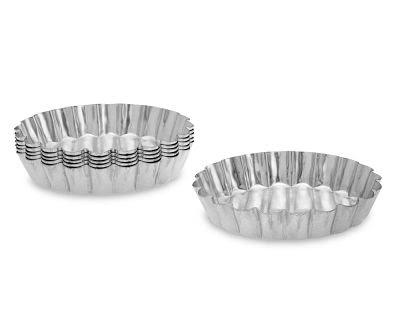 The construction of these tarts was relatively haphazard, somehow piecing together three different approaches. We didn't want to make a pastry dough, so we sought out an almond-meal based crust instead- we eventually landed on this recipe for inspiration. First, grind 1.5 cups of sliced almonds in a food processor until it becomes a coarse meal. 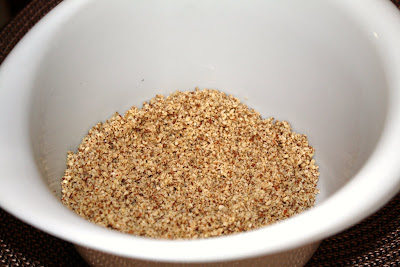 To this, we added the rest of the dry ingredients: 1/3 cup oats, 1/4 t salt, 1/4 t baking soda. In order to make a cohesive dough, add 1/4 cup of melted butter and 1 T agave nectar to sweeten the deal. Once everything is well combined, press the sticky crust into cooking spray-coated tart pans. The crust can be as thick or thin as you'd like and you can either press the dough against the sides (to make a true tart) or not (to make more of a layered streusel). This recipe makes enough for about six 4" pans. 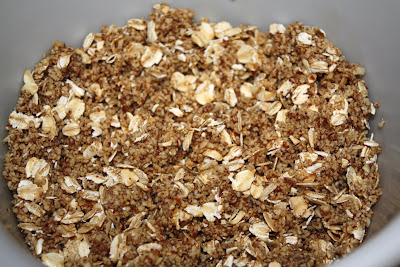 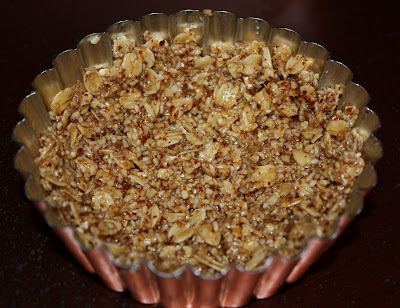 A popped these in the fridge for a half hour so she could work on dinner simultaneously. The time in the fridge helps the ingredients meld together a bit better and "set," but is not necessary. Additionally, we prebaked our crust for 10 minutes at 350F since we made ours rather thick. A thinner layer or true pastry dough won't need this step either. 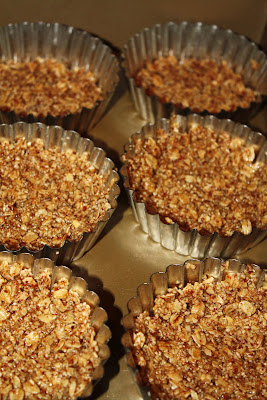 We went a much simpler route for the filling, following a basic rhubarb pie recipe. Simply chop the rhubarb as you would celery and saute it over medium heat with 3/4 cup sugar (or more or less sugar depending on how sweet you like your treats) and a teaspoon of vanilla for about ten minutes. We had five large stems of rhubarb which equated to about two cups once chopped. As the rhubarb cooks, it emits lots of water, mixing with the sugar to create a really nice pie filling texture. 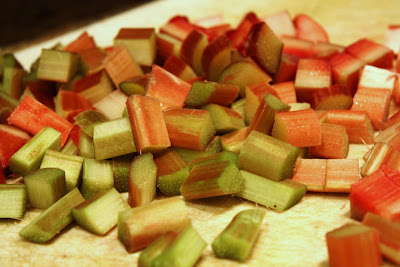 While the rhubarb was cooking down, A mixed together a streusel topping that she oftentimes throws together for a quick dessert (top a chopped apple with a few tablespoons of this and microwave for a few minutes... 3 minute apple pie). This time she incorporated more of the almond meal to keep the flavors and textures consistent. Combine 1/2 cup almond meal, 1/2 cup oats, and 1/2 cup brown sugar. Chop 2 T of cold butter into small cubes and fork this into the dry mixture along with a tiny pinch of salt. 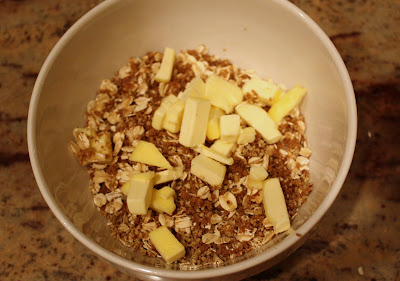 When the rhubarb is cooked down, spoon about 1/4 cup of the mixture over each crust. Sprinkle with 1/4 cup of the streusel topping mixture. Bake at 350F for 25 to 30 minutes, or until the topping caramelizes a bit. Cool on a wire rack. 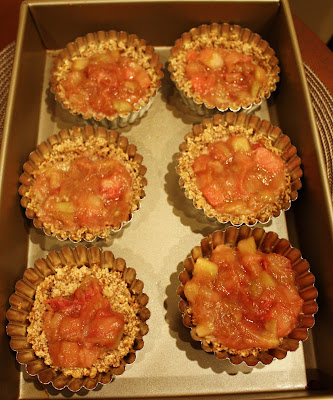 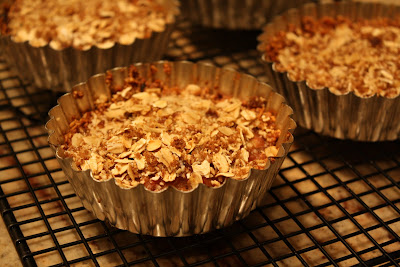 I prefer my pie-type desserts eaten cold, particularly this rendition. The crust and topping have a nutty flavor base, amplified by the sweet and salty undertones. The rhubarb itself is pretty tart (no pun intended) which, when served warm, is the dominant flavor. 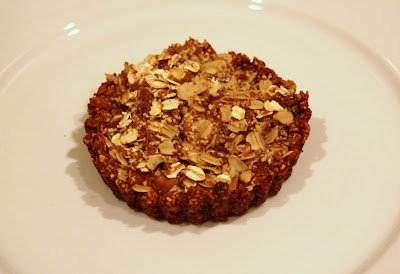 Even though we made up this recipe as we went along, it turned out pretty well. We used up some ingredients that we had on hand, and got three nights worth of dessert out of the deal. This is a great example of how our CSA really has us reaching our creative limits in the kitchen. Can't wait to see what next weeks haul has us making!
Posted by A and J at 3:57 PM